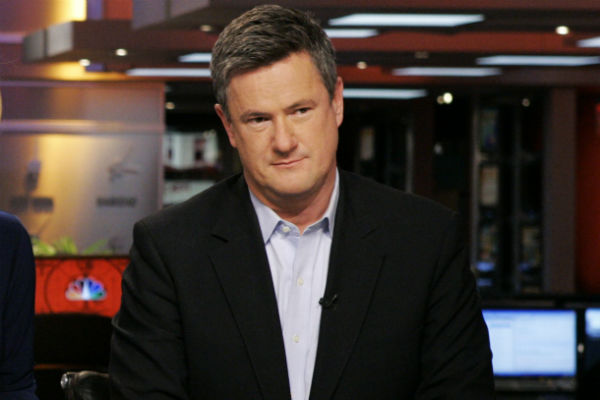 The real bridge scandal that may lose Christie the chance to be a GOP contender in 2016—not the G.W. Bridge lane closure fiasco of last September but an earlier one related to a different span, the Pulaski Skyway—just isn’t news, according to MSNBC’s Joe Scarborough. The TV motormouth, who rose to prominence in 1994 as part of Newt Gingrich’s Contract-on-America right-wing revolt that took control of the US House of Representatives, is annoyed over the fact that the media are paying attention to the panoply of scandals surrounding Christie, including the GWB; the tangle of conflict-of-interest scandals around the Port Authority and its disgraced chairman, David Samson; and a series of Christie money grabs that looted the PA to pay for New Jersey road projects.

But Scarborough’s annoyance is misplaced. In his MSNBC rant, Scarborough called The New York Times’ coverage of the Pulaski Skyway a “scam” and something that “outrages conservatives.” In fact, however, the Times, which reported yesterday on its front page about the Pulaski Skyway story, is late to the party, since that story has been reported extensively by investigations from the Bergen Record and by Main Justice, and, earlier this month and, back in May, by Christie Watch, too.

So Scarborough ought to be criticizing the Times for being slow to report what is, in fact, the issue that might bring Christie down: namely, that both the Securities and Exchange Commission (SEC) and the Manhattan district attorney are investigating the legality of Christie’s apparently illegal diversion of Port Authority funds to rebuild the Pulaski.

Back in 2011 Christie cancelled a long-planned tunnel project linking New York and New Jersey, and he was determined to use the $1.8 billion that the PA had allocated for the tunnel to pay for internal New Jersey road and bridge projects, including the Pulaski Skyway. The alternative was a gas tax increase—and raising taxes, any taxes, is the kiss of death for a Republican presidential hopeful.

But, as the Times notes, Christie ran into opposition from PA lawyers:

Again and again, Port Authority lawyers warned against the move: The Pulaski Skyway, they noted, is owned and operated by the state, putting it outside the agency’s purview, according to dozens of memos and emails reviewed by investigators and obtained by The New York Times. But the Christie administration relentlessly lobbied to use the money for the Skyway, with Mr. Christie announcing publicly that the state planned to rely on Port Authority funds even before an agreement was reached. Eventually, the authority justified the Skyway repairs by casting the bridge as an access road to the Lincoln Tunnel, even though they are not directly connected…The accuracy of this characterization is now a major focus of the investigations, according to several people briefed on the matter.

As already noted, much of what the Times reported—the objections by PA lawyers, the pressure from Christie administration officials on them to find some basis to approve the funding, the decision of the SEC and the Manhattan DA Cyrus Vance to investigate—has already been reported by the Bergen Record, Main Justice, and Christie Watch.

The Bergen Record, in March, first printed excerpts of numerous memos and emails between PA lawyers and Christie administration officials in which PA lawyers warned that the Pulaski Skyway was not part of the PA’s jurisdiction. It was in fact an access roadway for the Holland Tunnel, which was built before the PA and roads leading to it are not entitled to PA repair funds. Christie’s point man at the PA, deputy executive director Bill Baroni, put the screws to PA lawyers, as the Record noted:

Chris Hartwyk, former deputy general counsel at the Port Authority, wrote that justifying the projects by claiming the roadways were connections to the Holland Tunnel, as the governor previously stated, would be “difficult if not impossible” because of the wording of existing laws. The Holland Tunnel was already built when the Port Authority inherited it in 1931, so the law didn’t permit the Port Authority to build approaches. “It’s evident to say, but we gotta figure this out,” Baroni, who was looped into the discussion, wrote the same day.”

So, as the Record noted, PA lawyers christened the Pulaski Skyway and related roads as access highways to the Lincoln Tunnel, which was entitled to PA funds, even though that tunnel is miles from the Skyway. In an editorial on the subject yesterday, the Newark Star-Ledger notes that one of its reporters asked cab drivers at Newark’s airport if they’d use the Skyway to get to the Lincoln Tunnel, with hilarious results.)

The Times article does expand on the quotes and excerpts from e-mails between PA lawyers and Christie administration officials showing the pressure exerted to get the PA to provide a justification for the funding, adding new details on the role of two other officials:

In meetings, emails and letters between November 2010 and February 2011, administration officials including James Simpson, the New Jersey transportation commissioner, and Richard Bagger, the governor’s chief of staff, continued to press the Port Authority for funding. Mr. Baroni wrote that Port Authority lawyers could find “absolutely no support” for repairing the Skyway.

The Times reports that among those subpoenaed by Vance was Jeffrey Chiesa, who was Christie’s chief counsel, when the PA lawyers were being pressed to find a legal reason to fund the Skyway. But the Times doesn’t mention that later as Attorney General he signed off on other papers making clear that the PA was the sole funder of the Pulaski repairs.

And while the Times notes that the PA memos questioning the legality of the PA-Pulaski deal were given to Deborah Gramiccioni, then the director of the governor’s authorities unit, they didn’t report that she too has been subpoenaed. Gramiccioni is now deputy executive director of the PA, picked by Christie to replace Bill Baroni, after he was forced to resign for his role in the GW Bridge lane closures. She told the Times that “the administration ‘did everything in our power’ to avoid placing pressure on the Port Authority by asking the attorney general’s office to work directly with agency lawyers.”

“We’re asking more questions than ever before, and that is taking a number of these authorities by surprise,” said Gramiccioni, who talks in rapid-fire bursts punctuated by wide smiles. The result? “Angry defiance has become the norm in my world…” Gramiccioni is most like her boss in one way: She relishes a good rumble. “I have very thick skin, I’m prepared for a fight, and I know how to go on offense when necessary,” she said. “I go to sleep at night knowing the next day is going to be another battle. And I look forward to it.”

In its editorial, the Star-Ledger concludes:

But Christie was following his own road map. This was all part of a grand plan to make him into a major player in Republican politics. Yet once again, his big ambition may have led to a big mistake.