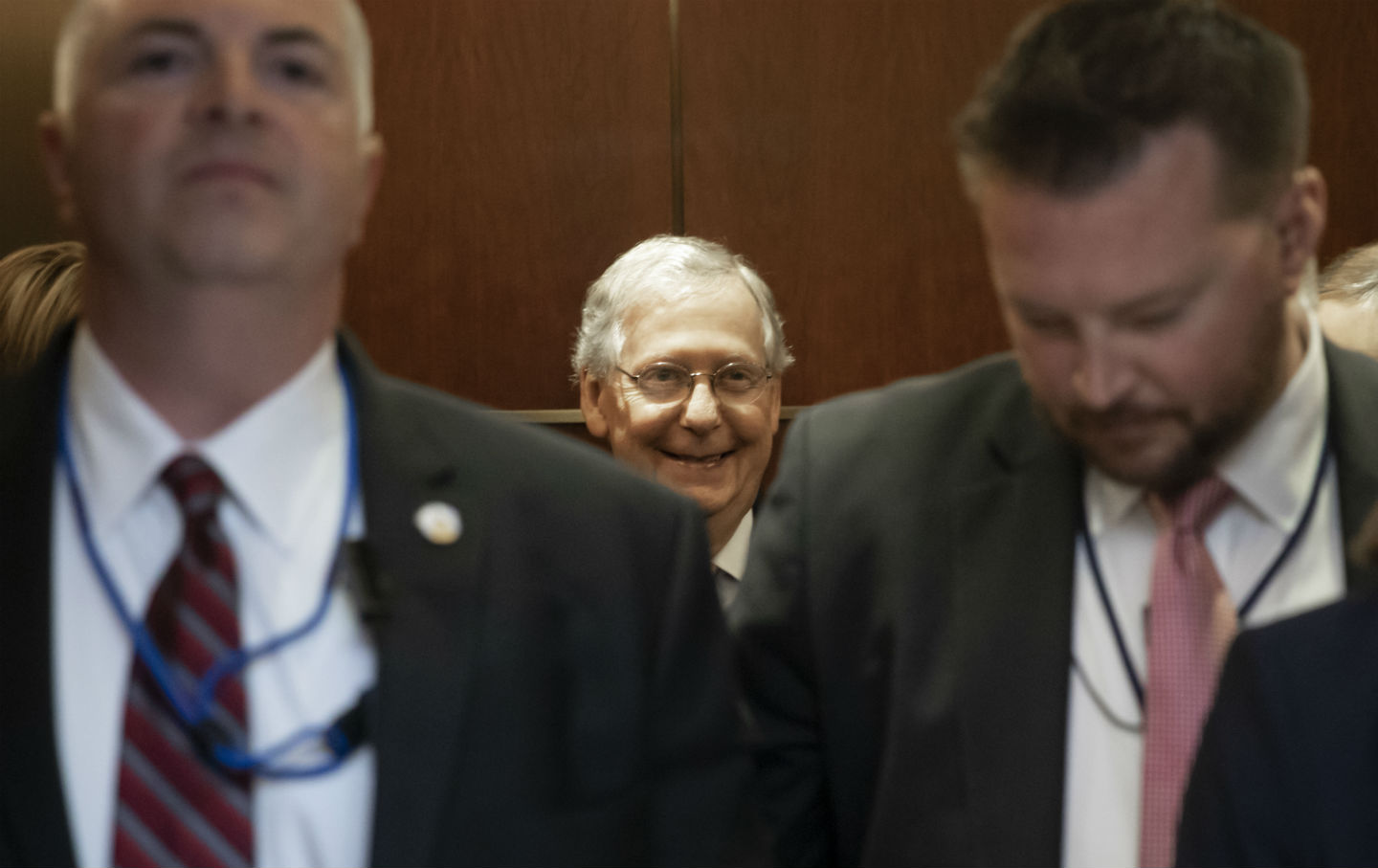 On the left, the notion that changing demographics offers the Democratic Party an opportunity to forge an enduring governing coalition is pretty controversial. But the conservative movement clearly embraces it, whether or not they say so out loud.

Ever since the “Emerging Democratic Majority” thesis became popular, Republicans have worked tirelessly to insulate themselves from democratic accountability. Rather than pursuing a policy agenda that might enjoy broad public support or adapting to an increasingly diverse electorate, they’ve engaged in relentless efforts to suppress the vote, implemented “extreme gerrymandering” schemes, opened up a river of undisclosed campaign cash, and, most consequentially, weaponized the judicial branch.

At the federal level, Senate majority leader Mitch McConnell has led this campaign with brutal effectiveness. “One of my proudest moments was when I looked at Barack Obama in the eye and I said, ‘Mr. President, you will not fill this Supreme Court vacancy,’” he bragged in 2016 after blocking Merrick Garland, along with dozens of Obama’s lower-court nominees. But it’s the confirmation of Brett Kavanaugh, a nakedly partisan judge, which may be the culmination of his long effort to insulate his party from the wrath of voters. It’s the whole game. He’s racked up a lot of wins, and Kavanaugh is the biggest one.

This nomination process was a complete sham. Two recent lawsuits revealed that there are “potentially thousands of Brett Kavanaugh’s White House emails and other records related to the Senate hacking scandal from early in the George W. Bush administration and other controversial subjects that have not been disclosed to the Senate,” according to Yahoo News. The New York Times reported that White House Counsel Donald McGahn II, who pushed through Kavanaugh’s nomination on his way out of the White House, told Donald Trump that the “wide-ranging [FBI] inquiry” into accusations of sexual assault against Judge Kavanaugh by Dr. Christine Blasey Ford that Trump promised to conduct “would be potentially disastrous for Kavanaugh’s chances of confirmation to the Supreme Court.” In the end, the FBI interviewed nine witnesses. Kavanaugh and Blasey Ford were not among them.

A truly “wide-ranging inquiry” might have unearthed corroboration of the sexual-assault allegations against Kavanaugh, and it almost certainly would have demonstrated that he lied repeatedly to Congress. Even as Republicans railed about “due process,” they made certain that none would be forthcoming before Saturday’s final vote.

Mother Jones reporter Ari Berman, author of Give Us The Ballot: The Modern Struggle for Voting Rights in America, told me that as a lower-court judge, Kavanaugh ruled that states don’t need to demonstrate in-person voter fraud to justify strict-voter ID laws, wrote “opinions making it easier for foreign interests to interfere in an election,” and was “hostile to any regulation on Big Money in politics.” According to Berman, Kavanaugh’s judicial record suggests that he “has an ideology of making it easier for special interests and corporations to buy an election and making it harder for minorities and low-income people to vote in an election. And I think that is the ideology that the four other [conservative] justices have, and I’m very worried that we’re going to have a five-member majority on the court that is down-the-line hostile to voting rights for decades to come.”

Justice Elena Kagan said on Friday that she worries the Court will no longer have a swing vote. That role now falls to Chief Justice John Roberts, whose much-ballyhooed institutionalism and concern for the legitimacy of the Court shouldn’t obscure the fact that he’s always been a movement conservative. The Court is poised to become a Republican veto on any and all Democratic priorities, from environmental protections to reproductive rights to expanding public insurance coverage. But Mitch McConnell’s most consequential and lasting victory will be making his party less accountable to the electorate.

This is a bleak reality that we’re likely to struggle against for a generation to come. But there is a possible silver lining that could prove significant.

For decades, the right has attacked the fundamental legitimacy of the courts, arguing in broad terms that liberal activist judges—“robed tyrants”—were legislating from the bench. (There was a kernel of truth to that claim for a short period under the Warren Court, which, over the course of 16 years, ended legal segregation, strengthened defendants’ rights and other civil liberties, and established that the Constitution granted a right to privacy that would later become the basis of Roe v. Wade.) And while conservatives endowed chairs at law schools, funded organizations like The Federalist Society, and made the courts into a top issue for their voters, liberals and progressives tended to criticize individual rulings they hated, but by and large continued to believe in the fundamental legitimacy of the Supreme Court.

After denying Barack Obama an opportunity to shift the balance of power on the Court for the first time since 1970, and with four conservative justices appointed by Republican presidents who came to power despite losing the popular vote—and two justices who have been confirmed despite credible accusations of sexual misconduct—the left’s belief in the legitimacy of the institution cannot be maintained.

This could signal a sea change with far-reaching consequences that Republicans ultimately come to rue. As Mark Joseph Stern wrote at Slate, it’s not hard to imagine a future Democratic president simply ignoring the Court’s rulings. “It’s easy to envision the presidential statement,” Stern wrote. “As the chief executive, it is my duty to enact this legislation, passed through the democratic process, and to reject the illegitimate ruling of Donald Trump’s Supreme Court.”

It’s already spurred some talk of packing the Court if or when Democrats regain power. Less dramatically, if the Supreme Court becomes as important for Democratic voters as it is for Republicans, it would open up new space for organizing and activism, and new efforts to reform the institution. It even has the potential to mitigate Democrats’ persistent drop-off in turnout for midterm elections.

Mitch McConnell is a shrewd field general, and his party just won a major battle that will change American life in dramatic ways for years to come. But their naked power grab may have woken a sleeping giant, and that could ultimately cost them the war.