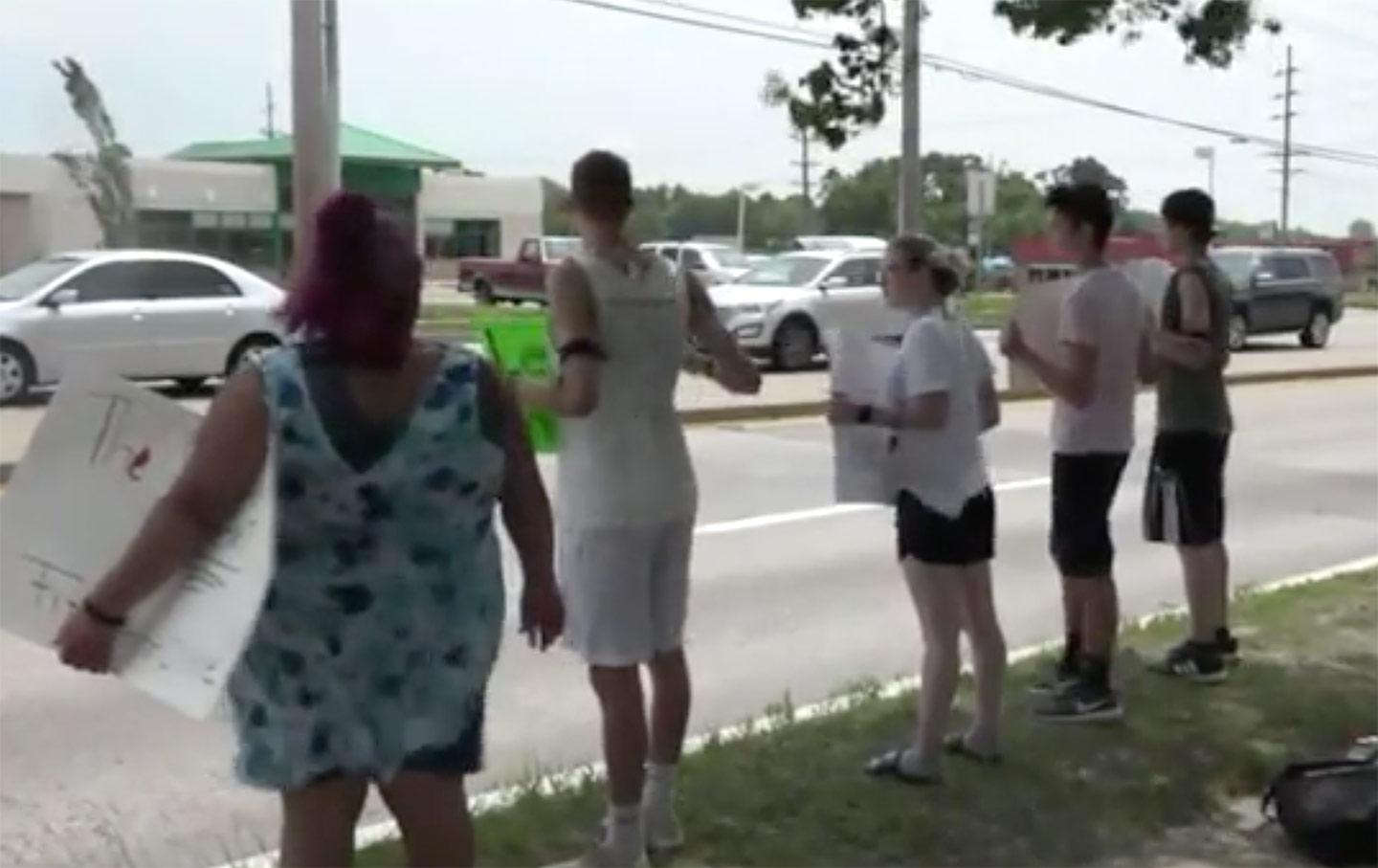 Hazelwood West High School students protesting the school's decision to suspend 12 students after they walked out in support of their teachers in Hazelwood, Missouri. (FOX 2 St. Louis)

Hazelwood, Missouri—On the afternoon of May 18, a delivery man carrying a stack of pizza boxes dropped off lunch for a few dozen high-school students gathered outside Hazelwood Central High School. Class was in session, but they weren’t attending. It was the fourth day in a row that students across the district, suspended from school for walking out of class that Monday, returned to their protest sites to rally for Hazelwood teachers, whose contract negotiations had recently come to a standstill.

The pizzas were ordered by the teachers of Hazelwood Central. Careful not to collect the money during work hours, they had raised $200 for the student protesters’ lunch on their own time. Diane Livingston, president of the teachers’ union, visited the students that afternoon. “I just wanted to see how they were doing,” she said.

Although most of the students had received suspensions—some for “disruptive” or “dangerous” behavior—they continued to show up to protest daily. A few students, including junior Kyleah Brady, had been pulled out of class and suspended based on security-camera footage showing her at the protest the day before. She was given five days of out-of-school suspension with only six days of school left. “That means I’ll miss my finals,” Brady said. Following her suspension, she walked directly from the administration building to the protest.

Before Monday, May 15, the Hazelwood School Board had refused to negotiate with the teachers’ union for better pay. According to Hazelwood West junior Zoë Wells, students began asking about the negotiation process during class the week before, prompting their teachers to explain: The school refused to negotiate, so they were at a stalemate. The next step for unions is usually to protest, but that would be impossible under state law—they’d be fired for it.

So the students walked out for them.

It started at Hazelwood West High School, where students used Snapchat to spread plans for the walkout to students at Hazelwood Central. Central students then Snapped the plans to their friends at other schools in the district. In this way, and through text messages, the news went around: On Monday, walk out of class.

Over 100 students walked out of their respective schools that day to stand just outside school property, chanting and holding signs demanding a better contract for their teachers. After about 20 minutes, school administrators told students to come back inside. They refused. Hazelwood West sophomore Ishmaiah Moore said that, contrary to what administrators claimed, the protests were not dangerous, and if they were disruptive, then that had been the point. “The whole purpose of a protest is to be heard and to be seen,” he said. “So we were chanting and being loud, deliberately,” but otherwise the protest, to many students and teachers, did not warrant the 200 suspensions issued over the course of the week.

“No one was violating students’ First Amendment rights,” said Kimberly McKenzie, director of communications and marketing for the Hazelwood school district. “It was just the way they went about it. They said it was peaceful protest, but it was far from it. We have security staff that say they [the students] were using profanity; they were saying, ‘F-this, f-that’ to just everyone. Flipping the bird to the administrators because they didn’t want to return to the building.”

Hazelwood West class president Kyra Pearson was among the first to be suspended. She wore her graduation cords to the protest, a nod to the fact that her suspension meant she would be unable to attend graduation and read the speech she had prepared for the ceremony. Hazelwood West sophomore Jonel Harris, who wore his school’s Wildcat mascot costume at the protest despite the afternoon heat, said that his suspension would prevent him from seeing his older brother graduate. “Which is completely heartbreaking…. He’s always been my role model, the one I look up to and follow, and not being able to see him walk across that stage…” He paused, then added, “It’s one of the biggest things we’ve been waiting for for the past 18 years.” His sign read, “I can’t see my brother graduate now!” His friend Corey Johnson, a sophomore, held a sign that read “This is B.S. (bullying students)! #HSDWalkout.”

The ACLU of Missouri; Metropolitan Congregations United, a local activist group; students and parents met with administrators throughout the week to get the suspensions overturned. They succeeded—by Friday, May 19, the students could go back to school and attend graduation—but at the cost of further contract negotiations. “During these meetings, new information was provided to administrators that some employees of the district encouraged and may have manipulated students into the walkout, which resulted in disruption and created safety concerns,” read a statement the school board issued. All students’ punishments were to be revoked, the statement read, “while this matter with employees is being investigated.”

“We were protecting the students,” Livingston said of the decision to accept the contract, which had been the reason for the protest in the first place. Not only did it fail to raise current wages, Livingston continued; it also worsened teachers’ working conditions, “adding more time to the work year, adding more restrictions on personal days.”

Students deny that they had been “encouraged or manipulated” into protesting. “It was us who started the idea to start protesting for teachers,” said Harris. “We looked at the rules and stuff, making sure that we wouldn’t break any,” added Hazelwood West junior Wells. Livingston, speaking for the teachers’ union, stands by the students’ actions. “It is absolutely not true that teachers ‘manipulated’ students into protesting,” she said. “I personally feel that they chose ‘manipulated’ to pass blame to teachers to cover for their poor actions and decisions in the matter.”

“Something could have been done,” Livingston continued. “They blame it on the employees for wanting more money, but we don’t control that piece. We don’t control what is being spent,” she said, noting that it is not the teachers’ union that controls where the district’s money goes. But McKenzie said the request is simply impossible to fulfill. “No one is against giving the teachers pay raises,” said McKenzie, “It’s just that we can’t do it. There’s no room in the budget. We haven’t had a balanced budget in four years.”

Seniors across the district graduated on Saturday, May 20—even the ones who protested—but the fight isn’t over. Though the teachers must now wait until next year to negotiate their next contract, in the meantime students still want to help.

“Although the students are no longer suspended, they are not done,” said Elad Gross, a lawyer with Education Exchange Corps, an educational-equity organization that promises to continue assisting the students of Hazelwood schools in their fight, who had been at the protests all week. “They want to create lasting change in their community.”