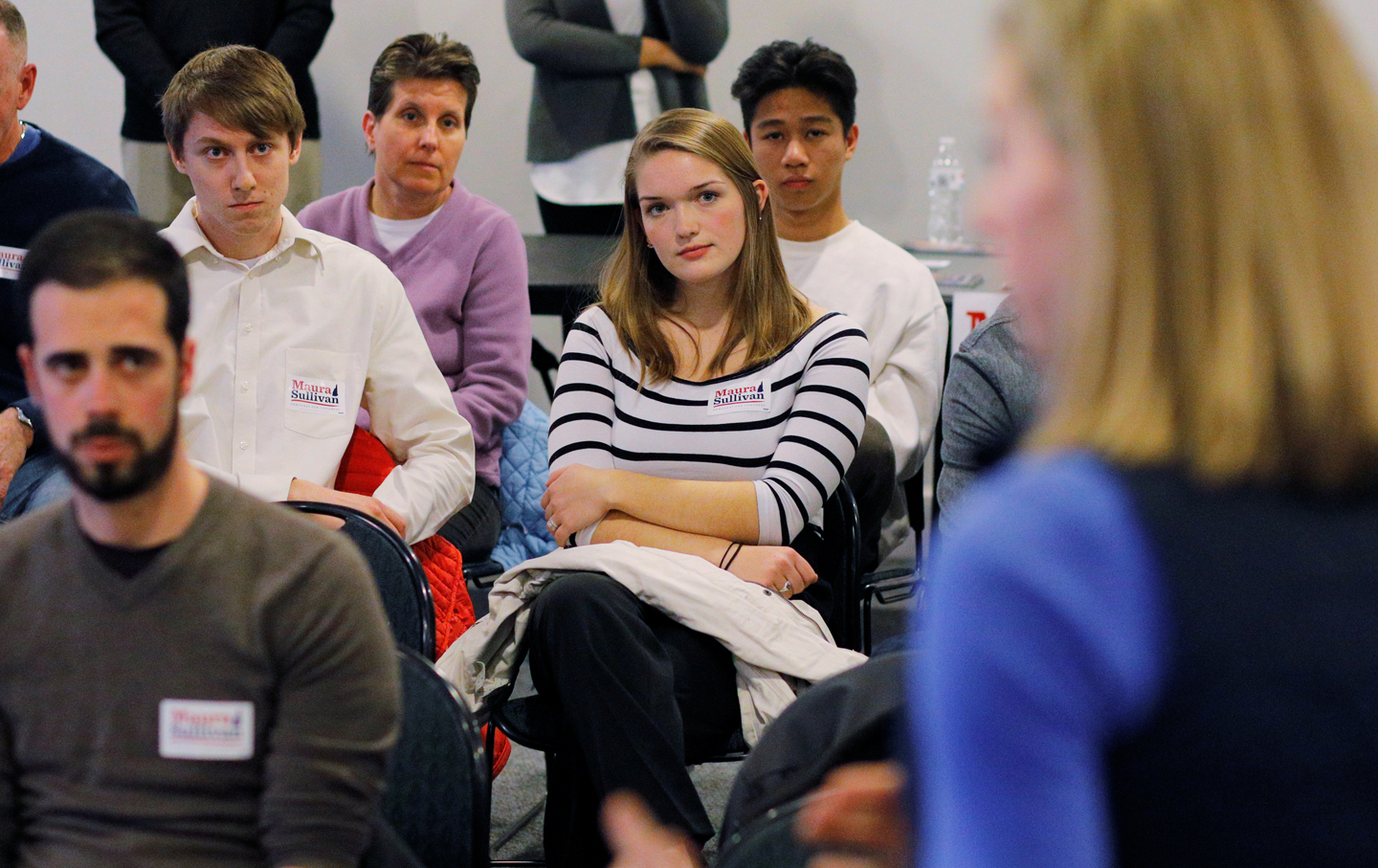 When liberals talk about a “blue wave” wiping out the Republican Party in the November midterm elections, it’s assumed that the Democratic Party’s core constituencies will flood polling places and vote blue down the entire ticket. These key demographics include people of color, women, college graduates, and millennials.

It’s worth highlighting millennials because they will soon overtake boomers as the largest generation. Most of them identify as either Democrats or progressive independents. They care about climate change; they’re less enamored with capitalism than their parents are; and they detest Donald Trump. At a glance, this generation would appear to be the natural grassroots fuel for a midterm cycle that leaves Mitch McConnell and Paul Ryan licking their wounds.

But in fact, a new Reuters/Ipsos survey suggests that the opposite could be happening. More than 16,000 registered voters between the ages of 18 and 34 responded to the online survey. The conclusion? Millennial voters are losing their enthusiasm for the Democratic Party, and a growing number of them now believe that the GOP is offering better economic leadership. What’s curious about the Reuters/Ipsos survey is that it doesn’t suggest any change in the millennial generation’s negative perception of Trump.

So why are millennials embracing Trump’s party right before a crucial round of midterms? Three words: the tax cuts.

When Republican leaders introduced their plutocratic tax-reform package last year and rammed it through Congress in a most undemocratic manner, their sales pitch was that the tax cuts would put more money in the pockets of hardworking, cash-strapped Americans. Democrats protested that the average taxpayer’s dividend would be dwarfed by the refunds that would go to the wealthiest households, and that the bill would pave the way for defunding government programs like Medicare, Social Security, and SNAP.

Initially, this idea of the GOP tax-reform bill as a ticking time bomb struck a chord with the public. During its incubation period, the bill was viewed negatively by most voters, and especially by millennials. But once the bill became law, many Democrats clammed up. In doing so, they surrendered to the GOP’s narrative that the tax cuts would be a great thing for Americans who feel squeezed by the economy.


It now appears that millennials were particularly susceptible to this message. Right now, there is no generation of Americans more squeezed and economically vulnerable than they are. On average, millennials are earning 20 percent less than boomers did at the same age. Meanwhile, student debt has reached an all-time high, and recent studies have shown that millennials have very little money saved for retirement. They are urgently in need of policies that create more economic stability for more people.

Bearing that in mind, consider what the Republicans and the Democrats have done since the tax-reform bill was signed into law. The GOP has continued peddling its snake-oil pitch that the tax cuts will lead to fatter paychecks and simpler, lower taxes for pretty much anyone with a job. Meanwhile, the Democratic Party has countered this narrative by filing a lawsuit against Russia and WikiLeaks over 2016 election meddling, spending millions to acquire Hillary Clinton’s e-mail list, and even pushing economic leftists out of Democratic primaries due to misguided concerns over “electability.”

This is incredible electoral negligence for a party that aspires to take back the House and Senate just six months from now. Not only have the Democrats allowed the GOP to win the messaging battle over tax cuts, they still haven’t united behind alternative economic solutions that are tangible, easy to understand, and capable of inspiring millennials to vote blue in November. And this is not due to a lack of ideas! Some of the most exciting proposals are coming from the rumored 2020 Democratic presidential contenders. Kirsten Gillibrand, Cory Booker, and Bernie Sanders have made waves by calling for policies like single-payer health care, Eisenhower-era marginal tax rates, and a guaranteed-jobs-for-all program.

Any one of these concepts would make a compelling midterm pitch to millennial voters if embraced and amplified by the Democratic Party as a whole. Any one of them would allow millennials to endorse a better and more substantial form of economic relief than the GOP’s poison-pill tax-cut package. Making these ideas part of the Democratic Party platform would demonstrate that the party is capable of the kind of bold and visionary economic leadership that millennials are desperately seeking.

However one might feel about the Republican Party, one thing has to be recognized: The party has displayed economic leadership on the issue of taxes. It’s a duplicitous form of leadership that will ultimately screw millennials, but for now, it’s something that the young and distressed can believe in. Remember: The GOP passed its tax cuts after eight years of Democratic rule, during which many millennials saw their economic prospects worsen. That’s not necessarily the fault of Democrats, but it’s a reminder that the party has only just begun to consider that big and bold economic reforms—not milquetoast incrementalism—is what many millennials want.