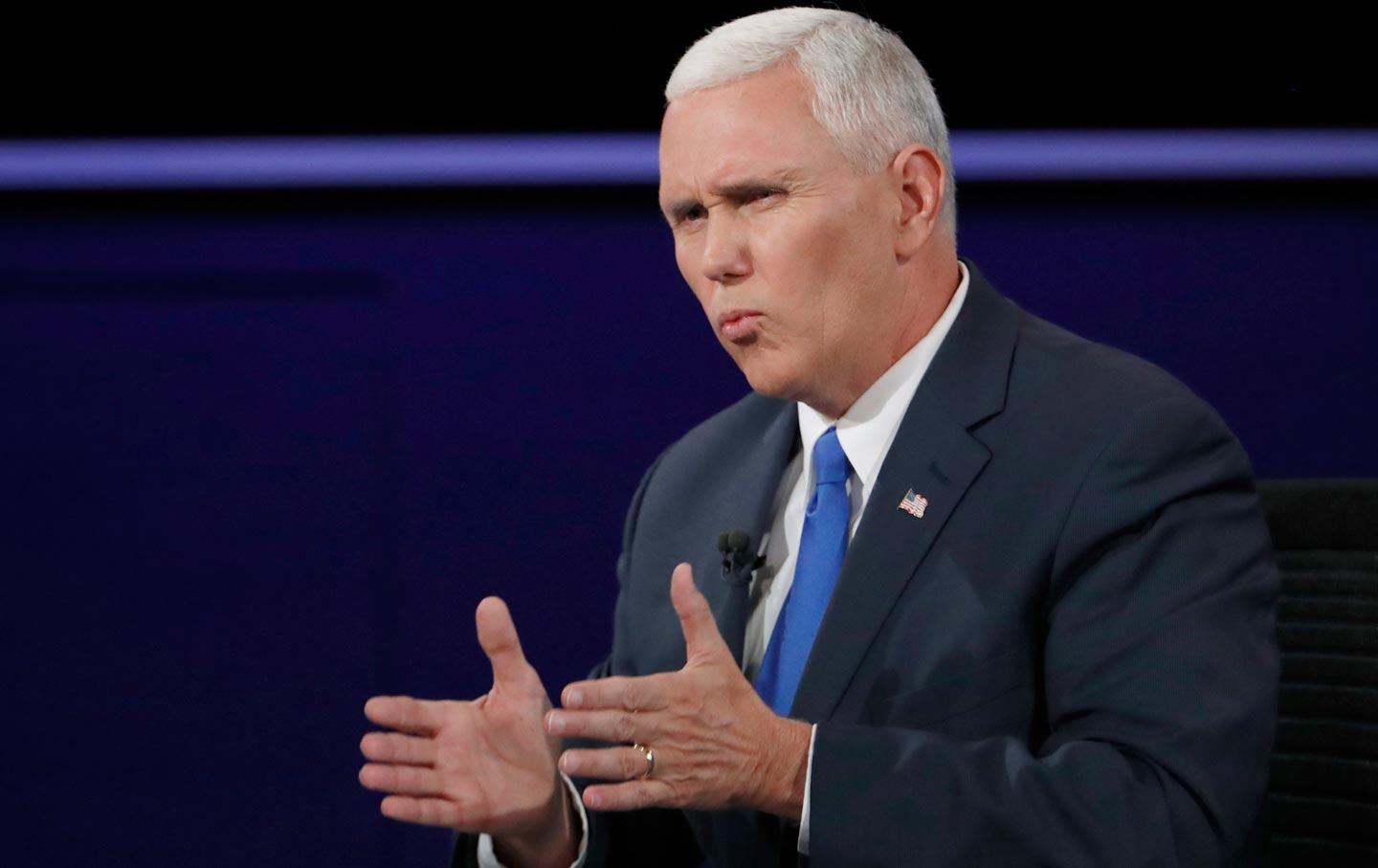 Mike Pence has no shame. That was established by his decision to quit a campaign for reelection as governor of Indiana and jump into the passenger seat of Donald Trump’s clown car. But the Republican achieved a new level of shamelessness in a vice-presidential debate where he grumbled about Democrat Tim Kaine’s “avalanche of insults” after the senator from Virginia reviewed a litany of Trump’s insulting comments about women, federal jurists, American prisoners of war. When Kaine pressed his point on Trump’s racism and xenophobia, Pence twisted the scenario once more, griping, “Senator, you whipped out that Mexican thing again.”

Pence did it all with a straight face, which some might suggest was Orwellian. In fact, it was Nixonian. Richard Nixon’s great skill as a campaigner was his ability to look into a television camera and make statements that he knew to be false. But Nixon had a measure of shame. He would sweat; he would stumble in his delivery; his eyes would go a little wild.

That earned the Republican contender high marks from feckless pundits who imagine that shamelessness is a mark of political agility. But that should also unsettle Americans who remember the past and fear for the future. Pence is so much more Nixonian than Nixon.

Pence has been running for higher office for 30 years.

And nowhere was that more evident than when Pence uttered the most cynical line of a debate that was thick with cynicism. Early on in Tuesday night’s session, after Pence had danced his way around a number of straightforward questions regarding Trump’s misstatements and misdeeds, Kaine tried to force open a discussion about the maybe-not-a-billionaire’s shadowy financial arrangement. Referring to Pence, Kaine said, “I am interested to hear whether he’ll defend his running mate’s not releasing taxes and not paying taxes.”

“Absolutely I will,” responded Pence, even as he absolutely did not answer the most basic questions about Trump’s lack of transparency.

Moderator Elaine Quijano pressed Pence: “Governor, with all due respect, the question was about whether it seems fair to you that Mr. Trump said he brilliantly used the laws to pay as little tax as legally possible.” Pence’s reply was more shamelessly disingenuous than anything Nixon would have dared.

What went unmentioned—and this is on Kaine and Quijano—is that someone else on Tuesday night’s stage was a career politician.

Who might that be? Well, Mike Pence, of course. The governor may identify as a Republican and a conservative, but he is first and foremost a political opportunist of the old school who is constantly on the make—looking for the next opening to advance a career that Pence still hopes will land him in the White House. (Not as Trump’s vice president but as President Mike Pence.)

In an homage to Nixon, Pence used his vice-presidential platform to set the stage for his 2020 presidential run.

Pence has been running for higher office for 30 years. Two years after finishing law school at Indiana University in the mid-1980s, Pence was campaigning for Congress.

And losing. And losing again. After defeats in 1988 and 1990, Pence attached himself to the “state-based free-market think-tank movement” that corporations and the Koch brothers have used to advance their agenda. That gig gave the ambitious but unsuccessful congressional candidate the connections he needed to become a right-wing talk-radio host and… to launch another congressional bid.

Pence finally won a House seat in 2000, and quickly began angling for positions of authority in the House. He was a steady vote for the foreign and domestic policies of President George W. Bush and Vice President Dick Cheney. But his ambition often got the better of him. Pence’s bid for the post of House minority leader in a 2006 race with eventual Speaker John Boehner, but earned only 27 votes from social-conservative stalwarts and other hardliners.

Pence eventually got himself elected as House Republican Conference chairman in 2009. But he immediately began making noise about running for an Indiana Senate seat. Then he repositioned himself for a 2012 gubernatorial bid, which he won.

Pence quickly began making noises about mounting a 2016 presidential run. But no one got very excited about the prospect—especially after Pence’s promotion of extreme religious-right agenda items (including a “Religious Freedom Restoration Act” designed to permit discrimination against members of the LGBTQ community) provoked national outrage and had to be rewritten.

Pence’s many stumbles and conflicts made him uniquely unpopular at home. By the summer of 2016, polls had him in a tight race for reelection and The Indianapolis Star reported in May that only 36 percent of Indiana voters said the governor should be reelected. Luckily for Pence, he did not have maintain his reelection run. He was given an opportunity to get on the Trump train, and he leapt on board.

That choice brought Mike Pence, who has mounted 18 primary and general election campaigns over the course of 28 years, to the 2016 vice-presidential debate stage.

Where Pence complained about career politicians—and, in an homage to Nixon, used his vice-presidential platform to set the stage for his all-but-announced 2020 presidential run.