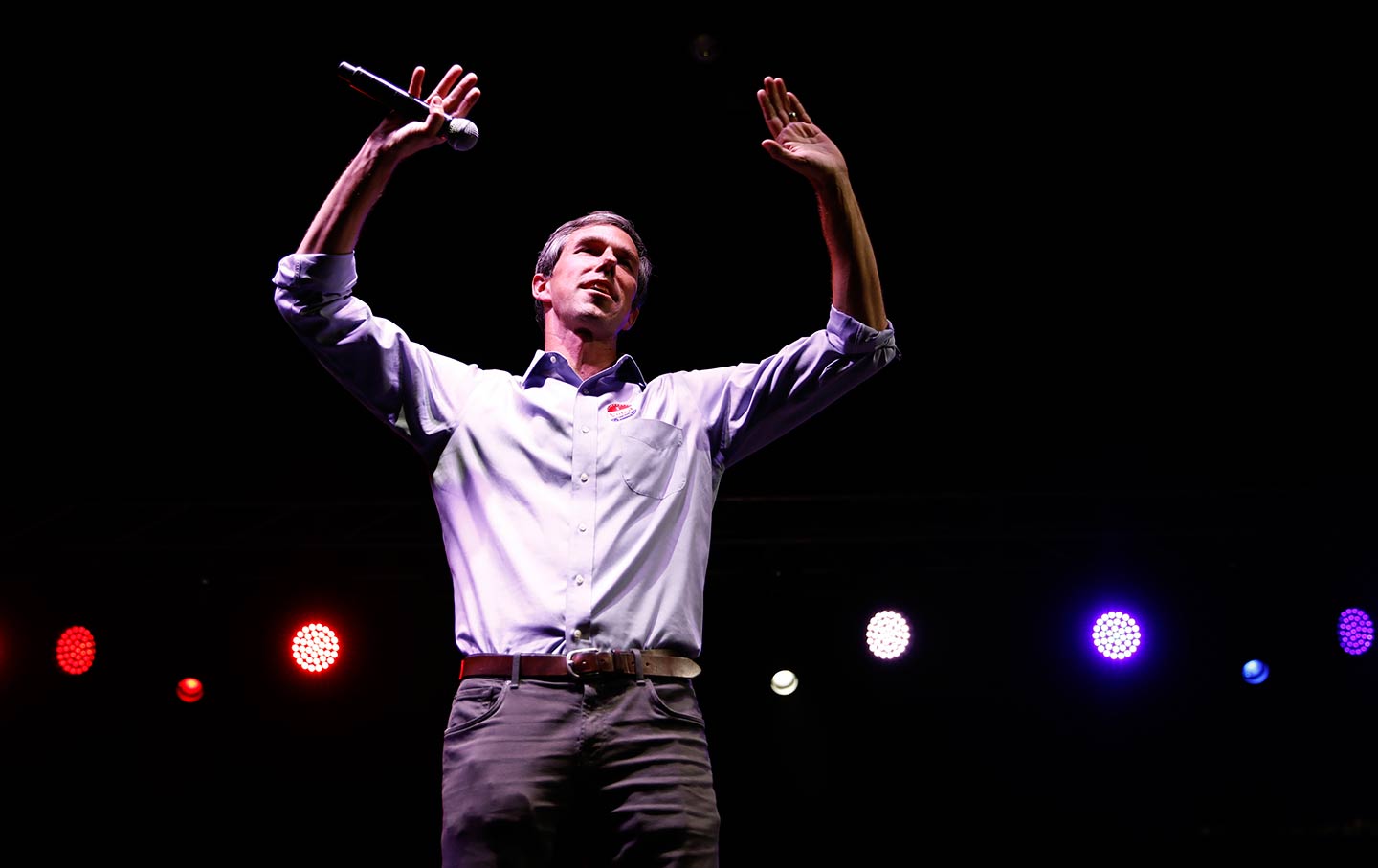 CNN is scheduling a novel night of programming Tuesday, “Election Night in America Continued,” a full week after the midterms—an acknowledgment that six states are still counting ballots, as well as the fact that the story many journalists told on November 6 did not turn out to be the real story. That night I stopped by a friend’s place to watch the returns for a while, just in time to hear Democrat James Carville declare forlornly on MSNBC that “It’s not going to be a wave election,” and to see the faces of the mostly young people in the crowd around me sink into despair. Within about a half hour, we began to get some better news, but Carville’s original verdict, echoed by many pundits, shaped most coverage.

Liberal New York Times columnist Nicholas Kristof mocked the “blue ripple,” while conservative Ed Rogers crowed in The Washington Post: “Democrats won the House, but Trump won the election,” declaring decisively that “there was no blue wave.” These hot takes continued even as contrary evidence came in: As recently as Monday night, the Associated Press announced: “No, it wasn’t a blue wave,” before conceding that “Democrats are riding higher than they thought on election night.”

Make no mistake: It was a blue wave. Democrats won at least 35 seats in the House, and as results continue to come in from California and elsewhere, that number could go as high as 40. Meanwhile, although 10 incumbent Democratic senators were running in states Trump carried, only two of them lost (there is one recount), while the party picked up Republican Senate seats in Nevada and Arizona. So far, their popular-vote margin seems to be close to 7 percent; as Vox’s Matthew Yglesias wrote, that surpasses the margin in the GOP wave elections of 1994 and 2010.

As the truth of the Democrats’ success begins to dawn on the pundit class, a new half-baked narrative emerges: that the Democrats are in danger of “overreach,” or overreliance on progressive candidates and issues that are out of step with an imaginary “mainstream.” Kristof’s post-election column managed to combine two wrongheaded warnings for Democrats: first, that there was no blue wave, because Democrats had mistakenly run candidates too far to the left. The better-informed Peter Beinart, writing in The Atlantic, asked “Will the left go too far?” The New York Times declared that “Democrats Have Two Paths in 2020: Daring or Defensive,” casting progressive as “daring” and moderates as “defensive,” but otherwise failing to adequately define any of those four terms.

Beinart’s piece is at least smart and historically informed. But in focusing as he did on the drubbing Democrats endured in 1966 after a historic wave election in 1964, and finding warnings about today, he makes too facile a comparison with modern Democrats. The 1966 election marked the electoral beginning of the white backlash against Democrats’ moves on race, as well as the chaos represented by urban rioting and a growing antiwar movement. Today, there is no such chaos on the left: 2018 represents the multiracial backlash to that white backlash; and for better or worse, there is no massive extra-Democratic party movement pushing Democrats to the left the way there was in the mid-1960s. We can worry about that problem, or opportunity, when we have it.

The moderate Democratic group Third Way, which seems mainly to exist to troll progressive Democrats, announced that its chosen candidates had trounced “progressives”—but that required it to radically redefine moderates to include people who support a public option for the Affordable Care Act, Medicaid expansion, a $15 minimum wage, debt-free college, robust support of reproductive rights—the sorts of issues that Third Way and Democratic Leadership Council officials used to insist had to be sacrificed by many Democrats in order to achieve a Democratic majority.

As I argued repeatedly when moderates and the media tried to minimize progressive gains during the 2018 Democratic primaries, the only way to define women like Michigan’s governor-elect Gretchen Whitmer or new Kansas House Representative Sharice Davids as “moderates” is to ignore what they stand for entirely. It’s time for Third Way to catch up to the party it purports to be a part of.

How did so many get the election results so wrong for so long? Part of the problem is that pundits fell in love with a group of candidates who almost never had a chance—and whose losses were called early in the night. The first to fall was Kentucky Democratic House candidate Amy McGrath, a fighter pilot running in a bright-red Trump district who nonetheless ran a scrappy race distinguished by fantastic viral advertising. Similarly, Air Force combat veteran M.J. Hegar ran an impressive race and great ads in a red Texas district, but lost by three points. In fact, Democratic women with a military or intelligence background won five of the eight races they ran; unfortunately, two races they lost were called the earliest, and thus established the tone.

Then there was progressive Texas superstar Beto O’Rourke, who came within three points of Senator Ted Cruz—a finish that proved that his inspiring, innovative, people-powered campaign, in fact, had some chance to knock off Cruz, but fell just short. O’Rourke’s defeat encouraged the “no blue wave” story line, as did the (so far) second-place finishes of Florida’s Senate and governor candidates Bill Nelson and Andrew Gillum, as well as Georgia gubernatorial candidate Stacey Abrams. None of those three races has been called yet—Nelson and Gillum’s close finishes got them into recounts; a judge just gave the Abrams campaign extra time before ballot certification, and demanded that every county establish a reliable system for judging “provisional” ballots—yet the early apparent losses also fed the emerging narrative that Democrats had fallen short.

But later Texas results showed that, unlike in M.J. Hegar’s and O’Rourke’s races, Democrat Colin Allred flipped a House seat in suburban Dallas, and Lizzie Parnell-Fletcher did the same in suburban Houston. Likewise, in suburban Atlanta, an early lead by Republican Representative Karen Handel gave way to an upset victory by gun-sense advocate Lucy McBath. (In the Georgia’s nearby seventh district, an even more multiracial slice of suburban Atlanta, Carolyn Boudreaux has sued to get Gwinnett County to change the way it’s deciding whether absentee ballots count; she trails by fewer than 900 votes). Democrats’ hopes to win big in metro suburban areas in 2016 couldn’t carry Hillary Clinton to victory, but they powered the Democrats to at least a 35-seat House victory in 2018.

But it wasn’t just suburban America where Democrats outperformed Clinton and other 2016 contenders; they swept elections in the three Midwest states that made Donald Trump president: Wisconsin, Michigan, and Pennsylvania. Trump now has to worry not only about suburban voters but also the Midwest states that animated his story of being the white working -class hope, as well as Southern and Western states like Texas, Georgia, and Arizona, where a growing minority population, especially Latinos, are favoring Democrats.

It’s true that there were a few reasons for concern last Tuesday: Democrats lost governor’s races in purple Iowa and Ohio, two states Barack Obama carried twice. Yet Ohio Senator Sherrod Brown overwhelmingly won reelection, and Iowa Democrats flipped two US House seats. Similarly, Senate losses in Indiana and Missouri show that Democrats continue to struggle in rural areas; even in Wisconsin and Minnesota, where Senators Tammy Baldwin and Amy Klobuchar won big, they lost a lot of rural districts they won in 2012. But outside of rural America, Democrats have many clear paths to victory.

As Yglesias argues persuasively, part of the election-night problem for journalists was that Democrats lost heartbreaking races in the Eastern time zone, while making major pickups later, as the map moved west. But it also seems like many journalists are working from an old playbook, before the expansion of early voting, regular absentee balloting, and voting by mail. Even in 2016, Hillary Clinton went from losing the popular vote to winning it by almost 3 million once the results from the left-coast states—California, Oregon, and Washington—were counted. As recently as Sunday, networks were showing ballots in Florida’s contested Broward County as “100 percent reported,” though votes were still being counted, appropriately—leaving room for Trump’s bogus claims of voter fraud or other shenanigans to take hold among less-informed voters. The always-smart media columnist Margaret Sullivan has a simple answer for that: “Slow the hell down!”

Although it might be disappointing to admit we’re going to lose the convention (and readership and ratings) of a dramatic election-night finale, it’s becoming an outdated journalistic practice. Maybe a “second” election night on CNN (where I am, full disclosure, a contributor) will show that viewers reward journalists who are willing to wait to get the story right. At any rate, more journalists need to acknowledge that they got the story wrong, because the early trumpeting of GOP victory unwittingly plays into Trump’s claims that later-called elections are somehow being “stolen”—which is incredibly dangerous to democracy.