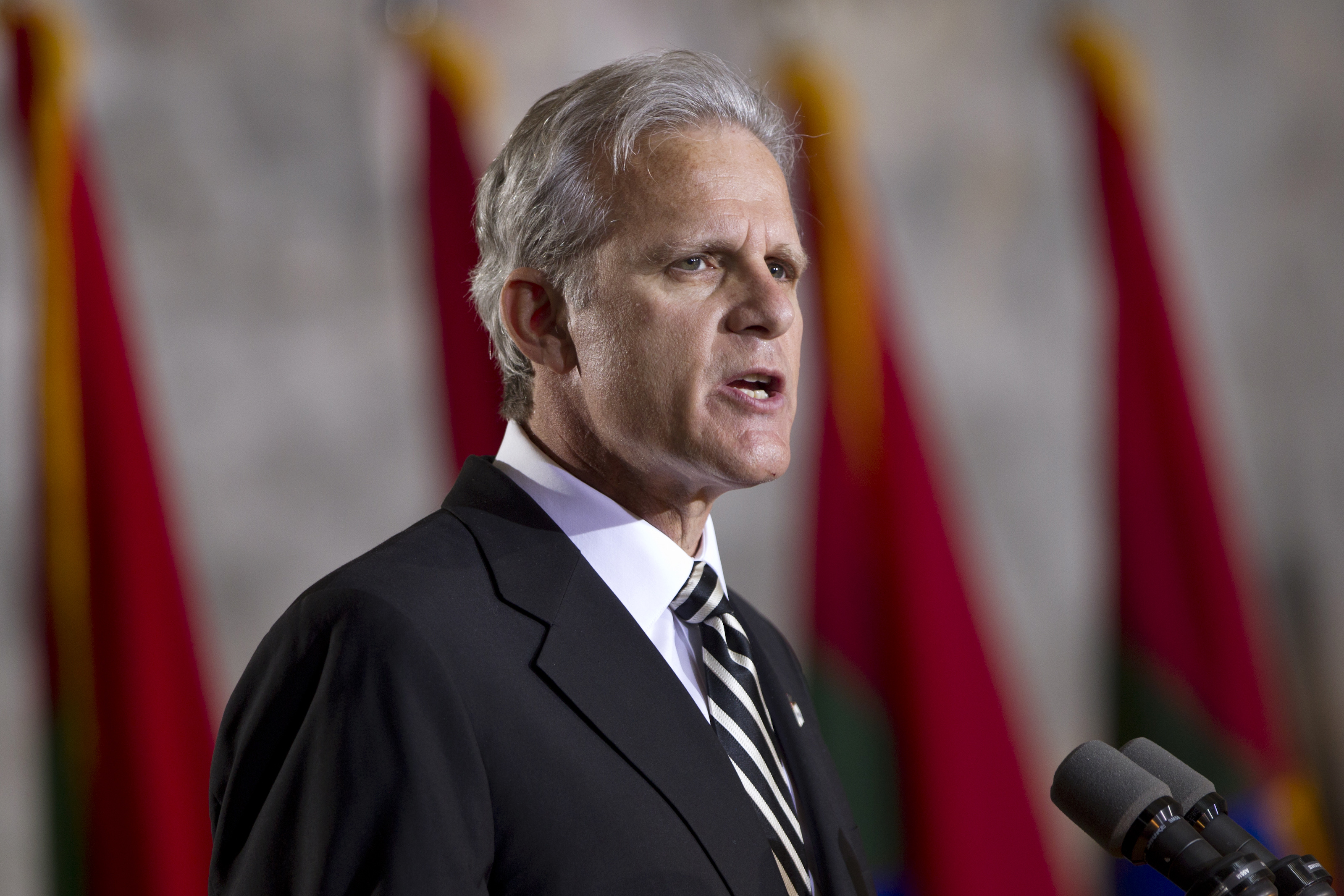 Former Israeli Ambassador to the US Michael Oren. (Reuters/Benjamin Myers)

There’s so much to unpack about former Israeli ambassador to the US Michael Oren’s recent forays into generating book publicity. Many people have noted that the former scholar keeps getting things wrong and stepping on toes. Oren relies on everything from “bong-hit psychoanalysis,” as my friend Matt Duss brilliantly put it, about Barack Obama’s family history with Muslims to encounters with The New York Times that didn’t quite go down like he says. It is, as Duss wrote of one such play, “not analysis, but an ideological argument.” Even Anti-Defamation League head Abe Foxman—who shouldn’t be taken seriously on account of his own bigotries, but is nonetheless a marker of a certain brand of fiercely pro-Israel activism—thinks Oren’s gone too far. All this to make a not very persuasive case that Obama set out to damage the US-Israel relationship.

I’m not as interested, however, in all of that, per se, as I am in what the shitstorm Oren stirred up says about Israeli politics in America. The dynamics of these politics are shifting, and Oren’s rants shed a clarifying light on the changes. No one really disputes what’s going on—liberals and Democrats are, as evidenced by a series of flaps large and small, becoming disillusioned with Israel—but different voices attribute the roots of these shifts to different parties. For the pro-Israel right, there seems little question that the shifts emanate from a concerted campaign. I’m talking, of course, about the movement to boycott, divest from, and sanction Israel, known by its initials, BDS.

The contradictions of blaming—or crediting, depending on your perspective—BDS speak for themselves. Pro-Israel forces constantly deride BDS as a fringe movement with no major victories or chances of success, and yet pro-Israel groups and individuals spend an inordinate amount of time inveighing against the movement. In a sense, they’re right on both counts: BDS has had limited successes, but the campaign is clearly gaining steam. And it does represent a threat to the established order of Israeli politics here: By shifting the debate to one about rights, and taking a nonviolent tack at addressing the deficits of those rights for Palestinians in territories controlled by Israel, BDS puts a tough choice to American pro-Israel liberals, those who adhere to a notion of “liberal Zionism.” (For a progressive Israeli take on that term, listen to my friend Noam Sheizaf’s remarks at the liberal J Street conference.)

Some of these liberal Zionists tend to lash out at BDS the same way the right does. Just last week, Rutgers historian and media-studies professor David Greenberg released a review in Democracy of a new anti-BDS book. One wouldn’t be surprised to learn Greenberg thinks BDS is anti-Semitic and a malicious campaign to delegitimize Israel. You should read the review for yourself, but for our purposes it suffices to say that Greenberg positions himself as a liberal defender against BDS while also mentioning, at least in passing, that liberal Zionism is under assault from the “chauvinistic pro-Israel right.” That seems fair enough, but there’s a legitimate question here about what side the liberal pro-Israel position is really under attack from: Is it BDS, which comes in for so much liberal-Zionist criticism, or right-wing Israeli leaders and pro-Israel ideologues, who come in for much less, that is undermining the tenability of liberal Zionism?

Enter Michael Oren. Oren, of course, speaks to and from the pro-Israel right (and moves further right with each op-ed). One of the most curious strains of Oren’s recent attacks were those against liberal American Jews. In his book (which came out this week and I haven’t read), he reportedly directs substantial ire at American liberals. A Haaretz article reviewed the attacks: “Obama isn’t Oren’s only target: he is also critical of American Jewish liberals and their ‘religion’ of Tikkun Olam, and turns devastating when it comes to American journalists who are also Jews.” Oren went after the New York Times editorial board, Times writer Thomas Friedman, and Leon Wieseltier, formerly with The New Republic and more recently of The Atlantic—liberal Zionists all.

No single example can tell the whole story of these complex politics, but Oren’s attack is representative of something broader: Unlike BDS, the Israeli right and, by extension, their American allies hold real power. It is they, not those one-staters among BDS advocates, who are squeezing liberals out of the pro-Israel camp in America. It happens in two ways. First, Israel’s own rightward shift is reflected in policies that make liberal Zionists’ dreams of a two-state solution more difficult to achieve (one cannot, for example, blame the Palestinians and their advocates for the Netanyahu government’s enthusiasm for settlements). Secondly, the right-wing Zionists who have come to dominate Israel’s body politic actively squeeze out the liberals. Consider, for example, Sheldon Adelson’s recent anti-BDS summit, which deliberately excluded liberal pro-Israel groups despite the fact that their campus presence

In this latter formulation, there’s a bit of typical sectarian politics: The Stalinists hated the Trotskyites above all, and the right-wing Zionists seemingly hate their liberal counterparts more than they do the Palestinians. But there’s also a practical dimension that speaks to why BDS puts liberal Zionists in a tough place; the pro-apartheid right wing offers a one-state solution that is de facto already the operating principle on the ground, whereas liberal Zionist two-staters (see Greenberg, Friedman and Wieseltier) and liberal pro-BDS one-staters (who support democracy in the Holy Land) are pushing for “solutions” to the conflict that increasingly seem equally unlikely.

In other words, the pro-Israel right—exemplified most recently in Michael Oren’s attacks on American liberals—is winning. The point is fast approaching at which liberal Zionists will have to choose between their liberalism and their Zionism, if only because the notion of liberal Zionism itself is everyday becoming less of a plausible ideology for what’s happening on the ground in Greater Israel. I’m not asking them to join BDS efforts, but at least if they can’t see who their real comrades are—those dedicated to human rights and equality as universal values—they should recognize who their real enemies are. Instead, the right is rendering liberal Zionism, such that it is, a moot ideology, even as liberal Zionists themselves take the fight to BDS. Michael Oren must be pleased.