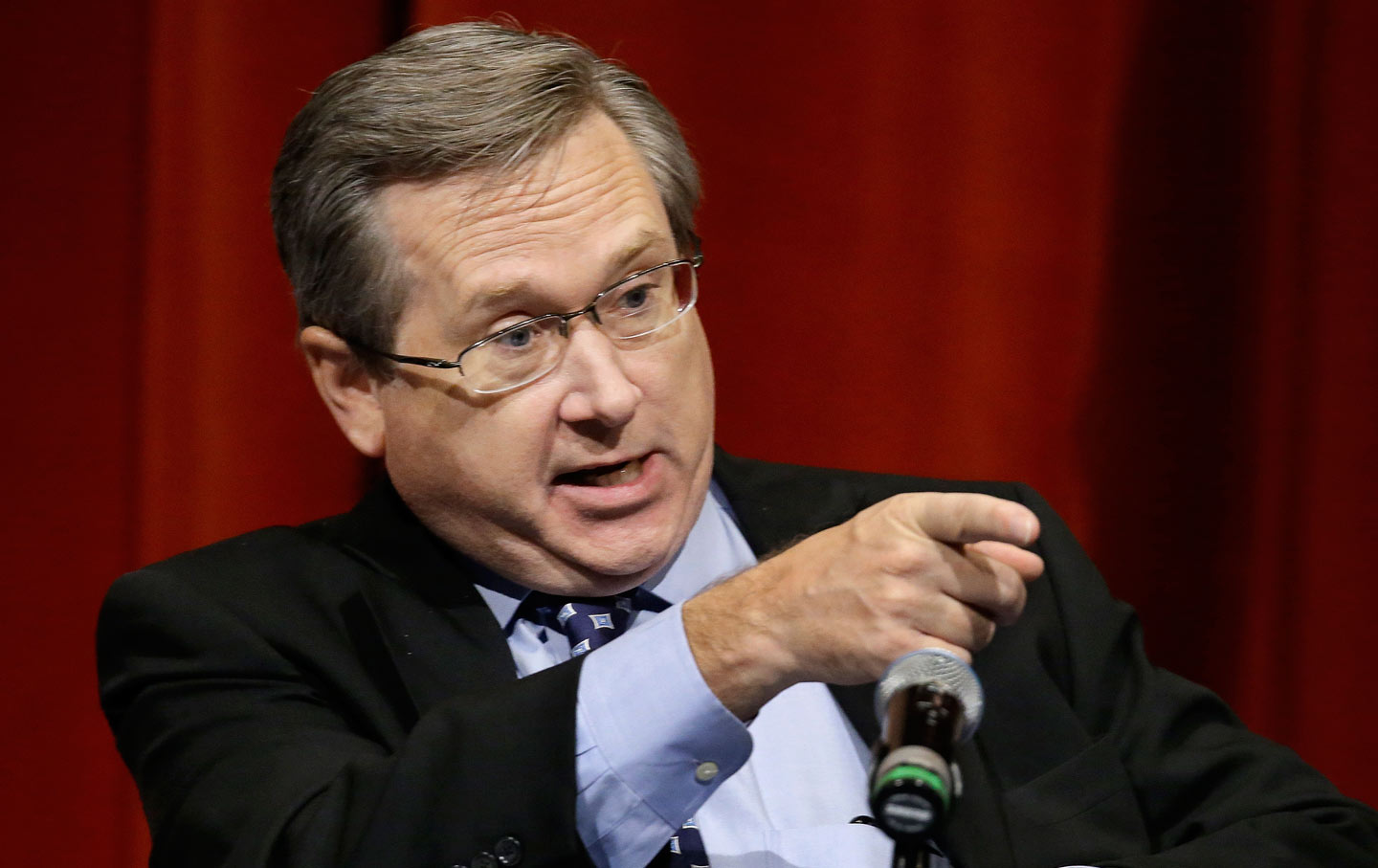 Donald Trump did not emerge from the primordial swamp of contemporary conservative Republicanism and create something new. He dove into the swamp. His policies, his language, and his destructive and irresponsible approach to politics are familiar to anyone who has traveled in the circles of the supposedly “mainstream” conservatism that has come to define today’s Republican Party. That may explain why embattled Republicans senators who sometimes position themselves as critics of Trump sound so very much like their party’s nominee.

Yes, Trump may be cruder, and slower to apologize, but how much does the billionaire’s approach to politics really differ from that of Mark Kirk in Thursday night’s Illinois US Senate debate?

Kirk, one of a number of Republican senators facing tough reelection fights this fall, identifies as “a fiscal conservative, social moderate and defense hawk on our national security.” On paper, there’s nothing “alt-right” about this guy. His social moderation, which places him roughly in the vicinity of Dick Cheney and Barry Goldwater on the historical continuum, leads some newspaper editorial writers to imagine that he is a reasonable guy. But Kirk is only “reasonable” on a political continuum that has tipped so far to the right that anti-labor zealots like Scott Walker and proponents of anti-LGBTQ discrimination like Mike Pence are imagined to be mainstream political figures. By that standard, Ronald Reagan would be suspiciously moderate and Richard Nixon would be a flaming liberal.

For all intents and purposes, Kirk fits within the comfortable confines of today’s Republican Party—which is to say that, like Trump, he is far more comfortable with extremism, far more inclined toward obstructionism and far more prone to engage in the cutthroat politics of personal destruction than responsible Republicans and conscientious conservatives of the past. Along with a number of allegedly “mainstream” Republican incumbents who are running in states that are unlikely to back Trump on November 8, Kirk has tried to distance himself from a presidential nominee who keeps exposing himself as a xenophobe, racist, and sexist.

Illinois Senator Mark Kirk sounds a lot like Trump when Kirk mocks his challenger’s ethnicity and record of service.

Yet in Thursday’s debate with Democratic challenger Tammy Duckworth, Kirk offered a reminder of the underlying coarseness of contemporary conservatism and the new-model Republican Party it has created.

Duckworth, an Iraq War veteran who served as a US Army helicopter pilot and lost both of her legs as a result of combat wounds, spoke in the debate of the care she would take during Senate deliberations on war and peace.

“My family has served this nation in uniform going back to the Revolution. I am a daughter of the American Revolution,” said Duckworth. “I’ve bled for this nation. But I still want to be there in the Senate when the drums of war sound. Because people are quick to sound the drums of war, and I want to be there to say this is what it costs, this is what you’re asking us to do.”

“And if that’s the case, I’ll go. It’s the families like mine that bleed first,” the Democratic member of Congress continued. “But let’s make sure that the American people understand what we are engaging in and let’s hold our allies accountable because we can’t do it all.”

Kirk’s response was not to say that he, too, would be a responsible senator. Rather, it was to serve up a helping of Trump-like snark.

“I’d forgotten that your parents came all the way from Thailand to serve George Washington,” sniped the senator.

Kirk conveniently forgot that, while Tammy Duckworth was born in Bangkok, Thailand, and while her mother is from Thailand, her father was a US Marine Corps veteran who worked in southern Asia with the United Nations. And, yes, the Duckworths do trace their roots in the United States to before the Revolutionary War—in which an ancestor of Tammy Duckworth fought with forces led by General George Washington.

Amid an outcry over Kirk’s bizarre line of attack, which critics ripped as “offensive, wrong and racist.” Kirk’s aides admitted that his challenger was indeed a “war hero.” But the senator and his campaign maintained a steady line of attacks on Duckworth, many of which echoed Trump’s talk about immigration, refugees, and Hillary Clinton.

That’s typical of Republican senators in tight races this year. Even those who try to put space between themselves and Trump, like Kirk and New Hampshire Senator Kelly Ayotte, default into Trump talk during high-stakes debates. Asked if she would “point to (Trump) as a role model” during an early-October debate, Ayotte replied: “I think that certainly there are many role models that we have and uh, I believe he can serve as president and so absolutely I would do that.

Ayotte quickly walked the line back, saying she “misspoke” in her answer to what should not have been a complicated question. But she coupled her apologies with campaign messaging that, as with other conservative Republicans, parroted obstructionist rants from Trump and Texas Senator Ted Cruz about the need to block Democratic Supreme Court nominees. The campaign of Ayotte’s challenger, New Hampshire Governor Maggie Hassan, has detailed dozens on pro-Trump and Trump-like comments from the Republican incumbent—who initially supported her party’s presidential nominee and then said she planned to write-in Trump’s exceptionally-extreme running mate, Mike Pence.

No matter who she votes for, Ayotte seems to be more than willing to advance the Trump agenda. In a radio interview this week, the host explained that if Trump is elected president “he’s going to need some people in the Senate who can actually make some of the changes he’s talking about.” Ayotte replied: “That’s right.”

Some senators who are in tough races have simply stuck with Trump, not just by offering their support to the nominee but by adopting the billionaire’s approach. Just as Trump knows no boundaries when it comes to ripping his rivals (from “Little Marco” to “Crooked Hillary”), Wisconsin Senator Ron Johnson has lost all sense of perspective as he attacks his rival, former Wisconsin senator Russ Feingold. Arguably the angriest Senate candidate of 2016, Johnson spews venom at every campaign stop, sputtering about how he despises Feingold (a former senator who is remembered for building bipartisan coalitions on issues ranging from campaign finance reform to privacy rights to presidential accountability), because the millionaire incumbent thinks: “He’s a complete phony and I’m actually genuine.”

Johnson famously declared that he might campaign with Trump as “the Ronald and the Donald.” And he has continued to parrot policies that are remarkably reminiscent of “our Republican nominee’s” stances on immigration, foreign policy and filling Supreme Court vacancies.

Now that both he and Trump are trailing in Wisconsin, Johnson is appealing to Republican voters who cannot stomach the party’s presidential candidate to “put that aside” and vote for the party’s Senate nominee.

He’s hoping to fool the voters.

But no one should be fooled.

The silly spin that would have us assume there are dramatic distinctions to be made between Johnson and Trump, between Ayotte and Trump, between Kirk and Trump is the big lie of 2016—as these senators have illustrated with such unsettling frequency during the course of the this year’s campaign.