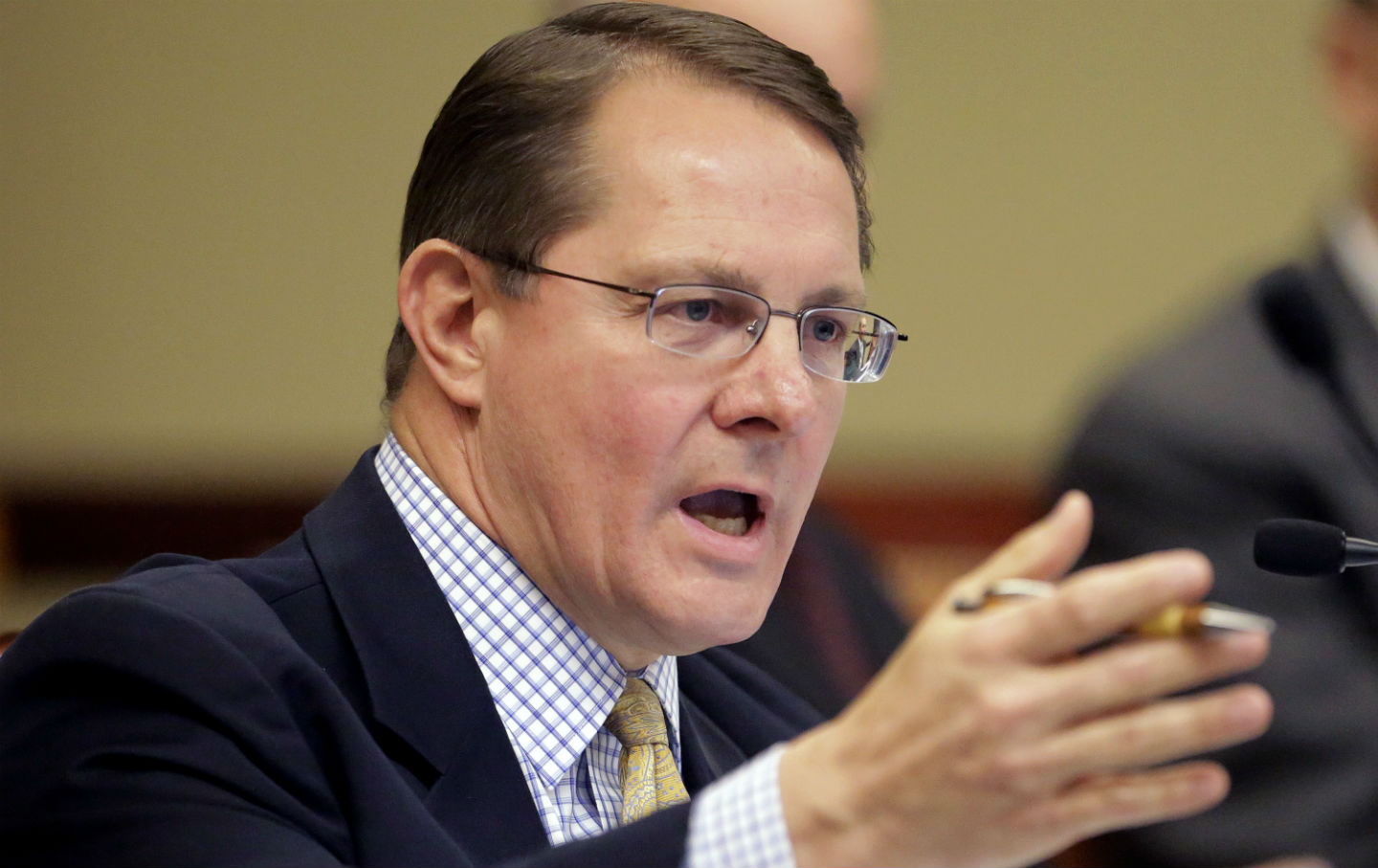 To cash-strapped counties in the American West, Ken Ivory is offering what sounds like salvation. Underfunded schools, potholed roads, cuts to law enforcement—those can be reversed, the Republican state representative from Utah suggests in presentations to county commissioners, Tea Party groups, and Fox News viewers, if states force the federal government to turn over millions of acres of public land to local authorities.

Over the past several years Ivory has made himself the leading evangelist for the land-transfer movement, which is undergoing something of a resurrection in Western states. He’s also facing new accusations of fraud. In early June, the watchdog group Campaign for Accountability filed complaints in three states alleging that Ivory is scamming local governments out of thousands of taxpayer dollars every year by “making false statements” to convince them to support his nonprofit, “which exists primarily to pay him and his wife,” the complaint reads. What Ivory really has to offer, according to CFA’s Anne Weismann, is not salvation but “snake oil.”

Since the early years of the 20th century, cattle ranchers, logging companies, mining interests, and oil drillers have been pushing to “take back” federal lands, with the aim of dodging federal environmental regulation. They’ve had little material success, though uprisings such as the Sagebrush Rebellion in the late 1970s fanned flames of contempt for the federal government. Now the movement is having a resurgence, thanks in part to the rise of the Tea Party and the celebrity status attained by people like Cliven Bundy, the Nevada rancher whose refusal to pay fees for grazing his cattle on public land sparked a standoff with the Bureau of Land Management in 2014. (The BLM lost.)

Dozens of land-transfer bills have been introduced in state legislatures this year, and there are murmurs at the federal level, too. An amendment inserted in the Senate’s budget bill in March would facilitate the transfer of public forests, wilderness areas, and other lands to the states. In their own budget resolution, House Republicans expressed support for “reducing the Federal estate, and giving States and localities more control over the resources within their boundaries.” And in late April, two Republican representatives from Utah launched a Federal Land Action Group to “develop a legislative framework for transferring public lands to local ownership and control.”

But if any single person deserves credit for the resurgence of land-transfer fever, it’s Ivory. In 2011 he presented model legislation to the American Legislative Exchange Council, the conservative idea-shop whose Energy, Environment, and Agriculture Task Force at the time was stacked with representatives from the oil, coal, and mineral industries. The following year Ivory sponsored Utah’s Transfer of Public Lands Act, which demanded that the government turn over 30 million acres by the end of 2014. That year he was also involved in the founding of a nonprofit, the American Lands Council.

As the president of ALC, Ivory travels through the West selling his plan for the transformation of public lands. Literally selling: Ivory and his associates ask county commissioners and other groups to pay membership fees, ranging from $1,000 for the bronze level to $25,000 for platinum, to support ALC’s work. Videos of some of Ivory’s presentations are online; his general style is to lay out a long and complicated history of property rights in America, leading to the conclusion that the federal government does not have legal rights to its land. Then he explains how forcing a handover will “grow the economy and the tax base,” and argues that states will do a better job of managing the land than federal agencies.

More than three dozen counties have opened their coffers for Ivory, including ones like Klamath County, Oregon, that have little to spare, as the Los Angeles Times reported recently. The Koch brothers’ group Americans for Prosperity also backs ALC, but most of the organization’s revenue (over $200,000 in 2013) comes from local governments—in other words, from taxpayers. More than half of that goes to pay Ivory and his wife, who is the group’s communications director.

The crux of the new complaints against Ivory, which were filed in Utah, Montana, and Arizona, is that he’s soliciting funds for himself based on promises and legal arguments that hold no water. “He’s really trying to sell what has been a widely discredited [legal] theory,” Weismann said. Essentially, the legislation that ALC pushes amounts to a “demand” for the federal government to give up its public lands; supporters of those bills threaten to sue if the feds don’t comply. “What we envision,” Arizona state senator Al Melvin told High Country News in 2012, “is all of the Western states going before the Supreme Court to force this issue.” But many legal scholars say the constitution gives the states no real power to back up such legislation. Based on court precedent, the Utah Office of Legislative Research and General Counsel judged land-transfer legislation to have “a high probability of being declared unconstitutional.” Legislative attorneys in Alaska offered a similar analysis.

Then there’s the question of the financial rewards that Ivory claims would fall to the states. Managing millions of acres land is expensive: For instance, it would cost Montana about $100,000 a year just to take over firefighting duties from the feds. Counties themselves would lose millions that the federal government currently pays in lieu of taxes, as well as shared revenues from the land. Ultimately, states would probably be forced to sell what was formerly public, or to squeeze profit from it by leasing it out for oil drilling, and other extractive activity. Critics say the privatization and industrialization of public lands is really the whole point of the campaign. For evidence, they point to the fact that many of the groups pushing land transfers are funded by the same corporate interests that stand to benefit.

Ivory insists that he is working for county commissioners, some of whom sit on ALC’s board, not taking advantage of them. And he maintains that they’re getting their money’s worth. ALC is “having success throughout the west and throughout the nation,” he claimed recently. But it’s hard to say what Ivory judges as a success. While more than 40 transfer-related bills and ballot measures have been introduced this year alone, Utah is the only state where legislation has been signed into law since Ivory began his push in 2011. And even there it’s had no practical effect. The bill demanded the federal government turn over 30 million acres by December 2014—a deadline that came and went with no movement from Washington.

Local opposition to the land-transfer agenda is one reason that it hasn’t gone far. Hunting and fishing groups organized protests against proposed legislation in Montana and Idaho earlier this year. David Allen, the president of the Rocky Mountain Elk Foundation, was among the hundreds of demonstrators who showed up at the Montana state capitol in Helena in February. Allen told me that when it comes to land management he does not “subscribe to a theory or ideology of ‘lock it up and look at it,’” and he spoke distastefully of the “radical environmental agenda.” But he thinks the campaign to put states in control of public lands is about money, not better management. “It’s not that we’re overly enamored with federal land management…but merely waving a magic wand and saying, ‘Okay, states are going to manage it,’ is no remedy whatsoever,” he said. “All that is is rhetoric. They’re not addressing any real problems or any real solutions.”

But even the most recent accusations against Ivory (which follow ethics complaints against ALC in multiple states) haven’t dampened the enthusiasm of his supporters. In New Mexico, Otero County commissioners voted unanimously this week to renew their membership in ALC at the $5,000 level. “You already have a receptive audience,” said Anne Weismann, referring to strong states’-rights sentiments in the West, combined with the very real economic hardships that plague many rural counties. “When someone like Ken Ivory comes along, the seeds are already planted.”

Paul Castilleja, a commissioner in Oregon’s Wallowa Couny (an ALC member), said he wasn’t aware of the accusations against Ivory. “Well, I wouldn’t have expected that to happen,” Castilleja said when I told him how much of ALC’s budget went to pay Ivory’s salary. But it didn’t change his mind about the land transfer campaign generally. “We feel like ‘we the people’ within each county knows better than Washington, DC, does,” he said. He attributed high wildfire danger and lost jobs to environmental regulation, which he said has halted timber sales on federal land in the county.” I can’t help but think that the federal government has let us down,” he concluded.

Ivory agreed to an interview last week regarding ALC’s work and the allegations of fraud, but when the time came, I wasn’t able to reach him. An assistant wrote later to say that he was too busy. He was meeting with lawmakers in Washington, sharing his vision for remaking the West.