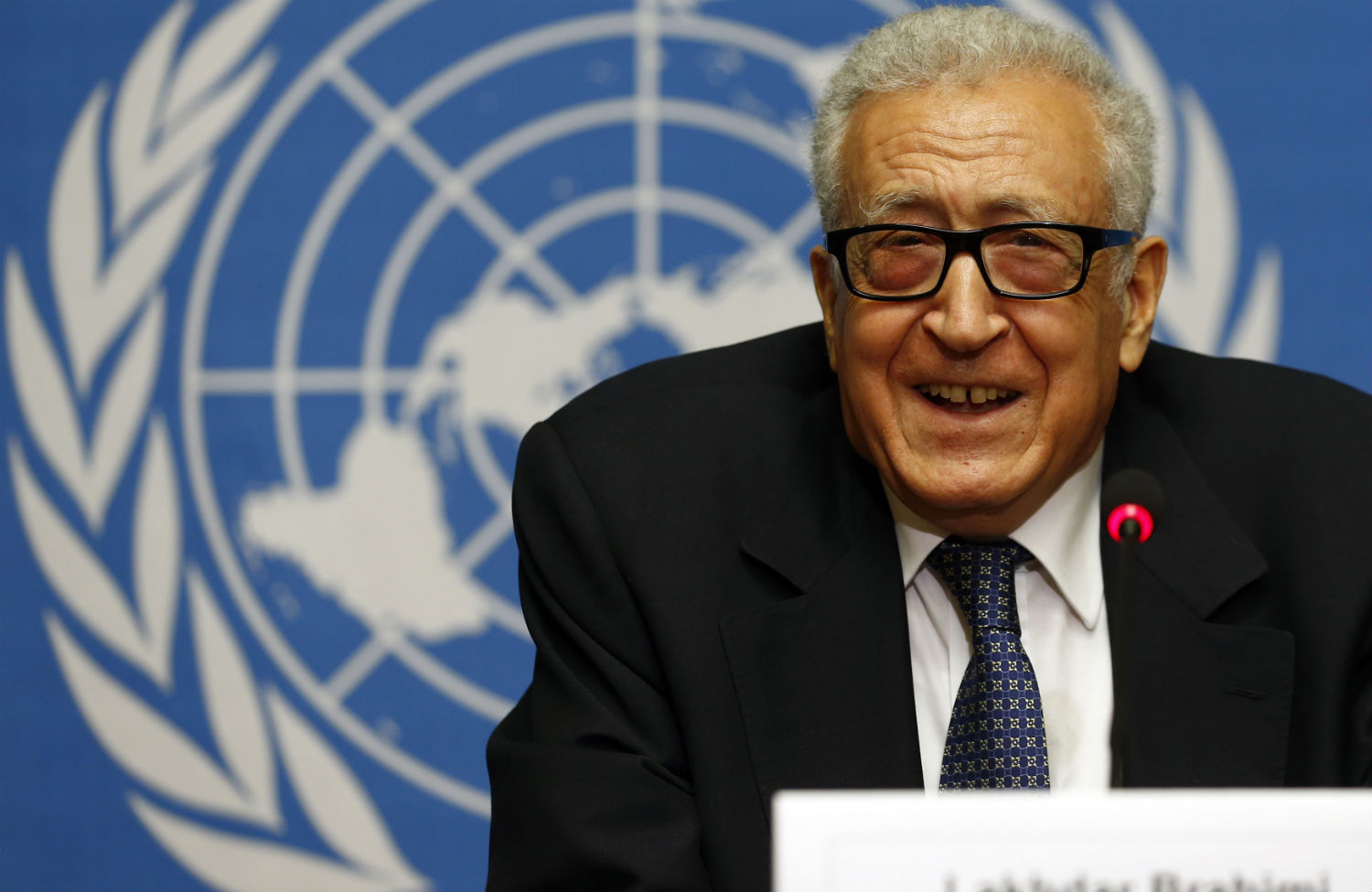 Global media give a lot of coverage to most of the players in the Syrian crisis: the delegations from a fractious rebel front and the apparently intransigent Syrian government, as well as the high-profile diplomatic teams from the United States and Russia, led respectively by Secretary of State John Kerry and Foreign Minister Sergey Lavrov. The key figure managing the talks, however, is less often seen and heard. That is the way he likes it. From the earliest days of the joint effort begun last year by the United States, Russia, the UN and the Arab League to put diplomacy to work in the Syria crisis—first in eliminating chemical weapons and then on the larger and much more difficult, perhaps impossible, goal of a peaceful issue political transition—the man in the middle of news conferences and at the head of the negotiating table has been Lakhdar Brahimi, an 80-year-old Algerian diplomat who is the UN’s most experienced troubleshooter in the Arab Middle East and Afghanistan.

Brahimi, a formidable gentleman known for his quiet dignity and measured comments, operates from a deeply ingrained understanding of what may or may not be possible when dealing with what is now the world’s most dangerously turbulent region. He advises patience, pertinacity and small steps.

“These people did not meet once in three years,” he said of the warring Syrian sides when speaking to reporters in Geneva during a break in recent rounds of mostly unproductive talks. “They did not expect there would be a magic wand to finish the 1,000-mile walk. If we walk the first step it will be very good.”

From an American perspective, the apparent willingness of Kerry to give Brahimi the lead and support in the talks that he had often been denied by Washington in the past seems to reflect the Obama administration’s preference for negotiations over military action on Syria, Iran and other foreign policy issues. It also reveals a closer working relationship with the United Nations after years of disagreements and obstruction under Presidents Bill Clinton and George W. Bush. For Brahimi, who remarked last year how much he appreciated that the American government was not led by a “gunslinger,” his personal relationship with Kerry has by all appearances been positive. His working relationship with the Russians is longstanding.

The Obama administration’s recognition of UN expertise was further evident in the now famously intercepted telephone conversation in early February between Assistant Secretary of State Victoria Nuland and the American ambassador to Ukraine, Geoffrey Pyatt. In the conversation about getting some action on a US-backed plan to start talks between Ukrainian factions, Nuland told the ambassador about a decision at the UN to have Secretary General Ban Ki-moon appoint a former Dutch ambassador in Kiev, Robert Serry, as mediator in the Ukrainian dispute to speed up negotiations that the European Union seemed slow or reluctant to start. “That would be great I think to help glue this thing and have the UN glue it and you know, fuck the EU,” said the voice on the tape unofficially identified as Nuland’s. Neither she nor the State Department has disavowed the identity of the speaker, and Nuland has apologized to the EU.

Lakhdar Brahimi, in his work as a political mediator and former head of UN missions in Iraq and Afghanistan, has always made clear in interviews that he was not in favor of wholesale nation-building and what was considered a Western penchant for cultural makeover. He talked instead of the need for a “light footprint,” avoiding the imposition of alien norms and behaviors on societies emerging from disorder and war. His reluctance to make women’s rights a central focus of peace negotiations in Muslim countries, for example, has provoked considerable criticism among feminists both within and outside these nations, although he has pledged to include women in the Syria talks.

Though his roots run deep in Arab society, Brahimi is a cosmopolitan figure. A Sunni Muslim born in Algeria in January 1934, he was educated there and in France, where he studied political science, and where he now lives most of the time. His total fluency in Arabic, French and English has been an asset to the UN in many countries where he has served as a UN special envoy or mediator. His diplomatic skills emerged early. In his 20s, when he joined the Algerian National Liberation Front to fight French colonial rule in the country, he became the NLF’s diplomatic representative in Indonesia. After Algerian independence in 1962, he served in numerous diplomatic posts including as foreign minister from 1991–93.

He entered UN service in 1993 as a special envoy for South Africa, followed by appointments in Haiti and Afghanistan, among many other places. Though the Nobel Peace Prize has eluded him, he will be remembered as the author of a landmark study of UN peacekeeping in 2000 under his chairmanship of the UN’s Independent Panel on United Nations Peace Operations, known widely as simply “the Brahimi report.” In his report, issued a little more than five years after UN debacles in Rwanda and Bosnia, he warned the UN against overreach in taking on peacekeeping missions that the Security Council—and, more to the point, its powerful member nations—were not willing to support with adequate troops and other resources.

Another spell in Afghanistan, from October 2001 to the end of 2004, found him again not always in step with American policy there. He went on to a controversial assignment in Iraq after the US-led invasion and talked bluntly about serious missteps the American administration was taking in organizing a workable, credible government after the overthrow of Saddam Hussein.

From 2006 to 2008 Brahimi had two years for reflection and writing as a visiting scholar in the Institute of Advanced Study at Princeton University. In the summer of 2012, he was brought back into UN service as joint special envoy in Syria for the United Nations and the Arab League, after Kofi Annan, the former secretary-general, quit the job in frustration. Brahimi is also a member of The Elders, a group of veteran statesmen and women dedicated to helping ease social, political and international legal problems around the world. (I profiled The Elders here.)

In a long interview last year with Politically Speaking, the in-house publication of the UN department of political affairs, Brahimi was asked, at another low point in the Syria crisis, if there was any hope of success, and what he was telling President Bashar al-Assad.

“My main message to the Syrian parties has been and continues to be very simple,” Brahimi said. “It reflects the attitudes which have been consistently expressed by the Secretary-General: that there is no military solution to this devastating conflict. Only a political solution will put an end to it. And the basis for such a solution does exist. It is the Communiqué issued on 30 June 2012, after the meeting, in Geneva, of the so-called Action Group of countries convened at the initiative of Kofi Annan.”

That document called for an immediate cease-fire, the release of people arbitrarily detained by the government, free access across the country for journalists, and legal guarantees for Syrians of “freedom of association and the right to demonstrate peacefully.” The government was also ordered to provide full humanitarian access and civilian freedom of movement. In a list of agreed principles the action plan said in summary: “Any political settlement must deliver to the people of Syria a transition that offers a perspective for the future that can be shared by all in Syria.”

A year ago, Russian and American officials began plans for holding a Geneva conference on a political transition, which took months to organize. “Unfortunately, the conditions for starting that conference with a reasonable chance of success are not there yet,” Brahimi said last August. More than six months later, those conditions for success are still all not there, but the conference has begun, and Brahimi is back at work employing his signature tools of the trade. After explosive first encounters between the two Syrian sides in Geneva, he has kept them apart, running separate preliminary talks with the government and the rebels to look for common ground out of the spotlight of the media.

On February 14, he said at a news conference: “Failure is always staring at us in the face. As far as the United Nations is concerned we will certainly not leave one stone unturned if there is a possibility to move forward. If there isn’t, we will say so.”