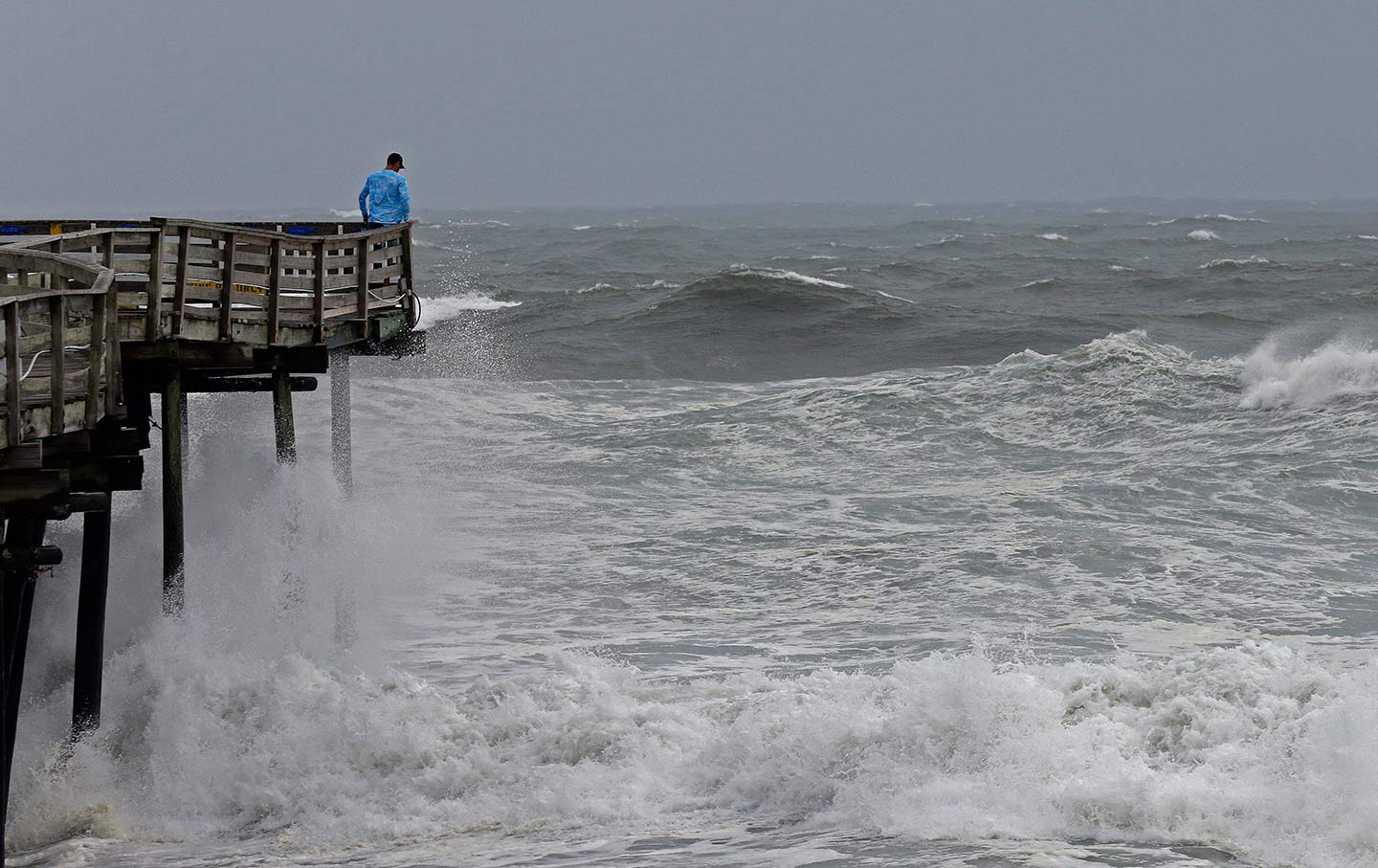 Bill McKibben is a distinguished scholar in environmental studies at Middlebury College, and founder of 350.org. He writes for The New Yorker, Rolling Stone, and The Nation. His most recent book is Radio Free Vermont. This interview has been edited and condensed.

Listen to Bill McKibben on the Start Making Sense podcast.

Jon Wiener: Before we talk about climate politics, let’s talk about the climate: As we speak, Hurricane Florence is heading for the Carolinas.
Bill McKibben: These days there’s always some new illustration of our folly. Florence is going to be a bloody and brutal affair, I’m afraid. It does remind us of just how much of a role stupid political decisions play. You may remember that it was the North Carolina state legislature six years ago that voted to ban the use of the latest science as it related to sea-level rise in coastal planning. That’s one of the reasons, I guess, that so many more structures there are in harm’s way now, as Florence approaches.

JW: While Hurricane Florence is hitting the Carolinas, many of the world’s leaders are meeting in San Francisco at the Global Climate Action summit, to “take ambition to the next level.” The summit is hosted by California’s governor, Jerry Brown. On the eve of the summit, Brown signed into law a bill requiring 100 percent clean-electricity in California by 2045. What do you think about that?
BMcK: It’s good. It’s precisely what California should be doing. It’s the final step in California addressing the demand side of the energy problem. California becomes the second state in the union to pledge this 100 percent goal. Hawaii was the first. It’s ambitious, but entirely doable. They’re ahead of their targets now. It puts into contrast California’s lack of action on the other half of the equation, the supply side. California continues to permit an almost endless number of oil and gas wells around the state, so that’s the other thing that activists have been asking for. So far, we have seen no real sign of progress there.

JW: Before we get to the “keep it in the ground” side of things, I want to stick for a minute on the issue of 100 percent clean electricity by 2045. Los Angeles, which of course is the biggest city in California, gets more of its power right now from coal than from any other source. There’s a huge coal-burning plant located in Arizona, so that people in LA won’t see any air pollution. The LA Department of Water and Power goal is to stop using that coal plant, and replace it by 2025 with a new plant in Utah that will burn methane. What do you think about LA moving from coal to methane?
BMcK: That’s not much of an improvement. I think what’s going to happen, and I think this may accelerate under these new plans from Sacramento, is a much more ambitious effort to move to renewables. No one’s going to be building big new gas or coal-fired power plants because of the economics, especially in a sunny place like California. Between the falling cost of going solar, and now the ever-reducing cost of storage, renewables are the logical way to address these problems.

JW: Meanwhile, Trump continues to roll back federal efforts to fight climate change.
BMcK: Just this week, the federal government exempted the oil companies from their obligation to make even modest efforts to control the release of methane into the atmosphere. Now we’re just telling them to go ahead and do it.

JW: And this follows Trump’s EPA proposing to weaken the rule on carbon-dioxide pollution from cars and trucks, and from coal-fired power plants. Remind us about the role of methane and carbon dioxide in climate change.
BMcK: Those are the two main sources of greenhouse gases. CO2 comes from the combustion of any fossil fuel, coal, oil, gas. Methane comes largely from the release of unburned gas into the atmosphere. When you frack and run gas through pipelines, some of it simply escapes into the air. If that number is more than 2 or 3 percent, then gas-fired power is even dirtier than coal.

JW: The protests in San Francisco this week at the Global Climate Action Summit have focused on “keeping it in the ground.” We’re talking here about oil and gas, especially in California. What’s the argument for keeping it in the ground?
BMcK: We know that we need to keep most of the coal and oil and gas that we know about underground if we have any hope of meeting the targets that everybody agreed to in Paris. The US under Trump is no longer playing by the Paris rules, but these are the targets that science for a decade now has been telling us we must meet, and that we simply can’t meet if we burn any large percentage of that coal and oil and gas. So, along with the move to renewables, a big part of the environmental movement in the last five years, since the launch of the fight against the Keystone Pipeline, has been an effort to keep those hydrocarbons underground. California is probably the place that it would be easiest to really make this policy change. California is a big oil-and-gas state, but California’s economy is so enormous that oil and gas are a pretty negligible part of it.

JW: The hope for a commitment to keep it in the ground has focused on Jerry Brown.
BMcK: Yes, because he’s term-limited and 80 years old and about to leave office, and hence doesn’t need any more of the huge sums of money he’s taken from the oil industry for political campaigns over the years. The hope was that he might be willing to exercise some real leadership here. 800 community groups joined a campaign called “Brown’s Last Chance,” asking that he stop permitting new oil wells, and start shutting down existing wells, especially the ones that are right next to people’s homes and schools. You can guess whose homes and schools they’re right next to. So far, that’s met with no success. Brown has been scornful of it. When one protester said to him, “Keep it in the ground,” he said, “We should put you in the ground.” I guess it gives you some sense of how he’s thinking about these things.

JW: Tell us about the climate marches on Saturday. You were part of one in San Francisco.
BMcK: The one in San Francisco was extraordinarily beautiful, led by indigenous people in frontline communities. It coursed through the streets of the city until it ended at the Civic Center Plaza, where 350.org’s artist-in-residence David Solnit and many local activists had organized what turned into the world’s biggest street mural. It was extraordinarily beautiful. Online, people can see drone footage from above of this endless mural stretching around City Hall. It couldn’t have been a more beautiful day in San Francisco, and the images coming in from the rest of the planet were just as remarkable. There were 900 or so big rallies in 91 countries, and some of them bigger even than the one in San Francisco. I think my favorite pictures came from Kampala, Uganda. There were tens of thousands of people gathered for a really dramatic demonstration—mostly children and young people.