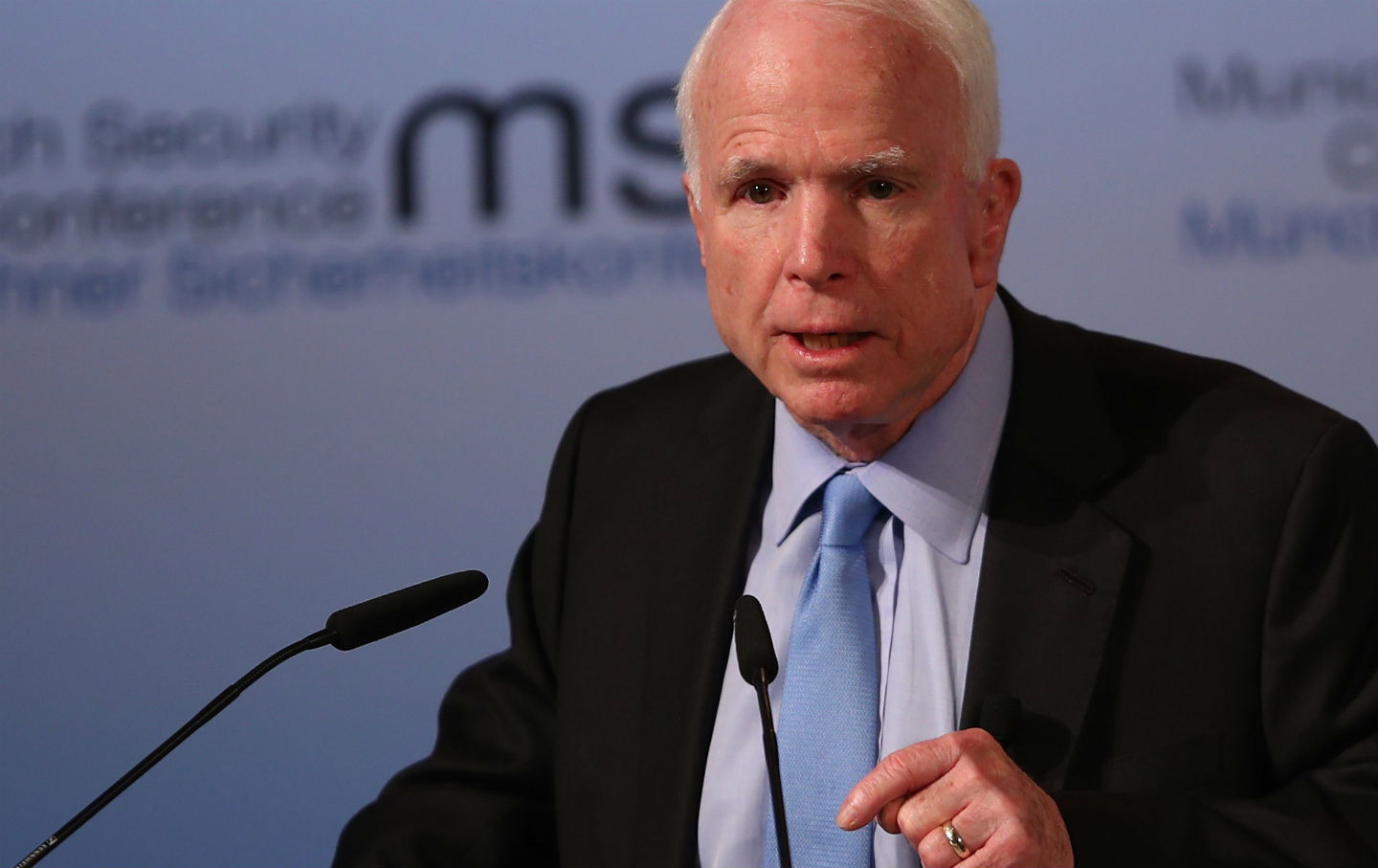 US Senator John McCain speaks on February 17, 2017, at the opening of the 53rd Munich Security Conference in Munich, Germany. (Reuters / Michael Dalder)

Arizona Senator John McCain has been garnering headlines for his “tough talk” about Donald J. Trump, and much else, at the annual Munich Security Conference, which took place over the weekend. McCain—who appears on the cover of the current issue of New York magazine alongside the question: “How Many Chances Do You Get to Be an American Hero?”—has, after eight years in the wilderness, reemerged once again as a darling of the American media, its go-to source for “straight talk.”

In Munich, McCain took aim at President Donald Trump’s so-called “America First” foreign policy, expressing alarm that “many of our peoples, including in my own country, are giving up on the West, that they see it as a bad deal that we may be better off without.” McCain continued, noting that he, unlike Trump, refuses to “accept that our values are morally equivalent to those of our adversaries.” “I am,” proclaimed McCain, “ a proud, unapologetic believer in the West, and I believe we must always, always stand up for it. For if we do not, who will?”

Meanwhile in Munich, Vice President Mike Pence, Secretary of Defense Jim Mattis, and Secretary of Homeland Security James Kelly all pledged eternal fidelity to NATO, while Russian Foreign Minister Sergei Lavrov observed (correctly) that the alliance has “remained a Cold War institution.” The West’s blinkered insistence on the relevance, to say nothing of the appeal, of the alliance, particularly among the population of prospective members like Ukraine, has been studiously ignored by transatlantic security confabs like the Munich Conference for some years now. And yet Western politicians, and that peculiar species known in Washington as “defense intellectuals,” might do well to consider the results of a recent Gallup poll that found that 35 percent of Ukrainians view NATO as a threat, as against 29 percent who see it as a source of protection and 26 percent who see it as neither.

Yet one bit of positive news to emerge from Munich was what seemed to be a renewed commitment to implement the 2015 Minsk cease-fire agreement on the part of Russia and Ukraine. French Foreign Minister Jean-Marc Ayrault said the parties to the agreement would meet “perhaps in three weeks, to see if we can advance on the ceasefire, withdrawal of heavy weapons and exchange of prisoners.”

A push for peace is all the more urgent given the uptick in fighting in eastern Ukraine in recent weeks, caused by what many have described as a “creeping offensive” by Kiev to take and hold rebel-held territory along the cease-fire line.

Tellingly, Kiev’s recent offensive came almost immediately following a trip to to the war’s front lines by none other than Senators John McCain and Lindsey Graham. In the presence of Ukrainian president Petro Poroshenko, Graham told a brigade of Ukrainian soldiers: “Your fight is our fight.… 2017 will be the year of offense.” For his part, McCain told the troops, “I believe you will win. I am convinced you will win and we will do everything we can to provide you with what you need to win.”

One could be forgiven for wondering if there is any precedent for such an incitement to violence by two sitting US senators?

Meanwhile, the US Army has established what it euphemistically calls a “Joint Multinational Training Group” in Yavoriv, Ukraine, for the express purpose of providing “defensive and security training for up to five battalions of Ministry of Defense forces per year” until 2020. The presence of American troops in Ukraine arguably represents the most serious obstacle to a peaceful settlement of the conflict, and yet the establishment of an American army base on the territory of a non-NATO country on Russia’s border has received no media coverage and zero congressional scrutiny.

This week, the conflict in Ukraine enters its fourth year. UNICEF reports that “a million children in eastern Ukraine are in urgent need of humanitarian aid,” while the casualty count on both sides continues to climb. French Foreign Minister Ayrault was moved to observe over the weekend that the Russians and Ukrainians have “no other option, but to respect Minsk. They have no alternatives.” But he cautioned,“We need a lot of patience because we can see a lack of will on either side.”