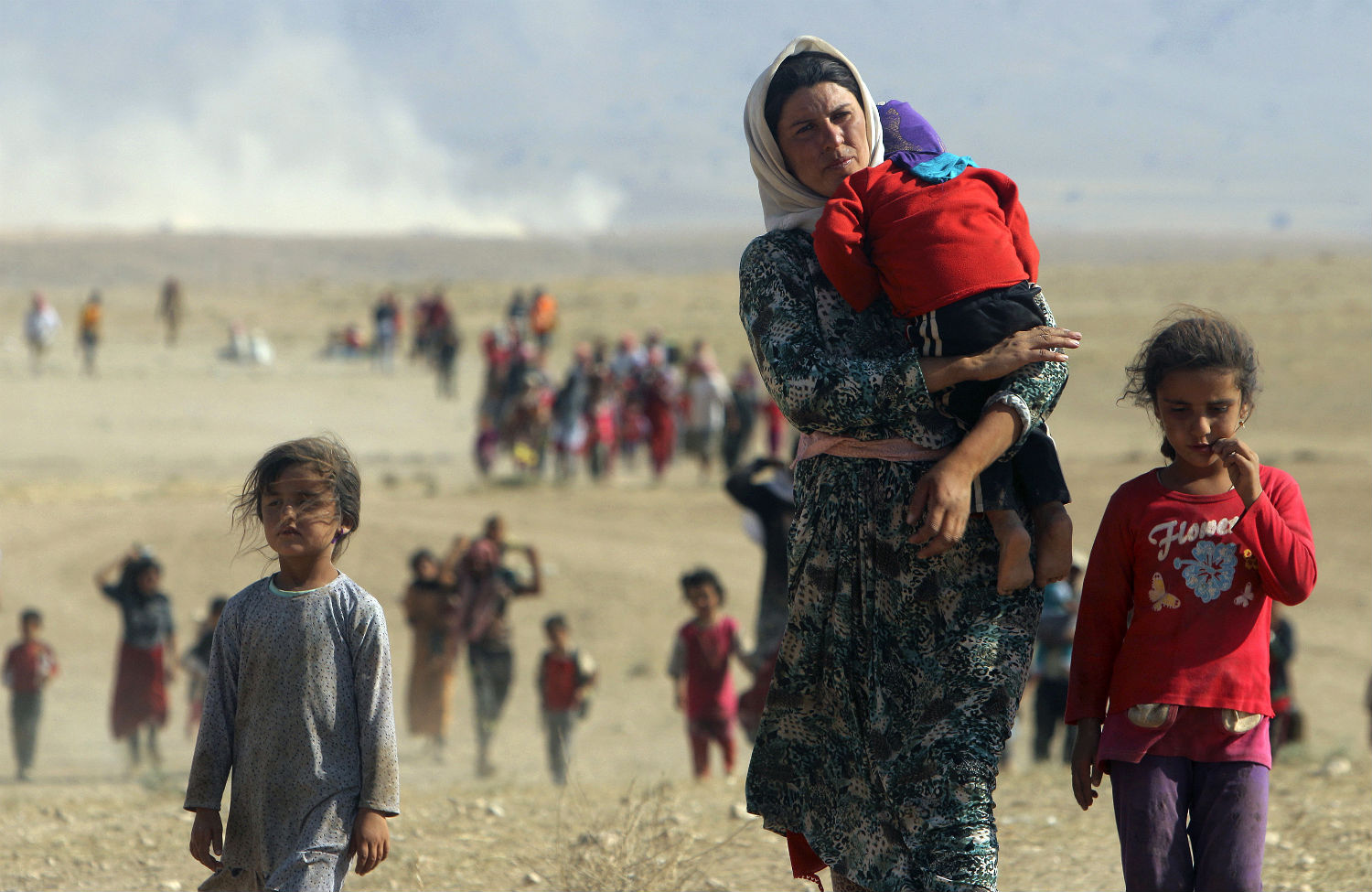 Erbil— Ali Ahmed Hassan, 31, sits on the floor of his one-room portable metal home in the sprawling Baharka refugee camp on the northern outskirts of Erbil, reflecting on the sectarian warfare that has forced him to flee with his family to the autonomous Kurdish region of Iraq. Horrific bloodshed and reprisal killings—inflicted by the Sunni extremists of the self-proclaimed Islamic State, or ISIS, as well as the Shia militias—has torn apart his homeland and is leaving long-term, festering wounds, he says. Now he would rather build a future as a minority under Kurdish control than return to his home. Indeed, the muddy streets of refugee camps like this one are some of the last places in Iraq where you can still find multi-ethnic and religious coexistence.

An emergency-room doctor by training, Hassan, a Sunni Arab, first fled Iraq’s Diyala province after the Iranian-backed Shia militia Asa’ib Ahl al-Haq carried out a bloody campaign of attacks against Sunni civilians in 2012. He then settled in the Sunni-majority city of Tikrit, until the atrocities that followed the 2014 blitzkrieg by ISIS forced him to escape once again, to the capital of the Kurdistan Regional Government.

“[ISIS] came to that area in the name of Islam, but the religion doesn’t say you should kill kids and women,” he says, with despair etched on his face. “Daesh [the Arabic acronym for ISIS] requires all government employees to work in their positions, and I couldn’t work under their rule.” Now Hassan is unable to apply his life-saving skills to support his family. Instead, he uses the medical tools he brought with him and the meager supplies he can get from local hospitals and charities to treat camp residents.

“I have interviewed with the Iraqi government health ministry, and they clearly don’t care about us,” he says bitterly. “[All sides] have planted a division between us, Shia and Sunni.”

Hassan feels betrayed by a Baghdad government that panders to Shia interests, even as it battles the brutal fundamentalist Sunni authoritarians who have seized vast swaths of northern and western Iraq. His experience of repeated flight from a continually morphing conflict is common in Baharka camp, which stretches as far as the eye can see.

“It’s very clear that sectarianism has defined Iraqi politics and the security situation since 2003,” says Renad Mansour, an Iraq specialist at the Carnegie Middle East Center. “We are still experiencing the initial shock and ripples of the [US] invasion.” Mansour argues that religious divisions have opened up fundamental questions about what it means to be Iraqi. Even after the first wave of sectarian conflict receded, both the former government of Nouri Kamal al-Maliki, which was Shia-dominated and close to Iran, and Sunni tribes increasingly described each other as not Iraqi. The current government of Prime Minister Haider al-Abadi has been unwilling or unable to contain that trend.

Mansour points out that those divisions emerged under US control, and that the American occupation instilled inter-religious and ethnic conflict, though he contends that the US troop surge of 2007-08 and American pressure on Maliki in the initial period of his government temporarily stemmed it.

But that pressure didn’t last. “For years the US thought Maliki was their guy.… So they excused him as he continued to centralize power,” Mansour says, citing Emma Sky’s book The Unraveling: High Hopes and Missed Opportunities in Iraq. “They continued to stick behind [Maliki]…. They were just too late to recognize what they had done and the destruction he had caused.”

The result was a harsh government crackdown on mass, unarmed Sunni protests in 2012-13, which radicalized people and laid the groundwork for initial Sunni sympathy for ISIS. Still, Mansour is a cautious optimist, believing that the jihadists’ intense repression of anyone who doesn’t adhere to their puritanical ideology has the potential to not only unify Shia and Sunni but also the United States and Iran in a common struggle against them.

Yet the reprisals carried out by Shia militias after this year’s reconquest of Tikrit—as well as Baghdad’s refusal to arm Sunni tribes to push back ISIS from Ramadi and the rest of Anbar—have not given Sunnis an alternative to fight for. Instead, Abadi’s government has mobilized the same militias that have carried out sectarian violence against Sunni civilians to retake Sunni-majority Anbar. The operation has even been code-named after the revered seventh-century Shia imam, Hussein—a rallying cry that will not exactly endear ISIS-opposed Sunnis to the cause. Even the firebrand Shia cleric Moqtada al-Sadr has acknowledged that it “is going to be misunderstood, there is no doubt.”

Mansour points out that in a political system defined by sectarianism, Abadi’s government feels the need to pander to the more hardline Shia politics of Maliki, who still has enormous influence in Baghdad despite being out of government. At the same time, Sunni tribes are forced to react to the polarization intensified by the self-proclaimed cross-border caliphate of ISIS, which has reshaped politics in Iraq and Syria through mass torture, rape, and murder.

Ethnic tensions between Iraq’s Arabs and Kurds add another debilitating schism to the country. The long history of Baghdad’s marginalization of and brutality toward Kurds has led the US-backed Kurdish nationalist leadership of Massoud Barzani to focus on independence.

Since seizing the ethnically and religiously diverse province of Kirkuk and its vast oil fields in the summer of 2014, the Kurdistan Regional Government’s military forces, called peshmerga, have used the province’s front line with ISIS to demarcate the border of a future Kurdish state. Tension is thick in Kirkuk city, which has been cantonized among Kurds, Turkmen, and Sunni and Shia Arabs. For now the Shia militia forces, the peshmerga, and the PKK (the battle-hardened militia of the Kurdistan Workers’ Party in Turkey, which fought a three-decade-long struggle for self-determination against Ankara and has recently joined the military campaign defending Kurdish regions of Syria and Iraq against ISIS) sit side by side just outside the city, with their guns pointed at ISIS across the little Zab River in a tense alliance of convenience.

It’s an uneasy relationship. Between the blast walls that separate the diverse communities of the city, ISIS suicide bombings and Shia militia attempts to rival Kurdish military dominance have created palpable social hostility.

“Shia guys hate Kurds,” says 27-year-old Kurdish resident of the city Karwan Yasin. For this young man, who studied art and works in a small convenience store, the feelings are mutual. His family’s history in Kirkuk goes back generations, and he sees the city as the rightful territory of a future Kurdistan.

Many of the refugees now in the camps around Erbil passed through Kirkuk as they fled the violence further south, but even though some look to build their future in a sovereign Kurdish state, this region is not free from ethnic persecution.

On the road to Sinjar Mountain, where Kurdish forces and Yazidi fighters drove out ISIS last winter, some Arab villages have been completely evacuated after massacres of civilians, revenge for the gruesome atrocities committed by jihadists last year against Yazidis and Kurds. Just off the bomb-cratered roads, the war-wrecked villages sit empty next to re-inhabited Yazidi communities.

Showing me a mass grave where 37 Yazidis of all ages were beheaded in the empty town of Khansor, home to 38 000 people before ISIS invaded, peshmerga Lieut. Lokman Koli Ibrahim acknowledges and condemns the revenge killings of Arab civilians. He describes finding the bodies of women and children murdered after Yazidi volunteers took control of Sibaya at the end of January.

When I visit Sibaya, I find an empty ghost town populated by only a few peshmerga fighters, who have set up an outpost in an abandoned house. They deny committing reprisals against Arab civilians; they even deny that the stripped village was ever Arab. Seeing the wreckage in Sibaya and Khansor drives home the harsh fact that all over Iraq, this war is drawing ethnic and religious borders in blood.

As the country increasingly devolves into Shia, Sunni, and Kurdish-controlled regions, Iraq’s smaller minorities (along with others who don’t want to live under singular religious or ethnic rule) are left without a broader society.

“Sarah” is a Chaldean Christian refugee who fled the ISIS invasion of Mosul with her family in June 2014 and now lives in Baharka. She declines to give her name because of threatening phone calls she describes receiving from ISIS militants after they seized her church’s registry. She continues to worry for her family’s safety, despite being in Erbil.

Boiling water for pasta on a single gas burner inside her cold, one-room metal home, she says that the war has left her husband, her 19-year-old daughter, and her entire community without a future in Iraq. “I will never go back to Mosul; it will never be secure for Christians again,” she contends as she stirs noodles while local news of fighting between Kurds and ISIS plays on a small TV in the corner.

Her family is part of an Assyrian Catholic community that has lived in Mosul, Iraq’s second-largest city, since the 15th century. Her husband ran a furniture store in the city, but with their home and business destroyed, he now sells cigarettes in Erbil’s streets. She feels the conflict has erased her community’s place in Iraqi society.

American-led coalition airstrikes continue to hit Mosul on regular basis, but there is no sign that the city is any closer to being liberated. Peshmerga forces have surrounded Mosul on three fronts, yet the Kurdish leadership has displayed little interest in actually retaking the majority-Arab city, instead concentrating far more energy on solidifying their dominance in Kirkuk.

“To some extent, America is responsible for our situation,” Sarah says of Washington’s legacy and approach to the ongoing violence.

America is back at war in Iraq less than five years after it was supposed to have quit, bombing to solve a divide it set in motion while bolstering partners who only deepen the quagmire of religious and ethnic conflict. While ISIS is responsible for much of the current violence, the reality for those in refugee camps is that this shattered country is being pulled apart by all sides.