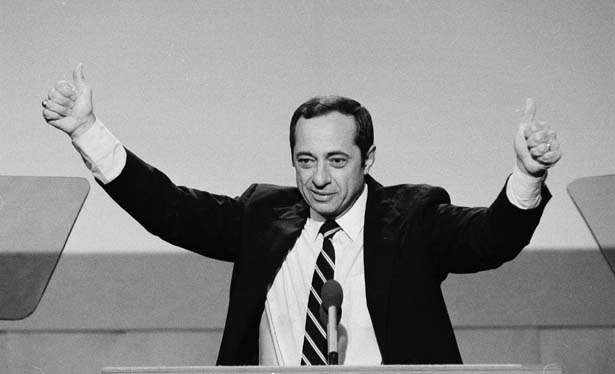 When the Democratic convention was held in San Francisco (a city hit particularly hard by AIDS) in July of 1984, all of the different currents of liberal protest came together well aware that the party had little chance of regaining power against a popular president buoyed by a booming economy. Many had expected that Ted Kennedy would provide the keynote speech, but Walter Mondale, perhaps nursing grudges from 1980, insisted upon a lesser-known if no less compelling political figure: Mario Cuomo.

New York’s first-term governor drew upon a deeply compelling life story as he rose to the platform and introduced himself to the rest of America. He was born in 1932, the youngest son of Italian immigrants. His father, Andrea, had arrived six years earlier and cleaned storm sewers before acquiring a small grocery store in South Jamaica, Queens, the year before Mario’s birth. The store was open twenty-four hours a day, and as a boy Mario worked there after school with the rest of his family. Often hiding out in the back of the store, Mario developed a quiet and thoughtful persona. He became an altar boy and, unlike many of his fellow young South Jamaica residents, actually enjoyed Sunday school and the solitary act of reading. Like so many second-generation sons and daughters of immigrants, Mario struggled with his parents’ ethnic provincialism, particularly their embarrassing difficulties learning English.

Cuomo attended St. John’s University, where he played baseball well enough to make it to the minor leagues, and then went on to St. John’s Law School, earning his degree in 1956. St. John’s was hardly the Ivy League, a fact that burned inside young Mario, who never lacked confidence in his intellectual abilities or willingness to work hard. When he received no offers from elite law firms, he blamed anti-Italian prejudice, which undoubtedly played a role. This early experience with exclusion, whatever its inspiration, served as a blessing in disguise because it facilitated his entry into public service and inspired the passion he brought to it. Cuomo served as a law clerk with the New York State Court of Appeals and then became an advocate for Italian residents in Queens who were fighting the development of a high school in their neighborhood that would have destroyed sixty-nine homes—the so-called Corona Fighting 69. Mayor Lindsay noted his skills and hired Cuomo as a mediator in a heated dispute over a public housing development proposed for Forest Hills. He won both community and political support and impressed pretty much every political professional in the city. (Jimmy Breslin, the 1970s equivalent of Damon Runyon, went so far as to compare the young lawyer to the now-sainted Bobby Kennedy.)

But Cuomo’s success in politics proved fitful at best. Famously, even ostentatiously cautious, he had been compared with Hamlet in the outer boroughs of New York long before he began to drive the national press corps to distraction with his inability to make up his mind about his next move. After considering and rejecting a 1973 run for New York City mayor, he ran for lieutenant governor in 1974 and was badly defeated, but Governor Hugh Carey came to his rescue by appointing him secretary of state for New York. Then, in 1977, Cuomo did decide to run for mayor and stepped into a protracted political battle. In the Democratic primary—the only one that mattered—he faced not only Bella Abzug and Abe Beame but also Ed Koch, who, like Cuomo, enjoyed considerable outer-borough appeal with the kind of people who were almost ready to give up on the national Democratic Party and become what would be called Reagan Democrats. A huge stumbling block for Cuomo was his adamant opposition to the death penalty. However symbolic his stance on it might have been—New York City mayors had no authority related to criminal penalties whatsoever—the issue resonated loudly, as did any related to race and crime, particularly after the city’s horrific 1977 blackout and crime spree. Cuomo found himself spit upon at campaign events whenever he spoke against the death penalty, which, against all advice, he insisted on doing. After Koch won handily in a nasty runoff between the two, Cuomo began to take on the persona of a beautiful loser—a man who stuck to his principles and picked fights that increased his unpopularity but won him the admiration of pundits and romantics.

Cuomo avenged this defeat five years later when Koch foolishly tried to make a run for the governor’s mansion, a job for which he was particularly unsuited, given his open contempt for rural and suburban life outside the city. Cuomo, in contrast, shined in the governor’s office, delivering beautiful speeches that somehow combined the best elements of sermons, seminars, and stem-winders, and demonstrated his thoughtfulness on issue after issue as he sought to find a middle ground between contemporary liberalism and those who felt themselves to be its victims.

Hopes were high among convention delegates as Cuomo took the stage, more than a few of them already wondering whether he might be their candidate four years hence. And he did not disappoint. The speech’s opening lines became etched in the permanent memory of liberal moral stock:

Ten days ago, President Reagan admitted that although some people in this country seemed to be doing well nowadays, others were unhappy, even worried, about themselves, their families, and their futures. The President said that he didn’t understand that fear. He said, “Why, this country is a shining city on a hill.” And the President is right. In many ways we are a shining city on a hill. But the hard truth is that not everyone is sharing in this city’s splendor and glory. A shining city is perhaps all the President sees from the portico of the White House and the veranda of his ranch, where everyone seems to be doing well. But there’s another city; there’s another part to the shining city; the part where some people can’t pay their mortgages, and most young people can’t afford one; where students can’t afford the education they need, and middle-class parents watch the dreams they hold for their children evaporate.

Continuing to deploy this “two cities” theme, he documented elderly people sleeping in basements and the rise of homeless people on city streets. Cuomo explained: “In fact, Mr. President, . . . this nation is more a ‘Tale of Two Cities’ than it is just a ‘Shining City on a Hill.’” He then made clear that Reagan could never really understand this problem, because he believed that “what falls from the table will be enough for the middle class and those who are trying desperately to work their way into the middle class.” Cuomo then reminded his listeners of the moral vision and the alternative that was at the heart of American liberalism.

Cuomo understood that he was addressing an audience of fiercely polyglot groups, and he could no longer draw upon the image of America as a melting pot, a blending together of difference into a stew of assimilation and nationalism. Cuomo recognized how their identities gave many people’s lives their principal meaning, in conjunction with their families and communities. He spoke of his father as “a small man with thick calluses on both his hands” who came to America “uneducated, alone, unable to speak the language.” But, Cuomo argued, his father’s background hadn’t locked him into his identity but pushed him to something larger. From the identity of white ethnics was carved the massive edifice of the New Deal, Cuomo reminded his listeners. His parents had “asked to be protected in those moments when they would not be able to protect themselves. This nation and this nation's government did that for them.” And Cuomo wanted to do so again.

Pluralistic identities could be retained, but liberalism depended on something that transcended them as well—a sort of “transnational America” that the social critic Randolph Bourne had envisioned earlier in the century, a recognition of identity as against assimilation, an appreciation of difference, but also a pluralism that could still weave together a wider sense of a “beloved community” at the national level (what Bourne called a “cosmopolitan federation of national colonies” to replace the now obsolete “melting pot”). Cuomo came to this vision not from left-wing ideology or commitment to political activism but from his grounded Italian Catholicism and his love and loyalty to family and neighbors:

We Democrats believe that we can make it all the way with the whole family intact, and we have more than once. Ever since Franklin Roosevelt lifted himself from his wheelchair to lift this nation from its knees—wagon train after wagon train—to new frontiers of education, housing, peace; the whole family aboard, constantly reaching out to extend and enlarge that family; lifting them up into the wagon on the way; blacks and Hispanics, and people of every ethnic group, and native Americans—all those struggling to build their families and claim some small share of America. For nearly fifty years we carried them all to new levels of comfort, and security, and dignity, even affluence. And remember this, some of us in this room today are here only because this nation had that kind of confidence.

The cheers resounded for what felt like hours. Delegates hugged one another and wondered, however briefly, if the Democrats might not have a shot at winning the election after all. They didn’t, but Mario Cuomo did succeed in helping to forge a new liberal vision so desperately needed by all sides at once, one that honored cultural difference but embraced the ethic of teamwork and economic opportunity for all: a patchwork quilt rather than a melting pot.

Editor’s note: The above is drawn from The Cause: The Fight for American Liberalism from Franklin Roosevelt to Barack Obama (Viking/Penguin, 2012/2013) by Eric Alterman and Kevin Mattson.