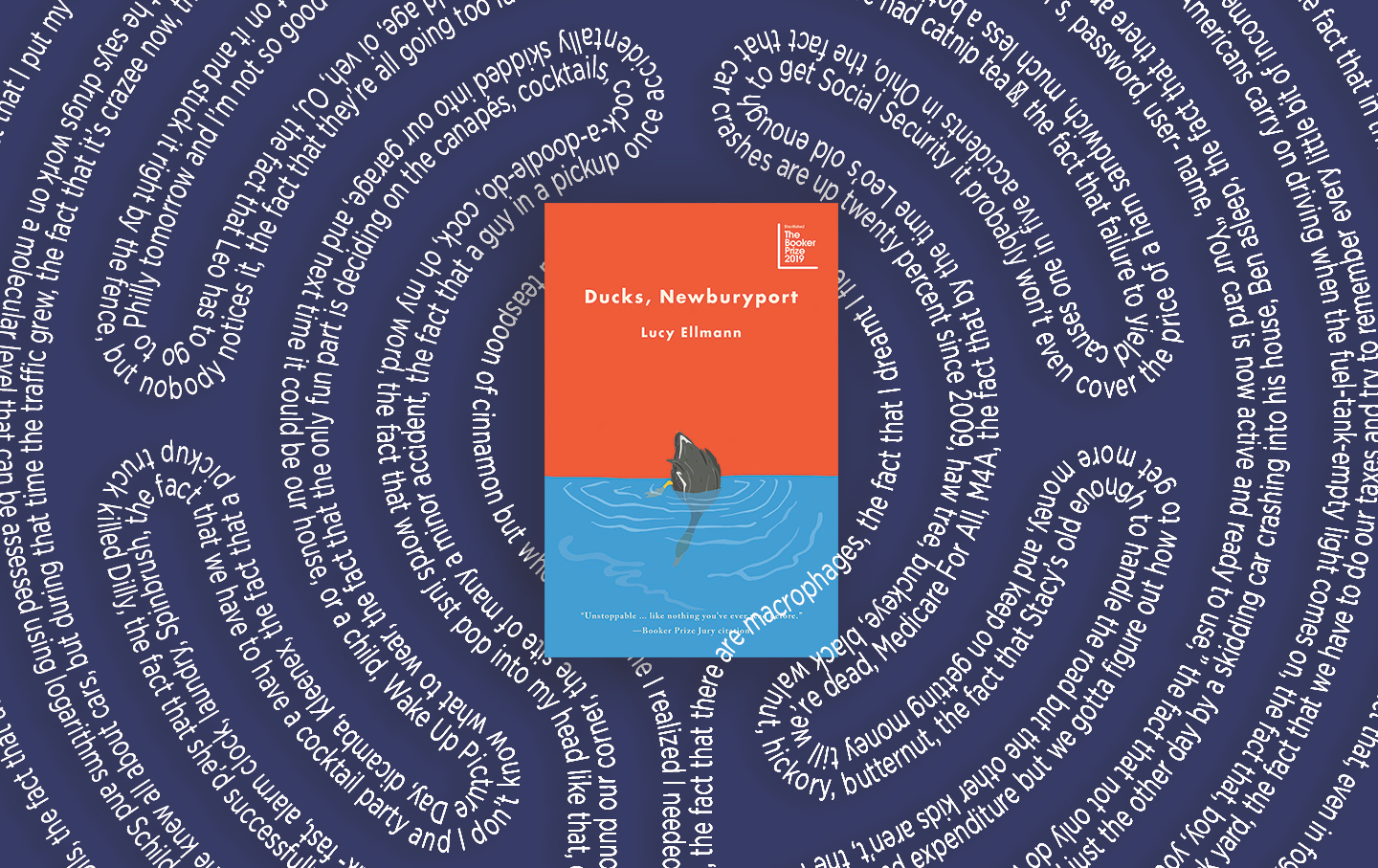 “There is a something that broods over our Mid-American landscapes that can save us all if we will but give our selves,” the American novelist Sherwood Anderson wrote in 1920. Anderson’s masterpiece, Winesburg, Ohio, had been published the previous year. It presented a tableau of American loneliness through the interconnected lives of some two dozen obscure Ohioans. Spiritually inarticulate, adrift in ennui, Anderson’s rural neurotics reveal themselves in quirks and foibles, dead-end conversations and insomniac dithering, desires repressed or ignored. Their longing occasionally spasms into impotent expression. We hear the failed ambition of the priest or poet when George Willard, Anderson’s proxy, whispers his scattered fragments to the sky: “Death, night, the sea, fear, loveliness.”

Something of Anderson’s sensibility haunts novelist Lucy Ellmann’s Ducks, Newburyport, though it is deployed to different aesthetic and intellectual ends. The novel’s unnamed narrator, herself an Ohioan, mentions Winesburg several times over the course of her tale. She is a middle-aged wife and mother and a baker of some small renown. While she is ostensibly more fixed and substantial than Anderson’s thwarted subjects, her pervasive anxieties mark her as a resident of that desiccated hamlet a century removed. But Ellmann’s novel is too ambitious to merely retread Midwestern pathologies. It delineates a more comprehensive diagnosis of American estrangement. The anomie that Anderson described is here contemporized at scale, shown to be less a regional phenomenon than an emerging national catastrophe.

To begin with a practical statement: This is a very long book. Much has been made of its structure—the novel’s 1,000-pages are mostly comprised of a single sentence—though it does not present the conventionally onerous formal gauntlet of, say, Ulysses. Eccentric and recursive, its language eschews modernism’s tangled poetry for something more recognizably contemporary. The detritus of digital and popular culture is embedded, shard-like, in the mesh of the narrator’s ever-unspooling mind. Even the most deeply personal of her digressions is marbled with distraction and quotidian incident: Clickbait headlines trespass in memory; pop lyrics underscore ecological despair; movie synopses abrade familial anxiety.

As an organizing principle for such disparate material, Ellmann makes repeated use of a particular clause, “the fact that”—as in “the fact that I was doomed the minute Mommy got sick,” or “the fact that I wonder if women have always remembered their dreams while they’re cooking”—to form a network of provisional connections. A thought appears, achieves a brief centrality, submerges, and is hauled up again—sometimes 100 pages later—into freshly spun webs of association. These larger threads are lined by word games and homonyms, the inexplicable cilia of thought: “the fact that they’re not sea anemones, amenities, anomalies, enemies, anomie, entropy.” The half-glimpsed meanings of such slips suggest the hidden labyrinth of a pliable, vascular mind.

Our narrator’s life is neither traditionally interesting nor heroic. The domestic, with its pitched battles, habits, complaints, and too-familiar comforts, is operative throughout. Her husband, a civil engineer, inspires the novel’s most tender passages—“he loves me, and that makes everything bearable”—though the narrator rarely seems to feel worthy of his adoration. Her four children unwittingly induce a majestic maternal guilt as inheritors of the world’s moral and ecological ruin. (The children’s own anxieties, as related by the narrator—one reads harrowing environmental facts aloud from Wikipedia, while another is increasingly taken by the manufactured élan of influencer culture—bear witness to America’s intergenerational malaise.)

This propulsive burble sustains a subtle investigation of the family as a nexus of labors, and how that variety of work both enriches and attenuates the narrator’s soul. A sense of weariness attends many pages, a kind of heavy, vicarious accountability. Her domestic obligations comprise a perpetual motion machine in which the resolution of one problem ensures another’s inception. There is little bitterness here (her continuous, devoted love is, on the contrary, courageous), though it can occasionally manifest in exhaustion: “I’m too busy heading off everybody else’s dissatisfactions just so they’ll leave me alone.”

One of the 20th Century’s Great Novels of Dislocation

The single-day premise of many notable stream-of-consciousness novels is jettisoned here for something more dilated. While discrete units of time aren’t offered, the reader follows the narrator through a series of ordinary events over a period of perhaps several months: She bakes pies, gets a flat tire, has her teeth cleaned, speaks with delivery men, goes to the mall, adopts a dog. These aren’t plot elements so much as brief excursions out of thought’s abstraction. They serve to hold the diaphanous fabric of her consciousness down with the pegs of a shared, social, and even necessarily boring reality. (Banality has a fabulous pedigree in the novel’s formal predecessors: Leopold Bloom considers mutton; Clarissa Dalloway visits a florist.) To leap from the trivial to the visceral is one of the great tricks of the stream-of-consciousness novel, one that Ellmann deploys skillfully here.

Memory is the novel’s contrast dye, revealing much that is obscured by the surface density of the mind. The curious reluctance of the narrator’s thinking—“there’s a lot you just have to blank out if you want to get through life”—is a byproduct of mortality: her own and that of the people around her. We discover she is in remission after a recent battle with cancer, though it is the loss of her mother, some years before, that has arrested her life’s forward momentum:

…I’m malformed, and accident-prone, the fact that I never got a handle on life or how to love people, the fact that I’m injured, broken, like an egg thrown out of the nest, the fact that my life just never really got off the ground because of Mommy’s illness….

Ellmann scatters these clues—the cancer, the dead mother—like breadcrumbs in the thicket of her heroine’s consciousness. Contrivance is avoided by the judicious pace of each revelation. The reader is expected to track, sieve, deduce, connect. A melancholic composite assembles over time, a kind of lonely cognitive effigy:

…everybody’s life is bound to go wrong eventually, because we all pass away, me, Leo, the kids, Mommy, Abby, ISIS terrorists, everybody, and that’s the worst thing that could possibly happen, that you disappear off the face of the earth…

Interwoven with the main narrative are interstitial scenes in which a mountain lion tracks her abducted cubs in the lands around the narrator’s home. Unlike the loosely associative flow of the rest of the novel, these sections are written in tight, semi-lyrical realist prose. The parallels between the narrator and the lioness—two mothers navigating a hostile world, largely for the benefit of their children—are too obvious, particularly given the subtlety of the narrator’s confessions. These interruptions only serve to compromise the hypnotic pleasure of a mind speaking to itself. The mountain lion’s journey intersects meaningfully with the narrator’s life late in the novel. If this feels a little preordained, at the very least we’re given wonderfully cutting indictments of humanity from a haughty feline perspective: “People had no playfulness. They were clumsy, methodical, repetitive creatures, graceless and brutal—and full of exasperating unconcern.”

That unconcern is at the heart of the novel, a kind of bellows that stokes the fire of the narrator’s outrage. Ellman adeptly riffs on a vertiginous range of subjects (indigenous peoples, environmental catastrophe, gun violence, animal cruelty, indecency, extinction, aggression, consumerism), all while carefully avoiding the didacticism that would warp the novel into either a soapbox or a gallows. Her heroine’s anger burns cleanly, refusing the easy conflagration of self-righteousness. The cumulative effect is devastating. This is a powerful and deeply felt indictment of American moral failure, a fearful, dazzling bloom of conscience.

Repeated throughout the text is a gleaming fragment: “the numbness of muted beings.” It strikes me as a Winesburgian phrase, a lament of dislocation. In the intermittent bouts of horrible clarity that we discover between climate dispatches, mass shootings, and humanitarian disasters, such numbness has become commonplace. American spiritual deprivation is a consequence of many things, not least of which is a sense of our lives being crushed by systems too large to properly articulate, let alone defend ourselves against. The narrative technique of Ducks, Newburyport is itself a kind of coping mechanism, a grand mimetic achievement. The novel’s length is, in the end, something of the point.