We don’t usually think of reality television as a force for good, but there’s some evidence that it can be. The classic example is MTV’s 16 and Pregnant, which is credited with having a significant impact on the teen childbearing rate and helping Americans understand the particular challenges of young motherhood. Could the form provide the same kind of insight into the lives of those newly freed from jails and prisons?

Just finishing its second season on We TV, the increasingly popular show Love After Lockup offers a look at reentry for the formerly incarcerated. Following couples that maintained relationships while one member was behind bars, viewers see a little bit of how different partners keep up communication before release, their joyous meeting after, and how they start to build a life together. But this being reality TV, things don’t usually go well, especially because many of the characters are engaged to people they haven’t met face-to-face. Rather, there’s an unending cascade of diverse disasters, from drug relapses to parole violations to regular old incompatibility. Sometimes it’s tragic, sometimes it’s funny, and sometimes it’s hard to tell the difference.

Take the most dramatic example from this season: Michael is a young father who married Sarah, the mother of his child, while incarcerated on a parole violation. At the same time, he began a relationship with another woman, Megan. When it’s time for his release, both women are expecting to settle down with him. Watching Michael try to keep all the plates spinning is entertaining, and as far as the genre goes, watching him dodge his wife so he can take his girlfriend’s virginity is edge-of-your-seat, cover-your-eyes material. But the tone changes when, driving back from a secret rendezvous with Megan, Michael makes an innocent navigation error that leaves him 10 minutes late for a meeting with his parole officer.

Unlike everyone else on the show, the officers who meet Michael as he drives up haven’t signed a release, and when they meet Michael at his car, their faces are blurred. In the age of cell-phone cameras, reality-TV characters don’t always need a crew everywhere they go, which means the cops aren’t shy about behaving like dicks as they normally would. The viewer knows Michael exclusively as a slick-talking jerk, who’s playing it about as close as you can get to bigamy without switching shows. And yet, his misdeeds don’t justify his treatment at the hands of the criminal-justice system; they can’t. His faults are (achingly, cringingly) human, but in the way the system is so careless with his life, we see how it treats him as less than human. We learn about him as an individual, only to watch him run smack into a system that can’t see him as a person. The juxtaposition between the two systems is disturbing in a way that more somber forms can’t manage. 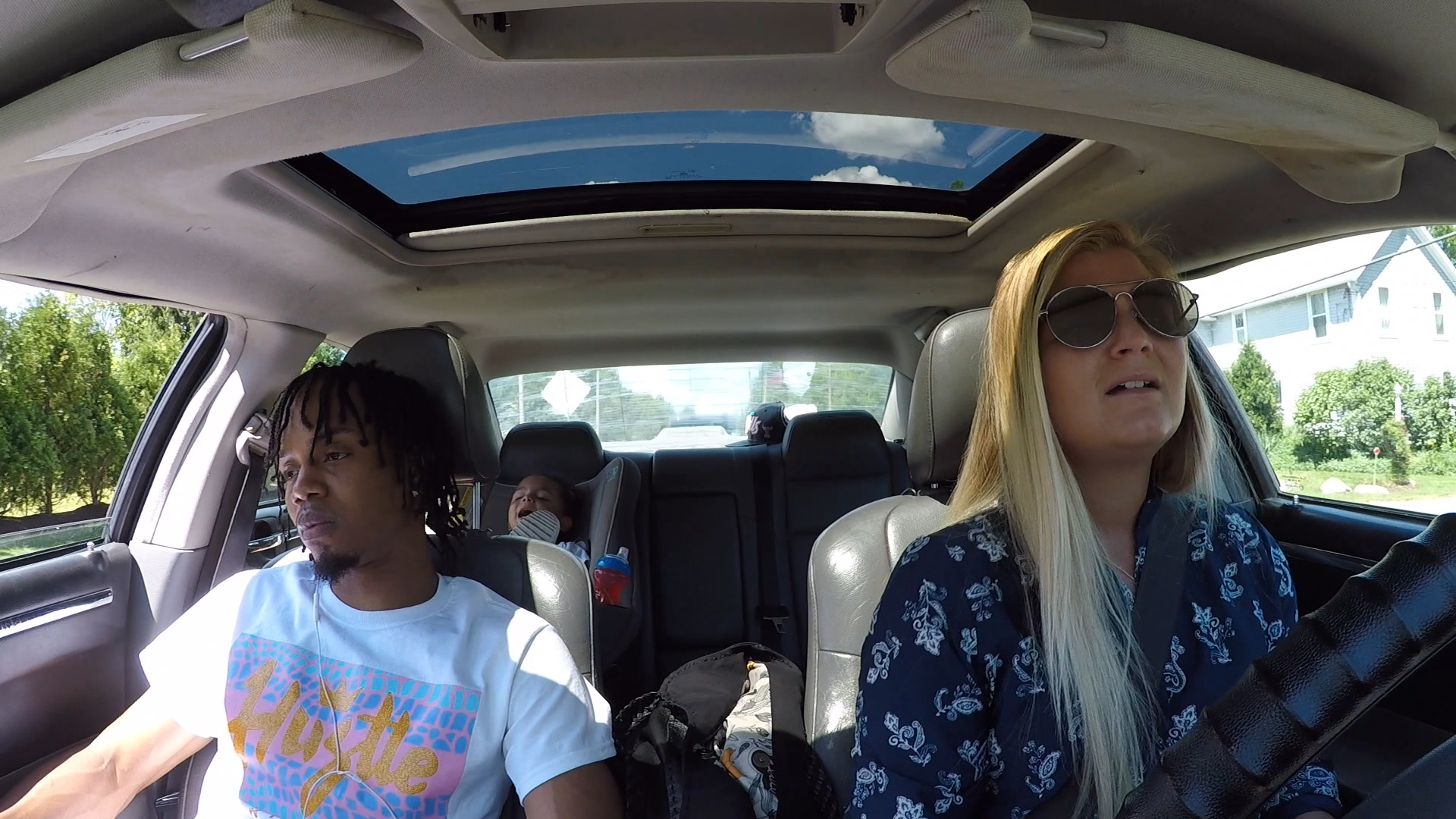 Michael and Sarah (Courtesy of We TV)

Most of the characters in Love After Lockup—like most formerly incarcerated people—don’t have a history of violent damage to others. What they do have—like all of us—is a tangle of complicated relationships, needs, and desires. Reality TV thrives on dumb decisions, but so does the criminal-justice system, and when they’re put on the same screen, it’s the former that’s less exploitative. In the show’s first season, a former model named Alla is having trouble adjusting after serving a multiyear sentence for heroin distribution, despite (or perhaps partly because of) the presence of her not-very-understanding fiancé, James. We don’t see her relapse on screen, but the viewer notices that she’s fallen off the wagon before James does. If it’s icky or wrong for reality-TV producers to watch and profit from a woman’s predictable suffering without helping, it’s doubly so for a state institution to use her pain as an excuse to cause more suffering via reincarceration, which is what happened to Alla. There’s no comparison between watching reality television and holding someone imprisoned for years.

Drugs are an issue for a lot of characters on Love After Lockup, as they are for a lot of characters on reality TV more generally. But where shows focused on recovery hold to sentimental, tragic stories, and shows focused on drunks behaving erratically stick to the laughs, Love After Lockup captures the full tragicomic totality. In the second season, a woman named Tracie gets released and meets her fiancé, Clint, but on their wedding night, things go wrong. In an amazing moment of TV, Clint calls his mom in the morning, the hotel room trashed, the rental car gone, to tell her that Tracie has a problem: “Motherfucking crack!”

When we meet Tracie again, she’s locked up, but still upbeat, and with a “Clint” tattoo. For his part, Clint still seems devoted, yelling, “I love you Tracie!” at the jail. By refusing to slot the characters into one clichéd narrative or another, the show makes the criminal-justice system look intolerant and mechanical by comparison. The audience probably doesn’t want to hang out with many of the characters, but we don’t want them cruelly removed from society and kept from everyone who cares about them, either. 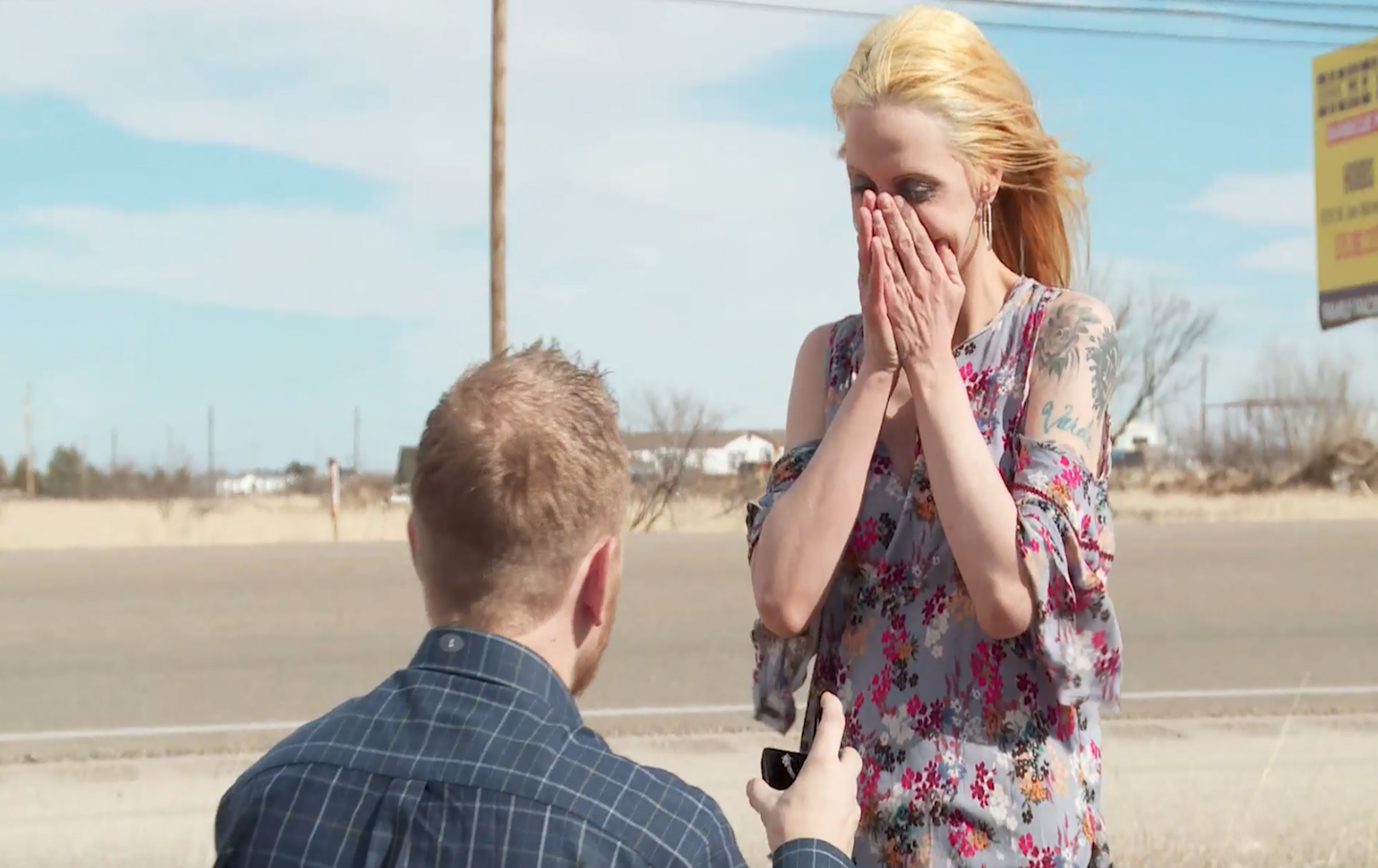 Tracie and Clint (Courtesy of We TV)

When they leave lockup, many Americans aren’t just free, they’re under either, “supervised release,” probation, or parole. These restrictions make it hard for the characters to get on with their lives. Instead, they’re kept under a carceral regime of restriction: They often can’t drink to celebrate; they can’t spend time with other ex-convicts; some can’t even drive. On Love After Lockup, we see how, rather than freedom as we commonly understand it, supervised reentry means you’re expected to jail yourself. Anyone would struggle with that, and the viewer watches as our characters (and their relationships) are set up to fail; we see how easy it is to end up on the criminal side of the law. Advocacy for the incarcerated often portrays its subjects as morally pure or innocent of wrongdoing, but conduct is not what makes a person deserving of humane treatment. Humanity alone does that, and there’s more on display here than in other, better-intentioned works of television.

For the show’s characters, leaving lockup mostly means entering a new world of total dependence. They don’t have their own places to live, their own means of transportation, or their own money. Finding a job is tough, and the focus on intimate relationships clarifies the way they often function as work, as ways to obtain life’s necessities and as sites of labor. For prisoners, this kind of relationship work is one of the few jobs they can do from behind bars that pays better than the literal legalized slavery that’s officially allowed. (One character claims to have received $800,000 from various men during her incarceration in exchange for pictures and attention.) Without the help of their partners, it’s not clear what some of the characters would do with themselves, and the show demonstrates that the system does not care.

One of the most subtly meaningful moments in the second season comes when Matt—a real shithead with a vocal love for meth and at least one visible white-power tattoo—gets an interview for a job doing construction. The potential boss asks Matt to show him what he’s capable of by painting a wall, but wanting to make a good impression, Matt has worn a white pair of sneakers—his only decent shoes—and his only pair of clean pants. Asked to audition for a job that’s by no means guaranteed, he calculates he can’t take the risk. It’s not unreasonable or even not unwise, but it’s disqualifying for the employer. Matt can’t find a job, and by the end of the season he’s gone back to jail for possession of a stolen vehicle.

As viewers of a reality show, we’re always implicated in the setup. But as taxpaying viewers of Love After Lockup, we’re implicated in a different, even more brutal system. It’s worth the first to get at the second.