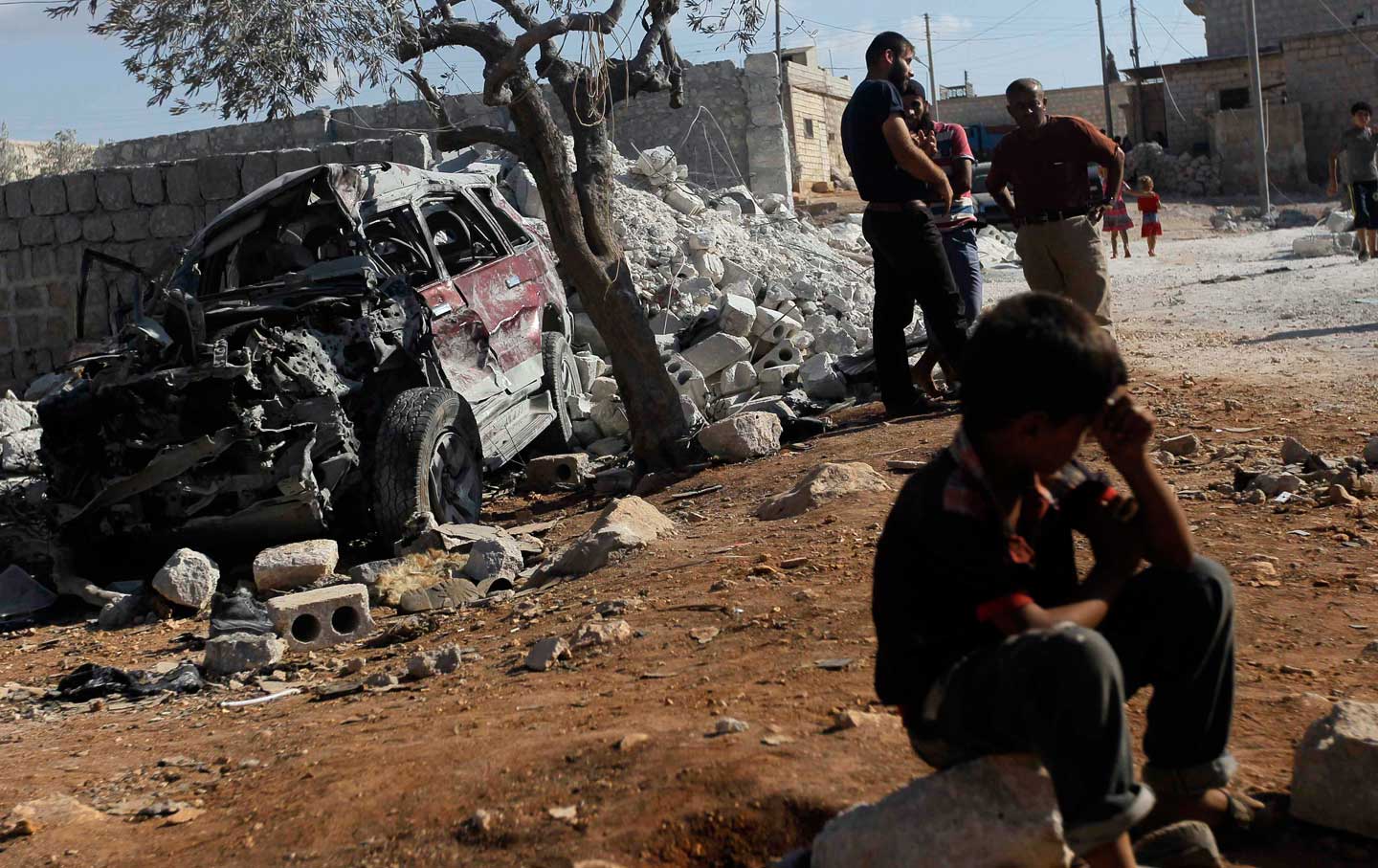 Residents inspect a damaged site in what activists say was a US strike in Kfredrian, Idlib province, September 23, 2014. (Reuters/Abdalghne Karoof)

More than two weeks have passed since the lifeless body of 3-year-old Aylan Kurdi washed ashore on a Turkish beach, forcing the world to confront the tide of Syrian asylum seekers massing at Europe’s borders. In the grim aftermath, the international response has both impressed and disappointed, as millions of hero-citizens have taken to the streets to demand compassion and offer support—and millions of others have countered with bigotry. A few countries have cracked open their borders; too many others have slammed them shut. Yet, as debate has raged over how best to respond to the crisis, there has been shockingly little discussion as to why the refugees are fleeing Syria—and how the last four years of botched international policy has helped trigger the refugee exodus.

Of the thousands crossing the Mediterranean, most are fleeing the orgy of violence unleashed four years ago by President Bashar al-Assad against the citizens of his own country. That violence burst into view with the death of another young boy, 13-year-old Hamza al-Khateeb, whose brutal murder at the hands of police in the town of Daraa served as a kind of bloody prologue to the drowning death of Aylan Kurdi. Much like Kurdi, al-Khateeb was swept up by events far bigger than he was; after joining friends and family at an April 2011 protest, he was detained and then tortured. As images of al-Khateeb’s mutilated young body circulated across the Internet, mass protests erupted across Syria—from Daraa to Damascus, Aleppo to Homs—only to be met by the full, punishing force of the Assad military.

If the world’s powers had set their red line then, at the torture of al-Khateeb and the regime’s decimation of Daraa, it is possible that there might have been no refugee crisis today. But instead of supporting the revolution when it was a largely unarmed affair, the globe’s power players turned Syria into a geopolitical chessboard, actively sponsoring various sides of the conflict without concern for the civilian population. The United States and its Gulf allies pumped money and weapons into a murky constellation of rebel factions, empowering Al Qaeda affiliates that indirectly spawned the rise of the so-called Islamic State, or ISIS. Meanwhile, Russia and Iran funneled weapons, training, and funding to Assad and Hezbollah, the Lebanese Shiite militia, ensuring that the regime stayed afloat even as it subjected an untold number of Syrians to industrial-style torture and the terror of barrel bombings.

The result of all this shadow warmongering has been the disaster unfolding today. Syria now is a failed state. According to the United Nations, nearly 250,000 people have been killed, and 10.6 million people—almost half the country’s pre-war population—have been forced to flee their homes. And, thanks to unending posturing of the big powers, the diplomatic horizon has been so diminished that the only solution the great powers have been able to agree upon so far has been the need to defeat ISIS.

Instead of supporting the revolution when it was a largely unarmed affair, the globe’s power players turned Syria into a geopolitical chessboard.

This was woefully evident at as an August 17 United Nations Security Council meeting, when the veto-wielding powers were able to find consensus only by emphasizing the ISIS fight, leaving the far more crucial question of the future of the Assad regime and the Syrian state off the table. More recently, Russia’s military involvement in Syria has reinforced the impetus towards a common strategy between the United States and Putin. Despite their longstanding differences, they may yet find common ground in their mutual goal to preempt an Islamist victory. The question is, will a possible alliance lead them only toward an intensified military campaign against ISIS, or will it lead to a meaningful conversation about political solutions to the larger crisis?

ISIS is decidedly frightening, a cult of ultra-violence bent on radical destruction; but it is also a symptom of a larger disease: tyrannical regimes. Therefore, an international effort that focuses solely on defeating ISIS, without resolving the fractures that brought the country to civil war in the first place, will not solve Syria’s problems. As long as Assad continues his offensive, there will be no unity among rebel groups and government forces in fighting ISIS. And as long as Assad remains the absolute center of political power, determined to hold on at all costs, ISIS will continue to thrive, because the ISIS challenge is, as much as anything, a byproduct of the regime’s survival strategy. Terror and tyrant exist in symbiosis; they feed on each other to survive and thrive.

To understand how, it’s necessary to time-warp back through the four, escalating years of the Syrian crisis. As street protests ramped up during the spring of 2011, the Assad regime countered with armor and air power, bombarding pro-opposition towns. When opposition responded by taking up arms, the regime claimed vindication; it preferred to fight a civil war on sectarian lines than to respond to a secular democratic protest movement, repeatedly bombing and shelling every major city, even the suburbs of Damascus.

Assad, like all Arab dictators, has relied on Western fears of terrorism to persuade them that’s he’s all that stands between Syria and a complete extremist takeover. From the beginning of the rebellion, he sought to brand his opponents as “terrorists,” and the rise of ISIS—out of the vacuum created by the sectarian failure of the Iraqi state to integrate its Sunni population—became exhibit A in Assad’s case for why the West should support his staying in power.

But Assad had deliberately helped fuel the Iraqi insurgency that birthed what became ISIS. US officials confronted him in 2003 over his regime’s systematically enabling jihadist elements to cross the border to fight the Americans and their allies in Baghdad. The accusation that Assad was facilitating terrorism was based on the fact that his regime had released jihadist militants from Sednaya prison in 2003.

Still, the double-dealing continued: in late 2013, the Assad regime released Mohammed Haydar Zammar, a 9/11 recruiter who immediately became an ISIS commander. A number of other jihadist commanders have been freed since 2011 from Sednaya. They include Zahran Alloush, the current leader of Jaysh al-Islam and Hassan Abboud, founder of Ahrar al-Sham and Abu Malik al-Talli, top commander of Al Nusra front, and Abu Al Shari, later an ISIS judge. So, while Assad’s forces were arresting pro-democracy secular activists, they were releasing jihadists—knowing that cultivating what became ISIS would eclipse the democratic Syrian rebellion and position the regime as the only viable alternative in the eyes of Western powers.

Those same Western powers had turned on Assad more than a decade ago, not only because of his enabling of Al Qaeda in Iraq, but because he reportedly ordered the assassination by Hezbollah of the former prime minster of Lebanon Rafik Hariri, who had wanted Syria out of Lebanon. Even though the resulting protests and international pressure forced a formal Syrian withdrawal from Lebanon, wishful thinking prompted Western leaders to try to rehabilitate Assad, turning a blind eye to his repressive and mafia-style business practices, on which his regime is based. Congresswoman Nancy Pelosi, in her role as House Speaker, visited Assad in Damascus in 2007; the following year, then–French President Nicolas Sarkozy visited as well.

Assad’s response to the 2011 uprising finally turned most Western leaders against him—yet, despite the monstrous repression he unleashed on his own people, fear of what might follow his ouster has allowed Assad to get away with murder over and over again. Now, with ISIS hovering only seven kilometers from the center of Damascus in the Palestinian refugee camp of Yarmouk, Assad is now enjoying the most pyrrhic of victories.

While solutions are challenging to come by, there are viable political models, most notably the 2012 Geneva Communiqué.

While solutions are challenging to come by—and the world’s powers seem increasingly committed to military responses—there are viable political models, most notably the 2012 Geneva Communiqué, which provided a roadmap for ending the civil war by relying on a Syrian-led transitional process and the formation of a democratic, pluralistic state. Under the communiqué’s guidelines, groups not on the terrorism list can participate in a government coalition, while the security forces and army would remain intact, preventing the sort of catastrophe that ensued when the US occupation regime abruptly disbanded the Iraqi army. The Geneva Communiqué also promises to protect the Alawite minority in an inclusive government, releasing the Alawites from their perceived obligation to fight ruthlessly for the regime’s survival.

As UN Special Envoy for Syria Staffan de Mistura stated, perhaps the best hope is to pressure international players to implement the Geneva Communiqué, as this would represent the only authentic effort to find a solution in years. But as long as the world’s powers continue to search for solutions to Syria that do not set forth an inclusive political system, ignore human rights, and lack fair distribution of wealth and power, the refugees will continue to flow, and extremism will continue to thrive. And, Aylan Kurdi will have become just another statistic in an ongoing man-made catastrophe.