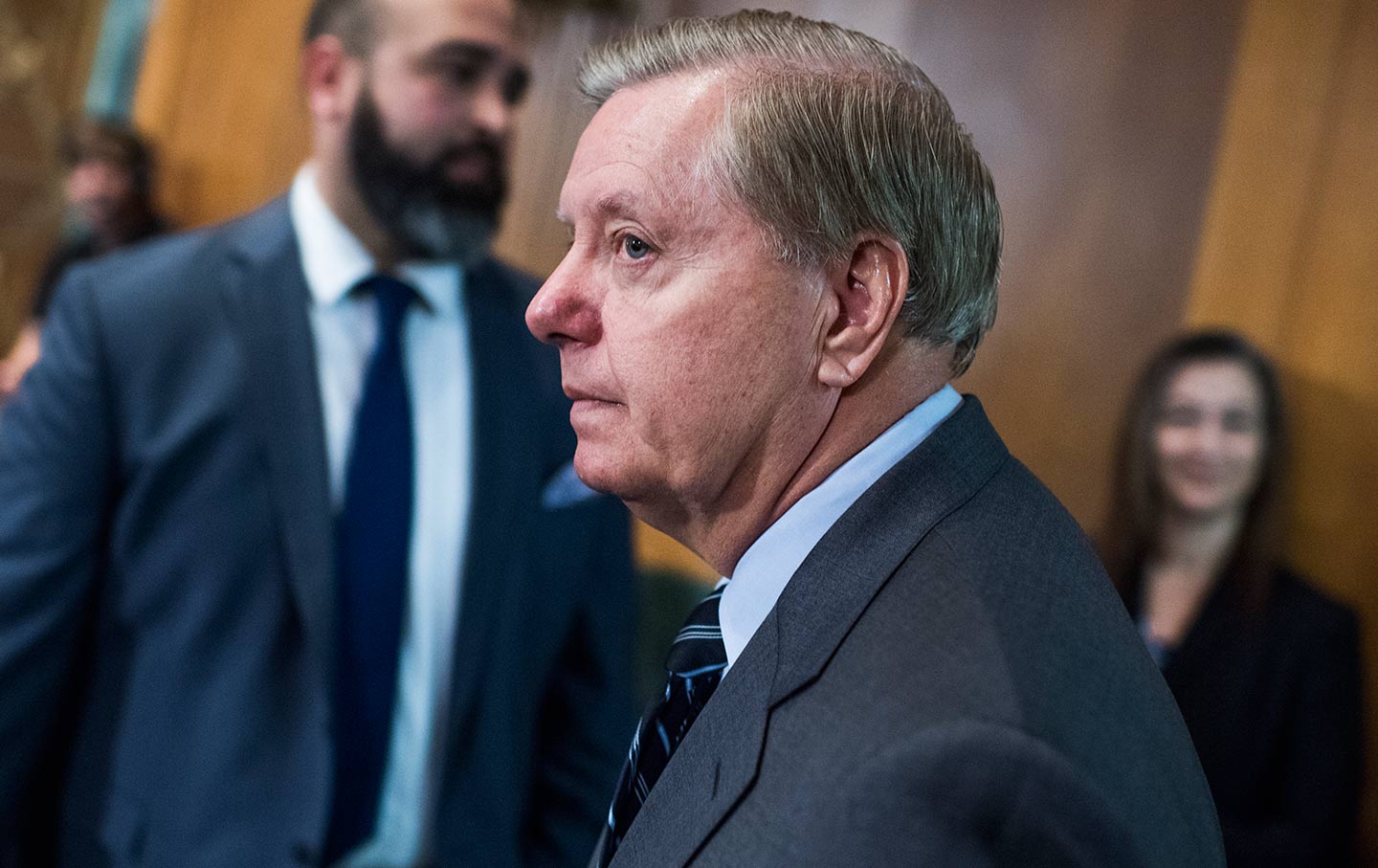 The degradation of Senator Lindsey Graham should no longer surprise us. Once the president’s implacable foe, now he’s his strongest ally. Once perceived as a Republican maverick alongside the late Senator John McCain, Donald Trump has turned him into a lackey.

Still, we ought to reserve some surprise for occasions like Monday, when the head of the Senate Judiciary Committee, himself a lawyer, told a private citizen to defy a Republican senator and to break the law. And that’s what Graham did when he advised Donald Trump Jr. to ignore a subpoena from the Senate Intelligence Committee, run by his Republican colleague Richard Burr. We should pause to be horrified. For the record, in the past Graham claimed that both Richard Nixon and Bill Clinton could be impeached for defying subpoenas. But that was in the b.t. era: before trump.

Burr is not any kind of GOP moderate: He is solidly conservative. He has tried to work with the White House; Robert Mueller’s investigation found that he unwisely if not unethically shared information about the probe with Trump administration officials. He and the ranking Democratic member, Senator Mark Warner, have clashed more than once about how to conduct their probe, and how much to say to exonerate or reassure the president. Yet they have patched up their differences and conducted what most observers believe to be a sober and fair bipartisan investigation.

If Burr wants Trump Jr. to return to his committee, he has a legitimate reason for doing so. Reportedly, he wants to question him about the June 2016 Trump Tower meeting, along with inconsistencies in Trump campaign statements about the Trump Moscow project; specifically, the claim that all talk of the project ended by January 2016 as the Republican primary season began, when there is now evidence that conversations continued up until the July GOP convention, where Trump received the presidential nomination. It would matter that the man who very quickly emerged as the front-runner continued to negotiate with Russian oligarchs and officials to receive a sweet Moscow deal. It is also possible that Trump Jr. perjured himself in earlier Senate testimony.

At any rate, Burr has questions, and observers in both parties say they’re not likely to be frivolous. It should be underscored: He heads the Senate Intelligence Committee, so his concerns likely have to do with issues of national security; Lindsey Graham doesn’t even sit on that committee. Burr is one of the so-called “Gang of Eight,” the eight congressional leaders empowered to learn about the most sensitive details of threats to the US and intelligence operations; Graham is not.

To its credit, most of the mainstream media acted appropriately shocked by Graham’s wanton advocacy of lawbreaking. But one level of the prevailing analysis disturbs me. Many are shocked not just because Graham is advising Trump Jr. to defy a congressional subpoena and thwart its constitutional oversight function, but because he’s defying one from a conservative Republican. I do admit that makes it more brazen, but it’s honestly no more scandalous than those Republicans who endorse the White House defying subpoenas from Democratic House committee chairs Jerrold Nadler, Richard Neal, Adam Schiff, or Maxine Waters.

We have a constitutional crisis on our hands, and it’s less Trump defying Congress—he is a lawless president, but there are constitutional remedies for that. The constitutional crisis is that congressional Republicans are abdicating their oversight responsibilities to protect a lawless president because they fear he’ll come after them. The media must be as disturbed by the hundred-plus congressional subpoenas the Trump administration is ignoring, not just the one for Trump Jr.

Maybe the worst thing to happen Monday, in terms of the rule of law, was Attorney General William Barr’s decision to open an investigation into the origins of the investigation into Russian interference with the 2016 election. Trump is also trying to get information and possible assistance from the new Ukrainian government in investigating allegations against Hunter Biden as well as his father, former vice president Joe Biden, who is currently the Democratic presidential front-runner. Using your Justice Department and your foreign-policy apparatus to investigate and perhaps punish your political enemies is straight from the authoritarian playbook. (Oh, coincidentally, also on Monday Trump met with Hungarian autocrat and immigrant-hater Viktor Orban, and praised him.) Again, almost no Republicans, and not enough media professionals, seem to care.

That made Monday a particularly bad day for those who care about the rule of law. There is something about Richard Burr that is indeed different that we must acknowledge, however: He is not running for reelection. He doesn’t have to worry that Trump’s allies will recruit a primary challenger from North Carolina’s conservative fever swamps, or that he’ll turn his Twitter feed against him, and thus the party’s right-wing base. Trump can’t hurt Burr, and thus Burr’s “courage” tells us less about his righteousness, or the validity of his subpoena to Trump Jr., than about his party’s spineless swerve to the right, and its fealty to Trump over country.