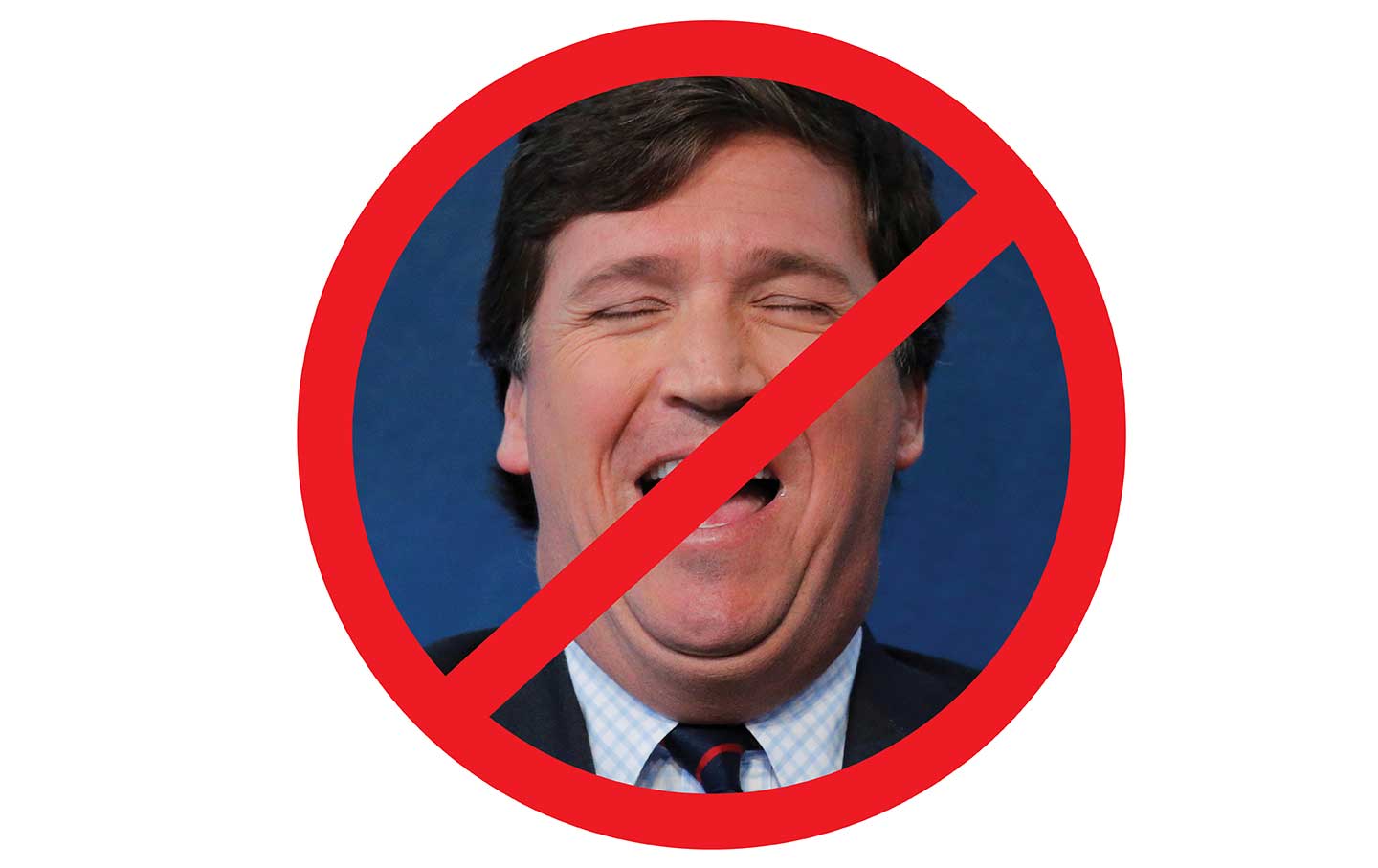 On Tuesday night, the perpetually smirking Tucker Carlson used his nightly Fox News show to denigrate congresswoman Ilhan Omar as an ungrateful immigrant. “Ilhan Omar is living proof that the way we practice immigration has become dangerous to this country,” Carlson said of the Somalia-born legislator. “A system designed to strengthen America is instead undermining it.”

There’s nothing new about racism from either Fox News or Carlson’s mouth, but the virulence of this attack reopened a debate about whether progressives, either leftists or liberals, should appear on the right-wing network. This is a particularly pressing issue because Carlson has made it a habit to invite leftists on his show when he thinks he can find common ground with them. Glenn Greenwald of The Intercept and independent journalist Michael Tracey have been recurring guests, much cherished by Carlson for their critique of the Russiagate story. Last November, Irish academic Angela Nagle, a leftist, stirred anger when she went on Carlson’s show to decry the left’s embrace of open borders.

In response to the Omar smear, author Molly Crabapple tweeted, “Self identified leftists, stop going on Tucker’s White Power Hour to agree with him.”

On a broader political stage, the status of Fox has divided the Democratic presidential hopefuls. In April, Bernie Sanders did a much-discussed town hall on Fox News. The next month Pete Buttigieg followed in Sanders’s footsteps, while Elizabeth Warren adamantly rejected a Fox invitation.

“Fox News is a hate-for-profit racket that gives a megaphone to racists and conspiracists,” Warren argued. “Hate-for-profit works only if there’s profit, so Fox News balances a mix of bigotry, racism, and outright lies with enough legit journalism to make the claim to advertisers that it’s a reputable news outlet.” Warren framed her rejection of Fox News as part of a broader boycott designed to marginalize the network.

The Fox News problem is, in fact, a set of overlapping questions: Should Democratic politicians go on Fox News, should progressive activists and writers go on Fox, and are certain programs (such as Carlson’s show) worse than others?

In my view, Sanders and Buttigieg made the right move, while Warren’s stance, however principled, makes little sense. After all, politics inevitably involves convincing those outside the fold: Winning over unbelievers is as important as keeping the choir humming. Sanders’s Fox News appearance, where he got an audience picked out by the network to applaud higher taxes for the rich, was a triumph. It was a model for how the left should do outreach.

For writers and activists, the question is trickier, since they aren’t trying to win votes but to more subtly influence the zeitgeist. In that enterprise, there’s a delicate balance to strike between getting the message out while also making sure that bigotry isn’t normalized.

To grapple with this dilemma, I talked to three young left-wing writers who have appeared on Fox.

“Fox has a really big audience, so I think it’s generally worthwhile to try to talk to them, supposing there are a few preconditions,” says Elizabeth Bruenig, a Washington Post opinion writer. Those preconditions include “not being used to make a point or manipulated to support a position you actually oppose.”

But the question of manipulation becomes more complex when dealing with a crafty figure like Tucker Carlson. As a Trumpist right-winger, arguably more true to the ideology than Trump himself, Carlson’s project includes trying to attract traditional Democratic voters into the GOP fold. Carlson is as insidious as he is odious and therefore very cunning in trying to channel popular anti-war sentiment into a right-wing unilateralism, as well as recasting grassroots anti-business sentiments into a conservative opposition to the supposed cosmopolitan elitism of woke capitalists. This explains Carlson’s penchant for having on leftists like Greenwald and Tracey: Carlson is trying to co-opt aspects of their anti-establishment message for his own project.

For some leftists, the imperative of getting out their message overrides the dangers of co-option. “There’s a spectrum of Fox-appearing,” contends Katie Halper, writer and host of The Katie Halper Show. “On one end is going on a show to disagree with a host or the channel. Most, though not all, of the people who criticize appearing on Fox are OK with that. On the other end of the spectrum is going on a show to agree with someone in a way that lends itself to bigotry. Angela Nagle appearing on Tucker Carlson to criticize open borders is an example of this. Between those two ends of the spectrum is going on to agree with the host about war. Calling out the hawkishness of Trump or the Democrats for that matter, arguing that we shouldn’t intervene in Venezuela or Syria, is a good thing, full stop. Anything anyone can do to spread an anti-war message is a good thing.” Halper adds that Fox News is all the more important for the anti-war left because CNN and MSNBC are reluctant to air their views.

Michael Tracey notes that on Fox he’s “been able to criticize the CIA, FBI, US foreign policy, Donald Trump, and even Fox News itself during segments on the network.” Tracey went on to heap scorn on the “band of Internet hall monitors” who “want to pull a sleazy guilt-by-association trick, where talking to a television host for three-and-half minutes is somehow construed as tantamount to endorsing everything that host has ever done.”

It is true that Carlson does allow Tracey some room to go after Fox. On the March 22, 2019, show, Tracey said, “This past week we marked the anniversary of the Iraq invasion, and since then all the top media promoters of that invasion have ascended to high levels of power and influence. I could name a couple, many of whom frankly appear on this network on occasion.” This criticism lumps in Fox News with the rest of the media rather than castigating the network as having specific problems.

Earlier that month, prior to Tracey’s appearance on the show, a tape surfaced of Carlson in 2006 appearing on The Bubba the Love Sponge Show, where Carlson described Iraqi citizens as “semiliterate primitive monkeys” who “don’t use toilet paper or forks.” In response, Tracy tweeted: “The comments from Tucker degrading Iraqis (however long ago it might’ve been, and even if they were meant to amuse Bubba the Love Sponge) are indeed odious. Outrage mobs are not conducive to fruitful conversation, but that doesn’t detract from the odiousness of the comments.”

It’s hard not to see Tracey’s criticism as being highly extenuating and perhaps even compromised. Carlson’s racist statement is described as something that occurred in the distant past and perhaps was only uttered to please a comically named shock jock. And Tracey for some reason felt compelled to excoriate Carlson’s anti-racist critics (the supposed “outrage mob”).

He who sups with the Devil, the old saying goes, should have a long spoon. But there is no spoon long enough to allow you to safely dine with Tucker Carlson. Fox News requires a nuanced response: Politicians like Sanders should be free to use it as a forum for winning converts. Activists and writers should do the same with most shows. But the worst of Fox, certainly Tucker Carlson and perhaps also Laura Ingraham, deserves to be isolated and ostracized.