If Donald Trump’s rise to the White House has proven anything, it’s that fear of immigrants is one of the dominant forces inside the Republican Party (fear of dark-skinned immigrants, to be more precise; Norwegians are apparently perfectly acceptable). This racism is what is driving GOP intransigence around the Dream Act, which an overwhelming majority of Americans support, leading to the January government shutdown—and possible another one in February.

But there’s a lesson here for Democrats. The thing that your enemy is most afraid of—it’s probably a good idea to harness and unleash its power if you want to win.

The truth is that Republican are right to be afraid of immigrants. Not because there might be a taco truck on every corner (and, really, would that be so bad?), but rather because the rapidly expanding ranks of Latinos have the potential to decimate the political power of white supremacists and their enablers in Congress and the White House. Latinos are now the largest nonwhite racial group in America. They are among the fastest-growing sectors of the population (Asian Americans are actually the fastest-growing segment of the population). There are 58 million Latinos in the country, and many of them are young citizens, with 66,000 Latinos turning 18 (voting age) every month.

This group is more than large enough to transform the political balance of power in key states and in the country as a whole. Most immediately, Latinos now have the numbers to swing key races that will determine control of the United States Senate. The strategic question for progressives is will they channel the resources of the resistance into building the power of the very people who have conservatives quaking in their boots.

Democrats need to pick up two Republican-held Senate seats to flip control of the chamber, while also protecting all 26 of the seats held by Democratic incumbents or independents who caucus with Democrats. This latter challenge is more manageable than many realize. While it’s true that Trump won 10 of the states that Democrats are defending, he did so by defeating Hillary Clinton, not incumbent native sons and daughters. More importantly, the outcomes of midterm elections hinge on voter turnout. Whichever party gets more of its core supporters to the polls in the non-presidential election year usually wins, and in most of the seats that Democrats are defending, more people voted for Hillary Clinton than voted for the last Republican nominee for Senate.

In terms of taking territory from Republicans, the most winnable seats are in Arizona and Nevada, two states with large Latino populations (stemming from the fact that the land on which those states sit used to be part of Mexico, until the United States killed thousands of Mexicans and stole the land in the War of 1848). Hillary Clinton won Nevada in 2016. Arizona was one of the closer contests in the country, with Clinton losing by just 3.5 percent—a margin of 91,000 votes in a state where 600,000 eligible Latinos did not cast ballots in 2016.

Hot on the heels of those two promising pick-up states is Texas—yes, Texas!—where Latinos have more than enough numbers to toss Ted Cruz from office. Despite his Latino heritage (Cruz is a Cuban American in a state whose Latinos are overwhelmingly Mexican American), Cruz has consistently worked against the interests of the Latino community in his quest to become a darling of a Republican Party that is solidly rooted in white supremacy. Trump won Texas by slightly more than 800,000 votes, but there are nearly 3 million Latinos who didn’t vote in 2016.

The table below illustrates the size and potential power of the nonvoting Latino population vis-à-vis the electoral margin of difference in the 2016 presidential election in these three states. 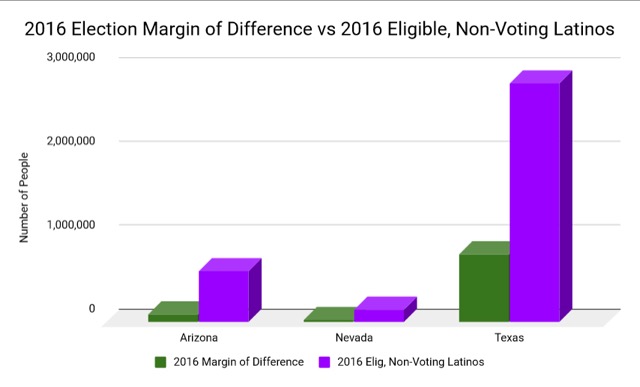 Clearly, increasing Latino voter turnout is key to winning back control of the United States Senate—the very body that is aiding and abetting the forced deportation of Latino people. Twenty eighteen can be the year when immigrants of color strike back.

Such success won’t just happen on its own, however. In order for reinforcements to come to the rescue, they need a vehicle to get to the battlefield. If Democrats and progressives want to seize the moment, they must make massive monetary investments in the organizations, leaders, and candidates who can inspire and organize historic Latino voter turnout. That is how to turn political potential into political power—and how to transform demographic trends into a new political order based on justice, equality, and inclusion.

Based on past midterm-election voting patterns, the gap Democrats must bridge in Arizona and Nevada will be about 300,000 people. Research and prior experience have proven that it costs about $75 to successfully help an infrequent voter overcome the financial, logistical, and motivational obstacles that keep her or him from casting a ballot. Therefore, an intelligent investment of about $23 million in Arizona and Nevada is key to taking back the Senate. (It will likely cost an additional $50 million to win Texas.) These are significant sums of money, but remember that Democrats spent $200 million on the Senate in the last midterm elections.

In order to win in 2018, progressives must make investments in the nitty-gritty work required to increase voter turnout. That means elevating and embracing Latino candidates and pouring buckets of money and support into community-based organizations with strong reputations and deep roots.

It also means overhauling and redirecting the progressive communications machine. How many people in the progressive movement have heard of David Garcia? His campaign for governor of Arizona can be the engine that pulls along all the Democrats in the state—including the Democratic nominee for Senate—to victory.

Equally important, how many know about One Arizona, a statewide coalition that registered 150,000 Latino voters in six weeks in 2016? Or what about Mi Familia Vota in Nevada? And how many progressives are aware of the Texas Organizing Project, the highly disciplined and effective community-based organization that drove the efforts to elect the mayors of Houston and San Antonio (by, in many cases, literally driving voters of color to the polls)?

These are the groups and leaders on whom many millions of dollars should be showered if we want to recapture control of Congress and take back our country. In so doing, we will seize upon the force most feared by the Republicans and unleash its energy to propel radical political changes that will foster the dawning of a new day of justice and equality for all.

How Gayness Changed During My Lifetime