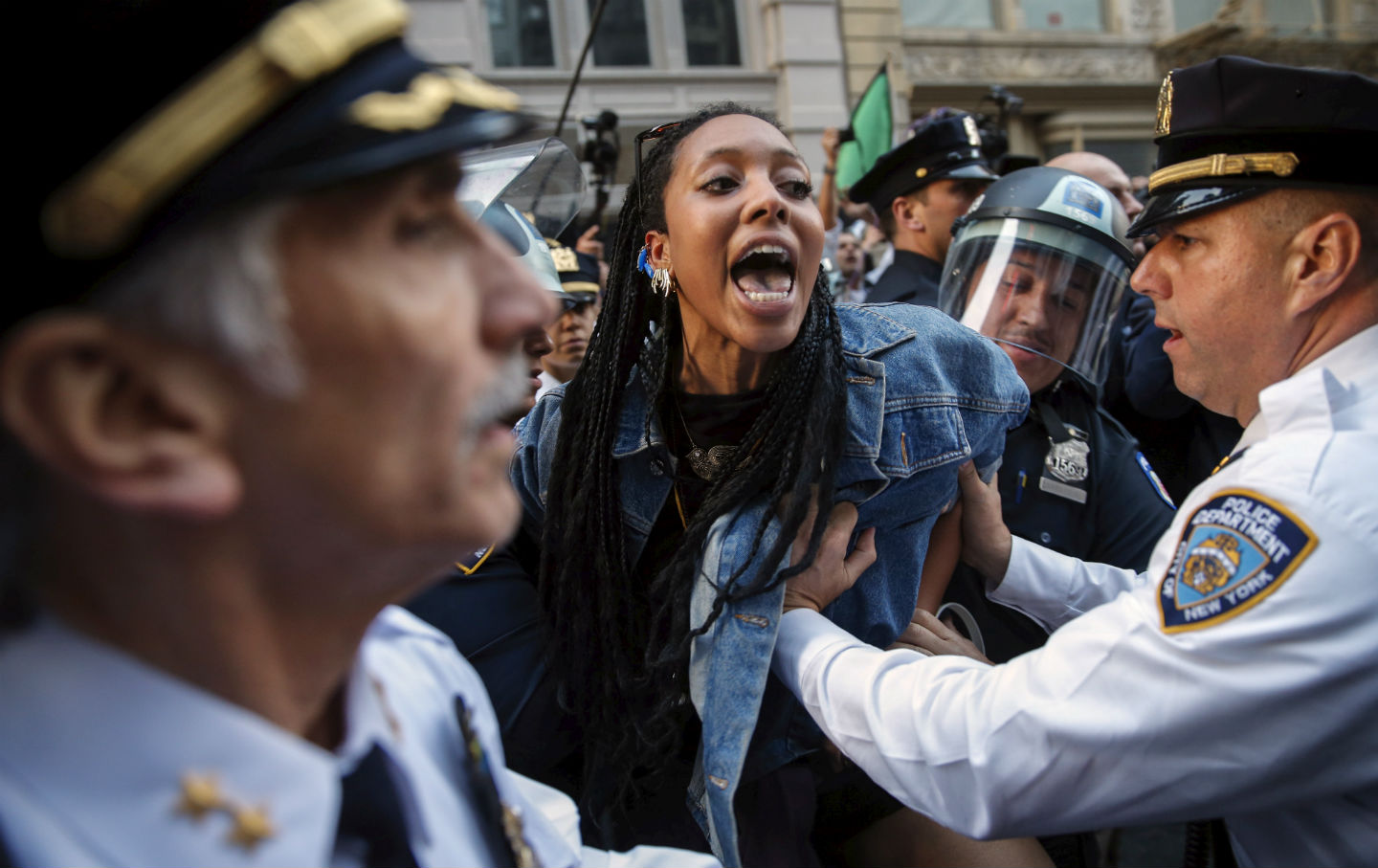 NYPD officers detain a protester during a march through Manhattan billed as "NYC Rise Up & Shut it Down With Baltimore." (Reuters/Mike Segar)

Given the NYPD’s pervasive lack of transparency, there will probably never be a public accounting of why they so dramatically shifted gears last night in deciding to aggressively corral, arrest, and terrorize demonstrators marching in solidarity with the protests in Baltimore.

Last night’s emergency march was organized by the Millions March and other groups to respond both to the death of Freddie Gray at the hands of police and the aggressive and demeaning response of Baltimore’s political and police leaders. The crowd of several thousand was racially diverse and included families with small children and the elderly. Given the police handling of previous protests on this issue the crowd assumed that a march would be allowed despite the threatening tone set by the NYPD through leaflets and announcements ordering people to stay off the streets.

According to National Lawyer Guild member Gideon Oliver, quoted in Gothamist, the police were well aware that people intended to march in the street regardless of police threats and that the police were given every opportunity to arrange a march restricted to one lane of 6th Ave. The police adamantly refused, setting the stage for a major and totally unnecessary and avoidable confrontation.

As demonstrators moved out of Union Square and into the street, they were immediately confronted by hundreds of police who pushed and shoved them, knocked people down and arrested dozens. Families with children were terrified and attempted to flee the scene. Dante Barry of Million Hoodies tweeted: “I watched 10 year old scream for his life last night in fear that the NYPD would kill him while protesting. Never forgetting that moment.” Journalist Rashad Drakeford reported, “They were pushing kids and knocking women in the head with nightsticks. One mother came over to us with her young son asking for protection because the cops were literally pushing and knocking down kids in the crowd. Her son couldn’t have been over 13 years old and was in tears and I mean bawling, uncontrollable tears. He just stood behind his mother as she tried to console him.” Russell Simmons’s political director Michael Skolnik was clearly shaken by the police response, tweeting: “I’ve protested my whole life in NYC. Anti-war, immigration, climate, anti-police brutality marches… Never seen anything like I saw tonight. The @NYPDnews was completely different force tonight than during all of the marches in December and January. They came out swinging…”

In their attempt to contain the march, the NYPD’s aggressive actions served to splinter the crowd, sending several marches off in different directions, some with police escort and some without. At different times groups of marchers blocked the Holland Tunnel entrance on Canal St, occupied the West Side Highway, and took over Times Square more than once. Throughout the night police acted aggressively against anyone who strayed into the street, making numerous arrests that often involved pushing and shoving crowds and tackling demonstrators being arrested. In all over 100 people were arrested.

In response the Justice League, which has close ties to the de Blasio administration, issued the following statement:

Last night, Mayor de Blasio’s NYPD egregiously demonstrated its complete disregard for basic human and civil rights. Justice League NYC joined thousands of nonviolent demonstrators at a rally to stand in solidarity with the Baltimore community because we as New Yorkers know exactly what it’s like to receive zero accountability from our Mayor and police department when an unarmed person is killed by police.

Mayor de Blasio & Commissioner Bratton we want you to know that “community relations & building trust” does NOT include: brandishing your billy clubs at nonviolent marchers on side walks; arbitrary arrests; and aggressively terrorizing families who were simply teaching their children how to exercise their constitutional right of free speech. Last night what we saw was the manifestation of the Strategic Response Group that Commissioner Bratton spoke of where he equated protestors with terrorists earlier this year.

Mayor de Blasio, why did you determine that your NYPD would respond this way against your constituents? Is this the New York City you promised you’d build? We demand an immediate response. We demand leadership. We demand justice.

Last night’s policing stands in stark contrast to the handling of earlier police accountability protests. Following the grand jury decisions in Ferguson and Staten Island, the NYPD decided to take a largely tolerant and accommodating stance towards protests. People were allowed to march in the streets and even on highways and bridges, causing significant traffic tie-ups, but remaining essentially peaceful. One notable exception being a confrontation on the Brooklyn Bridge in which isolated officers attempted to take enforcement action against a group of demonstrators throwing things onto the roadway without back up and were assaulted. This was dramatically different than the militarized police response seen in Ferguson and served to lower tension in New York.

That more tolerant approach was not totally new. Ever since de Blasio took office the NYPD appeared to be dialing back its more aggressive protest policing tactics. At the Climate March in September, police allowed more freedom of movement and did not attempt to pen in the entire event as they have in the past. Even more telling was the handling of the Flood Wall Street action the next morning in which police allowed several hundred demonstrators to occupy lower Broadway almost the entire day.

This was a huge departure from the aggressive micromanagement of the Occupy Wall Street Protests in which police routinely used force and made arrests of non-violent demonstrators for attempting to march in the street, use chalk on the sidewalk or speak into a megaphone. That zero tolerance approach had been in use since the Giuliani administration and represents the application of “broken windows” based policing to the handling of protests. It is intolerant of disorder, obsessed with micromanaging public behavior, and fearful that any loosening of control will result in the downfall of Western civilization. The NYCLU documented these practices in a series of reports in 2003 and 2005.

We can only speculate on why the NYPD decided to return to this aggressive form of “command and control” policing. We do know that they are very concerned about the potential for rioting. When rioting broke out in England in August of 2011, it sent shockwaves through the NYPD. Top brass organized a series of tabletop exercises involving its Disorder Control Unit and developed new deployment plans. The tension could be seen in the early involvement of high-ranking officers in monitoring and policing the Occupy Wall Street demonstrations. Chief of Department Phillip Esposito was a regular presence at Zuccotti Park, something that is totally uncharacteristic for someone in his position. It is possible that witnessing the events in Baltimore produced similar concerns, causing them to adopt a more hardened approach to demonstrations in hopes of keeping them under control.

It is also possible that the mayor and police received significant grief behind the scenes from people inconvenienced by last year’s disruptive protests and wanted to avoid a return to bridge and highway occupations, a tactic that was used nationally to great effect. It may also indicate a shift in power as the NYPD exerts more independence from the mayor in asserting authority over how demonstrations are handled. We know that many officers were not happy about the permissive approach taken in previous demonstrations and police union leaders linked those protests to the killing of two officers in Brooklyn in December by a mentally ill man who had just killed his girlfriend in Baltimore.

Whatever the reasons, last night’s police actions have shaken the conscience of police reform activists in New York and significantly undermined the efforts of the mayor and Commissioner Bratton to rebuild relationships and restore public trust in them, and in the process they have probably hardened critical attitudes about policing in New York.