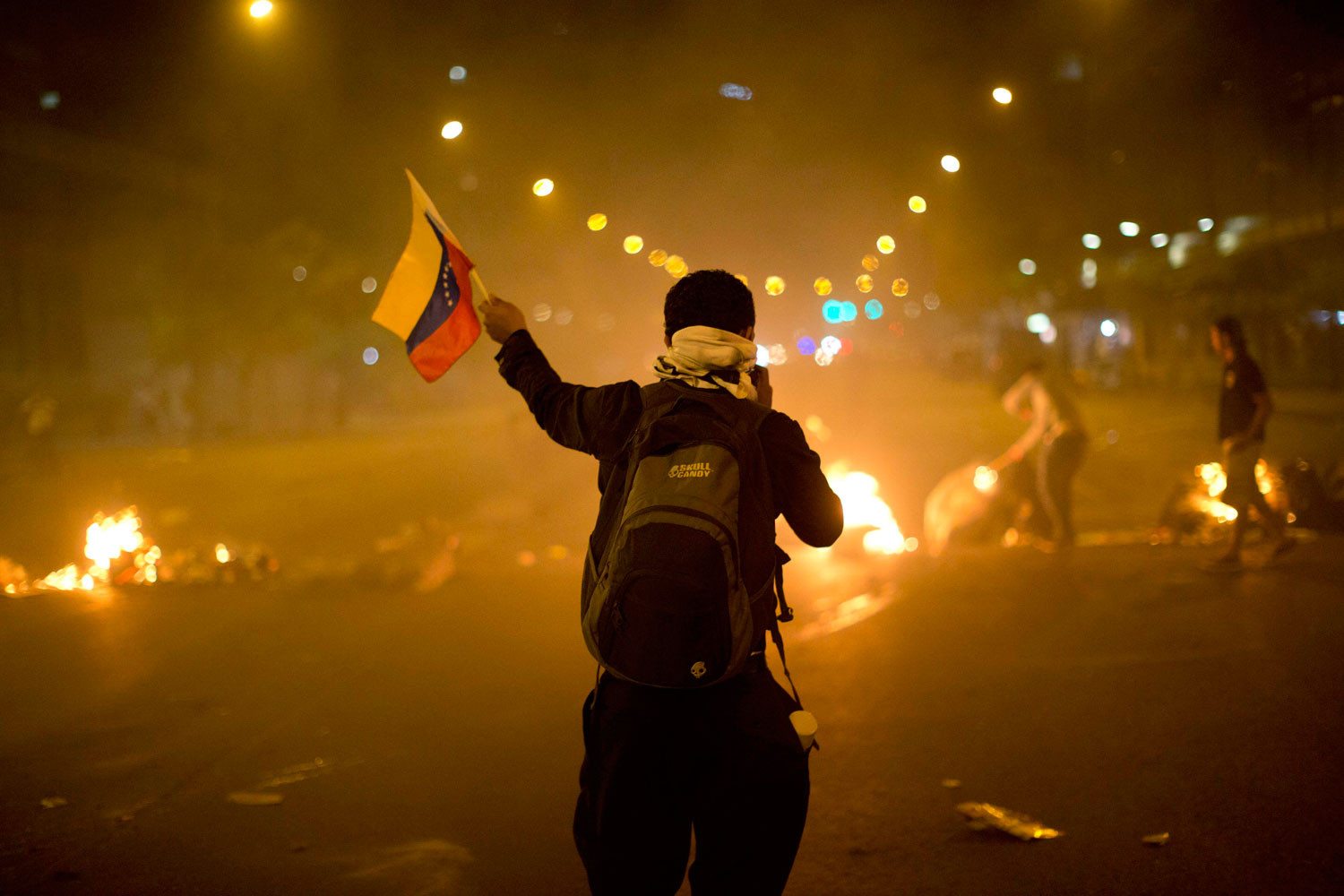 An anti-government demonstrator in the Altamira neighborhood of Caracas, Venezuela. (AP Photo/Rodrigo Abd)

Ours is an age of riots and rebellions, of radical self-creation in the heady streets: Spain’s indignados, the Occupy movement and, of course, the Arab Spring. We are understandably excited by crowds in the streets, and our pulse may even rise at the sight of broken glass and flames, because for so long such images have represented the shards of the old world through which we can catch the perceptible glint of the new. The protests in Venezuela might therefore seem to be simply the latest act in an upsurge of world-historic proportions.

Despite hashtags like #SOSVenezuela and Jared Leto’s remarks at the Oscars, these protests have more to do with returning economic and political elites to power than with their downfall.

Venezuela’s “Bolivarian Revolution” leapt forth from the collision of radical social movements against a repressive neoliberal state. Fifteen years ago, Hugo Chávez was elected amid the collapsing rubble of the old two-party system, but the “revolution” over which he would preside has far deeper roots. For decades, guerrillas, peasants and workers, women, students and the urban poor struggled against a system that, while formally democratic, was far from it in practice. These revolutionary grassroots movements, which I document in We Created Chávez, blew a hole in what Walter Benjamin called the continuum of history in a massive anti-neoliberal riot that began on February 27, 1989.

This event—henceforth known as the Caracazo— irreversibly divided Venezuelan history into a before and an after. Numbers often fail us in their false equivalence, but there is much that they make clear: some 3,000 were killed in 1989, many deposited unceremoniously in unmarked mass graves. It was into this gaping wound in history that Chávez stepped with a failed coup in February 1992. The revolution predated Chávez, and it was always about more than the individual; so too for Nicolás Maduro today, as these movements continue to struggle alongside and occasionally in tension with the government.

The recent wave of protests in Venezuela—whose hashtag, #LaSalida, calls for Maduro’s “exit” from power—has nothing to do with the arduous struggles of these movements to build a new society. While the protests are ostensibly about economic scarcity and insecurity—very real concerns—behind the scenes they reflect the weakness of the Venezuelan opposition, not its strength. The opposition’s fleeting unity splintered after defeat in December’s local elections, and, impatient with the electoral game, more-hard-line voices—notably Leopoldo López—outflanked Henrique Capriles to the right.

Rather than a breath of fresh air, López is all too familiar, not only for his political intransigence but also because, like Capriles (who lost last year’s presidential race to Maduro), he represents the very thinnest sliver of Venezuela’s upper crust, a sector that has rarely attempted to connect with the poor majority. The very picture of privilege—in a country where Chávez was unacceptably dark-skinned for some—López was trained in the United States from prep school to Harvard’s Kennedy School, an elite scion if ever there was one.

The political party in which both López and Capriles cut their teeth, Primero Justicia, emerged at the intersection of corruption and foreign intervention: López was later barred from public office for allegedly receiving state oil funds from his mother, and FOIA documents reveal that the party received significant funding from US government ancillaries like the National Endowment for Democracy, USAID and the International Republican Institute. López does not flinch at taking the extra-institutional route: during the 2002 coup—of which he has said he is “proud”—he led violent witch hunts to arrest Chavista ministers.

With a clever bit of theatrics, López has placed himself at the forefront of these demonstrations, but where are the protests headed? From the beginning, the numbers have not been particularly impressive by Venezuelan standards. But more problematic for the opposition is the composition and very predictable geography of the protests, largely confined as they are to the wealthiest neighborhoods.

Even the ferociously anti-Chavista blogger Francisco Toro of Caracas Chronicles has argued, “Middle class protests in middle class areas on middle class themes by middle class people are not a challenge to the chavista power system,” and Capriles himself has similarly insisted that the opposition must work to attract the “humble people, the people of the barrios.” In other words, even many Maduro opponents recognize that this “exit” hashtagged from BlackBerries is nothing of the sort, but instead a callejón sin salida, a dead end.

Despite the clear need to reach out to Venezuela’s poor majority (and opportunities to do so), class hatred remains the rule of the day, with the wealthy opposition smearing radical Chavistas with the fearful epithet colectivos. While the wealthy paint these groups as both blindly loyal and dangerously autonomous from the state—seemingly oblivious to the contradiction—the radical Chavistas are really among the most independent sectors of the revolution. Quick to denounce government missteps and corruption, these forever victims of the state’s repressive violence demand above all that the revolution move forward faster.

Hyperbole seems to dominate on both sides. Many loose threads remain, but few are easily disentangled from this broad back-and-forth of revolution and reaction spanning decades. There have been deaths on both sides—some resulting in arrests—but the toll has increasingly fallen on bystanders. Two motorcyclists have even been killed, one decapitated by wire strung at the barricades, apparently for this very purpose. If the experience of 2002 has taught us anything, however, it is to avoid hasty explanations fueled by media imagery. But this caveat does not negate the urgency of the phrase that the revolutionary grassroots reserve for those who once governed them, and who today try to do so again: No volverán— they shall not return.

Venezuela is indeed at a crossroads, having—in the words of the militant intellectual Roland Denis—”llegamos al llegadero, we have arrived at the inevitable.” It is the point at which the Bolivarian process itself—socialism in a capitalist society, direct democracy in a liberal democratic shell—cannot survive without pressing decisively toward one side or the other: more socialist, more democratic, in short, more radical. This is not a crossroads between two forms of government from above, but a question of either deepening the revolution or handing the future back to those who think of nothing but the past.

The only salida is the first, that of the 40,000 communal councils blanketing Venezuela: workers’ councils; popular organizations; Afro and indigenous movements; women’s, gender-diverse and student groups. It is these movements that have struggled to make Venezuela, in the words of Greg Grandin, “the most democratic country in the Western Hemisphere,” and it is these movements that—shoulders to the wheel of history—are the only guarantors of progress.