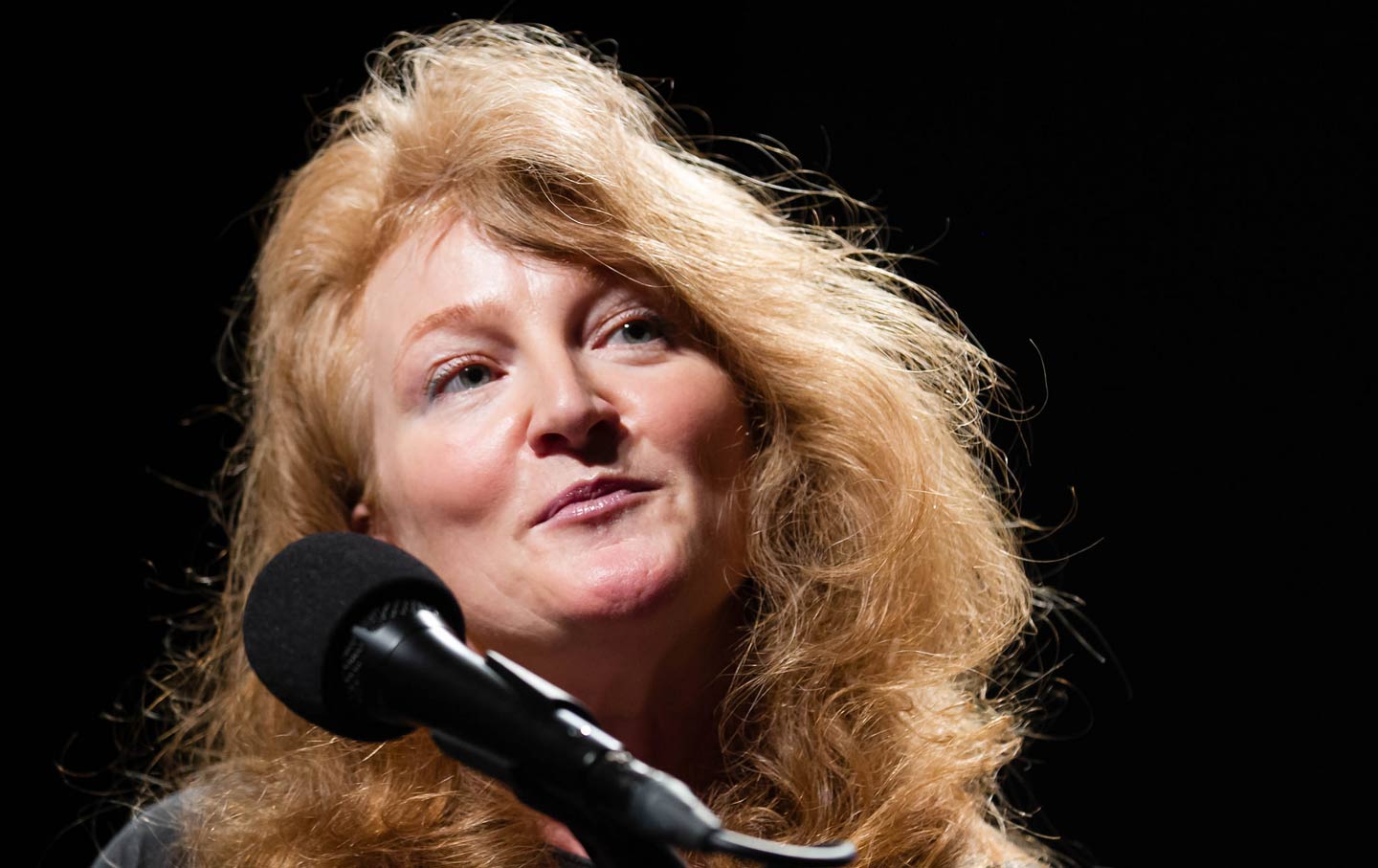 Krista Tippett hosts her radio show On Being live at the PopTech conference in 2014. (PopTech, CC by SA 2.0)

On Being, the NPR radio show about spirituality hosted by Krista Tippett, premiered 13 years ago, but I heard it for the first time only last year, when a professor of social work named Brené Brown was Tippett’s guest. Brown had interviewed more than a thousand people in an attempt to find out why some are plagued by feelings of shame while others aren’t. Their conversation was full of touchy-feely buzzwords—compassion, creativity, authenticity—but it left me feeling unmistakably uplifted. I began listening more regularly to Tippett’s interviews with clergypeople, artists, activists, and scientists about spiritual life in an increasingly secular world. When I felt lonely or dispirited by the news, I would listen to On Being while riding my bike around the park and emerge reassured that the world wasn’t so bad.

Tippett’s show launched, in 2003, with a more overtly religious title: Speaking of Faith. Tippett was raised in the Southern Baptist Church; after working as a journalist and diplomat in divided Germany, she decided to study theology at Yale Divinity School. In 2013, she rebranded the show with a more secular title, On Being, and the episodes went from having titles like “At the Table: The Meaning of Communion” to “How Movie Music Moves Us.” The series went from being a theistic show to an agnostic one. When Tippett won the National Humanities Medal, in 2013, President Obama praised her for “inviting people of all faiths, no faith, and every background to join the conversation.” In a book called Becoming Wise: An Inquiry into the Mystery and Art of Living (Penguin), published this April, Tippett looks back on her conversations and attempts to distill them into a unified theory of agnostic spiritual life.

Agnosticism is often thought of, incorrectly, as a state of theological indecision. Rather, it is the conviction that it is epistemologically impossible to determine whether or not there is a deity. Agnosticism is an ideology of unknowability. In a kindred book, also published this April, Agnostic: A Spirited Manifesto (Riverhead), Lesley Hazleton describes agnosticism as “a recognition that we need room for mystery, for the imagination, for things sensed but not proven, intuited but not defined—room in which to explore and entertain possibilities.” It reflects the beliefs of a growing sector of the population: The Pew Forum on Religion and Public Life found that the number of religiously unaffiliated Americans increased from 15.3 to 19.6 percent between 2007 and 2012. And more than a third of this group identified themselves as “spiritual but not religious.” These people access spiritual life in an enormous range of ways: through yoga, meditation, music, poetry, community service, psychedelic drugs, the outdoors, and more.

On Tippett’s show, talking—connecting through conversation—is a way of accessing spirituality. Much of her work revolves around the collaborative creation of a new spiritual rhetoric. Tippett argues that religious words have become ossified, banal, and politicized. She hopes to develop a new “language of virtue,” made up of what, on one episode, the poet Elizabeth Alexander calls “words that shimmer.” Tippett writes that, in order to keep our spiritual and moral imaginations open, she avoids words that ring partisan: God, prayer, or justice, for instance. When she lists the adjectives that she prefers, they are unmistakably free of denominational connotation: nourishing, edifying, redemptive, and courageous. Tippett also believes that using stories instead of rhetoric can break down the divisions between people. In her book, she writes, “Once I have a sense of your experience, you and I are in relationship, acknowledging the complexity in each other’s position, listening less guardedly.”

With inspiring regularity, “On Being” captures moments when people manage to find meaning together.

Becoming Wise is Tippett’s “cartography of wisdom for the emerging world,” a world which she says is marked by the decline of organized religion and the rise of the Internet. The book is divided into five sections, each dedicated to one of the central theme’s five components—Words, Flesh, Love, Faith, and Hope. The book consists primarily of excerpted interviews from the show, with brief sections of exposition, and a few autobiographical stories. It effectively synthesizes her ideas and seamlessly carries her conversational tone into print. Becoming Wise doesn’t offer anything new, but then, it’s not really meant to.

Another linguistic challenge that Tippett sets forth in her conversations is to resist the either-or proposition. When moderating a conversation about abortion between Frances Kissling, the head of Catholics for Choice, and David Gushee, an evangelical social ethicist, Tippett urges both participants to get “beyond that language—those categories, those too-narrow categories, pro-life, pro-choice.” Instead, she asks them to describe how they arrived at their convictions, to share their thoughts on sex and the sexual revolution, and to say what they admire in the other’s position. The conversation ends up addressing a much larger subject: the ways in which we succeed or fail to take one another’s lives and ideas seriously.

In Tippett’s view, the binaries that we use to discuss faith—either believer or atheist—slip into the way that we discuss our politics—either pro-choice or pro-life; either liberal or conservative—and don’t do justice to the complexity of our actual worldviews. In one conversation, Tippett asks the science writer Margaret Wertheim if she is an atheist. Wertheim responds by citing the idea of love in Dante’s Divine Comedy—“a love that moves the sun and the other stars”—and suggests that her belief in such love might mean that she believes in God. Still, she tells Tippett, “Our conception of what divinity means has become so trivialized and banal that I think it’s almost impossible to answer that question without dogma.” Indeed, while Tippett starts every interview by asking her guests about the religious or spiritual backgrounds to their childhoods, she rarely asks them to define the theological beliefs they hold today.

The challenge of abandoning traditional religious words, of course, is that even if they are, in fact, banal, they can still be useful. Without them, you must confront the difficult task of describing the ineffable. So Tippett splits the difference: She incorporates concepts like wonder, awe, grace, mystery, holiness, richness, or fullness into secular contexts. (In a recent conversation with Dave Isay, the creator of the NPR program StoryCorps, she asked about the “sacred space” of a recording booth.) Tippett believes that our long history of using these words to label enormous feelings has given them a power of their own, and that they can still illuminate the profundity in our lives. On one episode of On Being, the poet Marie Howe says that poetry’s “roots can never wholly be pulled out from sacred ground.” Tippett’s show tests this principle in reverse: It attempts to discover whether the poetic plant can make the ground sacred. Perhaps, by using religious words in a secular way, we can evoke a reverence for existence that’s independent of religious belief as such.

Tippett’s oblique approach to religion feels familiar to me. I grew up attending an experimental synagogue in Greenwich Village that was founded by a friend’s lesbian parents. We prized community over creed and wrestling with tradition over upholding it. During one holiday, our cantor even declared, “We’re all atheists here!” My life philosophy, in short, was expected to be one of my own design. Tippett’s ideas, too, have this DIY quality. Faith, for Tippett, entails no particular set of convictions or beliefs. Instead, it’s a kind of curiosity—a willingness to stand amidst the mysteries of life without demanding certainty. In whom or what faith is placed—that’s incidental. It’s the process of investigation that matters. “Spiritual life is a way of dwelling with perplexity,” she writes.

Still, even this broad definition of faith can cause trouble. Becoming Wise contains several conversations with cosmologists and physicists; in their “reverence for wonder and the possibility of never-ending discovery,” Tippett sees a kind of spirituality. This can occasionally cause her and her guests to disagree. When the theoretical physicist Brian Greene describes the power of quantum mechanics to map the universe’s unseen truths—“How can you not be in awe of that? And how can you not be convinced that that is revealing some deep truth about reality?”—Tippett asks, with obvious hopefulness, about the aspects of life (love, consciousness) that “can’t be measured.” Greene, a materialist, delivers the bad news that even love is measurable: It comes down to “some physical process playing out inside this messy grey blob inside of our heads.” To Greene, the ultimate nature of reality may be unknown, but it is not unknowable.

There are limits, in short, even to Tippett’s radically open definition of faith. And as a fan, it can be jarring to hear her bump up against them. But even in the same breath, she succeeds in other ways. She might not share Greene’s worldview, but she finds common ground with him in the experience of wonder; in the end, they agree that his work is like poetry in its reverence for exploration. “Science deserves to be right smack in the center of culture, because it is our quest to understand who we are and how we fit into the big picture,” says Greene. With inspiring regularity, On Being captures moments when people with differing beliefs manage to find meaning together.

Many people do, however, object to Tippett’s work, often for aesthetic reasons. Some find her heartfelt conversational manner embarrassing, and recoil from her touchy-feely clichés. One friend of mine complains about her reflexive hums of assent—“mmmmm-hmmmm”—which, he says, make her empathy seem too stagey and self-aware. Even a woman I met while carpooling to a silent-meditation retreat dedicated to the cultivation of loving kindness told me that Tippett’s way of asking questions is “too emotional.”

It may be that her detractors are picking up on a certain disingenuousness to the show. Surely, when it comes to questions about spirituality, Tippett is not a disinterested party. Her sympathies plainly lie with a particular spiritual conception of the world, in which love, goodness, and beauty are powerful forces, and she wants her listeners to feel similarly hopeful. She keeps her fingers on the scale, to ensure that her shows end in communion rather than confrontation, and to help her audience to leave with hearts replenished. In some ways, she is like a foil to the hosts of conservative talk radio, who use politics and fearmongering to prop up their theology; On Being delves into the ambiguities of existence’s big questions to remind us that, despite the dividing lines we draw, we all belong to each other. What other gurus have done for yoga or meditation, Tippett has done for conversation: She’s turned it into an agnostic ritual.