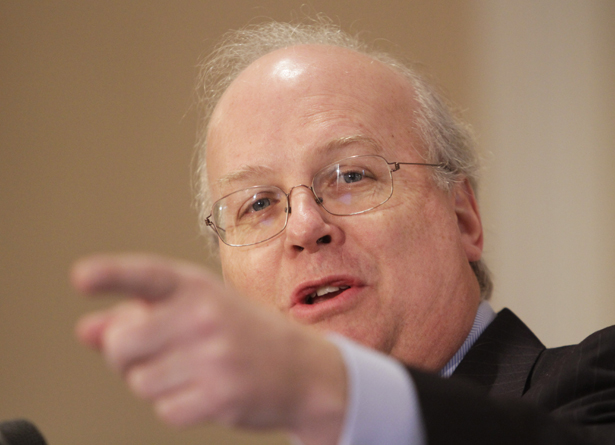 Karl Rove has committed felonies—uh, not felonies, I mean smears. To avoid any confusion, I’ll repeat: Karl Rove has not been convicted of committing felonies. But he has committed smears (not unlike the one I just committed on him). And, virtually unnoticed by the media, he has smeared again, yesterday on Fox News Sunday.

It was recently revealed that Paul Davis, the Democratic candidate for governor of Kansas, had a most awkward moment sixteen years ago. Police raided a strip club near Coffeyville for drugs and found Davis, then 26 and unmarried, getting a lap dance. He wasn’t accused of any wrongdoing, no charges were brought against him, and even in Kansas, lap-dancing isn’t illegal.

Still, the lap-dance story is fair game for supporters of Sam Brownback, the embattled Republican governor who’s running for re-election. On Meet the Press yesterday, Grover Norquist, for example, interrupted his anti-tax talk to relate the lap-dance incident (“with the naked lady”), which Thomas Frank later shot down as ancient small fry.

But over at Fox, Rove dramatically raised the stakes for Davis, saying that Kansas’s possible future governor had been “arrested”:

The governor’s race in Kansas is close. However, late last week, it was revealed that the Democratic candidate for governor had been arrested—or not arrested, he’d been detained briefly a number of years ago when he was an attorney for a strip joint and the police found him getting a lap dance.

Fox News Sunday anchor Chris Wallace let it slide, presumably because Rove corrected himself. But the “correction” allowed Rove to repeat the word “arrested,” a word that, even when used in the negative, Fox viewers can now associate with Davis and repeat until it seems true. No small thing when many diehard Republicans in Kansas are so disgusted with the devastation wreaked by Brownback’s tax cuts, that they’re actually considering a vote for Davis.

Of course, Rove may have simply made an honest slip of the tongue. But “Bush’s Brain” has a long list of such ambiguous slips.

Most recently, he suggested that Hillary Clinton had suffered a “traumatic brain injury.” Several months after her December 2012 fall, which caused a blood clot, Rove said, “Thirty days in the hospital? And when she reappears, she’s wearing glasses that are only for people who have traumatic brain injury? We need to know what’s up with that.” She was hospitalized for three days, not thirty, and later that day Rove tried to deny (while simultaneously reinforcing) his innuendo, saying, "Of course she doesn’t have brain damage.”

“You could believe Rove’s denial—but you would have to ignore virtually his entire political career,” as George Zornick wrote in The Nation. “For decades Rove has been circulating nasty, personal rumors about political opponents and placing them in the public conversation, all while obscuring his fingerprints, making the rumors become the opponent’s problem, not his. It’s page one of his playbook.”

A protégé of the late Lee Atwater, the GOP dirty trickster who once boasted that “states’ rights” and “tax cuts” could be used as code words for “nigger,” Rove has been associated with whisper campaigns suggesting that his clients’ opponents were homosexual (Texas governor Ann Richards in 1994), pedophiles (a Democratic candidate for Alabama Supreme Court, also in ’94), or mentally impaired (John McCain in 2000). “Other rumors tied to the Rove-led campaign” in 2000, writes Think Progress, “included allegations that McCain’s wife had a drug problem and that his adopted Bangladesh-born daughter was an ‘illegitimate black child.’”

Rove is sparing Davis the “mental” and “homo” tags, but having him “arrested” just might do the dirty trick. (And it might help obscure reports, cited by Davis, that the FBI is investigating the fund-raising and lobbying practices of Brownback associates. Brownback has denied any wrongdoing.)

As for Davis, a Kansas state representative, he released a statement to Politico on Saturday. “When I was 26 years old, I was taken to a club by my boss—the club owner was one of our legal clients,” he said in the statement. “While we were in the building, the police showed up. I was never accused of having done anything wrong, but rather I was in the wrong place at the wrong time.”

On Fox, Rove was, once again, in the right place at the right time to say the wrong thing.