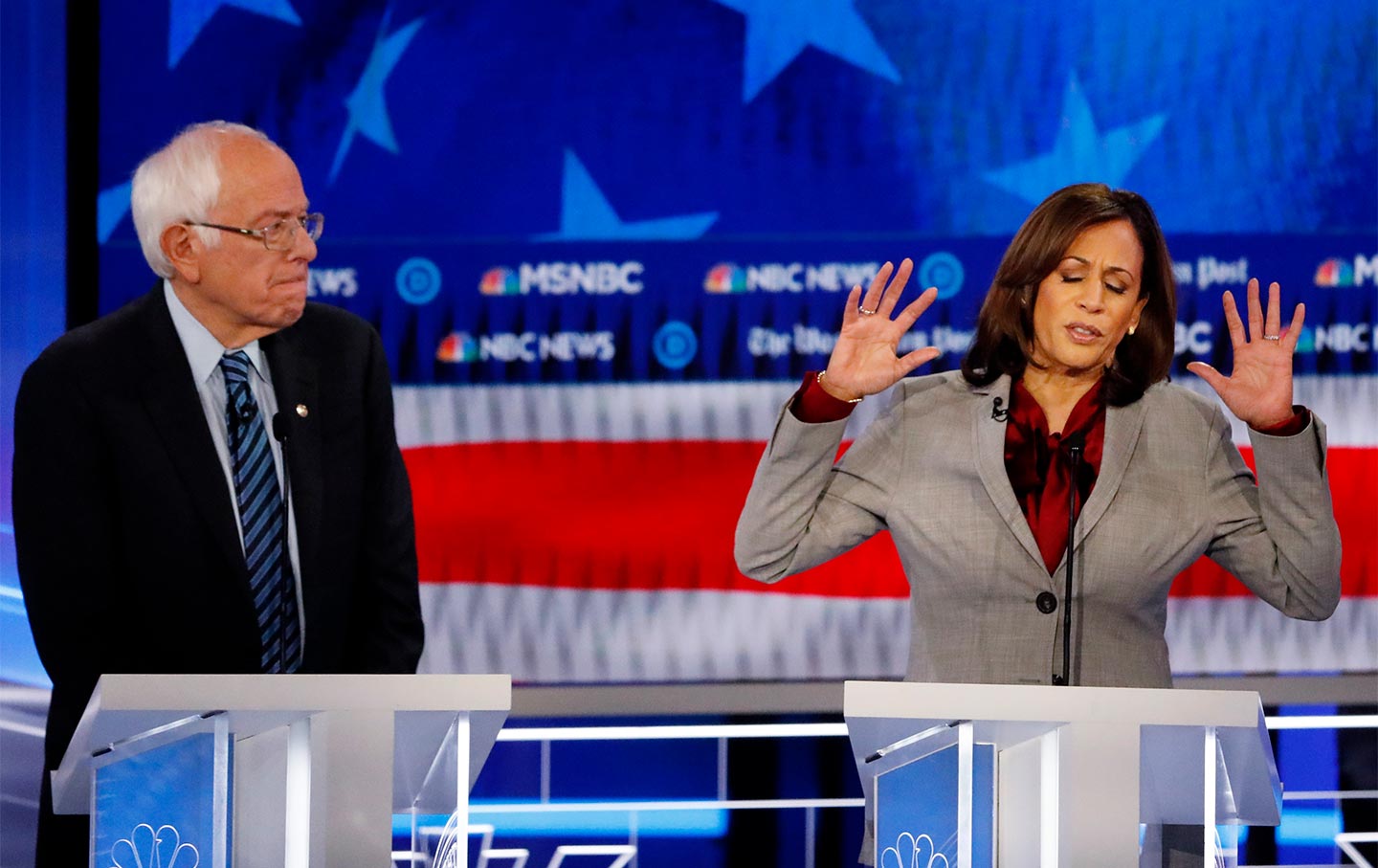 Christine Pelosi, who knows a thing or two about politics, had a sound take on Kamala Harris’s decision to suspend her bid for the 2020 Democratic presidential nomination.

“We can’t tell the story about Kamala Harris 2020 without speaking of sexism, misogynoir, and big money in politics,” tweeted Pelosi, a longtime Democratic National Committee member, former executive director of the California Democratic Party, and member of a family that has been active at the top tier of Democratic politics since FDR’s day. “Kamala has the integrity to see that she could overcome 1 or 2 but not all 3. Whichever candidate you choose as Democrat for president, fight to dismantle all 3.”

In her announcement Tuesday, Harris emphasized the “big money” issue:

My campaign for president simply doesn’t have the financial resources we need to continue.

I’m not a billionaire. I can’t fund my own campaign. And as the campaign has gone on, it’s become harder and harder to raise the money we need to compete.

In good faith, I can’t tell you, my supporters and volunteers, that I have a path forward if I don’t believe I do.

So, to you my supporters, it is with deep regret—but also with deep gratitude—that I am suspending my campaign today.

Harris also pointed out that “our campaign uniquely spoke to the experiences of Black women and people of color—and their importance to the success and future of this party. Our campaign demanded no one should be taken for granted by any political party.”

Democrats would do well to pause and reflect on that message and her conclusion that: “We will keep up that fight because no one should be made to fight alone.” The party now faces the prospect that its next debate could feature only white contenders; so far just Joe Biden, Elizabeth Warren, Tom Steyer, Bernie Sanders, Amy Klobuchar, and Pete Buttigieg have qualified. New Jersey Senator Cory Booker, a candidate who has yet to qualify for the debate, says, “We’re spiraling towards a debate stage that could have six people with no diversity whatsoever.”

Progressive commentator Sally Kohn was blunt about the way a historically diverse field is narrowing as the caucuses and primaries approach.

Even those who have acknowledged differences with Harris on issues and campaign strategies were frustrated by the abrupt exit from a still-crowded field by a senator who represents the largest state in the nation; who, in 2017, became the second African American woman and first South Asian American to serve as a member of the chamber; and who has distinguished herself on Capitol Hill and on the campaign trail as a strikingly effective advocate.

Novelist and Nation columnist Laila Lalami said, “Kamala Harris wasn’t my candidate, but I’m disappointed that she had to drop out while Bloomberg buys his way into the race and Buttigieg evades the scrutiny she’s received on policing.”

Here’s something that adds to the disappointment. By most reasonable measures, Harris was the field’s ablest debater.

Much has been made of Harris’s confrontation of the front-runner, former vice president Joe Biden, during the first round of Democratic debates, over statements he had made praising segregationist senators, as well as his opposition to court-ordered school busing. Vox called the exchange “the standout moment of the entire first debate.”

With masterful skill, Harris combined a powerful policy critique with poignant personal history. Her command of the debate stage “was so overwhelming that almost every unaligned journalist I saw on Twitter, ranging from left to right, agreed that she won,” wrote New York magazine’s Jonathan Chait, who observed, “Debates don’t always matter or have clear effects, but the second night of the first round had one very likely effect: Kamala Harris is going to be propelled into the first tier of candidates.”

Harris got a boost, but she never overtook Biden, and as the summer wore on, she struggled to keep up with the two progressive contenders who have been consistent top-tier contenders, Senators Elizabeth Warren and Bernie Sanders. By the early fall, Harris was struggling to keep up with South Bend Mayor Pete Buttigieg. In the last poll, before she suspended her campaign, a The Hill/Harris survey reported that she was trailing Biden, Sanders, Warren, Buttigieg, and Bloomberg with just 2 percent support.

But here’s the twist. Even as she fell in the polls, Harris continued to turn in stellar debate performances. She wasn’t just solid. She was compelling, effective, and memorable. She held her own against other candidates—when they attacked her and when she was going after them—and, just as importantly, she came at issues with bold and quick-witted language. It wasn’t necessary to agree with Harris—and I often did not—to recognize that had she been nominated, she would have shredded Donald Trump (or any other Republican) in the fall 2020 debates.

A Politico review of the November debate gave the Californian high marks:

Harris put in a solid showing, commanding plenty of speaking time while continuing to hammer the central message that she’s best equipped to defeat Trump. She made an impassioned appeal for her ability to “rebuild the Obama coalition” and court black voters—a critical part of Harris’s potential path to the presidency—rebuking Democrats who “show up in a church” during election season but neglect “the backbone of the Democratic party.”

And she nailed it in the foreign policy debate, where she had the crowd laughing and cheering when she declared that the president “got punked” by North Korean leader Kim Jong-un.

The Harris campaign had its problems, as has been well documented. The New York Times suggested that it had “unraveled” even before she quit. But if debates mattered as much as they’re supposed to, the strength of her presentations—not just in the first round but also in those that followed—should have buoyed the senator’s bid. That they didn’t tells us these huge broadcast and cable productions may not mean nearly as much as the producers imagine.

If that’s the case, then perhaps, as we ponder all the issues raised by Harris’s exit, we should also reconsider how the debates are organized and presented.