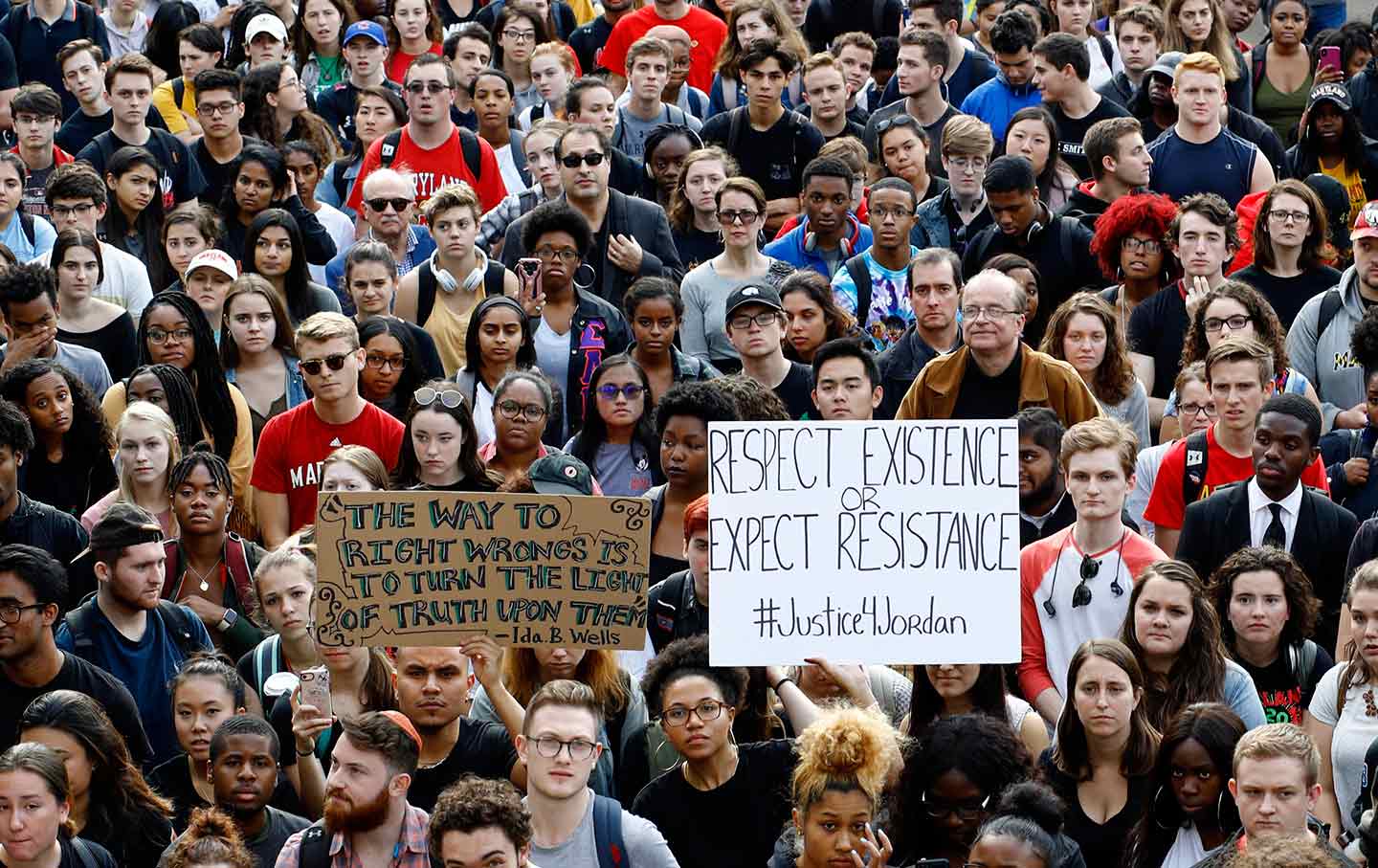 Injustice inevitably will produce resistance and resistance can ricochet in all kinds of unexpected directions. The previous week at the University of Maryland has been a case study in this process. It started, as we have covered here at The Nation, with the horrific death by heatstroke last summer of 19-year-old football player Jordan McNair.

The school at first did nothing, with no one taking responsibility for what was a gross case of negligence. Then the school suspended head coach D.J. Durkin, pending an investigation, but only after ESPN’s Heather Dinich published an explosive report about the “toxic” bullying culture that led to McNair’s death. Finally, after months of investigations and reports, the Board of Regents gobsmackingly decided earlier this week to reinstate Durkin. Uproar immediately exploded on the team, in the media, and on campus, and within 24 hours, the Board of Regents backtracked and Durkin was gone. The backlash was so severe that the head of the Board of Regents, James Brady, resigned as well. It was an absolute whirlwind of change in a matter of days.

Then it accelerated even further. On Thursday, hundreds of students came together to rally for “Justice for Jordan.” The event was originally called by the normally staid Student Government Association before Durkin had been dismissed. They almost certainly would have canceled it following his dismissal, but that option was not on the table. There was too much anger, too much disgust, and too much steam to be contained. But the SGA tried. At the rally itself, they argued for everyone to pack the football stadium this weekend as a tribute to Jordan McNair. They were even handing out free tickets. To an angry student body, they were prescribing school spirit. But a large section of students were not having it. Still outraged over the handling of Jordan’s death, they instead began to chant “Black Lives Matter,” “Where’s the Justice,” and “Boycott”—as in boycott the football team whose practice, in the words of one student, “has led this school to becoming a crime scene, the setting of an unprosecuted negligent homicide.”

The rally then split in two between the SGA establishment and students who were not ready to say that everything was all of a sudden peachy-keen in College Park. Within hours, 26 student groups came together in an effort to push the “Justice for Jordan” movement forward to ensure that such a decision could never happen again. Their statement is below. They call for “institutional,” democratic, and transparent change on campus and an entire reworking in how the Board of Regents operates. They are holding a rally this Monday to further put forward their positions. It’s a bold statement. But fortune favors the bold. Especially at this moment. Read their position paper below. It’s a model of students not relying on the ballot box or resigning to passivity in the face of injustice.

In order to achieve institutional change, we demand:

Earlier today, Provost Mary Ann Rankin and several Deans at this university called Dr. Loh’s leadership “critical for the university at this challenging time,” and called upon the Board of Regents and the Chancellor to “publicly affirm its support for Dr. Loh’s continued leadership” of UMD. We wholeheartedly disagree and unequivocally call for President Loh to uphold his retirement.

President Loh and senior university administrators have abdicated leadership in the midst of extreme crisis, trauma, and violence. But President Loh’s abysmal and cowardly leadership goes beyond Jordan McNair and the athletics department. President Loh and the Board of Regents have consistently prioritized profit and “development” at the expense of students.

Under President Loh’s leadership, the university’s consistent inaction has led to a culture which normalizes and nurtures racism and hatred. Dialogue, committees, task forces, and commission reports have proven insufficient in preventing such acts of violence. The administration holds institutional power, and is thus responsible for creating the institutional changes we need to prevent negligence and acts of violence.

We demand that President Loh’s leadership over this university be permanently ended. We demand that the bylaws of the Board of Regents be amended to include and prioritize student input into the appointment of his successor, as well as the appointment of all future presidents and the creation of future university policies. We demand that the Board of Regents, one of the most important and influential forces in this university system, becomes a democratically elected body that will more accurately represent the needs of Maryland students. Though these are our immediate demands, there remains far more to be done before the University of Maryland is a safe and nurturing place for all of its students, faculty, and staff. We the students remain committed to further action and organizing on behalf of our communities.

The toxic environment at the University of Maryland can only be corrected through an exodus of the current leadership, named above, and active student involvement in the appointment of new leaders and policies that will uphold the values of the flagship campus of the University System of Maryland. We call upon fellow students, staff, faculty, alumni, campus community members, and elected public officials to join us in our calls for justice and student power on Monday November 5th at 3:30 PM in front of McKeldin Library.

National Pan-Hellenic Council at the University of Maryland

Political Latinxs United for Movement and Action in Society

Students for Justice in Palestine