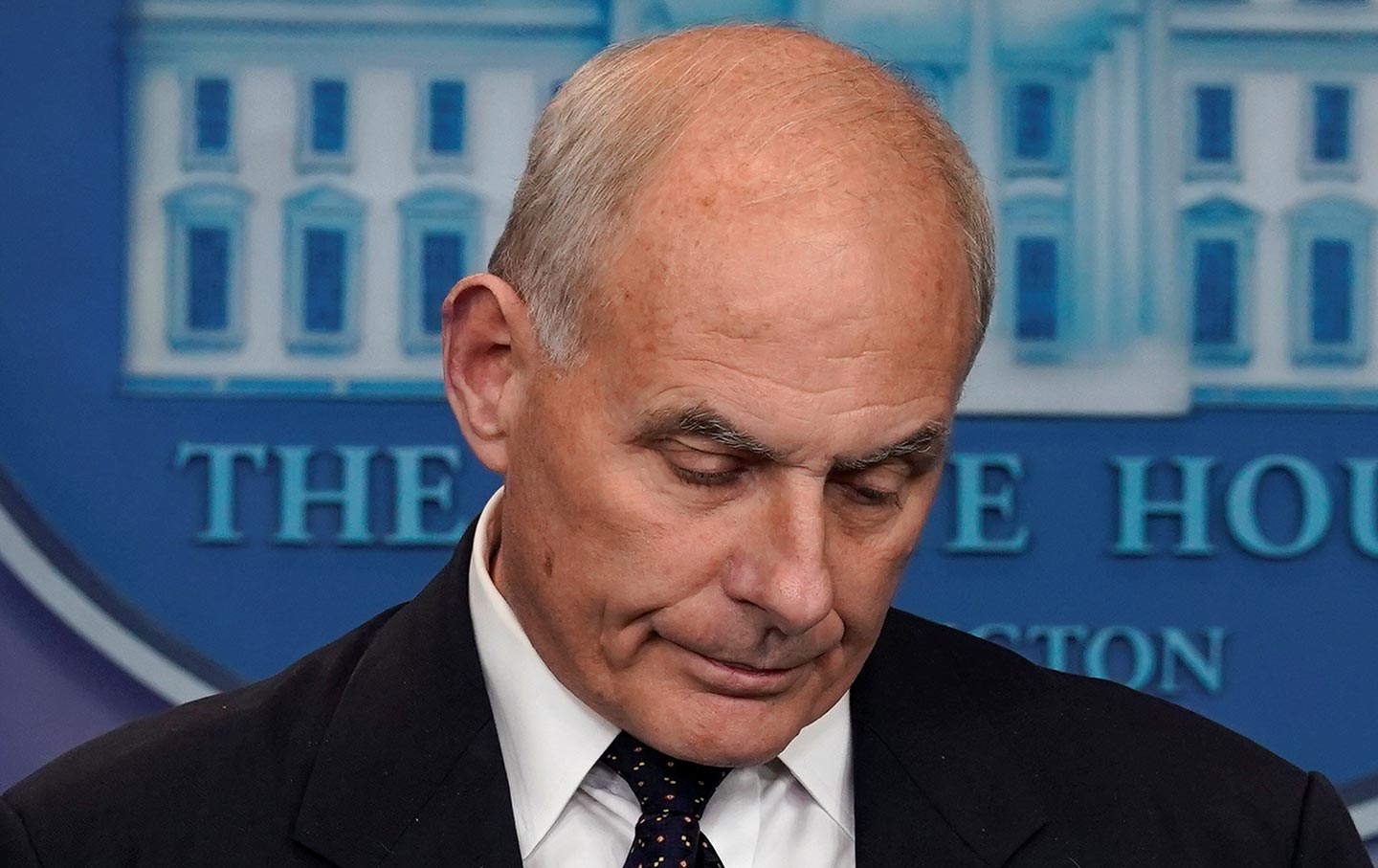 No one who was paying attention ever thought that John Kelly was going to make things better in the Trump administration when he abandoned his miserable tenure as Homeland Security secretary to take over as White House chief of staff. Kelly had already proven to be an enabler of Trump’s worst instincts on immigration, global relationships, and privacy rights, and there was no reason to assume that closer proximity to the president would make Kelly any less of a “yes man” for Trumpism at its worst.

But Kelly really has outdone himself.

With his scorchingly dishonest and demeaning attacks on one of the most honorable members of the House, Florida Congresswoman Frederica Wilson, to his deliberately ignorant claim that a “lack of appreciation of history” inspired efforts to remove monuments honoring the Confederacy, to his ahistorical suggestion that “the lack of an ability to compromise” led to the Civil War, to his efforts (with alt-right favorite Stephen Miller) to derail negotiations on immigration reform, to his recent claim that many Dreamers were “too lazy” to apply for the Deferred Action for Childhood Arrivals (DACA) program, Kelly has accomplished something remarkable. He has established that, as wrongheaded as Donald Trump may be, the president is being advised by people who are more wrongheaded.

As Congressman Luis Gutiérrez, the Illinois Democrat who serves as head of the immigration task force for the Congressional Hispanic Caucus, says, the retired general who many thought would “[steer] a steady course and bring some balance to the White House, Mr. Kelly, is not that person, and he is clearly part of the xenophobic right that is entrenched in this White House.”

Kelly is not merely xenophobic, however. He has proven to be an atrocious player on multiple fronts.

This week, as reports of White House Staff Secretary Rob Porter’s physical abuse of women became public, CNN notes that “Kelly, who encouraged Porter to remain in his post despite the allegations, did not alter his effusive statement.” The “effusive statement” from Kelly read: “Rob Porter is a man of true integrity and honor and I can’t say enough good things about him. He is a friend, a confidante and a trusted professional. I am proud to serve alongside him.”

Only after Porter resigned was it announced that the chief of staff was “shocked” by the “new allegations” about his top aide. When pressed about reports that Kelly knew as early as last fall that both of Porter’s ex-wives had accused him of abusing them, CNN said, “The White House declined to comment on Wednesday when asked about Kelly’s knowledge of the allegations against Porter.”

Democratic members of the House, led by California Congressman Ted Lieu have sent a letter to Kelly asking him to explain when he had knowledge of the allegations of domestic abuse by Porter and what actions he took given that knowledge.

The letter to Kelly, which was signed by Lieu and Representatives Pramila Jayapal of Washington, Jamie Raskin of Maryland and Brenda Lawrence of Michigan, noted that:

Senator Jon Tester, D-Montana, responded to reports on the Porter affair by saying, “If John Kelly is covering this up, he needs to be held accountable. He better have a really good reason. Otherwise, he’s gone, too.”

The Senate cannot remove Kelly, as the chief of staff is a direct presidential appointee who is not required to go through the confirmation process that is required for cabinet members and agency heads. So the issue of removal goes to Trump.

Or Kelly could resign.

National Organization for Women President Toni Van Pelt argues, well and wisely, that the time for Kelly to remove himself has arrived.

“White House Chief of Staff John Kelly must resign. His pathetic defense of staff secretary Rob Porter reveals his true nature—an enabler of sexual abusers, a betrayer of trust and an avoider of responsibility,” says Van Pelt, who asks: “Why did John Kelly continue to support Rob Porter after he was told about Porter’s history of abuse? Why did he allow a man who was denied a security clearance because of his history of violence against women to continue in a high ranking position of trust? Why did he talk Rob Porter out of resigning, telling him he could ‘weather the storm,’ according to press accounts?”

General Kelly should know better. As a military commander, he took pride in protecting his troops. As chief of staff, it is his duty to protect the people who serve in the White House. Women who work for John Kelly are asking themselves today if they can trust General Kelly to protect them from sexual predators.

Clearly, they can’t. John Kelly has shown his true colors. He’s on Team ‘Grab Them By The Pussy,’ leaving women who are victimized by sexual violence to fend for themselves.