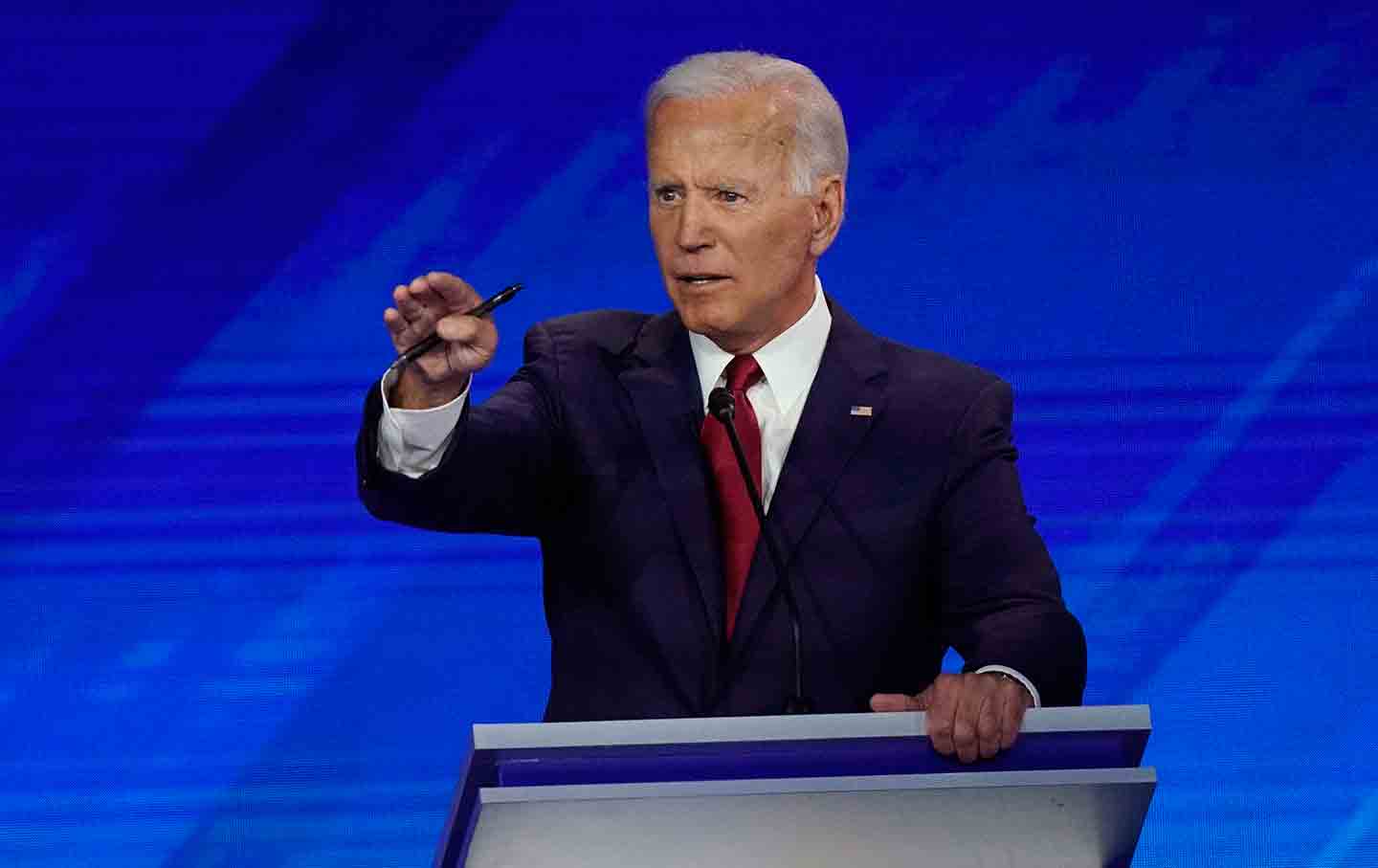 George W. Bush wasn’t known for his way with words, and yet one phrase from his 2000 presidential campaign has infiltrated my political lexicon: “the soft bigotry of low expectations.” Bush was talking about low educational expectations for poor kids of color, but I always use it when I see the pundit class praise a politician who’s flailing—just because he hasn’t drowned yet.

Vice President Biden is getting a break from “the soft bigotry of low expectations” in terms of assessing his debate performance last night. No, he didn’t rant, prevaricate, or unravel. But he did not do well—not by any standard other than “well, he woke up Friday morning and he’s still in the race.” He is, but he won’t be for long if he doesn’t pull it together.

“Biden delivers the debate performance he needed, despite occasional missteps” was the headline on The Washington Post’s lead piece, by the respected Dan Balz (the headline later changed, I don’t know why). Balz thought Biden passed the test, ruling that he’d “delivered the kind of performance his supporters have been waiting for—combative when needed and in the thick of the action throughout…. On balance this was the kind of evening he needed.”

The Balz piece reads like he wrote his lede early—Biden indeed came out strong and combative; I wrote that myself, at the top of my notes when the debate began—and couldn’t bring himself to revise it when Biden stumbled. It’s true that right away, Biden was focused and feisty, bringing the fight to Senator Elizabeth Warren on Medicare for All. While I support Warren’s position, I thought Biden raised valid questions about costs. (Personal PSA: While Warren and Senator Bernie Sanders correctly say Americans will spend less under their plan, they will in fact be taxed more, and I think both of them, along with Senator Kamala Harris, who has her own Medicare for All plan, need to be more nimble in admitting taxes will rise while explaining how actual per-person medical spending will fall. So far, they’re not always succeeding.)

Biden’s worst answer by far came when he was asked about the issue that’s dogged him most: his various stands on race, going back to the start of his career in the 1970s. Barack Obama’s vice president has unnecessarily complicated this story many times, most notably in June when he publicly boasted about getting along with Senate segregationists when he first came to Washington. Looking back at those years, ABC moderator Linsey Davis came to Biden with a question about, as she put it, “inequality in schools and race.” It got weird right away, when Biden smirked and chuckled at her question inappropriately, and then it went all the way downhill.

BIDEN: Well, they have to deal with the—look, there’s institutional segregation in this country. And from the time I got involved, I started dealing with that. Redlining banks, making sure that we are in a position where—look, you talk about education. I propose that what we take is those very poor schools, the Title I schools, triple the amount of money we spend from 15 to 45 billion a year. Give every single teacher a raise, the equal raise to getting out—the $60,000 level.

The teachers are—I’m married to a teacher. My deceased wife is a teacher. They have every problem coming to them. We have—make sure that every single child does, in fact, have 3-, 4-, and 5-year-olds go to school. School. Not daycare. School. We bring social workers in to homes and parents to help them deal with how to raise their children.

It’s not… they don’t want to help. They don’t—they don’t know quite what to do. Play the radio, make sure the television—excuse me, make sure you have the record player on at night, the phono… make sure that kids hear words. A kid coming from a very poor school—a very poor background will hear 4 million words fewer spoken by the time they get there.

BIDEN: There’s so much we—no, I’m going to go like the rest of them do, twice over, okay?

Because here’s the deal. The deal is that we’ve got this a little backwards. And by the way, in Venezuela, we should be allowing people to come here from Venezuela. I know Maduro. I’ve confronted Maduro.

Number two, you talk about the need to do something in Latin America. I’m the guy that came up with $740 million to see to it those three countries, in fact, changed their system so people don’t have to chance to leave. You’re all acting like we just discovered this yesterday. Thank you very much.

DAVIS: Thank you very much.

Where do I begin? Standing next to Biden, Bernie Sanders looked stoically into space, Elizabeth Warren intensely examined her notes on the podium, and on the other side, Kamala Harris stared in the opposite direction as though she couldn’t bear to watch. I know how they felt.

First of all, maybe 40 years ago it was all the rage, in white male moderate Democratic circles, to say about race, “I’ll be damned if I feel responsible to pay for what happened 300 years ago.” I know I heard it from my uncles, but they all wound up becoming Republicans. Biden absolutely needs to confront the way he dealt with race in the 1970s and ’80s and explain it, and in my opinion apologize for it. But at any rate, make clear it’s not the way he feels today.

From there… I don’t quite know how to break down his answer without being mean. I love the idea of dramatically increasing the money going to Title I schools. I don’t love depicting poor black families (and we assume they are black since the question is about the legacy of slavery and segregation) as broken and needing social workers, though some do. We can get hung up (and I admit I did) on Biden saying they also need “record players”—and to this 60-year-old, it sounded like he was about to say “phonographs,” but whatever—but the real problem is his deficit-focused approach to the lives of low-income black families, and that’s not funny.

And where Venezuelan President Nicolas Maduro fits in I’m not sure—except I think Biden was showing that, unlike in earlier debates, he’s willing to run over his time and answer a question about Venezuela that was asked of Bernie Sanders? Well, OK.

I happen to think this was, overall, the best debate to date. Sanders and Warren had very good nights, and so did Harris, who handled a tough question from Davis about her background as a prosecutor as though she was waiting for it (and no doubt she was), and by most accounts, she did very well. Harris also got off one of the best jibes of the evening, comparing Trump to the Wizard of Oz: “When you pull back the curtain it’s a really small dude.” (Still waiting for Trump to tweet about it.)

Former San Antonio mayor Julian Castro had some breakout moments, but they were overshadowed by his decision to seemingly tweak Biden for his age and/or forgetfulness. In an exchange about Biden’s health care plan, he needled him: “Are you forgetting what you said two minutes ago? Are you forgetting already what you said just two minutes ago? I mean, I can’t believe that you said two minutes ago that they had to buy in and now you’re saying they don’t have to buy in. You’re forgetting that.” Politifact found that Castro was misrepresenting Biden’s plan. I admire Castro, but I wish he’d just left the issue alone.

On the other hand, some of the struggling Democratic candidates might correctly fear that their party’s front-runner does, indeed, benefit from “the soft bigotry of low expectations.” Here’s how former Harry Reid aide Adam Jentleson, who is currently the smartest strategist for the “resistance,” put it on Twitter today, regarding the Balz piece:

This is the curve Biden gets graded on. His unsettling incoherence is spun as “occasional missteps” and his shouting as energy. How do we think a female candidate would be covered if she spent most of the debate yelling and rambling incoherently?

We know the answer to that.