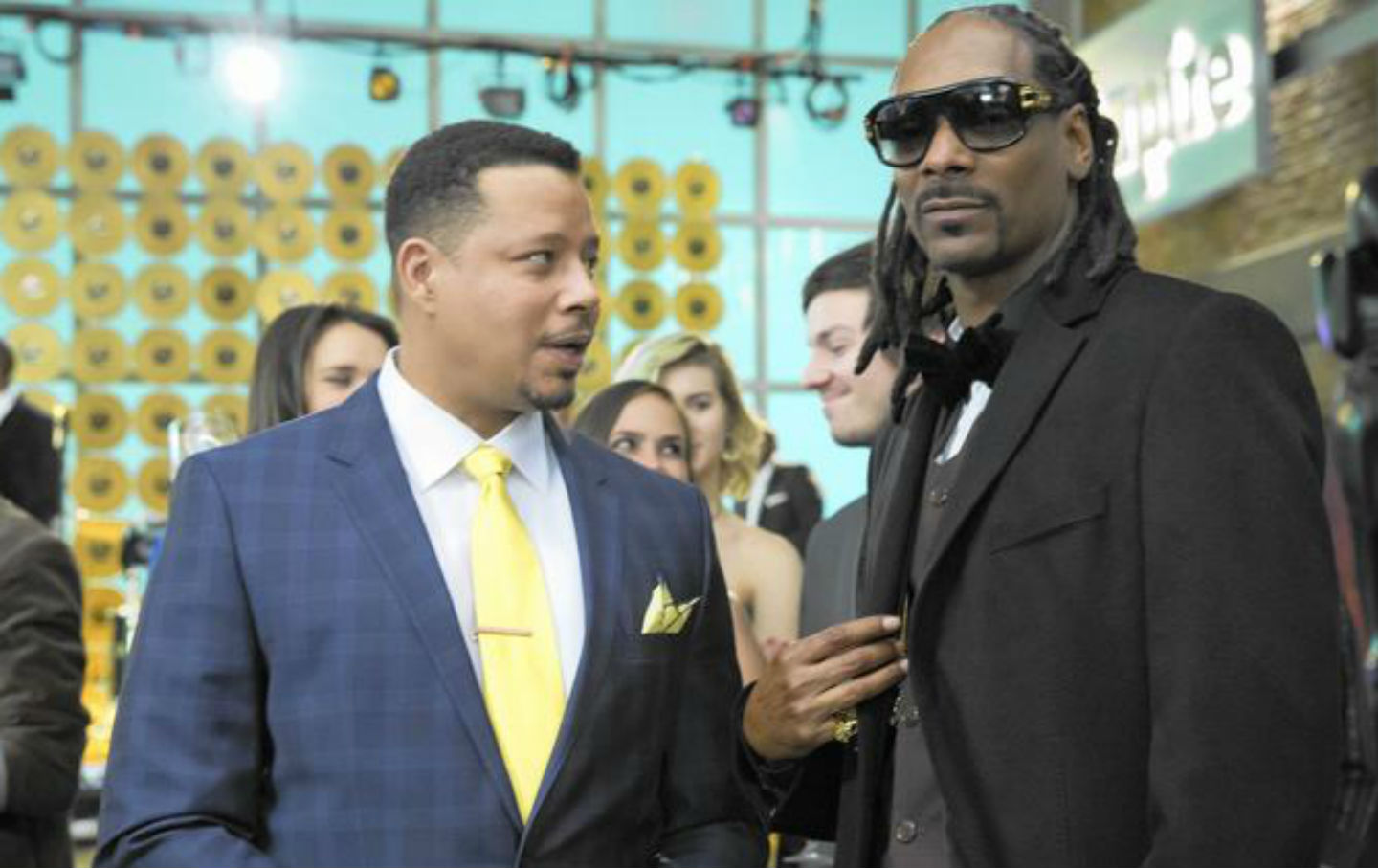 Lucious, played by Terrence Howard, chats with Snoop, guest-starring as himself, in the season finale episode of Empire. (Chuck Hodes/Fox)

As Empire closes its first season burning bright, it has been called Glee for grownups, the successful city cousin of Nashville; there is truth in these assessments. This map of musical taste is suggestive. Country and hip-hop are the two great indigenous musics of the US left standing, and the most disavowed: “I listen to everything but country and rap” is standard first-date chitchat, and the purest formula of class and race contempt on offer. Network television doesn’t disavow all that much. It mostly crunches numbers.

But: show choir? There is something about sexuality here, about the show’s compassionate, candy-colored queerness. This identification is inextricable from musical constraints. While the recurrence of the mash-up was one way Glee fitted songs to a chorus with mixed gender soloists, the go-to solution was tunes originally sung in high or falsetto male vocal, thus suiting all of the genders some of the time. “Don’t Stop Believin’” is the alpha and the omega. Unfamiliar as it is to hear Journey this way, the show’s music was in some sense trans, secondary character Unique its truest expression; we might think of Glee as an upbeat redaction of Hedwig and the Angry Inch.

These then are the coordinates, musical and social, of the small screen musical, along with its roots in the variety show. But there is another genealogy: from the moment the mp3 compression algorithm was developed, Empire was inevitable. Glee and Nashville were inevitable, just as American Idol was inevitable. Once albums could be digitized efficiently, piracy was inevitable. But so too, in the way of digital dialectics, was a vast apparatus which would both disarticulate songs from albums and sell the new singles cheap’n’easy enough to compete with the pirates. They would also avoid the snares of radio release. Instead, they would require an entire genre of shows about music-making.

This cannot be explained simply by the culture industry’s self-regard, its need to narrate its own conditions. Rather, there was no other way to preserve the music business. The singles would be embedded in shows as incomplete teasers, parts of a narrative from which they were easily detachable (note the identicality of Glee’s intensifying series of interschool competitions with Idol’s format). Most importantly, they wouldn’t be released in another format.

This created a brand new release time: the window after the show aired but before someone grabbed a recorded file of the complete song, cracked it and set it free. Into this window, the new now, enter first the 99¢ performances from Idol, and then the songs of Glee. As so often, covers precede originals. Over and over they get up for the download, climbing the new charts.

Originals would follow. Enter Nashville and Empire (we do not speak of Smash). The former has not quite found its way to the titanium majesty of New Nashville haunting its dreams; the latter is advantaged, surely at great cost, by its music producer. One of the two greatest producers of our era, Timabaland has always moved sinuously from R&B to hip-hop, drawing them into a syncopated and hypnotic vortex of futuristic newer-than-new jack swing. With his collaborators, he provides Empire with more than the telenovela-noir could ask for.

Yet we have passed too swiftly over the pivotal figure. Without the iTunes store, nothing; it’s the apparatus of capture that makes this whole complex work. And it’s Apple that provides a frame for thinking about the broader significance of these offerings. While the backstory of Empire’s musical-turned-entrepreneurial god Lucious Lyon cosmetically resembles, say, L.A. Reid, the Arista and Epic label head, that decoding style finally won’t do. After all, Nashville’s Rayna Jaymes, Rebaesque in her musical achievements, also founded and directs her own “independent” but corporate-scaled label, finessing deals with big box stores while debuting new products.

Both in turn, surprisingly, are scaled-up versions of Will Schuester. Glee’s show choir director was once a star performer; for the show’s span, he navigates the rules, regulations and cutthroat competition on behalf of his ever-changing stable of young artists, taking them from small town to national brand.

Claude Levi-Strauss teaches us that, encountering a certain myth over and over, we should ask what social contradiction it is struggling impossibly to resolve. Who is this figure whose genius moves freely between creative and corporate ventures, artist and executive? It can only be Steve Jobs. That is his entire claim: that he overcame not just the random distribution of talent but the iron division of labor, imagining innovation after innovation while directing the businesses of what would be the world’s most valuable company. He is Lucious, Rayna and Will all wrapped up in one.

The theology of Jobs, consecrated in the obscene shrines erected outside Apple stores on his death, is the theology of capitalism, wherein owners of the great edifices, the great apparatuses, deserve the billions because they are geniuses, originators. They literally make money from nothing; the process of its production both begins and ends with them. Or so goes the myth, not just for Jobs but every captain of industry. In such figures, the contradiction between the labor of making and the taking of profits is dissolved, if only in the fantasies these shows purvey.

I like these shows, as I like my laptop. But this is what must be destroyed. Those songs on Empire are riveting. So is the poetry of Xu Lizhi, another artist and maker of Apple products:

We ran along the railway,
arriving in some place called ‘the City’
where we trade in our youth, and our muscle.
Finally we have nothing to trade, only a cough
and a skeleton nobody cares about.

A Foxconn worker, Xu committed suicide at 24. He wanted to be a librarian.