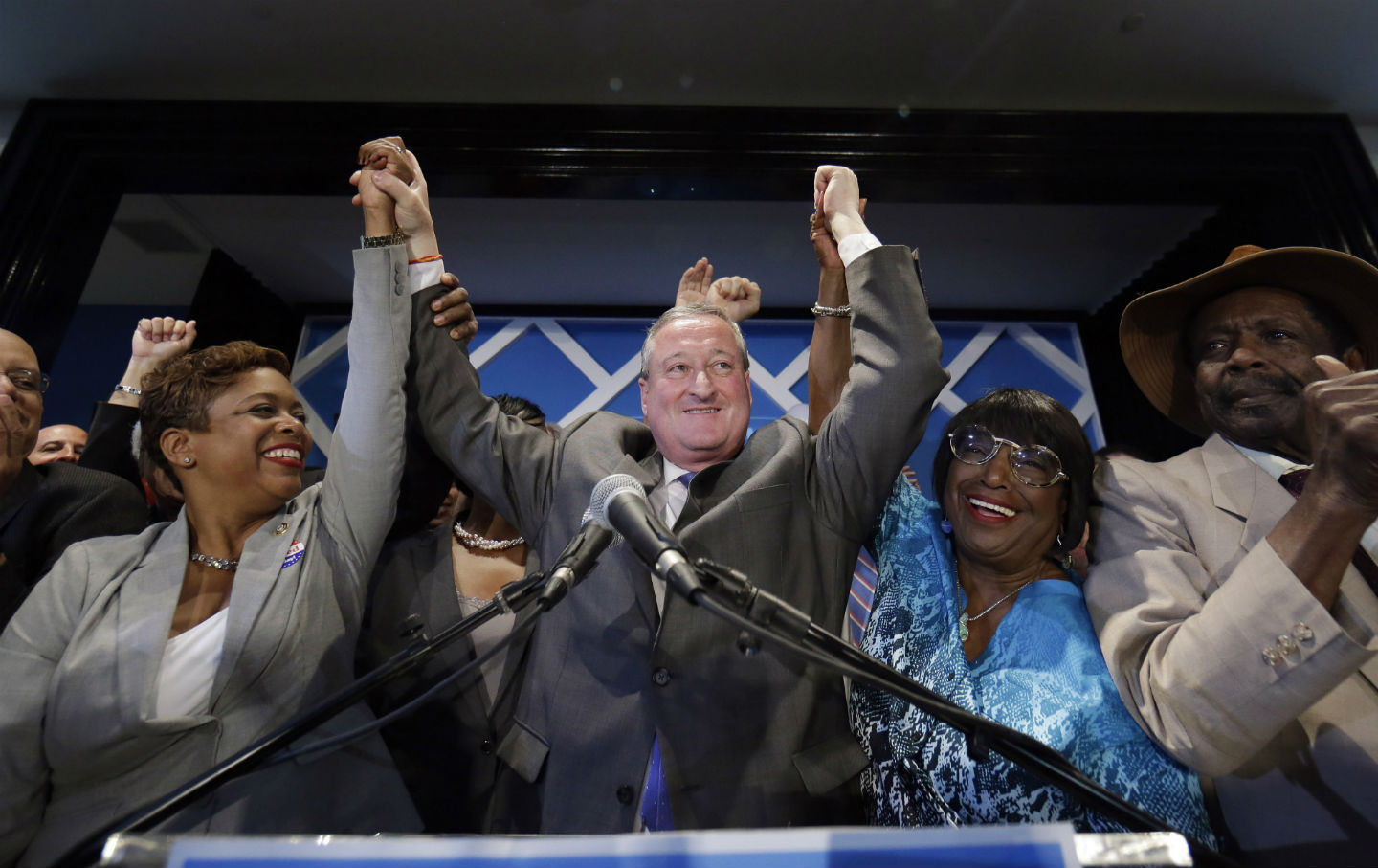 The billionaires who play politics with America make some of their biggest plays in some of our biggest cities. They identify candidates who share their penchant for “school choice” schemes, vouchers, and privatization—like Chicago Mayor Rahm Emanuel—and they pour money into slick TV ads that sometimes tip the balance of urban elections.

Sometime, but not always. Bill de Blasio was elected mayor of New York in 2013 as a progressive, as were Marty Walsh in Boston and Betsy Hodges in Minneapolis. Newark Mayor Ras Baraka scored a breakthrough victory in 2014 as the candidate of a coalition of union activists and public-education advocates. Jesus “Chuy” Garcia forced a runoff against Emanuel in Chicago this year and took a solid 44 percent of the vote on April 7. Then, on Tuesday, the guy the Philadelphia Daily News called “Jimmy from the block” beat the big spenders to become the Democratic nominee for mayor of America’s fifth-largest city.

Jim Kenney, a 56-year-old Irish-American pol from South Philly whom few expected to see making a serious bid for the city’s top job this year, won an epic landslide victory and is now the favorite to lead the city after next November’s election. If that happens, Kenney will lead from the left, as a progressive who Pennsylvania Working Families Executive Director Kati Sipp says “ran on a platform of supporting Philly public schools, raising the minimum wage, and ending stop-and-frisk.”

“This election shows that a candidate propped up by big money can be beaten out by a candidate who stands for true progressive values,” explained Sipp.

That’s right. But there is a little more to it.

Kenney did not make a timely embrace of the big-tent progressive politics that is suddenly in vogue—at least among Democrats—as America struggles to focus on issues of racial and economic injustice, environmental crisis, wage stagnation, and income inequality. He practiced it, for decades. When unions went on strike, “Jimmy-from-the-block” showed up with his picket sign—telling folks about how he “washed dishes after school as a member of Local 274” and earned his first union card at 17. When concerns arose about racial and ethnic divisions, he showed up for community meetings and established alliances with African-America, Asian-American, and Latino activists. When he saw discrimination against gays and lesbians, he championed a groundbreaking LGBTQ Equality Bill. When kids were getting busted, facing the threat of criminal records and even jail time for minor offenses, he worked to decriminalize marijuana. When neighborhoods were getting socked by corporate polluters, he helped set up a City Council Environmental Committee to put clean air, clean water, and solar power on the agenda in City Hall.

Kenney toyed with a mayoral bid. But it didn’t look likely even as the campaign was getting started.

State Senator Anthony Williams was the early front-runner, and he seemed to have all the advantages in a multi-candidate field that included a former district attorney, a former city solicitor, a former legislator, and a corporate executive. Williams was a powerful legislative leader and former gubernatorial candidate; he had a lot of the right connections in city and state government; and he was closely aligned with a group of billionaires who, The Philadelphia Inquirer noted, “share Williams’ views”—especially on “expanding charter schools, and using tax dollars to pay for private-school tuition vouchers.”

In January, as labor and community groups sought to identify a progressive alternative to Williams, they turned to Kenney. It was an audacious notion: that “Jimmy-from-the-block” might beat the political and economic power that was arrayed to seize City Hall. But he gave up his council seat and started running.

What made the run work was not just Kenney’s stands on the issues. It was memory. Folks remembered when “Jimmy-from-the-block” had been there for them. When Pennsylvania Association of Staff Nurses and Allied Professionals President Patty Eakin announced the union’s endorsement, she recalled that “Jim Kenney stood by us in 2010 when we had to strike at Temple University Hospital in order to protect our right to advocate on behalf of our patients.” The nurses were out knocking doors for Kenney on their breaks, as were the teachers, whose union, the Philadelphia Federation of Teachers, noted that “Kenney’s views on public education and other issues faced by working families made him the clear choice of Philadelphia’s educators.” On Earth Day, the city’s major environmental groups backed the candidate who promised to make Philadelphia “the greenest city in America.” And, despite suggestions from pundits that a white councilman could not hope to secure substantial support in a race with a prominent African-American official such as Williams, Kenney started winning endorsements from African-American legislators and council members who celebrated his opposition to stop-and-frisk policing and public education. “I know what’s in Jim’s heart,” declared Councilwoman Marian Tasco. “He sat next to me in city council for 23 years…”

As a labor- and community-backed, multi-racial coalition came together for Kenney, and as he began to surge in the polls, the billionaires doubled down. “One group, American Cities, raised $6.8 million as of May 4 to support state Sen. Anthony H. Williams for mayor, with 97 percent coming from three guys on the Main Line who founded a stock trading firm,” reported the Inquirer.

That was roughly five times what the Kenney campaign raised. In fact, as Philadelphia magazine explained a week before the election, “the amount of the money that American Cities still had left in the bank Monday is more than any of the individual mayoral candidates raised since Jan. 1st. Or here’s another way to think about it: American Cities raised more money this year than all of the six Democratic mayoral candidates combined.”

But Jim Kenney still had those nurses and teachers and gay rights activists and environmental advocates and Councilwoman Tasco, and they were still knocking on doors—still arguing that cities should be on the side of workers and neighborhoods and civil rights and public education.

When the votes were counted Tuesday night, that message—not the one in the ads paid for by the billionaires—prevailed.

Jim Kenney won by a 2-1 margin over Williams, with four other candidates trailing far behind. Kenney took 58 percent of the overall vote and swept to victories in more than 50 of the city’s 66 wards.

Former Philadelphia city solicitor Ken Trujillo, a progressive favorite who stepped out of the race early on and backed Kenney, said that, while some candidates might project a sense of political entitlement, “Jim, from the beginning, had a humility about his candidacy. He never acted like he was entitled to it.”

“It’s a great hodgepodge,” State Representative Brian Sims, Pennsylvania’s first openly gay elected legislator announced. “We wanted somebody who knew all of us and had worked with all of us.”

Up on the stage, Jim Kenney waved a clenched fist of solidarity to the cheering crowds and proceeded to thank the unions and the activists and elected officials, one by one, name after name, for sticking with him. They had proven something about politics, not just in Philadelphia but in America.

Sometimes, great piles of money are not enough.

Sometimes, “Jimmy from the block” beats the billionaires.

MLB, NBA and NHL Games Are Canceled in the Twin Cities