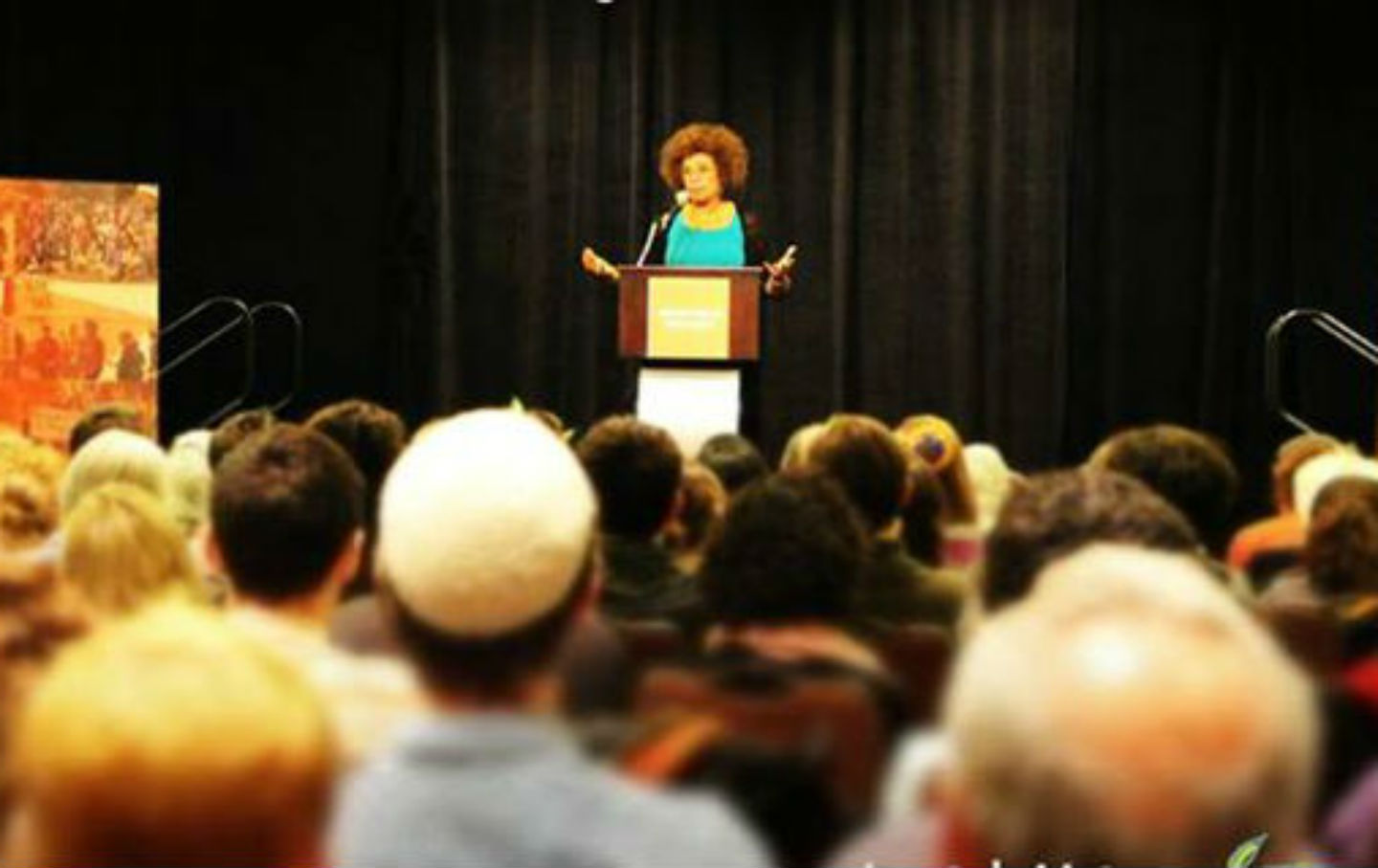 The victory of Benjamin Netanyahu and the extreme right in the Israeli elections sorely disappointed those who had pinned their hopes on the Labor-led Zionist Camp so they could resume the peace process.

The Palestine Liberation Organization (PLO), the Obama administration and the European Union (EU) now have to face the fact that the Palestinians have no partner for peace. They will have to take actions they had hoped to avoid and ramp up outside pressure on Israel to reach a just and lasting agreement.

Yet Israel and the occupied Palestinian territory are not the only battleground where the future of Palestinians and Israelis is being decided. The United States is also an important sphere. And, coincidentally, two major—and very different—American Jewish conferences bookended the Israeli elections. The Jewish Voice for Peace (JVP) National Membership Meeting was held in Baltimore from March 13 to 15, and the J Street National Conference is being held this week in Washington, DC, from March 21 to 24.

J Street is the larger and better-funded organization, but JVP is proving to be a real magnet for American Jews who are outraged by Israel’s policies and even more by Netanyahu’s claim to be speaking in their name, and who want to take action, including boycotts. JVP’s roughly 204,000 Facebook “likes” are more than seven times that of J Street’s, and its 41,800 Twitter followers are well over three times those of J Street’s.

J Street, does not support the Palestinian-led Boycott, Divestment and Sanctions (BDS) movement, defining itself as “pro-Israel, pro-peace” and as part of the American Jewish establishment. JVP, which has supported BDS for years, issued a statement earlier this year fully endorsing the BDS call. It positions itself as pro-justice and universal human rights and says the mainstream Jewish community does not speak for it.

Despite, indeed because, of these out-of-the-box positions, JVP is growing fast. In recent months, the number of chapters across the United States increased from forty-one to seventy-two; the number of members has shot up to 9,000, and online supporters have nearly hit the 200,000 mark. Significantly, much of this growth happened after Israel’s “Operation Protective Edge” against the besieged Gaza Strip in the summer of 2014, pushing thousands off the fence of inaction.

JVP’S burgeoning energy and maturity drew hundreds to its conference, which sold out at 600 participants six weeks early; nearly 200 additional video passes were also issued. The theme of the weekend was “We’re Not Waiting,” and participants came from as far as England and California to compare notes, strategize, mourn the lives lost over the summer and celebrate their growing strength. There was a striking number of young people as well as grandparents, long-time activists and newcomers to the cause. And this year, this Palestinian went to the conference, too.

Why would a Palestinian even want to participate in an American Jewish conference? For one thing, JVP is a key player in what is now a fast-growing US movement for Palestinian human rights and equality between Palestinians and Israelis. As a co-founder of another key player—the US Campaign to End the Israeli Occupation (though no longer directly engaged in its work)—I can sense that this movement has come of age.

Within the last generation, several major national organizations have grown out of the efforts of handfuls of volunteers working out of people’s homes, their personal resources stretched to the limit. These organizations are now managing real money and staff out of offices based in DC and all over the US. More important, they are now collaborating effectively both within the movement and across other movements.

For example, several organizations—JVP, the US Campaign, Code Pink, American Muslims for Palestine and others—pooled efforts around the #SkipTheSpeech drive to convince Members of Congress to turn their backs on Netanyahu’s meddlesome foray into US foreign policy. This generated more than a hundred thousand letters, calls and visits, and helped encourage the nearly sixty members who ended up skipping the speech, emboldening them to be critical.

Another example is the way groups in the movement for Palestinian rights are also deeply engaged in the #BlackLivesMatter movement and related campaigns for the rights of individuals and communities violated right here at home.

The mix and vitality of the movement was reflected in the mix of speakers at the JVP national meeting: legendary activist Angela Davis, Rabbi Brant Rosen, feminist and anti-violence crusader Andrea Smith and Dream Defender Ahmad Abuznaid, among others. The vast majority of participants were Jews, but, ironically, almost the first people I met at the conference were three other Palestinians, including one who had trekked in from California. “We wanted to be here,” they told me, “to speak about the work we’re doing and to learn from others.”

JVP has always invited Palestinian voices to speak on its panels; indeed, I spoke at its 2011 conference. But there had been few other Palestinians then; now there were many, alongside participants from several Christian denominations and representatives of other national organizations. JVP provided a safe and embracing space for all those present, allowing the most difficult discussions to take place with heat but without rancor, including around anti-Zionism and anti-Semitism.

Beyond taking the pulse of the movement, it was important to be at the JVP conference in order to gain insights into the changing discourse around Israel-Palestine in America. In a sense, the Israel-Palestine battleground in the United States is all about shaping the discourse. How are Palestinian rights defined these days? What are the goals of the movement? How and in what form can/will Jews and Palestinians live together? When does joint Palestinian-Jewish activism tip over into normalization of the brutal status quo?

National and local grassroots organizations have been engaged in changing the discourse for years, alongside professional media organizations such as the redoubtable Institute for Middle East Understanding. And the BDS campaigns that so many groups are now working on do help to provide some of the answers. But much of the discourse still needs framing. Moreover, there has been a tendency to see BDS as a goal in itself, overlooking the fact that the Palestinian civil society call for BDS specifically spells out the goals as the achievement of freedom from occupation, justice for the Palestinian refugees and equality for the Palestinian citizens of Israel.

JVP is among the groups pushing back against this conflation. It is vital for the larger movement that Jewish voices consistently reaffirm that criticism of Israel’s occupation and denial of rights to generations of Palestinians is not anti-Semitic; it is a stand against policies and practices that are just plain wrong.

But JVP is also joining other groups in pushing the boundaries of the discourse, in imagining how to resolve the conflict and shape a different future. As a Palestinian, I never imagined I would witness such a thoughtful—and brave—discussion of the Palestinian right of return in a public American space, let alone an American Jewish space. But here it was. Liat Rosenberg of Zochrot (“Remembering”) and Basem Sbaih of Badil (“Alternative”) were invited to keynote a plenary titled “Reclaiming the Past in Order to Realize the Future” that was moderated by Marilyn Kleinberg Neimark, an emeritus professor at New York’s Baruch College and a longtime activist.

One of my fondest memories of the conference was when Rosenberg pointed out how much land would be available for returning Palestinian refugees given that most Israeli Jews are still concentrated around the Tel Aviv area. “Oh, a land without a people,” was Neimark’s riposte, quick as a flash.

So many players in the American Jewish establishment have for decades deployed their skills and energies in the service of Israel’s illegal colonial enterprise. And here, at this conference, were a multitude of Jews, at their most savvy and strategic, working in favor of Palestinian rights and equality for all.

The last person I saw at the conference was a freshly minted attorney, a thoughtful young Muslim American woman of South Asian heritage who had also flown in from California. “Why did you want to be here?” I wondered. “We need to show JVP that they have allies,” was her moving response. “It’s a lonely battle.”

Yes it has been. But not any more.