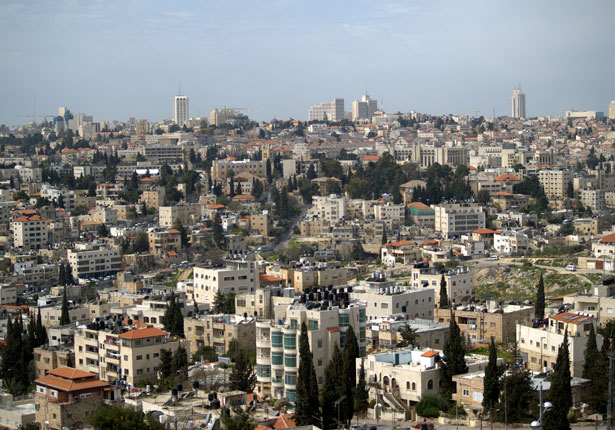 A view of the Sheikh Jarrah/Shimon HaTzadik neighborhood in East Jerusalem (photo courtesy of David Shankbone at Wikimedia, CC 3.0)

Jerusalem is once again exploding into the headlines with scenes of strife and suppression. Several conflicts have exacerbated tensions across the city in recent months and ignited clashes with security forces: the shooting of a right-wing Jewish activist, perennial conflicts over the Al Aqsa mosque, and more ruthless bulldozing of Palestinian homes. The scenes of unrest, the hails of rubber bullets and hundreds of arrests have sadly become part of the violent rhythms of everyday life in this Holy City.

Yet behind the latests spasms of violence is a slow-burning crisis that has been imposed over generations, as a new report on East Jerusalem’s topography of inequality makes clear. Separated from the rest of the Holy City, the majority-Arab East Jerusalem simmers with poverty and social unrest.

The report, published by the independent labor group WAC-Maan, describes East Jerusalem as a “socioeconomic disaster,” in which chronic poverty is not just ignored, but promoted by two Israeli welfare institutions, the National Insurance Institute (NII) and the Employment Bureau (EB). These welfare agencies are tasked with delivering public assistance to all Jerusalemites. But for Palestinian communities, advocates say the bureaucracies act as gatekeepers to social entitlements, under “a government policy to push Palestinians beyond the wall” and, paraphrasing the government’s messaging, “strengthening Israeli sovereignty in the territories of East Jerusalem.”

Under a program to “develop” East Jerusalem, WAC-Maan says the real mission is not social service delivery but a systematic impoverishment, and ultimately cleansing, of local Palestinian enclaves, which then invites takeovers by Jewish residents. Meanwhile, WAC-Maan argues that the funding behind the “development” provisions is so small that “it cannot achieve any real change beyond showcasing Israeli sovereignty.”

In a microcosm of the war-torn landscape of the Occupied Territories, East Jerusalem is blockaded by a Separation Barrier. On the side of the annexed territories outside the Barrier, according to WAC-Maan, households are cut off from public services. On the other side, within the main area of East Jerusalem, there has been haphazard construction and “development,” but the net effect on poor Arab residents has been to keep the community divided. In addition to extremely high poverty, access to utilities is heavily constrained in neighborhoods outside the barrier, where residents report “extremely low water pressure or even no water at all for days at a stretch.”

Joblessness is epidemic. In 2011, just 37 percent of local Palestinians participated in the workforce, about six in ten men and just 14 percent of women.

WAC-Maan organizer Erez Wagner tells The Nation that since the protests have erupted in recent weeks, the whole community has been destabilized. As Arab residents face a phalanx of security patrols on the streets, “it’s a very explosive situation.” But beyond the street protests, even for those just trying to work, “because of the unrest, we saw a lot of employers don’t want the Arab workers.”

The report accuses the NII and EB of systematically denying Arab Palestinian residents access to entitled social services and benefits. According to the report, Palestinian Jerusalemites applying for benefits “often… discover that the functionaries in the Interior Ministry and the NII cast doubts on their residency” when vetting their documents. This can lead to “the cancelling of welfare, health services, and NII benefits, and can end with a prohibition against living in Israel, including East Jerusalem.”

WAC-Maan charges that in some instances, Arab job seekers are sent on “fictitious” job referrals—places where there are no open positions. This can jeopardize their unemployment eligibility, since they cannot demonstrate that a company actually rejected their job application, and the Employment Bureau can deceptively “claim that the claimant refused work” and thus suspend their benefits.

According to WAC-Maan, even the “developing” parts of Jerusalem are suffering because of reckless construction. Since the municipal government “maintains no supervision whatsoever over construction,” WAC-Maan argues, speculators have been able to “exploit the housing shortage that persists in the main part of East Jerusalem… in order to build high-rises, sometimes reaching 14 stories, without supervision and without the necessary infrastructure. These buildings can easily become death traps in fire or earthquake.”

From a historical perspective, the marginalization of the city’s Palestinian neighborhoods has been ongoing since the de facto annexation in 1967, which led to decades of programmatic economic isolation and housing segregation. And while recent waves of unrest in Jerusalem are deeply intertwined with conflicts in Gaza and the West Bank, the patterns of social marginalization outlined in WAC-Maan’s report have been intensified by a recent “development” initiative that threatens to accelerate mass displacement. The municipality’s recently announced five-year economic plan purports to boost national security by “unifying” the city. But earlier this year, Haaretz reported that the plan appears to be designed to facilitate annexation of Arab communities and “thwarting any possibility that the city would be divided as part of a future accord.”

The NII has not directly responded to WAC-Maan’s allegations of misconduct. But the NII’s Head of Research and Planning, Daniel Gottlieb, stated in an e-mail to The Nation that poverty was a major issue in East Jerusalem and that prior to 2011, “the government did not sufficiently succeed in reducing poverty.” Though his department is focused on research and analysis, he noted the government had undertaken some relief measures, such as a supplementary tax credit.

Gottlieb also expressed that according to NII General Counsel Amos Rosenzweig, “NII does go an extra mile towards the Arab residents of East Jerusalem to grant them social security rights despite the fact that Israeli law would not apply to them,” and that these residents are exceptions because “the legislation of social security applies only to residents who geographically reside inside the borders of Israel.”

But Wagner counters that Arab residents in annexed areas “hold an Israeli ID and are entitled by law to all social security benefits,” but remain segregated because “the separation wall isolates those neighborhoods.” Regarding the municipality’s supposed “extra mile,” Wagner adds, “This response reflects the shirking away of NII from its obligations toward the residents of the neighborhoods in East Jerusalem.”

The Jerusalem that flashes in the news headlines seems tragically chaotic, but there is a method to the madness. It is not just security patrols or checkpoints that back the city’s Arab residents into a corner: the government’s regime of economic marginalization is one of the most forceful weapons against Palestinian communities—a separation wall that is not just physical, but social, ingrained in the everyday mechanics of life under siege.