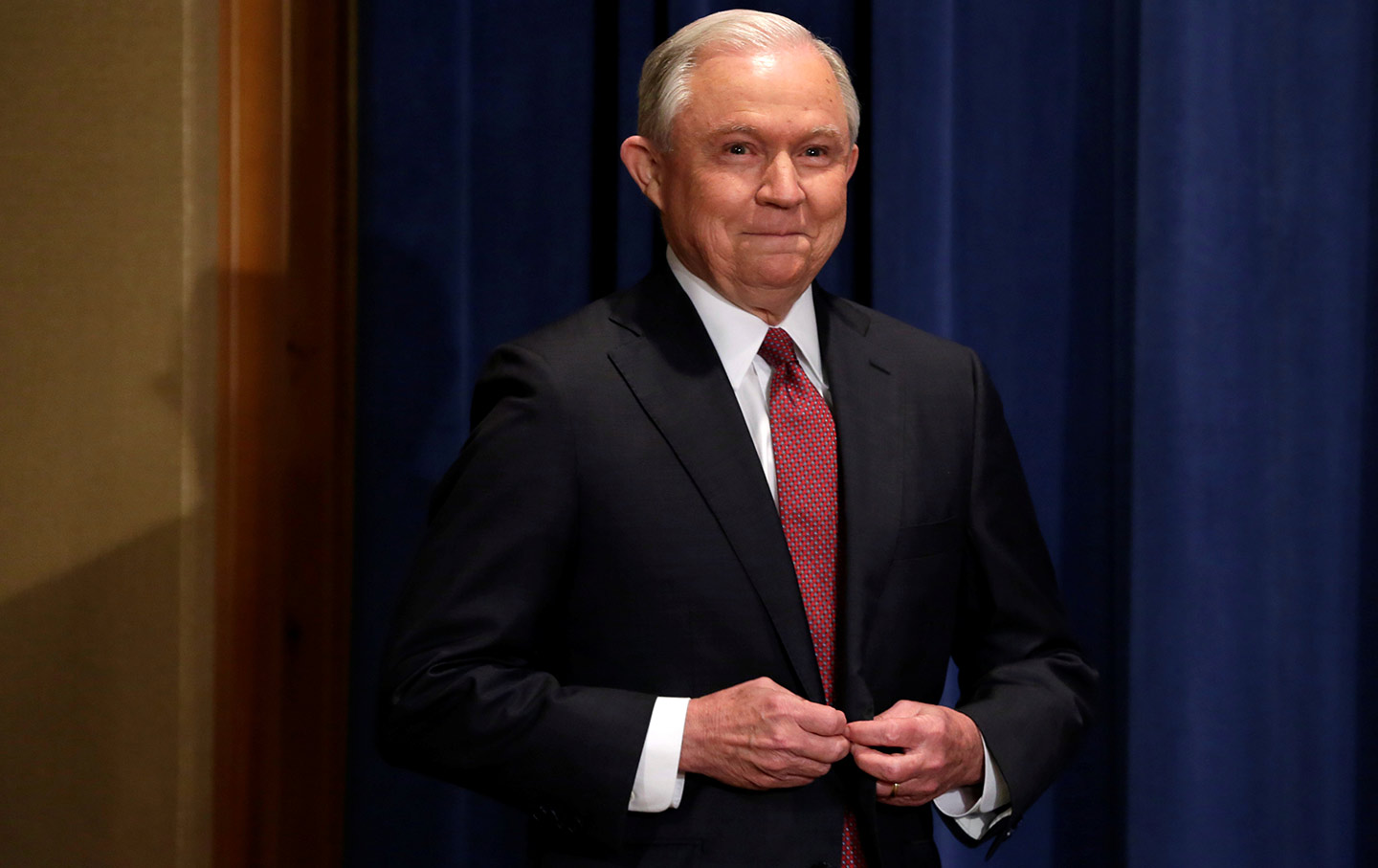 “We are people of compassion—and we are people of laws,” Attorney General Jeff Sessions declared Tuesday morning, with a bizarre and inappropriate smirk. Sessions twitched that nervous smirk multiple times as he announced President Trump’s decision to “rescind” President Obama’s Deferred Action for Childhood Arrivals 2012 executive order. That was the tell: Trump’s DACA rescission is a sop to his white-nativist base, and it represents the pinnacle of Sessions’s otherwise undistinguished political career. Trump sent out his battered political spouse, the man he repeatedly suggested ought to resign, to take a victory lap on Tuesday, and Sessions couldn’t hide his joy.

But it was also a move that Trump was unwilling to announce himself. Which is odd, given that it was such a big promise to his base during the 2016 campaign. Instead of basking in the glory of a rare moment—Trump hasn’t been able to keep many campaign promises so far, not repealing and replacing Obamacare, not building his wall on the border with Mexico, not tax reform—the cowardly Trump sent out his attorney general. Despite it being his magic moment, Sessions also behaved in a cowardly fashion, fleeing reporters’ questions after his relatively brief announcement, which was studded with legal errors that would shame a better attorney general (or any better person, actually). With apparent reluctance, Sessions wound down his remarks by acknowledging that the federal government will allow time to “conduct an orderly change, to create a time period for Congress to act, if they so choose.” 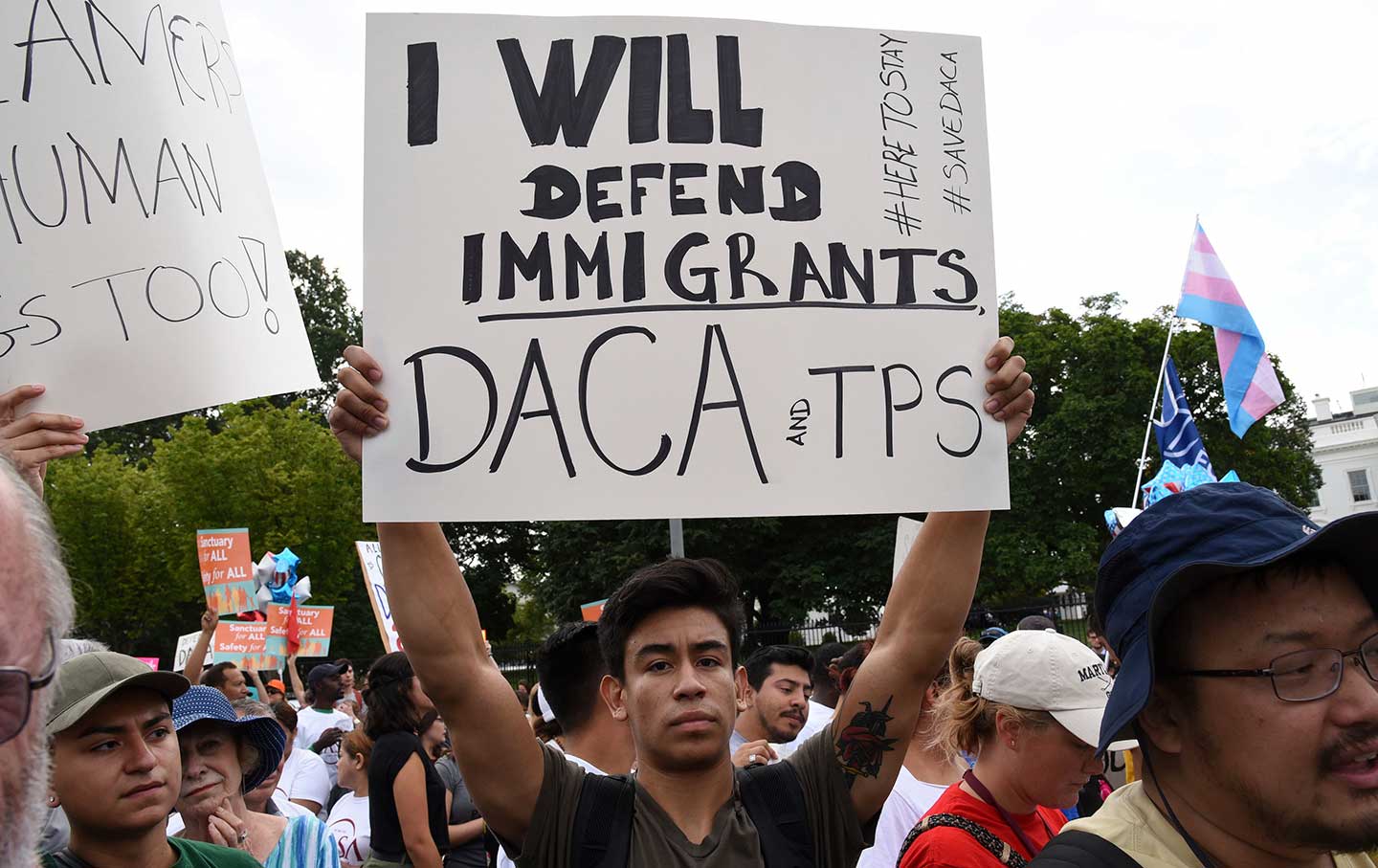 We Need Everyone to Act Now to Fight for DACA

If they so choose. But they almost certainly will not.

Apparently, Trump thinks it’s a win-win to punt to Congress: He gets credit from his base for ending DACA, while he shifts the blame for ruining the lives of 800,000 by-definition law-abiding Americans to his congressional “allies.” Will it work? Only if the media continue to portray Trump as being “sympathetic to the plight of the young immigrants,” as though he is genuinely sympathetic to anyone but himself, and a few, but not all, of his family members.

Sessions used no dog whistles; he brought his bullhorn, making a series of incorrect and/or dishonest claims in his 10-minute remarks. He repeatedly used the deplorable term “illegal aliens.” He insisted DACA “denied jobs to hundreds of thousands of Americans by allowing those same jobs to go to illegal aliens,” the core of white-nativist complaints about any new legal status for undocumented individuals. He insisted DACA was “unconstitutional,” which is widely contested. He said its beneficiaries were “mostly adult”; they may be now, but they had to be brought here before 2007, when they were under 16. He claimed they were a drain on the economy; they bolster it: 95 percent either hold jobs or are in school. DACA, Sessions said, “has put our nation at risk of crime, violence and even terrorism;” of course recipients can have no criminal record, and if they commit a crime, they have to leave.

It’s true that DACA was facing legal challenge from red-state attorneys general, led by right-wing Texas AG Ken Paxton. Those challenges might have prevailed, at least temporarily. But Sessions made it known he would not defend the order against his red-state brothers, and so Trump sent him out to announce the rescission, while also allowing a six-month window for those legislative masters, House Speaker Paul Ryan and Senate majority leader Mitch McConnell to come up with some semblance of a humane alternative.

That may be possible—if moderate Republicans, along with those from increasingly Latino districts, were willing to team up with Democrats, there would likely be the votes for an alternative to expelling more than 800,000 DREAMers from our shores. But that was also true of the bipartisan comprehensive immigration-reform bill passed by the Senate in 2013; had the House GOP leadership put the bill on the floor, it almost certainly would have passed. Who expects Paul Ryan to have that kind of courage?

Maybe some of the Beltway pundits who’ve mislabeled Ryan a policy wonk and a legislative master. But nobody who’s watched Ryan can expect leadership here. In the last 24 hours, he’s come out against Trump’s planned DACA rescission while also defending it, saying it “fulfills a promise” to Trump’s base. Meanwhile, Representative Steve King, who years ago boasted that his racist anti-immigrant stance was mainstream in his party, is furious that Trump gave an extra six months to allow supporters of “amnesty” to come up with an alternative to mass deportation. And the head of Trump’s election-fraud commission, Kansas Secretary of State Kris Kobach, told Fox and Friends on Tuesday that “there’s nothing wrong with asking people to go home” now, and suggested that if such a move splits up families, the relatives of DACA recipients who have legal status should volunteer to return home with their undocumented family members. That’s Kobach’s idea of “family unification.” He still runs Trump’s commission, of course.

So I’m not optimistic that the Republican Congress will do the right thing and legalize the DREAMers. If Congress doesn’t act, roughly 275,000 DACA recipients—soldiers, teachers, fathers, paramedics, students—will lose legal status on by March 5, 2018. That would make for a colorful backdrop to the midterm elections. It’s even possible that Trump will extend his DACA deadline again, if the prevailing political winds suggest that’s a smart move. All we know, today, is that Jeff Sessions had a good morning, and Trump is happy to dump the fate of almost a million young people into the laps of his supposed congressional allies. This will be ugly.