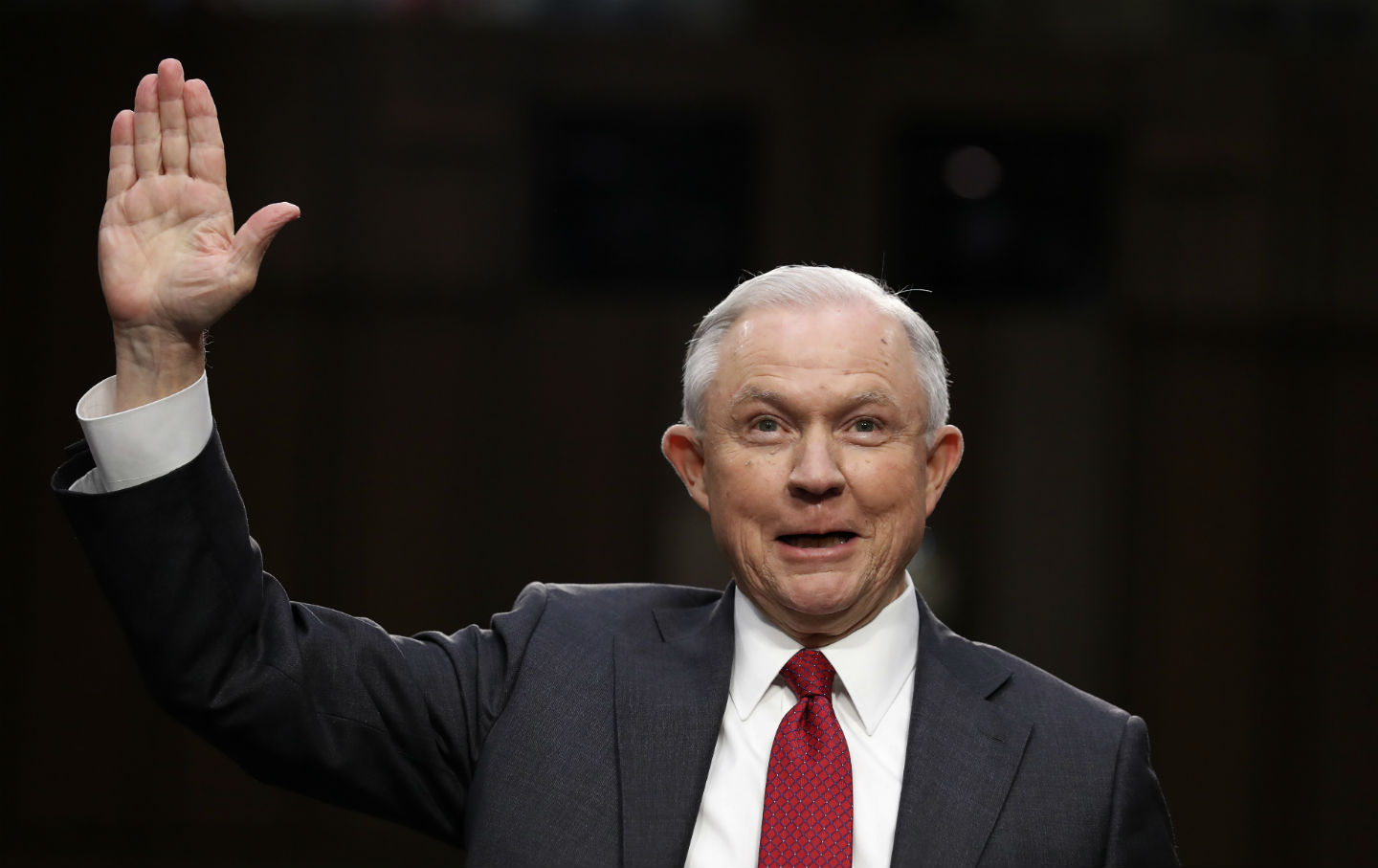 Attorney General Jefferson Beauregard Sessions opened his Senate Intelligence Committee defiantly: “I did not recuse myself from defending my honor against scurrilous and false allegations,” he told the bipartisan panel investigating whether the Trump campaign colluded with Russian officials who hacked the election on his behalf—and perhaps whether Sessions himself played a role. The longtime Alabama senator now finds himself in the probe’s undertow.

After that, he was alternately bold, obsequious, weaselly and feeble. Sessions ducked key questions and said “I don’t recall” more than anyone could count in the dramatic hearing Tuesday afternoon. In the wake of fired FBI director James Comey’s revelations last week, Sessions found himself in high demand to answer questions Comey’s testimony raised about his former boss—especially about whether he’d had undisclosed meetings with Russian officials and about why he fired Comey though he’d recused himself from Comey’s Russia investigation. But senators found him much less forthcoming than Comey had been the week before.

Sessions repeatedly invoked a mysterious Justice Department policy that allowed him not to answer questions about his conversations with Donald Trump, on the grounds that Trump deserved “confidentiality” in his dealings with his staff and cabinet members. But if the president wanted that, he’d have had to claim executive privilege, and he did not. Senator Kamala Harris, among others, tried to get Sessions to name the policy, and to say whether it existed in writing—and he couldn’t. He turned to calling it a “principle.” Legal experts I talked to were mystified by Sessions’s claim. On MSNBC, attorney Paul Butler declared: “I was at the Justice Department, I never heard of it.” It could be a dodge that allows Trump to claim executive privilege later—but even that claim can be challenged.

It was a little disappointing that none of the senators ever came out and clarified the law. Sometimes, especially during the Republicans’ questioning, it was like they were humoring the occasionally dotty-seeming Sessions that his six-foot rabbit Harvey was sitting right next to him at the hearing table. After the hearing though, Senator Jack Reed and others promised that if they could find no actual Justice Department policy letting Sessions duck their questions about his conversations with Trump, they’d make him answer them in writing. (Reed also shined when he rubbed Sessions’s nose in his campaign trail praise for Comey’s investigation into Hillary Clinton’s e-mail handling. Sessions almost looked ashamed.)

Despite his bobbing and weaving, we learned a few intriguing new details. Sessions did not dispute that he’d attended a third meeting at the Mayflower Hotel with Russian ambassador Sergey Kislyak in April 2016, having said he’d only met him twice (after first saying never). He merely said, repeatedly, that he couldn’t “recall” meeting Kislyak, and insisted the reception they reportedly attended had three dozen people. Bizarrely, Sessions told the committee that he decided to recuse himself from the Russia investigation on February 10, the day after he began as attorney general, upon reading ethics guidelines relating to his role in the Trump campaign. Yet he failed to actually recuse himself until March 2—right after the Washington Post revealed that he’d met with Kislyak at least twice, and Senators Al Franken and Pat Leahy began asking whether he’d committed perjury.

Ranking committee member Senator Mark Warner asked whether, given he’d made a harsh appraisal of Comey’s performance, “you didn’t feel you should talk to him before his firing.” He didn’t, Sessions said. Even some Republicans left marks on Sessions, with Senators Mark Rubio and John McCain asking Sessions if he’d met with any “Russian businessmen,” an interesting line of questioning given that the investigation is believed to encompass Trump and Friends’ business deals. Conservative Idaho Senator Jim Risch even tripped Sessions up when he was trying to help. “You’d have headed for the exit [if you saw Trump campaign collusion with Russians], right?” he asked, expecting a simple “yes.” Instead, Sessions strangely answered, “Maybe.”

And though he wasn’t there, Senator Al Franken, who caught Sessions wrongly denying his contacts with Kislyak, lurks in his head. Irritably, he said Franken asked him a “rambling question after six hours of testimony” about “dramatic new information” reporting that Trump surrogates had dealings with Russian officials, and flustered, he just failed to remember his. He also called Senator Joe Manchin “Senator Franken” at one point, quickly correcting himself. It made one hope Sessions is in fact called before the Senate Judiciary Committee for questioning, as Franken, Leahy, and ranking Senator Dianne Feinstein are asking.

But time and again, Democratic senators asked about conversations with Trump—What had Trump said about his reasons for firing Comey? Had he ever discussed pardons with the president? And Sessions refused to answer. New Mexico Senator Martin Heinrich told Sessions he only had three options: “You either answer the question, say you can’t because it’s classified, or you claim executive privilege.” When Sessions still refused to answer, Heinrich got testy. “You are impeding this investigation,” he told Sessions. “You are obstructing this congressional investigation by not answering questions.”

Unbelievably, once again her male colleagues rebuked Senator Kamala Harris. What is wrong with these people?

Senator Kamala Harris took a similar tack, trying to drill down on Sessions’ “confidentiality” defense. But where her male colleagues on both sides of the aisle proceeded unimpeded, unbelievably once again Harris was rebuked—not only by committee chair Burr but ex-officio member Senator John McCain. Sessions seemed unusually rattled by the California senator’s questions. “I don’t like to be rushed this fast, it makes me nervous,” he told her, and finally McCain interrupted her and Burr instructed her to let the witness answer—just as he did when she was being stonewalled by Adm. Mike Rogers last week. It was an awful moment.

His Republican friends couldn’t keep Sessions from looking feeble, overmatched, and underqualified to be attorney general, whatever his ethical conflicts. In the end, McCain didn’t help him much either, even after calling Harris off. He asked his fellow Senate Armed Services Committee member (Sessions was widely known as a lightweight there) about his now-disclosed Senate office conversation with Kislyak. Did they discuss Russia’s annexation of Crimea? Yes, Sessions was able to report. Things got worse from there.

Had he asked about Syria? “No,” he confessed.

Russian hacking? By now he was getting a little embarrassed. “No,” he confessed.

Amazingly, more than once Sessions had to tell the committee that no, he had never once asked to be briefed on the intelligence community’s evidence that Russia interfered with the 2016 election. “You might have been very critical of me if I had,” he told Maine Senator Angus King, given his recusal from the investigation. “I’m not talking about the campaign,” King replied, “but about the attack.”

“No I don’t think so,” Sessions answered, almost sheepishly.

Of course, Comey told the committee the same thing about Trump: The president never once, while Comey worked for the FBI, anyway, asked for details about the Russian operation he likes to call “a hoax,” “fake news” and possibly the work of the Chinese “or a 400-pound kid.” Sessions and Trump are made for each other, and we can only hope they’ll go down together. But it’s likely to take a long time, given most Republicans’ lack of interest in questions of either incompetence or corruption.