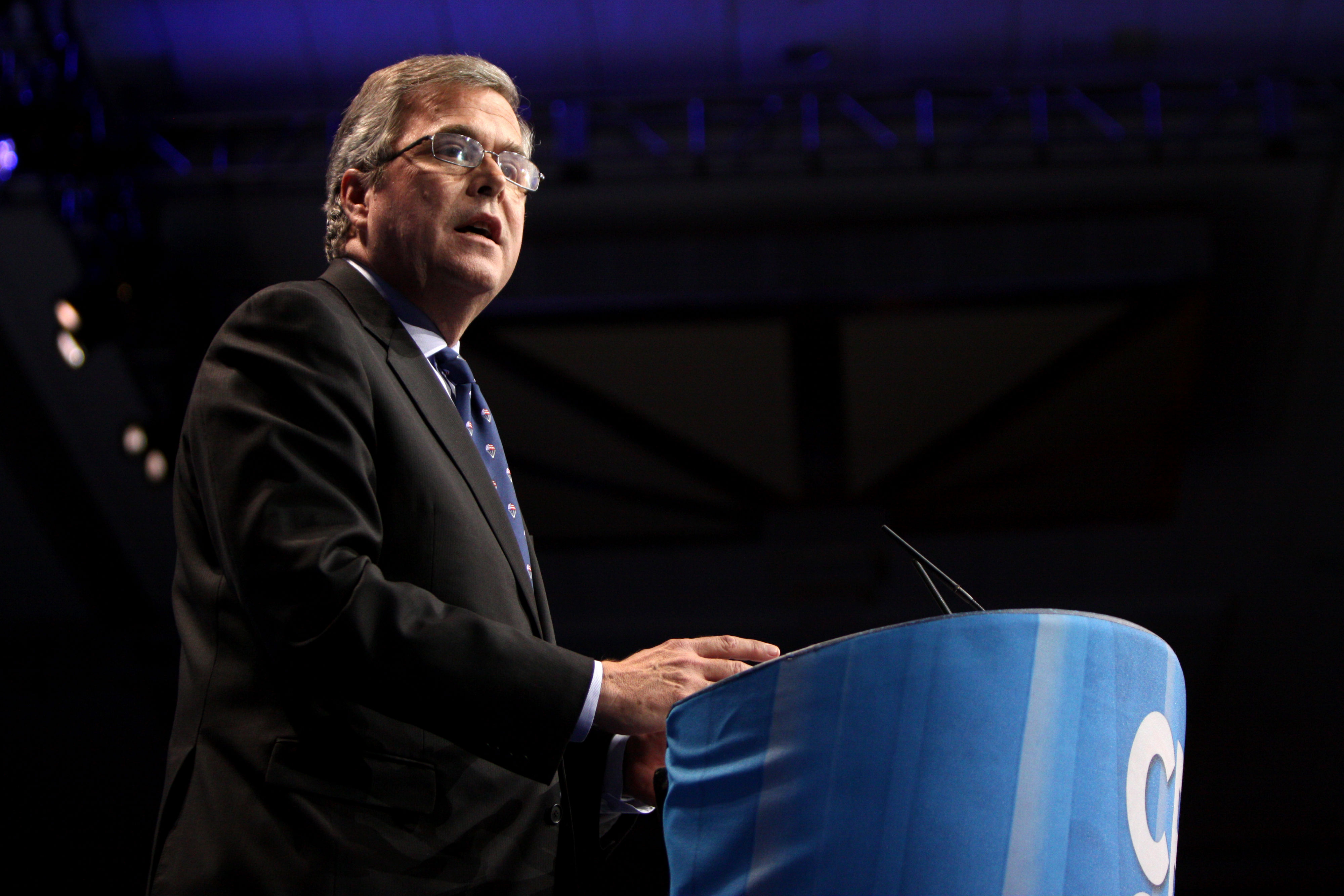 Despite the defeat of Eric Cantor, and strong showings by Tea Party–linked Republicans in Mississippi and in Texas, it’s still true that the mainstream, conservative-establishment GOP is in control, and that’s what matters for 2016. Quirky outliers such as Rand Paul and Mike Huckabee might be able to stay in the race in 2016, and it’s entirely possible that one Tea Party type could hang on to the convention with a passel of delegates, but it’s still true that the Republicans are going to nominate someone from its establishment, Wall Street– and US Chamber of Commerce–backed wing—that if it’s not Jeb Bush or Chris Christie, then it’ll be someone of that ilk.

Today, we’ll review the bidding again on Jeb Bush. Ever since Christie ran into his current Bridgegate fiasco, there’s been a boomlet of speculation that Jeb, W.’s younger, smarter brother, might make a run. With Cantor’s defeat, some conservative analysts are making the argument that because Bush has challenged the far right with his support for immigration reform and Common Core education standards, he can’t win the nomination. But that’s nonsense. Perhaps the Tea Party can make noise in southern Virginia, the Deep South and the Lone Star State’s raucous, Ted Cruz–dominated politics, but in delegate-rich states in the Midwest such as Pennsylvania, Ohio, Michigan and Illinois, not to mention New York and California, the GOP establishment has the upper hand—as it has demonstrated all year long, defeating a long list of Tea Party acolytes in favor of traditional GOP conservatives. As a Bloomberg writer pointed out in the Miami Herald, Bush “would be the spokesman for sane conservatism.” Now, liberals and others on the left might argue otherwise—namely, that Bush, Christie and other would-be standard-bearers would set up a White House that would empower that very worst of a GOP-controlled Congress’s extremism, and that they themselves represent a mainstream Republican party that has moved far, far to the right—but there’s still a difference between Cruz-style shut-down-the-government politics and the business-as-usual, pro-business views of low-tax, anti-regulation, cut-the-budget Republicans such as Bush and Christie.

And the big-money guys—Sheldon Adelson, hedge fund billionaires such as Paul Singer, Wall Street bankers and even the Koch brothers—are likely to line up behind one or another of the mainstream pols. (The rest of Wall Street will support Hillary Clinton.)

For Republicans, except among its pitchfork-carrying wing, the reason why Bush or Christie might be preferable is simply because they are the only ones with a prayer of defeating Clinton in a general election. That was the point in a recent poll in Iowa Poll conducted by the Des Moines Register, which concluded:

Chris Christie and Jeb Bush have the highest unfavorable ratings of 11 potential White House candidates, yet Iowa’s Republican primary voters think they would have the best chance of being elected over the Democratic candidate in November 2016.

As the Louisville Courier-Journal reported, on the same poll:

When asked which one or two candidates had the best chance of defeating the Democratic nominee, 19 percent of Iowa’s 2014 primary voters picked Christie, while 16 percent picked Bush. Paul was tied for third at 13 percent with former Arkansas Gov. Mike Huckabee.

Another poll, surveying national voters, confirmed what pollsters have been saying for a while now—as reported by Christie Watch: that Bush and Christie consistently do the best when matched against Hillary Clinton. That may be because Bush and Christie, like Clinton, have high name recognition compared to others in the GOP field. And that’s why Bush and Christie also have high negatives, Bush because of his last name and association with George W., and Christie because of Bridgegate and his well-earned reputation as a bully.

Like Christie, who’s raising millions for the Republican Governors Association, Bush is also a prodigious fundraiser. On Monday, Bush will be the featured speaker at an Ohio fundraiser for the Republican National Committee, where the Cincinnati Business Courier reported that couples “who pony up at least $32,400” will have an “opportunity to get their photo taken with Bush.”

In South Carolina, where the Senate’s uber-hawk, Senator Lindsey Graham, just won his primary against a Tea Party challenger, Bush is doing well in the polls. According to a Palmetto poll by Clemson University, Bush comes in first in the GOP field with 22 percent of poll respondents, compared to Christie’s 10 percent, second-place finish. (Perhaps that’s because in South Carolina, according to National Review, there’s ‘no Republican in South Carolina today more popular than George W. Bush.”) Over at MarketWatch, a pro-GOP, business-oriented outlet, there’s lots of optimism about Bush’s chances, partly because of the “chameleon-like” nature of the Bush family:

Whereas George H.W. Bush, the 41st president, was a Connecticut Yankee and an Episcopalian—a classic old-school WASP turned Houston oilman—his eldest son, George W. Bush, the 43rd president, was raised a Texan and became a Methodist and a baseball club owner. Now his younger brother Jeb, the putative 45th president, is a Spanish-speaking Catholic from Florida with a wife born in Mexico. As a two-term governor of one of our largest states, he has more administrative experience than Obama and the crop of potential rivals for the Republican nomination—freshmen Sens. Ted Cruz of Texas, Rand Paul of Kentucky, and Marco Rubio of Florida—put together.

In its recent cover story on the Bush dynasty-in-the-making, Newsweek said that the Tea Party’s recent struggles “shouldn’t be viewed as a diminishment of conservative fervor or a harbinger that the Tea Party is in the mood to nominate a ‘governing conservative’ like Jeb or Chris Christie.” But Newsweek seems convinced that the Bush family is sly enough to overcome obstacles and roadblocks, and the piece concludes:

A Jeb candidacy would face down a slew of other obstacles besides conservative fire-breathers and a stymied ode to joy. There are the changing demographics of the country, although Jeb, who is fluent in Spanish and married to a Mexican-born American, might have a special connection to the nation’s Latino voters.

Jeb would need to face the ultraconservatives, the Clinton dynasty and the vicissitudes of luck. But if he succeeds in negotiating those opposing forces, in less than three years from now he could be inaugurated as the 45th president of the United States, with two former presidents, his brother and father, looking on. And, oh yes, Jeb’s son, George P. Bush, is almost certain to be elected to statewide office in Texas this year. (The P. stands for Prescott, befitting a family—they loathe being called a dynasty—that churns out politicians with assembly-line efficiency but that recycles names like George and Prescott the way your compost-happy neighbor lets nothing go to waste.)

Interestingly, when Australia’s Prime Minister Tony Abbott—who, according to Al Jazeera, is “Australia’s George Bush”—visited the United States last week, he went out of his way to meet Jeb Bush in New York, according to The Australian. Like Christie, and like most governors who’ve moved on to the White House (including Bill Clinton and George W. Bush), and like Barack Obama, Bush doesn’t have a lot of foreign policy experience or knowledge, though he touts himself as something of an expert on Latin America.

As Christie Watch has pointed out, Bush has lots of baggage to overcome, and not just his family name. Bush’s connections to Wall Street and to Lehman Brothers, the firm whose collapse helped trigger the 2008 meltdown, will be something he’ll have to explain. And Bush is emerging as a foreign policy hawk in his brother’s footsteps, which won’t endear him to war-weary voters.