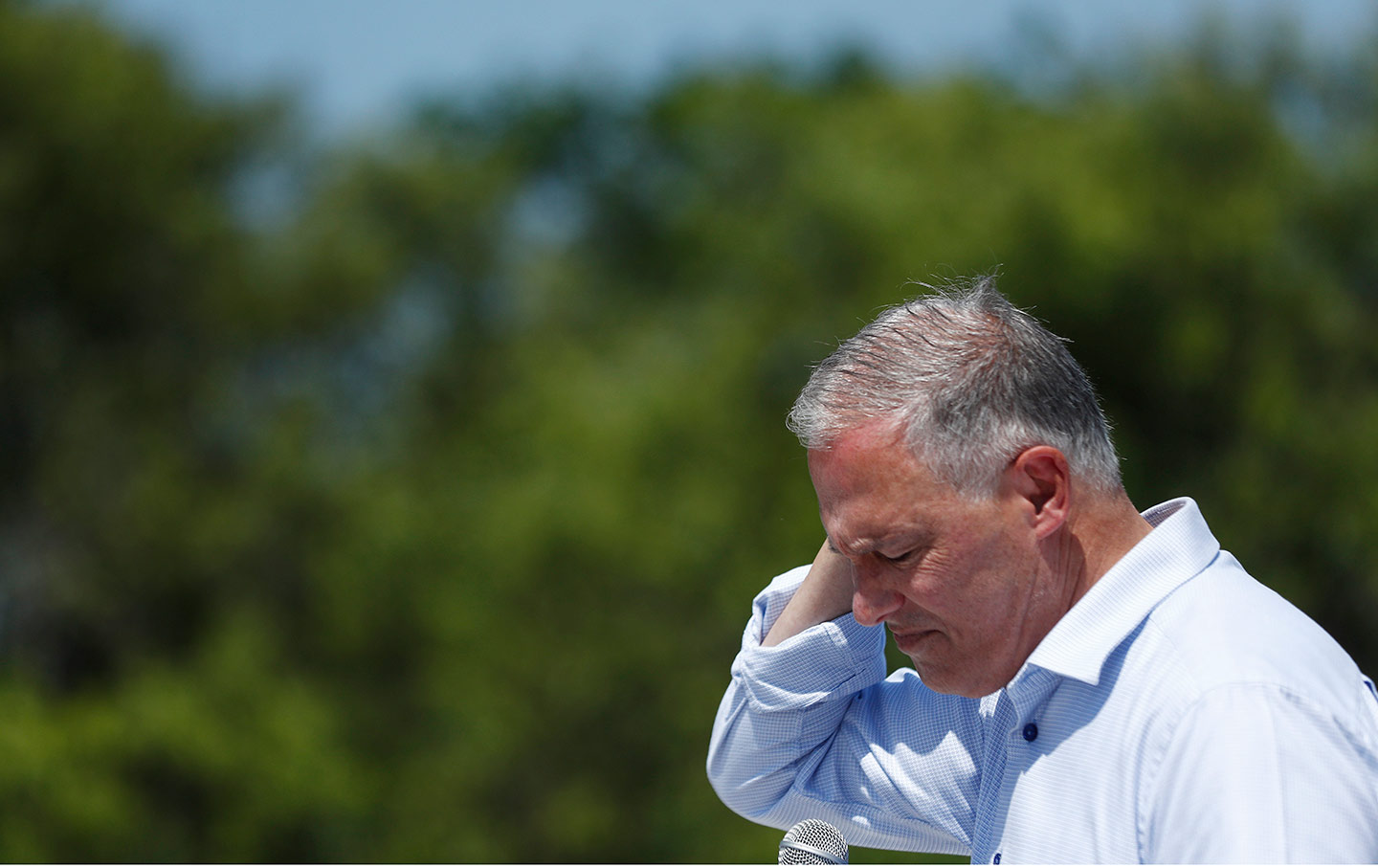 It is fair to say that the Democratic Party has more presidential candidates than it knows what to do with. The debates, so far, have been a largely directionless exercise in trying to be heard. When serious contenders roll out plans for addressing the most consequential issues facing the nation, they are barely noted in a cacophony of punditry about what it means when a candidate whom almost no one has heard of cannot get to 1 percent in the polls.

The easy response to this circumstance is to announce that most of the runners should quit the competition. But that’s not the right response. Some candidates should exit because they are just taking up space—and we are not talking here only about candidates who are polling in the asterisk zone. At the same time, some candidates, even if their polls are weak, have been muscular contributors.

On the strong side of the ledger had been Washington Governor Jay Inslee, ever since he announced on March 1 that he would enter the crowded Democratic contest as “the only candidate who will make defeating climate change our nation’s number one priority.” Unfortunately, on Wednesday, Inslee quit the competition with an acknowledgement that “I am not going to be carrying the ball, I am not going to be the president.” It was an honest statement as regards a campaign that has fallen short in efforts to win a place in the third round of debates. What makes his exit such a loss is that, while he was not on track to win many actual primaries, Inslee really was winning the ideas primary.

That was obvious in the last round of debates, when it was Inslee who often seemed to be the only candidate who was actually debating. While several other contenders ably advanced their agendas—especially Vermont Senator Bernie Sanders and Massachusetts Senator Elizabeth Warren—it was Inslee who forced the essential issue of the contest with its front-runner. The governor called Joe Biden out, saying, “Look, climate change is not a singular issue, it is all the issues that we Democrats care about. It is health. It is national security. It is our economy. And we know this; middle ground solutions, like the vice president has proposed, or sort of middling average-sized things, are not going to save us.”

Biden shot back with a claim that “there is no middle ground about my plan,” but Inslee did not let the former vice president off the hook. “I was challenged by the vice president,” the governor interjected. “May I be heard on this for a moment?”

INSLEE: Thank you very much. Look, we have—these deadlines are set by science. Mr. Vice President, your argument is not with me, it’s with science. And unfortunately, your plan is just too late. The science tells us we have to get off coal in 10 years. Your plan does not do that. We have to have off of fossil fuels in our electrical grid in 15. Your plan simply does not do that.

I’ve heard you say that we need a realistic plan. Here’s what I believe…

BIDEN: My plan calls for 500,000 charging stations around the country so by 2030 we’re all electric vehicles. My plan calls for making sure that we have $400 billion invested in technologies to learn how to contain what we’re doing, creating 10 million new jobs.

We will double offshore wind. We will end any subsidies for coal or any other fossil fuel. But we have to also engage the world while we’re doing it. We have to walk and chew gum at the same time.

BASH: Thank you, Mr. Vice President. Just to clarify, would there be any place for fossil fuels, including coal and fracking, in a Biden administration?

BIDEN: No, we would—we would work it out. We would make sure it’s eliminated and no more subsidies for either one of those, either—any fossil fuel.

INSLEE: We cannot work it out. We cannot work this out. The time is up. Our house is on fire. We have to stop using coal in 10 years, and we need a president to do it or it won’t get done. Get off coal. Save this country and the planet. That’s what I’m for.

We need more of this in the debates, not less. There is no question that there should be a single-issue debate focused on the climate crisis—as the Sunrise Movement has demanded. Nor is there any question that a number of candidates are prepared to discuss this issue with depth and vision; Sanders just produced what Friends of the Earth Action refers to as a “paradigm shifting” $16 trillion plan that builds on the Green New Deal agenda that many contenders are talking up, New Jersey Senator Cory Booker has outlined detailed environmental justice proposals, and billionaire Tom Steyer has a track record of raising the right concerns.

But Inslee’s confidence and energy, his experience with climate issues, and his willingness to use all of his political skills to challenge other candidates (especially Biden) when they tried to dance around those issues, distinguished him. The Democratic debates could afford to lose a few candidates. But they could not afford to lose Jay Inslee. His exit leaves a void that the remaining contenders are duty-bound to fill. And it will not be so easy a task as the pundits presume.