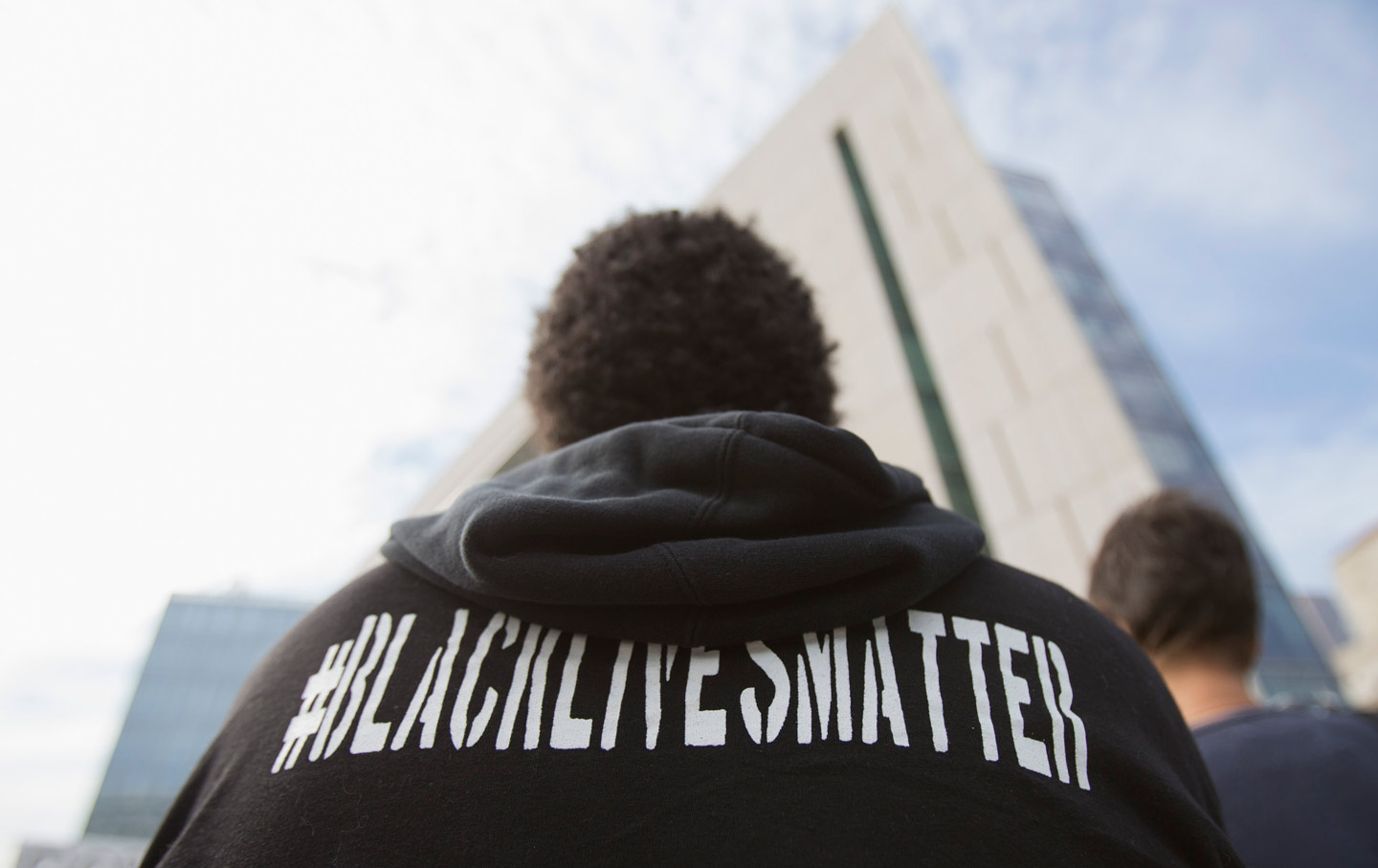 Jasmine Abdullah, an activist for Black Lives Matter, was released Saturday on bail after being jailed earlier this month for attempting to “unlawfully remove a suspect from police custody,” a charge that in California used to be known as “felony lynching.” Abdullah (who at the time of her arrest went by her legal surname, Richards) was arrested last August. She was in a group of activists who were leaving a peaceful rally protesting the shooting of an unarmed 19-year-old black man by the Pasadena, Californa, police. After the rally, the group encountered police detaining a woman who had been involved in an argument with a restaurant owner. Abdullah says they tried to help the woman; officers differed. She was arrested two days later and charged with inciting a riot, child endangerment, and obstruction in addition to the lynching charge.

The term “felony lynching” has been at the heart of much discussion over Abdullah’s case. The California law was created in 1933 as a response to the actions of a vigilante mob that seized and hanged two white men who confessed to killing the 22-year-old son of a storeowner. The law was designed to make it a crime to remove someone from police custody. The term “lynching” covers any extrajudicial punishment by—in the words of the 1933 law—“means of riot,” but the term has historically referred most often to hangings of blacks by mobs of whites. Last year, California Governor Jerry Brown removed the words from the state penal code after another Black Lives Matter activist was arrested under the law, to much protest, but the heart of the law remains intact.

By the time Abdullah’s trial began a few weeks ago, she faced only the felony-lynching charge, and four years in prison. On June 7, Abdullah was sentenced to 90 days in Los Angeles County jail, three years of probation, and was ordered to attend a year of anger management classes.

According to Vox, Abdullah is the first African American to be convicted of “lynching” in the country.

Since then, the California native has been at the center of a #FreeJasmine campaign and has been hailed by some as one of the first political prisoners of the Black Lives Matter movement. Her conviction not only caused folks to take to the streets and protest the charges, but also resulted in almost 89,000 people signing a petition that tried to get Judge Elaine Lu to release Abdullah before she handed down her sentence. A new petition has been launched at Color of Change, calling for Brown to overturn Abdullah’s conviction and pardon the young activist.

Abdullah’s story doesn’t just highlight injustice around race, protest, sentencing, and Black Lives Matter, it also tells of the real sacrifices that many young black activists are making in order to stand up for causes they believe in.

I spoke to the young activist in February by phone while she was awaiting trial and dealing with the death of a friend, who had been murdered that week. She was walking around her neighborhood, an area she said she had to leave because police were threatening her family.

Sitting thousands of miles across the country, I heard the story not of a violent monster, but of a young woman who was fighting against invisibility in the world, figuring out her place in the movement, and working out the best way to deal with the trauma of being a black woman in America in a way that made sense to her.

After reading about Abdullah’s conviction and sentencing, I thought again about the conversation we had and the challenges and stress that come with being involved in the movement for black lives, a movement Abdullah believes is not only critical to her community but also crucial for brining positive change to her own life. Here is some of our conversation, condensed and edited for clarity.

Reniqua Allen: Tell me a little about yourself.

Jasmine Abdullah: I’m 29 years old and I’m an activist, freedom fighter, organizer for BLM and core member and founder of Black Lives Matter Pasadena. I am a full-time activist, but I’m going to start school next semester.

I moved here when I was about 6 or 7. I played basketball all my life. I was really good. I got scholarship letters. They retired my number. My big brother died when I was—he was murdered when I was 14 years old. So, I went through this phase in my life when I was like, “Why should I keep trying in life? Let’s just go all gas, no breaks down a self-destruction road.” So I did that.

How did you get involved with the movement?

I had received a message from one of my co-workers, a white girl, she said, “Do you want to go to Ferguson?” At this moment, I had just seen this 7-year-old girl on TV. They had milk; they were pouring it on her face because the police had tear-gassed her. I was sitting there angry and so I was like, yeah, I want to go. I received a text message—no, a Facebook message by Patrisse Cullors, that was like, Meet us. They were talking about meeting and doing a freedom ride. The following week we hopped on the road.

It was four or five vans of young folks, older folks and we went to Ferguson. We drove through Arizona, Texas, Utah. I’ve never experienced racism like I’ve experienced out there. Out here it’s very subtle. Like, a white person would just cross the street if they see a group of black people walking. On an elevator they clutch their purse. But out there, I remember Utah, this older white gentleman, he tells his grandson, “How did you count all of them?” And so, I looked at him. I was like, “We’re not cattle, black sheep. We’re people.”

Once we got to Ferguson, it was really, really crazy for me. I remember going back to the church with the whole BLM group. I wanted to cry, but I couldn’t. I had pent up aggression. In my community, crying is a form of weakness. I was sitting there huffing and puffing and Melina Abdullah, she walked up to me and she said, “Cry.” I started weeping. Soft. And then she hugged me and I started crying like a 6-year-old kid. And Patrice and some other women, they surrounded me and did a circle. I started going to meetings that week. It was life changing for me.

What kinds of actions have you participated in since then?

I don’t want to incriminate myself.

Whatever you’re comfortable with.

I don’t know how far to answer that question here, being that I have three open cases [related to protest actions]. My lawyer would be mad.

Kendrec McDade was killed by the Pasadena police. We did an action in Old Town…the mother of Kendric McDade and probably 40 other people. So, that’s why I’ve been really targeted by them. They covered up his murder by not releasing public information, which is the independent review report. It was zero percent redacted before we started with this, now 88 percent of that report is redacted. This is all because of the work we’re doing out here. So, they’re targeting the shit out of me. It’s just crazy. But, that’s why Pasadena is targeting me. There’s never been protest out here. It’s never been—especially black or brown unity.

How has the movement impacted your life otherwise? I know you said you had a job interview recently after getting fired from a few gigs recently.

I got fired from [another job] once I got the terroristic charges. [At the time] I’m not—I haven’t even been found guilty or anything else. But they fired me. I went and had the consultation with the HR department. It didn’t work. So, I’m like what’s the use. And so, I will try again.

Do you think this is happening multiple times because of your work in Black Lives Matter? Was it easier to keep a job for you before that?

Oh, yes. It was easy to find a job and keep a job. If I didn’t want the job because I didn’t like it, I would just quit and find another one in a week. [Now] I think people are looking me up, as well as they’re seeing me on the news every other day. They’re like, “You’re that girl. You’re the Black Power girl.”

People care, my community is watching. The folks that you would never thought would ever talk about it, they’re talking about it. They’re talking about the love and they are really feeling it. But I think the jobs are looking me up. But if they would listen to the words that are coming out of my mouth and hear me, they wouldn’t feel that way.

Why do you keep working with Black Lives Matter? Why keep doing the work if your employment is being affected by this?

It’s also my life at stake. If I don’t do this, I’m going to die. My friends are going to die. Because we don’t have the resources we need. I have to bury one of my friends every other week. I put them on my T-shirt, I have to put tattoos on my arms, and I’m just tired of it. If I don’t do this work—nobody’s going to save us but us. So, it’s a matter of life and death. If I died, I can’t work anyway.

Doing this work is very, very important to me because we have to change the hearts and minds of the community.

Anything else you want to add?

If we don’t do this work that we’re doing then we’re going to die. We’re in the process of elimination right now. They don’t care about us, so, I’m begging for all of our people to have an open mind and open heart and plug in how you can plug in. If you don’t want to jump on cars and be in police face, don’t. But plug in how you can plug in. Do what you can do. Activate how you can activate. [A colleague] does dance. She incorporates dance activism into the movement. And it works. While we’re doing protests and stuff, we’ll just bust out and start doing a dance and stuff. You know what I mean? So, just that people plug in how you can plug in, because there’s nothing—there’s no bad move, everything is needed and all people are needed, because this is a long struggle.