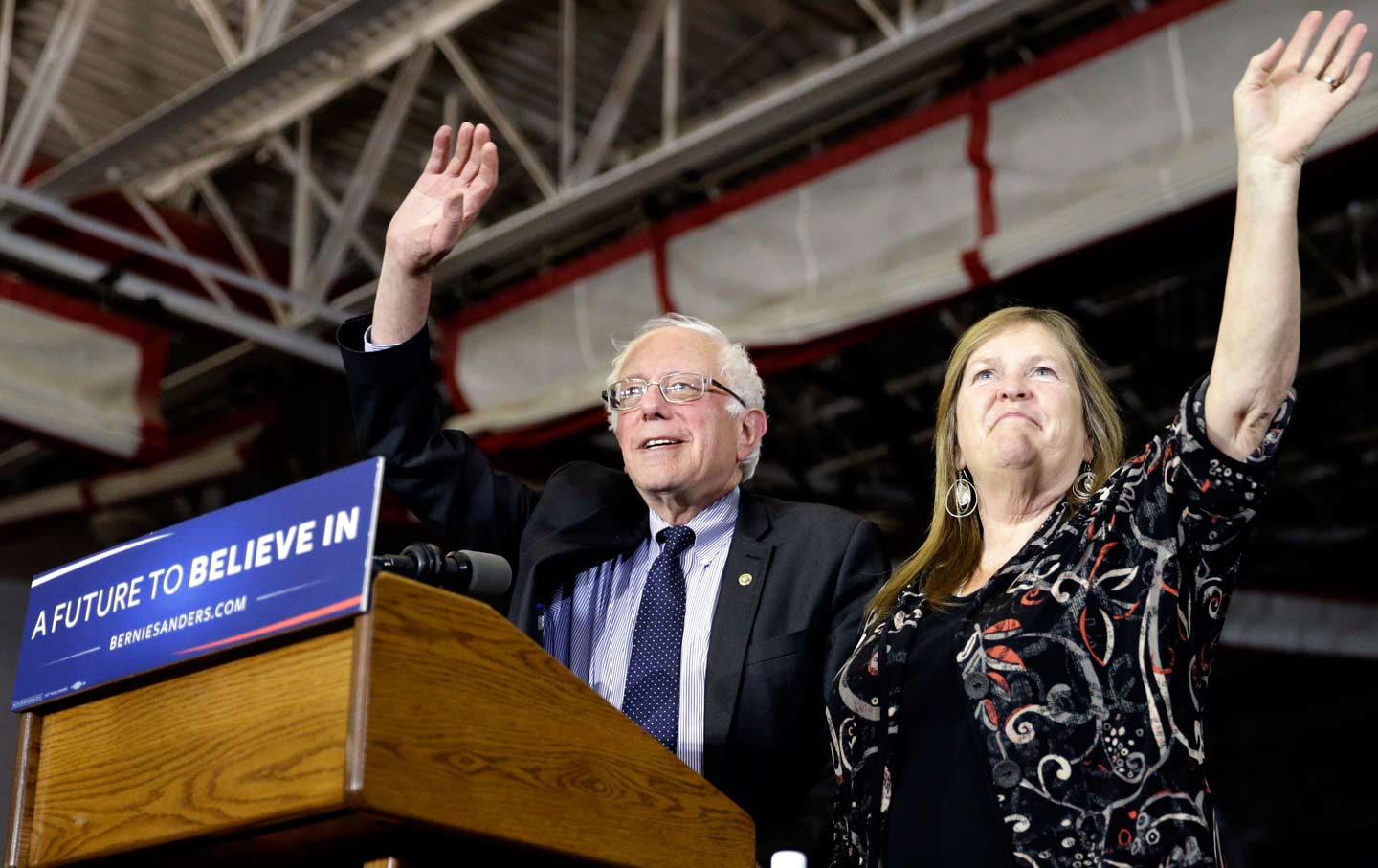 Considering the critical issues facing America’s public schools, the amount of time the presidential candidates have given over to substantive discussions of our K-12 education system has been pitiful. From high-stakes standardized testing, charter schools, school funding, and zero tolerance disciplinary policies, educators, parents, students, and the general public don’t know where the presidential candidates stand. These are issues that have a direct impact on fifty million students and their families in almost one hundred thousand schools across the country.

Last week, at Senator Bernie Sanders’s presidential campaign’s rally in Long Island City, I interviewed Dr. Jane Sanders, social worker, educator, and adviser and Bernie’s longtime spouse. She has served as the provost and interim president of Goddard College and president of Burlington College, both in Vermont (full disclosure: I have volunteered for the Sanders campaign, and I am currently a student at Goddard College). We discussed Sanders’s work as an educator and a wide range of topics in education, from progressive education thinkers like John Dewey and Maria Montessori to hands-on, apprenticeship models of learning. This interview has been lightly edited for clarity.

Nikhil Goyal: Talk to me a little bit about your childhood growing up in Brooklyn. I know one of the things Bernie has talked about in his interviews is the amount of unstructured, unsupervised learning and play that was happening.

Jane Sanders: It was great growing up in Brooklyn. The neighborhood was the street. Everybody would get together after school. Somebody would sit out on a stoop and then five other people, 10 other people would come out—a game of stickball or stoopball or dodgeball—all revolved around a basketball or dodgeball. We had fun. It was excellent, because nobody was telling us what to do. We did what we felt like doing at the moment. We had to figure out on our own if there was any dispute of any sort. We worked it out as a group. It was a really good upbringing.

What made you decide to come to Vermont and Goddard College?

I was also a student at Goddard College before. I think you’ve chosen well. It’s a great school. I read Mother Earth News long ago. They talked about town meetings: one person, one vote. People really had a voice, a sense of community. To hear about Goddard, which is all around progressive education and a sense of community, they had their own ways of making decisions, which included everybody. I just was impressed by all that, and I thought it would be a wonderful place to live. I was right. Vermont is fantastic. Goddard was a joy.

How would you describe progressive education?

Pretty much under John Dewey. Just having the students have more of a say in what it is they want to learn. You might be studying philosophy, math, or English, but you’re learning about what your passion is. Instead of having there be a prescribed set of study—that has a person conveying that knowledge to you—the teacher, the professor is a facilitator to try to meet your needs and to get you thinking critically and writing clearly and communicating effectively.

It seems to me that progressive education is essentially the antithesis of traditional schooling and what we see in most conventional schools. Under a President Sanders administration, how would the Department of Education function? What would be the contrast to what we’ve seen in the past couple of decades with a lot of standardized testing and corporate education reforms?

We’d be going in the exact opposite direction. No Child Left Behind was a disaster. We don’t really believe in standardized testing. I think our purpose would be, schooling is meant to help people be creative, to have their curiosity stimulated, and have them be actively thinking whatever they’re thinking about—whether it’s the stars, the universe, climate change, anything. Having them be able to feel they can explore anything, learn anything.

There’s a massive movement in New York around opting out of state testing. Two hundred and forty thousand parents last year, or 20 percent, opted out. If you had your child in school right now, would you opt your child out?

Bernie Sanders, as part of the Every Student Succeeds Act—which President Obama signed in December—one of the things [Sanders] was advocating for was moving away from standardized testing and towards portfolio-based assessment.

Yes! It’s interesting, because we’ve made progress with IEPs [Individualized Education Programs] for people with disabilities, or students who need extra help. I think every student should have an individualized educational plan.

Why should it only be for the special-education students?

Absolutely. As a parent, I had these kids, I didn’t know who they were. I wasn’t molding them to be me or my husband. What we wanted to do was find out: Who are they? What are their abilities? What are their interests? What are their talents? I think we need to do that in our schools.

We are definitely opposed to corporal punishment. Just like the police, we need to teach them how to de-escalate situations rather than use lethal force. With teachers, we need to have, as part of their training, how do you deal with students that are disruptive in a way that actually helps instead of banishes them, labels them, or hits them. That’s not acceptable.

One of the things that’s been a major critique of public schooling in the past decade is the corporate education reform movement. Bernie has come out in support of the Chicago Teachers Union and against school closures and high-stakes standardized testing. Bernie talks about the billionaires buying the election process and the economy, and in education, it seems to me that Bill Gates, the Waltons, and Eli Broad are doing many of the same things, just with charter schools and high-stakes testing.

I think that some of them, like Bill and Melinda Gates, have very pure motives. They really want to help. I think that they should be part of the discussion. I really do. But we agree with the Chicago teachers.

One of my final questions is looking at teachers unions. The American Federation of Teachers and the National Education Association endorsed Hillary Clinton, but I’ve seen that in the rank and file, a large portion of them support Bernie, because he’s talking about the major issues that affect them in the classroom. Obviously, one of the common phrases is: Teachers’ working conditions are students’ learning conditions. What do you think of the role of teachers unions in these struggles for educational justice?

We’re very strong supporters of unions, whether they support him or not. The unions that poll their members, they support Bernie. I think teachers unions are extremely important. Parents need to be involved. One of the things that’s happening [in unions] is that there is not enough community building, where everybody sits down, as we do at Goddard. You sit down and come to a consensus or an agreement. It’s a problem we’re having in politics, in union negotiations, and in education.

Who do you think are some of your most influential heroes in education? Who are the people you’ve most been inspired by in your scholarly work?

[John] Dewey, [William Heard] Kilpatrick, Robert Coles. One of the things I like are the people who focus on philosophy as the underpinning of their work.

People like Maria Montessori, Dewey, Rudolf Steiner. One of the things that was emerging in the 1960s, and Bernie has written about this a little bit, was the free school movement. I’m curious, has that affected you in any way? Did those writings change your vision on education at all?

I was a strong supporter of Montessori when my kids were very little. I homeschooled for a year, and then we did public school all the way through for the kids. I went to Catholic and public school depending on where I lived. I think that education is something—it takes place in the classroom. It’s all up to that teacher. We should be respecting and rewarding teachers.

We should pay them very high salaries.

We should pay them higher salaries, but we should also be respecting them as doing the most important work in the world. One of the things I’d like to do if I had the opportunity, we’re doing it anyway, is to look at all the different models of education all over the world. Anybody who has a teenager knows that they don’t like to sit in a classroom and be lectured.

Yeah. But what they do like is they want to play a meaningful role. They want to be a part of their community. We keep them out in every respect. We keep them isolated in school. They can’t get jobs, because there are no jobs. And they don’t feel needed. In Switzerland, for instance, throughout their school system, they have apprenticeships. Students go to school and learn things and a few days a week, they go out to work. They learn theory and practice and feel they are involved in the community. They are respected. They have different relationships with people outside.

It’s hands-on learning. It’s bridging the gap between the community and the classroom.

I am an experiential learner. That is my bias.

If Bernie is elected president, what do you think your role would be as first lady, especially because you’re an educator and you seem very passionate about this subject?

I think what I’d do is try to do the research, find out what’s happening around the world, what’s really working, and bring it back. Not as “we should do this,” but bring it back to the teachers and the principals and the educators and ask them what do you think about this idea and how might we make this American, how might we do this. And have the students and the parents be part of that conversation.

I see my overall role, if I had the honor, as listening to the voices here in America that are not being heard and putting them out there for people to hear, but also researching and learning some of the best practices everywhere else and bringing them back here and letting them be heard as well. Kind of a megaphone.