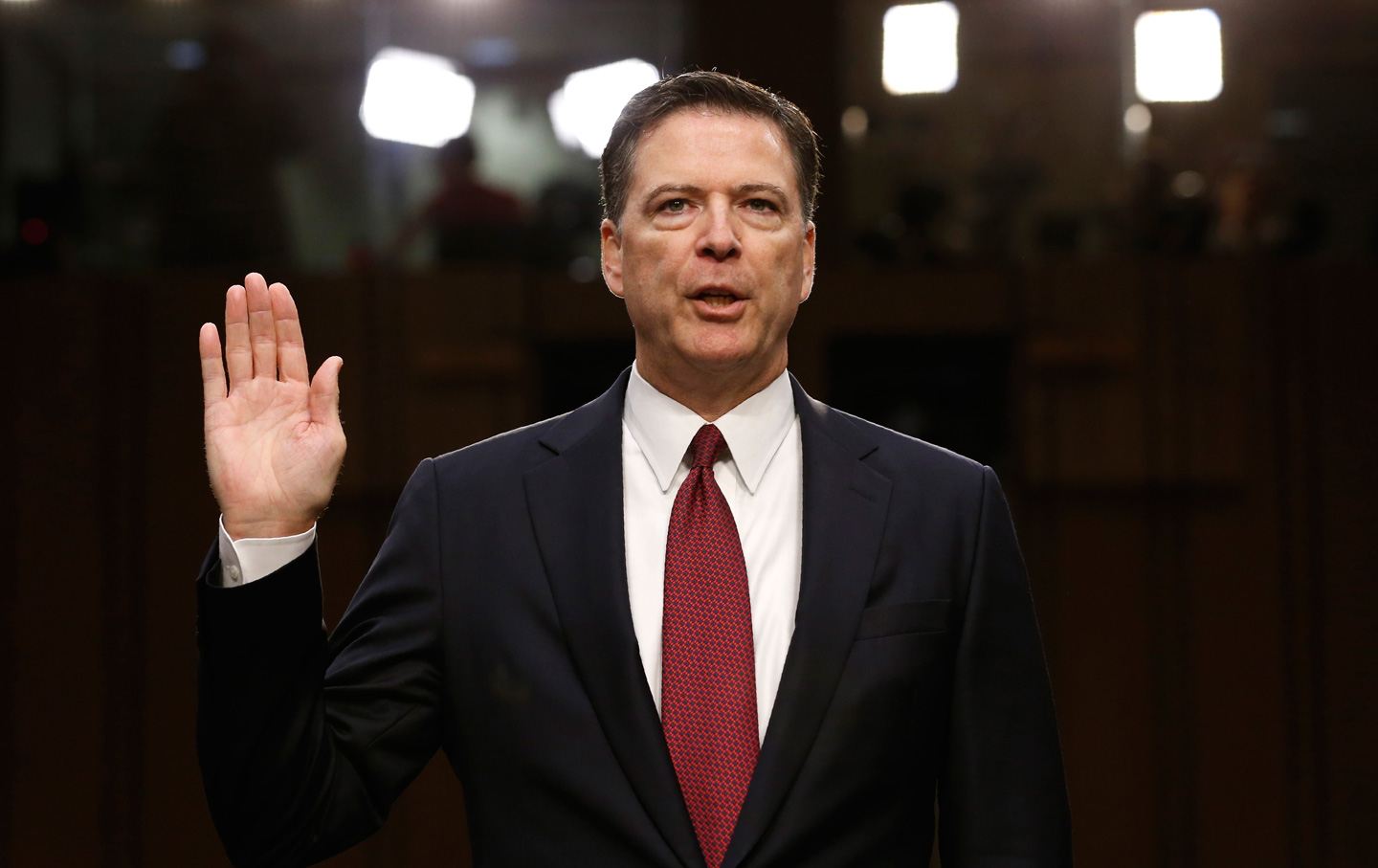 The climax of James Comey’s long-awaited book, A Higher Loyalty: Truth, Lies, and Leadership (Flatiron Books), is a vivid and totally believable account of his infamous one-on-one dinner with Donald Trump. On what was clearly the most important night of his life, the moment when his lifelong study of ethicist and theologian Reinhold Niebuhr comes to fruition, Comey is asked to pledge his loyalty—and he refuses. “Ethical leaders,” Comey writes, “never ask for loyalty;” instead they earn it through “honesty, decency, commitment, and their own sacrifice.” And so in that moment, Trump is revealed as a bad leader and an unethical liar. And by doing the right thing, James Comey becomes, in his own eyes, a true leader.

Many people have observed that we don’t need to slog through 300-plus pages to learn that Trump is an unethical liar; “No shit, Sherlock,” quipped my Nation colleague Annie Shields. And of course, the book says almost nothing about Russian interference in the election, since that’s the subject of an ongoing investigation. But still, it’s good to know that the former head of the FBI sees Trump the way we do.

Lost in the escalating feud between Comey and Trump, however, is perhaps the book’s primary motive, which is to validate Comey’s decision, 11 days before the election, to publicly reopen the investigation into Hillary Clinton’s e-mails. Before Comey gets into those weeds, though, he spends 200 pages on life lessons and ruminations on leadership. He sees his memoir as a self-help book for leaders, and he also wants us to understand his actions on that day in a larger context, as one instance of the kind of leadership he aspires to exemplify. When he took over as head of the FBI (from Robert Mueller), Comey wanted everyone to know that he had “an ambitious goal”: to make the FBI into “the government’s leadership factory.” The bureau would become “the dominant government supplier of America’s corporate leaders”—now there’s a frightening thought! According to Comey, he demonstrated what he meant on his first day as director when he gave a speech to employees while wearing a blue shirt; Mueller had always worn white shirts. That’s just the kind of guy Comey is—shaking things up!

When Comey finally does get to Clinton’s e-mails, he claims that “despite what politicians and pundits may say, there are no written rules about how the FBI should handle investigations as elections draw near.” But that’s not how two former deputy attorneys general, one Democrat and one Republican, put it in The Washington Post. Jamie Gorelick (a Clinton appointee) and Larry Thompson (George W. Bush) write:

Decades ago, the department decided that in the 60-day period before an election, the balance should be struck against even returning indictments involving individuals running for office, as well as against the disclosure of any investigative steps. The reasoning was that, however important it might be for Justice to do its job, and however important it might be for the public to know what Justice knows, because such allegations could not be adjudicated, such actions or disclosures risked undermining the political process. A memorandum reflecting this choice has been issued every four years by multiple attorneys general for a very long time, including in 2016.

Moreover, Comey had no evidence that Clinton had committed a crime. Nobody at the bureau had even looked at the e-mails on Anthony Weiner’s laptop when Comey went public, arguably changing the course of the election.

Of course, there was a problem with the way Clinton handled her e-mail. Historians and journalists have insisted for a long time that high officials’ e-mail must be preserved as part of the National Archives, along with their documents written on paper. That’s because democracy requires that citizens know what their officials have said and done—even though officials usually do what they can to keep their private communications secret, now and forever. That’s why Clinton’s setting up a private e-mail server was an offense, and why Comey was right to be excited when he learned, as he reports in the book, that, for some mysterious reason, Weiner’s laptop contained thousands of Clinton’s early BlackBerry e-mails, dating from her start as secretary of state, which were missing from her server.

Comey knew his decision would be controversial. He writes that his boss, Attorney General Loretta Lynch, let him know that going public “was a bad idea…but that it was my call and they didn’t see a need to speak with me about it. They didn’t order me not to do it, an order I would have followed.”

Lynch, however, disputes this account. She claims that Comey violated “the Department’s long-standing policy of neither confirming nor denying the fact of an ongoing investigation…. If he had any concerns regarding the email investigation, classified or not, he had ample opportunities to raise them with me both privately and in meetings. He never did.”

Comey told a different story in his interview with ABC’s George Stephanopoulos. He did not say that Lynch let him know that the decision was up to him; he said that what propelled him to go public was that Lynch had a credibility problem after her meeting on the tarmac with Bill Clinton, and he didn’t want people to believe “Loretta Lynch was controlling me and the FBI.” Comey suggested to Stephanopoulos that in going public days before the election, he was defending the FBI from being politicized—by Loretta Lynch.

Comey also wants us to believe that he did the right thing when he decided to follow long-standing department policy and not announce that Russia’s efforts to elect Trump president were also being investigated. The choice in both cases, he says several times, was “speak, or conceal.” He decided to speak about Clinton, and conceal about Trump. And he wants us to accept that making tough decisions like those is what “great leadership looks like.”

From the first pages of the book, Comey insists that “ethical leadership” has been the central concern of his life “since I was a college student.” (The contrast with a certain president is unstated but clear.) He studied ethics, especially in the work of Niebuhr. He welcomes criticism. He hopes to learn from criticism, and do better. He wants you to see how much self-awareness he has, that he knows he can be “prideful and overconfident.”

If Comey had written a book about how being “prideful and overconfident” led him to violate long-standing department policy and also political wisdom, with disastrous results, that would have been great. If he’d admitted that his self-awareness failed him that day, we would admire him (although not as much as he admires himself). But he’s still feeling defensive and wants people to give him credit for having made the right decision.

Comey also knows that he’s not going to get that, evidence of what he calls his “emotional intelligence,” a quality he writes is required of genuine leaders. When people criticize you, Comey observes, often “it’s not about you”; instead it’s “all about their lives, their troubles, their hopes and dreams.” So if we aren’t convinced by Comey’s arguments about his decision, it’s because we hoped and dreamed about President Clinton—while he is committed to the good and the true. You might say that seems more like being “prideful and overconfident” than being emotionally intelligent.