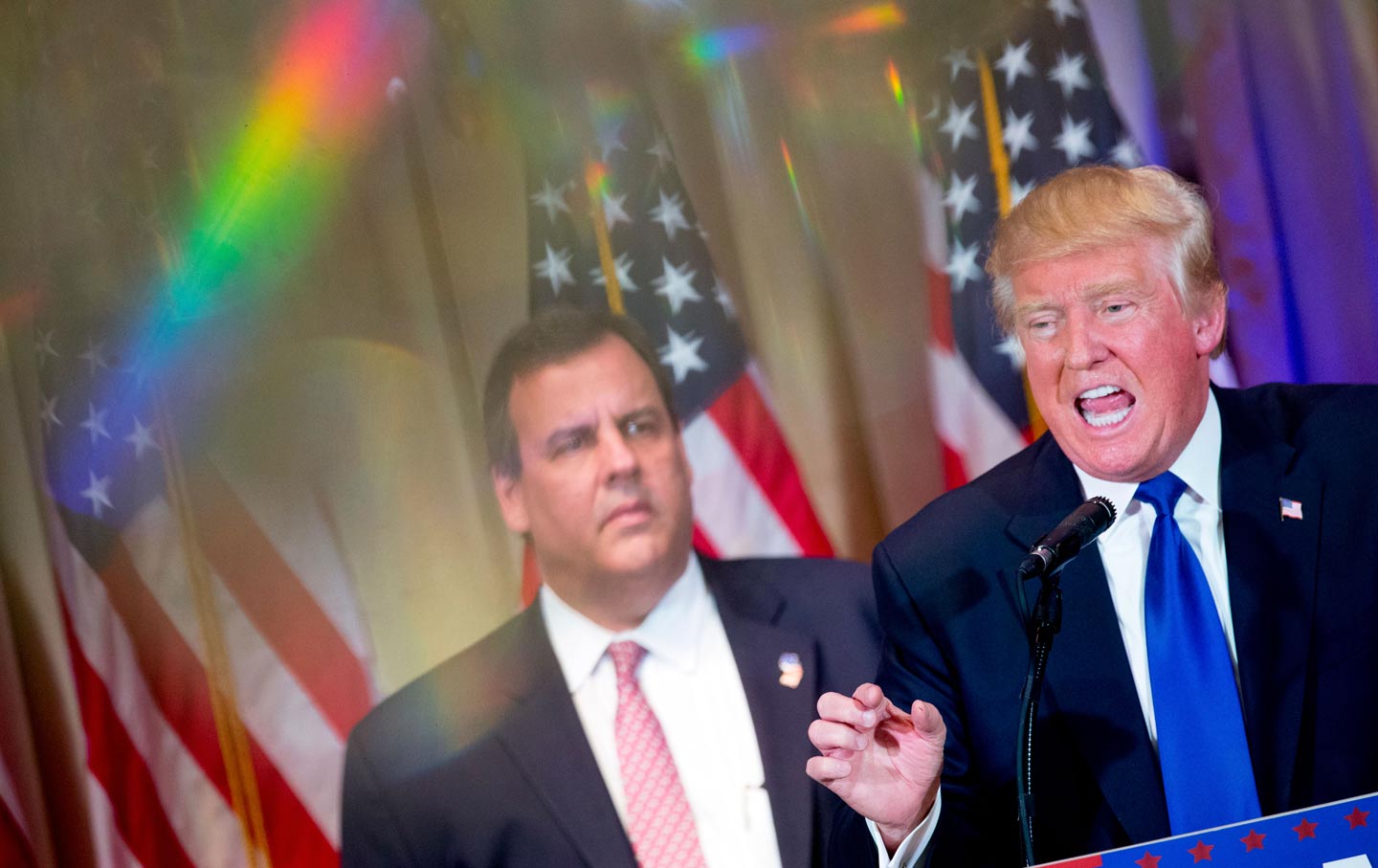 Chris Christie stood a few feet behind Donald Trump on Tuesday night in Palm Beach as Trump thanked voters and settled the truly open question of whether he disavows the support of David Duke. (He does.) Christie’s instantly famous expression evoked a hostage tape, or a man in the midst of an existential crisis so severe he might soon strip and walk into the ocean. Meanwhile, Senator Lindsey Graham, who joked earlier this week about killing Ted Cruz, reluctantly said on CBS: “We may be in a position where we have to rally around Ted Cruz.”

It’s really happening—Donald Trump is the presumptive Republican nominee. He scored victories in six of the 11 states up for grabs on Tuesday night, and won by huge margins in places like Alabama and Tennessee but also in Massachusetts, which the networks called for Trump only seconds after polls closed.

Marco Rubio won only Minnesota and, as of this writing, was struggling to get over 20 percent voting thresholds in Texas, Tennessee, and Alabama. If he can’t reach 20 percent, it denies him a vast majority of delegates in those states. Cruz did better, clearing most of the thresholds, but still only won his home state and adjacent Oklahoma. This was supposed to be his big night. A Southern-dominated primary was the best arena for Cruz’s heavily evangelical and conservative campaign, but he didn’t draw too much blood from Trump.

If in some alternate universe Scott Walker had amassed a victory like this on Tuesday night, and following resounding wins in South Carolina, Nevada, and New Hampshire, he’d be crowned the obvious nominee. The traveling press following his opponents would evaporate, and the narrative would shift to the general election. That hasn’t happened with Trump, and for good reason—we’ve never seen an entire party structure turn against its own nominee, so this is uncharted territory. Trump has precious few congressional endorsements, and several conservative groups are throwing millions into a last-ditch effort to stop the real estate mogul.

So we’ll hold back on saying Trump has this completely locked down. But he’s still the overwhelming favorite to become the leader of the Republican Party within the next few weeks, and it’s worth looking at all the ways Trump’s party doesn’t resemble the GOP that’s currently crumbling away.

The GOP is best understood as four different factions: moderates and evangelicals each make up about a third of the Republican base, while Tea Partiers and observant Catholics are each around 15 percent of the GOP. On many issues, Tea Partiers and evangelicals align, as do moderates and observant Catholics, forming a rough 50–50 split in the party.

Trump leads or is highly competitive among all these groups, and is the only candidate who doesn’t have a glaring weakness with one or more of them. His base of support is in the Tea Party. According to recent polling from Democracy Corps, he leads Cruz 50 to 26 with Tea Party voters, and Rubio pulls only 12 percent. He splits evangelicals with Cruz, where Rubio again doesn’t do terribly well, and Trump leads Rubio among moderates 24–21. (Cruz gets only 4 percent with them.) Observant Catholics, who are spread out in the larger Atlantic Coast and Rust Belt, actually slightly favor Kasich, but Trump is a close second.

There are two things that unify all of these factions: deep loathing for the Democratic Party, and serious concerns over immigration. The Democracy Corps poll shows these two issues are singularly motivating the entire GOP—even among moderates, 79 percent want an anti-immigration presidential candidate and 88 percent think Democrats threaten the country’s “well-being.”

The genius of Trump’s campaign has been realizing this from the start. Promising to build a wall on the Mexican border and to expel all undocumented immigrants, not to mention questioning President Obama’s legitimacy as a president and a citizen for years, hasn’t cost Trump support from moderates. It also appears to have given him an unshakable popularity with the conservative side of the party. Trump has a big lead with Tea Partiers, despite some otherwise unorthodox acts—Trump says nice things about Planned Parenthood, rarely talks about climate change being a scam, has a nonexistent record on gun control, and isn’t running around talking about shutting down the EPA nor the IRS.

Those very same positions, or lack thereof, are giving Trump access to the other half of the party. The observant Catholics and moderates tend to be more populist: As a group, they believe people making over $250,000 should pay “a lot” more in taxes and they believe a free market needs some government regulation. They also accept the science of climate change, don’t like the National Rifle Association, and, as we wrote this morning, Republican moderates are pro-choice and don’t have overwhelmingly negative feelings about Planned Parenthood. The more Cruz and Rubio attack Trump on those issues, the more they probably help him with Republican moderates.

In short, Trump is giving Republicans the two things they truly want, while simultaneously accessing GOP voters nobody from the party has bothered speaking to in years.

This explanation, while true, does seem somewhat unsatisfactory—a little too clean and academic for the Trumpian circus unfolding before our eyes. There are other things clearly at play too: white, male resentment, for one. The party is overwhelmingly white anyway, and Trump does exceptionally well among Republican males. When the whole party says it thinks Democrats are a threat to the country—the party that in 2008 took power with the first black president, the first female speaker of the House, the first openly gay major committee chair in the House, who cowrote a monumental piece of legislation, and the party that is now running a woman and a Jewish man for president—one wonders if it’s not all about policy.

Authoritarianism is mixed in too. Some political scientists believe the GOP’s longtime law-and-order branding perhaps unwittingly attracted a previously bipartisan mix of Americans with authoritarian tendencies, and that their desire for authoritarianism has been supercharged in recent years by the perceived influx of nonwhite immigrants. These scientists theorized long before Trump that, eventually, the authoritarians would become powerful enough to demand a strongman leader in their party, and here we are.

These different theories can overlap onto one another. They still may not provide the whole picture. It’s truly hard to get a handle on what Trump is unlocking—but what Tuesday night made even more clear is that he’s poised to lead a political party we haven’t really seen before.