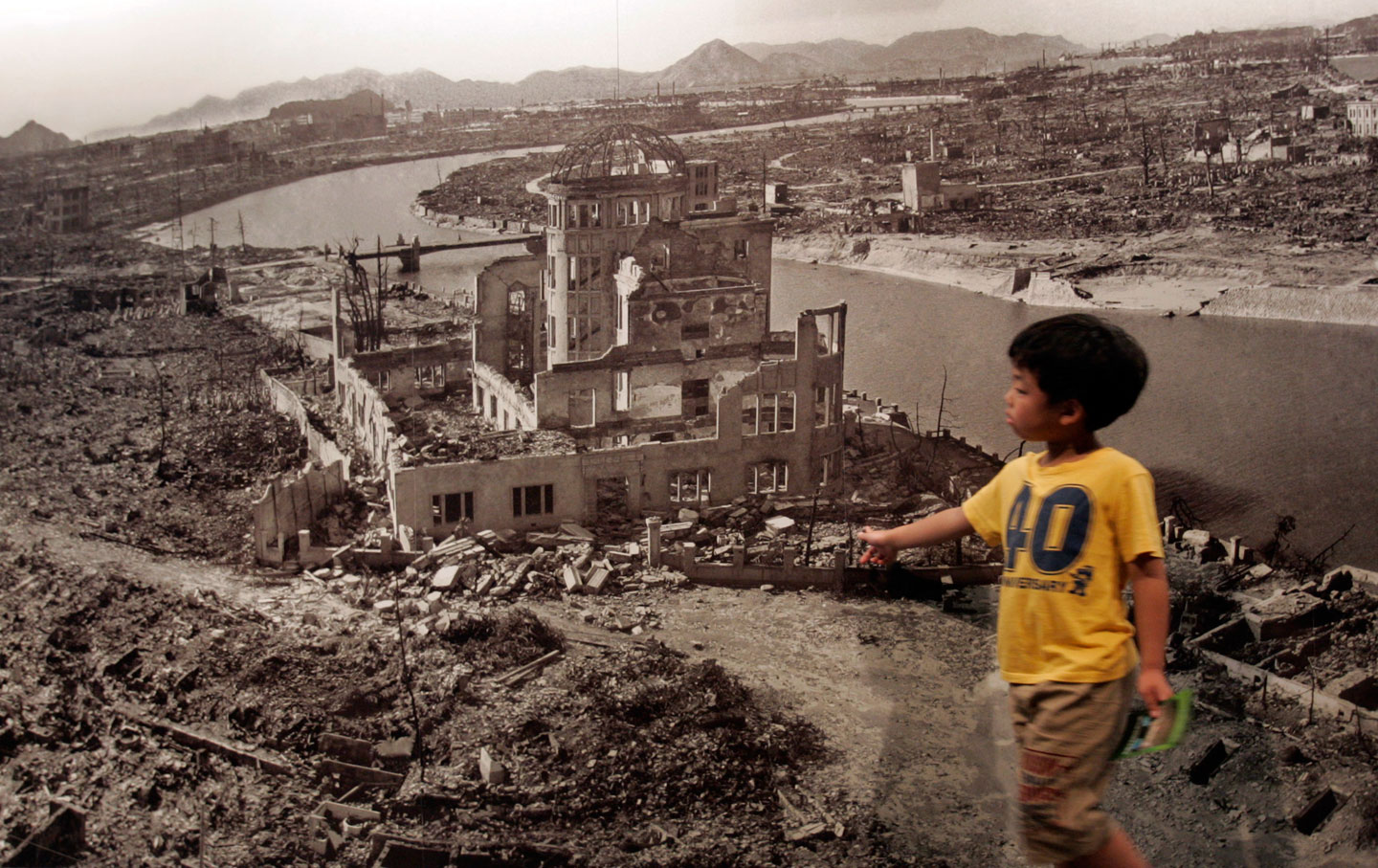 A boy looks at a huge photograph showing Hiroshima city after the 1945 atomic bombing, at the Hiroshima Peace Memorial Museum. (Reuters/Toru Hanai)

September 26, the United Nations International Day for the Total Elimination of Nuclear Weapons, is a fitting time to take stock of current nuclear dangers and rededicate ourselves to the urgent task of abolishing nuclear weapons. I encourage all readers of The Nation to take this opportunity to listen to the earnest message of the atomic-bomb survivors of Hiroshima and Nagasaki (hibakusha) who have been telling their tragic real-life experiences, expressed in their words that “no one else should ever again suffer as we have.”

The August 1945 atomic bombings of Hiroshima and Nagasaki incinerated tens of thousands of children, the elderly, women, and men in an instant, with their fierce heat rays, blast, and radiation. By the end of that year, more than 210,000 people were dead. Among them were many Koreans, as well as international students from China and Southeast Asia, and American prisoners of war. Nuclear weapons are indiscriminate weapons of mass destruction. Even today, 71 years after the atomic bombings, the hibakusha and their families continue to suffer physical, psychological, and sociological effects of the bombings.

More than 15,000 nuclear weapons, most an order of magnitude more powerful than the bombs that devastated Hiroshima and Nagasaki, continue to pose an intolerable threat to humanity. Not only that, but all of the nuclear-armed nations are modernizing their arsenals with plans to maintain them for the foreseeable future. As global awareness of the humanitarian consequences of nuclear weapons expands, the international community has also learned through a series of international conferences that the risks of inadvertent nuclear weapons use due to accident or miscalculation are quite high. And we cannot ignore the possibility of nuclear terrorism.

As a result, more members of the international community, especially those of non-nuclear-armed states, have started paying attention to the firsthand experiences of the Hiroshima and Nagasaki hibakusha, and have developed a keen awareness that they themselves could become victims of nuclear detonations caused by accident or miscalculation, if not by a limited or all-out nuclear war. In response to this shared awareness and these growing concerns, the United Nations earlier this year convened an Open-Ended Working Group (OEWG), open to all UN member states, to develop proposals to take forward multilateral nuclear disarmament negotiations for the achievement and maintenance of a world without nuclear weapons. The OEWG met three times in Geneva. As president of Mayors for Peace, an international non-governmental organization with a current membership of 7,132 cities in 161 countries representing over a billion people worldwide, I had the privilege of addressing the OEWG about the urgent need to promote nuclear disarmament.

International security still depends on the threatened use of nuclear weapons as prescribed by the doctrine of “nuclear deterrence”—a notion based on mutual distrust and the unspeakable horror the term implies. However, this theory’s power exists only in the minds of its policy-makers. Not only does nuclear deterrence offer no effective solution to the global security challenges we face, nuclear weapons are useless both in preventing and responding to terrorism—rather, their very existence brings new risks of use each day.

In order to address emerging challenges, world leaders must solidify their commitment to seek security without relying on nuclear weapons, with a sense of urgency based on a deep understanding that people at the grassroots level expect them to do so. Along the way, these leaders will also come to understand that the wider international community places great emphasis on uniting through a growing awareness that we all belong to the same human family.

It is time for the policy-makers of the world to change their perspective and exercise the decisive leadership required for the prohibition of nuclear weapons. It is only with such decisiveness that nuclear disarmament and non-proliferation initiatives can be accelerated. We believe that efforts to conclude a nuclear weapons convention will advance when government representatives who have understood the fervent desire of the hibakusha for nuclear disarmament can reach out to others to transcend their differences and overcome the obstacles to nuclear abolition.

A growing number of policymakers are visiting the A-bombed cities of Hiroshima and Nagasaki in response to the persistent call of Mayors for Peace and hibakusha to do so. On May 27, President Obama visited Hiroshima where he called for a “world without nuclear weapons” and declared: “[A]mong those nations like my own that hold nuclear stockpiles, we must have the courage to escape the logic of fear, and pursue a world without them.”

Regrettably, none of the nuclear-armed states took part in the OEWG. However, in August the nearly 100 participating states adopted a final report with recommendations that will be forwarded to the UN General Assembly for action this fall. These recommendations include pursuing additional efforts to elaborate concrete effective legal measures, legal provisions and norms that will be needed to attain and maintain a world without nuclear weapons, and implementing various measures relating to reducing and eliminating the risks of nuclear-weapons use, enhancing transparency about nuclear weapons, and increasing awareness of the humanitarian consequences of nuclear weapons. In addition, the working group, with “widespread support,” called on the General Assembly “to convene a conference in 2017, open to all States, with the participation and contribution of international organizations and civil society, to negotiate a legally-binding instrument to prohibit nuclear weapons, leading to their elimination.”

Mayors for Peace welcomes the outcome of the OEWG, in particular its clear mandate for the commencement of negotiations in 2017 on a treaty to ban nuclear weapons. While we understand that the nuclear-armed states and states under their “nuclear umbrellas” oppose starting these negotiations, the serious sense of crisis shared by the majority of the international community must not be neglected. When government representatives gather at the UN General Assembly’s First Committee to consider the recommendations of the OWEG, they must engage in cooperative dialogue, overcome their political and ideological differences, and bring us closer to achieving a world without nuclear weapons. We especially expect the nuclear-armed states and their allies to take innovative approaches and demonstrate decisive leadership.

Mayors for Peace, with a wide range of civil-society partners, wholeheartedly supports initiatives by world leaders to develop a new global security paradigm based on dialogue, mutual understanding, and cooperation, instead of doomsday threats. We will also intensify our efforts to promote such understanding and cooperation within international society. Now is the time for state and city governments, as well as diverse civil-society actors, to consolidate their efforts and promote the legal prohibition of nuclear weapons, leading towards their total elimination.