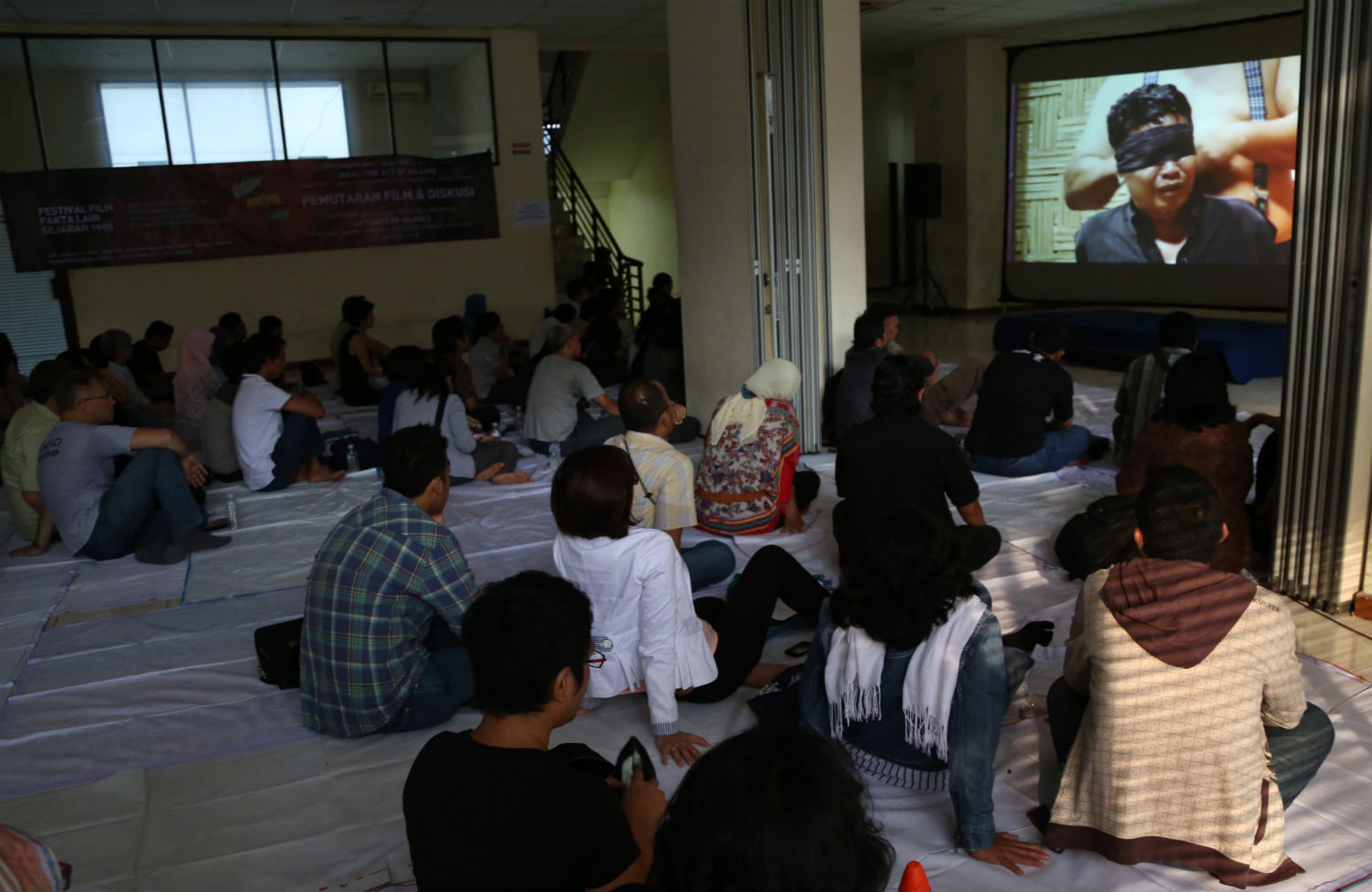 Viewers in Jakarta watch the The Act of Killing, a film that challenges widely held views about the massacre of Indonesian communists in the 1960s. (AP Photo/Tatan Syuflana)

In The Act of Killing, one of the nominees for an Academy Award for best documentary, a group of elderly Indonesian men re-enact their role in the killing of alleged Communists following a purported coup attempt in late 1965. Viewers are rightfully repelled by how little many Indonesians today seem to know or care about the killings, and how those who participated in them not only show no remorse for their actions but are celebrated as national heroes.

“No one cared, as long as they were Communists, that they were being butchered,” recalled one observer, whose nonchalance in the face of mass murder should give us pause. This was no Indonesian, however, but rather a State Department official describing the enthusiastic support of Lyndon Johnson’s administration for the efforts of the Indonesian army and local militias to exterminate the Indonesian Communist Party (PKI), after years of mounting conflict over the direction of the country’s domestic and foreign policy.

The United States was no mere observer in these events. After supporting Indonesia’s independence from the Netherlands in 1949, US officials grew concerned over the growing popularity of the PKI and the increasing radicalism of the mercurial President Sukarno. In the aftermath of a disastrous US-backed regional rebellion in the late 1950s, Sukarno abandoned parliamentary democracy, and the army and PKI emerged as the dominant political forces in a highly polarized Indonesia.

As President Sukarno committed himself to an increasingly radical domestic and foreign policy, the United States and other Western governments began conducting covert operations aimed at provoking an armed clash between the army and the PKI. Following an attempted purge of the army high command by elements of the PKI leadership and a handful of middle-ranking military officers on September 30, 1965, the army struck, using the events as a pretext for a campaign of mass murder aimed at annihilating the PKI and overthrowing Sukarno. With help from a range of civilian militias and some freelance gangsters, including chief protagonist Anwar Congo’s “preman,” the army oversaw the slaughter of perhaps 500,000 unarmed civilians in less than six months.

The US response was enthusiastic. Washington provided economic, technical and military aid to the army soon after the killings started. It continued to do so long after it was clear a “widespread slaughter” was taking place in Northern Sumatra (the site of Joshua Oppenheimer’s film) and other places, and in the expectation that US assistance would contribute to this end. Other nations, in particular the United Kingdom, assisted as well. Not a single US official, however, ever expressed concern in public or private about the slaughter.

“Our policy was silence,” US National Security Adviser Walt Rostow later wrote to President Johnson, a good thing “in light of the wholesale killings that have accompanied the transition” from Sukarno to General Suharto, who would go on to rule Indonesia for thirty-two years.

During Suharto’s rule Indonesians were fed a steady diet of state-sponsored history praising as national saviors the forces who murdered their fellow citizens in 1965–66. After his ouster in 1998, survivors of the mass killings (and the imprisonment of hundreds of thousands of alleged Communists that followed) began pressing for acknowledgment of their suffering, and for redress. These efforts have faced stiff resistance from the Indonesian Armed Forces, some Islamic organizations and others with a shared stake in deflecting critical examination of these events.

But false histories have a way of unwinding. In 2012 Indonesia’s National Human Rights Commission issued a lengthy official report labeling the 1965–66 killings as state-sponsored crimes, though the report was rejected by the Indonesian Attorney General’s office. Indonesia’s House of Representatives is currently considering long-stalled legislation to establish a national truth commission to investigate the killings.

Oppenheimer’s film, though effectively banned from public viewing in Indonesia, has been shown in hundreds of underground venues. It has sparked a raucous debate in the national media about the deep and troubling legacy of the killings, the need for accountability and the consequences of impunity.

It could do so here as well, where the US role has never officially been acknowledged, much less accounted for, though some of the relevant documents have been made available to the public.

It is tempting to view the disturbing events portrayed in The Act of Killing as the crimes of others, men from an inscrutable time and place with different moral sensibilities than us.

But how different, really, are we? Asked about his own role in supporting the extermination of hundreds of thousands of Indonesian civilians, William Bundy, who was assistant secretary of state for East Asian and Pacific Affairs at the time of the killings, told a biographer, “I don’t suppose that certain people would forgive what we did, but I thought that it was eminently justified.”

President Obama has written movingly of the heavy shadow cast by the 1965 killings on his early years in Indonesia. He is thus in an unusual position to speak to both Indonesians and Americans about the need for truth and accountability. Both are essential contributions to the deepening democratization of Indonesia’s political culture, which still bears the scars of Suharto’s reign and the bloodletting that helped him ascend to power.

As Indonesians engage in a broader, deeper debate about the events of 1965–66, the Obama administration could help by pressing the CIA to declassify the so-called “job files” detailing its covert operations during this period. The continued withholding of these documents, now nearly fifty years old, serve no rational national security purpose. President Obama could also acknowledge that the exigencies of the Cold War did not justify support for the mass murder of unarmed civilians or the betrayal of American values.

At the end of The Act of Killing, Anwar Congo remains unrepentant but traumatized by his actions, as the ghosts of his victims continue to haunt his dreams. They haunt our own history as well.