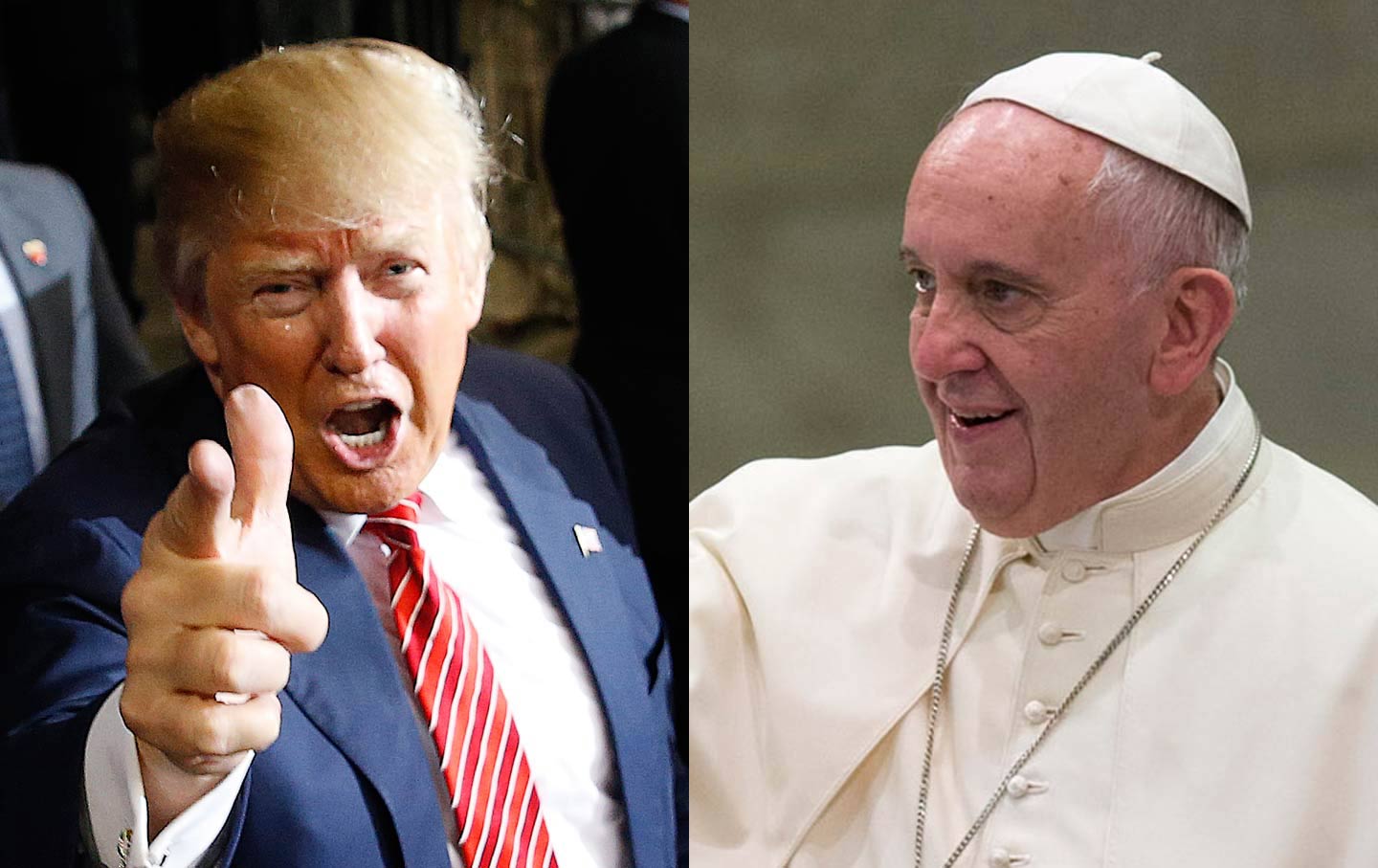 When Pope Francis responded to a question about the extreme anti-immigrant rhetoric that has come to define Republican politics, the 2016 presidential race took a wild turn.

But it wasn’t the pope who turned it.

It was Donald Trump.

Asked about the proposal to build a wall separating the United States and Mexico, which has been a central theme of Trump’s presidential campaign, the pontiff said Thursday, as he traveled from Mexico to the Vatican, “A person who thinks only about building walls, wherever they may be, and not of building bridges, is not Christian. This is not the Gospel.”

“Pope Francis? Trump? It’s not a hard call for me. It’s not even close.” -- Vice President Biden

The pope was not making an endorsement. Nor was he urging Americans to vote for one candidate or another. He was even giving Trump space, specifically explaining, “I say only that this man is not Christian if he has said things like that. We must see if he said things in that way and I will give him the benefit of the doubt.”

However, Trump took the moral pronouncement from a religious leader and immediately turned it into campaign fodder. The perpetually offended candidate, of course, took offense. “For a religious leader to question a person’s faith is disgraceful. I am proud to be a Christian,” the billionaire announced as he campaigned in South Carolina, where he is mounting an over-the-top campaign for the votes of evangelical Christians. “No leader, especially a religious leader, should have the right to question another man’s religion or faith.”

It was immediately noted that Trump has questioned the faith of others, including his closest challenger in a number of polls, Texas Senator Ted Cruz. But to little avail.

If hypocrisy was disqualifying, Trump and most of his opponents would be out of the running. But this is a contest where facts regularly lose to fantasy.

What was far more significant was the next thing that Trump said.

“I’m proud to be a Christian,” he announced, “and as president, I will not allow Christianity to be consistently attacked and weakened, unlike what is happening now with out current president, OK? Believe me.”

There will be a tendency to consider this dust-up as a dispute between the pope and Trump. In that contest, the pope should come out well. There are a lot of Americans who will share Vice President Joe Biden’s view.

“Pope Francis? Trump? It’s not a hard call for me. It’s not even close,” Biden told MSNBC’s Rachel Maddow as the controversy swirled Thursday.

“Is it fair to say if somebody wants to build a wall, by definition, isn’t a Christian?” asked Maddow.

There is something unsettling about politicians positioning as guardians of a particular group’s religious values.

“Well,” Biden replied, “I am not a theologian, nor am I a priest or a minister, but I think building walls is fundamentally contrary to what made this country what it is…. I just think it is totally counter to our tradition.”

“Should we have border security there? Yes. But the idea of the United States erecting a wall for the world to see makes a lie of everything we say about ourselves,” added Biden.

Notice that Biden avoided the religion question and went to the American question.

That’s where we should steer this discussion.

Trump’s reaction to a statement from Pope Francis on a matter of faith and policy—which, it should be noted, is something that religious leaders opine upon quite frequently—went in another direction. The billionaire declared that he would use his presidency to protect Christianity—extending on a theme he has developed in recent weeks. As The Washington Post reports, in a recent appearance in South Carolina, “Trump argued that he would be the better guardian of Christian values, before saying: “Christianity is being chopped away at. Chop, chop, chop.”

Coming from a candidate whose statements about Muslims and mosques have shown little regard for the historic American commitment to religious pluralism, Trump’s “we’re going to protect Christianity” rhetoric has stirred plenty of concern. The group Americans United for Separation of Church and State refers to it as a “troubling” turn in contemporary politics. Americans United warns of “Smearing Secularism: The Ongoing Right-Wing Attack On Religious Neutrality.”

There is nothing wrong with showing concern for any religious grouping that needs protection. But there is something unsettling about politicians positioning themselves as guardians of a particular group’s religious values.

The United States was founded on the premise that there ought be no religious test for those who seek positions of authority, and on the ideal that all practitioners of all religions should be free to follow their faith. To that end, Thomas Jefferson explained to the Danbury Baptists that “Believing with you that religion is a matter which lies solely between Man and his God, that he owes account to none other for his faith or his worship, that the legitimate powers of government reach actions only, and not opinions, I contemplate with sovereign reverence that act of the whole American people which declared that their legislature should “make no law respecting an establishment of religion, or prohibiting the free exercise thereof,” thus building a wall of separation between Church and State.”

People of faith, people with doubts and non-believers ought to be able to agree on the wisdom of Jefferson’s statement, and on the value of a secular politics and governance.

Indeed, a lot of them do.

Millions of Americans identify as non-religious or religiously unaffiliated, and tens of millions more are people of faith who embrace the Jeffersonian view that a “wall of separation” between church and state is good for both church and state. “Still,” notes Freedom From Religion Foundation Co-President Annie Laurie Gaylor, “most candidates and media outlets focus their time on traditional religious groups, so we’re taking action to be more vocal and coordinated as a demographic that should not be ignored.”

The nonpartisan foundation is launching a new “I’m Secular and I Vote” campaign “to encourage supporters to register to vote, attend and speak out on secularism at political events and submit op-eds to local and campus newspapers.”

A radical idea? Hardly. In his brilliant 1960 address to the Greater Houston Ministerial Association, John F. Kennedy announced as a contender for the presidency that “I believe in an America where the separation of church and state is absolute.”

Kennedy would less than two months later be elected as the nation’s first Catholic president. He did not reject his faith, but he did object to the notion that any Catholic prelate or Protestant minister “would tell his parishioners for whom to vote” and his belief that “no [individual should be] denied public office merely because his religion differs from the President who might appoint him, or the people who might elect him.”

Pope Francis has made clear that he is not interested in telling Americans how to vote. Despite the overheated coverage of his remarks, the pontiff was precise in this regard, saying, “As far as…whether I would advise to vote or not to vote, I am not going to get involved in that.”

But there are still too many candidates who are playing the religion card and, seemingly, suggesting that they would do so as president.

What we need are more 2016 candidates who are willing to say, as Kennedy did in 1960, “I believe in an America that is officially neither Catholic, Protestant nor Jewish; where no public official either requests or accept instructions on public policy from the Pope, the National Council of Churches or any other ecclesiastical source; where no religious body seeks to impose its will directly or indirectly upon the general populace or the public acts of its officials, and where religious liberty is so indivisible that an act against one church is treated as an act against all.