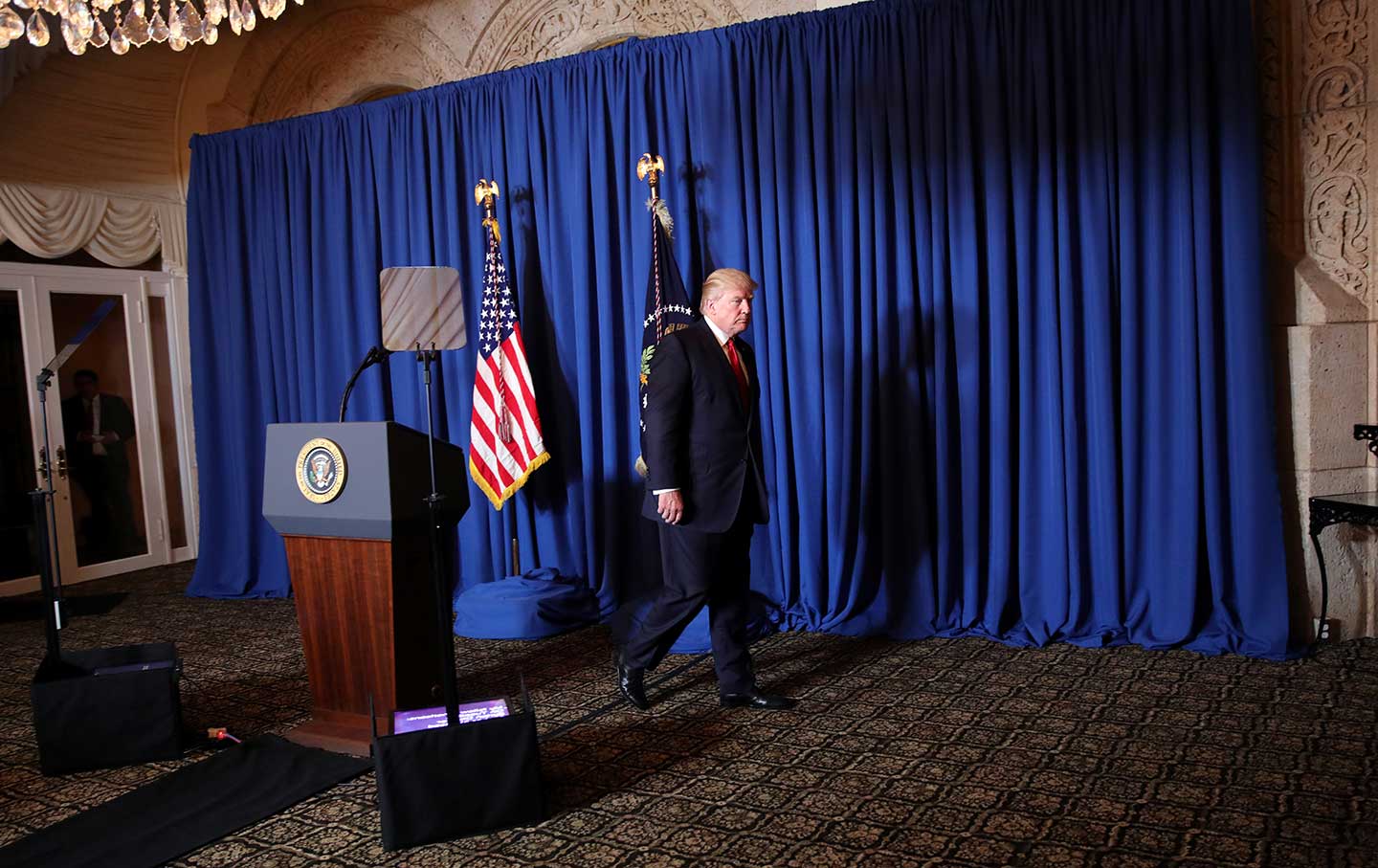 Donald Trump leaves after delivering a statement about missile strikes on a Syrian airfield on April 6, 2017. (Reuters / Carlos Barria)

I was a small child in the early 1950s, but I remember the McCarthy years. I remember watching the Army-McCarthy hearings on our new TV with my mother in the living room, the drapes drawn so the neighbors couldn’t peer in, even though the window looked out on our garden. I remember her refusing to let FBI agents into our house (I was so proud of her). I remember looking out the dining-room window and watching them search our garbage. Some of the things that happened were funny—my parents used to roll their eyes over Cousin Victor, who would only call us from a pay phone. But some weren’t. My father, a lawyer, lost work, as did many others. McCarthyism harmed some 10,000 people—some of them Communists, like my parents, most not—and destroyed quite a few: There were divorces, nervous breakdowns, suicides. And, of course, it made the entire country more conformist, more fearful, and more stupid.1

In a recent Nation piece, Victor Navasky argued that the charges that Russia meddled in the 2016 election resemble the wild accusations and poisonous atmosphere of the McCarthy era. Stephen F. Cohen and several other writers here also use the word “McCarthyism” a lot. Victor probably knows more about the subject than anyone on earth—his book Naming Names is a classic—so I hesitate to disagree with him. But here’s what he overlooks: McCarthyism involved the use of immense state power against a large, shape-shifting mass of fairly powerless ordinary people who, with rare exceptions, had done nothing more than exercise their right to freedom of speech and association. That’s quite different from the calls by Democrats to investigate whether Russian agents hacked the Democratic National Committee at the behest of Vladimir Putin, or whether Trump’s financial interests are tied up with Russia, or whether people like former Trump campaign manager Paul Manafort, former campaign foreign-policy adviser Carter Page, and former national-security adviser Michael Flynn were up to no good. McCarthyism was a miasma of innuendo, divorced from facts. In the matter of Russia and Trump, a small number of individuals are suspected of serious and specific crimes. Moreover, this time around, the state is firmly in the grip of the supposed victims of the witch hunt. Donald Trump isn’t a high-school teacher who once subscribed to The Daily Worker; he is president of the United States.2

Why is it unbalanced, irrational, or crazy to suspect that Russia hacked the DNC, and to want to get to the bottom of it?

Why do The Nation’s discussions of Trump and Russia so often hark back to those old days? “Cold War” is another much-used phrase, suggesting, it seems, that the United States and Russia are close to nuclear war over Ukraine (are they really?), and therefore Trump, that noninterventionist (ha!), might do less damage in the White House than that liberal warmonger Hillary Clinton would have—and also that we should give Putin wide berth to do whatever he wants so that he’ll feel safe (not that he’s doing anything, mind you). Liberals, as so often happens, turn out to be the real enemy: As Patrick Lawrence wrote in February, “There is only one thing worse than this president. I refer to the liberal reaction to his election.” Really? Rachel Maddow, DailyKos, and the Women’s Marchers are all worse than Trump?3

“Kremlin-baiting” is another popular phrase in our pages. I don’t even know what it’s supposed to mean. “Red-baiting” is the use of unfounded or irrelevant accusations of Communist affiliation to smear a person or a project—for example, accusing Martin Luther King Jr. of being a Communist to discredit the civil-rights movement. Since we don’t know whether a Trump-Putin connection exists, “Kremlin-baiting” is a classic example of the proper use of that much-abused term “begging the question”: It assumes what it needs to prove, i.e., that no connection exists or matters. Furthermore, why is it unkosher to speak negatively of the Kremlin? What worthy project does “Kremlin-baiting” attempt to derail? Is Putin so sensitive that he’ll blow up the world if we’re not nice to him?4

Some say focusing on Russia is a distraction that prevents the Democrats from appealing to voters on other issues. Can’t we do both?

Next comes “hysteria.” Derived from the Greek word for uterus, this word has been a favorite way of belittling people who care a lot about something you don’t care about at least since ancient Greece, when mental illness in women was attributed to their wandering wombs. But why is it unbalanced, overwrought, irrational, or crazy to suspect that Russia hacked the DNC? Why shouldn’t one want—okay, really, really want—to get to the bottom of it? A lot of strange things have happened: For example, Michael Flynn was a paid foreign agent of Turkey while working on the Trump campaign. That’s weird. Why did Trump say he knew Putin well and then say he’d never met him? It’s true, as this magazine frequently reminds us, that we haven’t seen the classified evidence the US intelligence agencies used to arrive at the conclusion that Russia was behind the election-related hacks. But that isn’t the same thing as there being no evidence. Congressman John Lewis saw the classified evidence and found it so credible that he refused to attend the inauguration. Was he being hysterical? There is circumstantial evidence as well: If the contact between Flynn and Russian ambassador Sergey Kislyak was so innocent, why did Flynn lie about it? Clearly, there needs to be an investigation—which, indeed, The Nation has called for in an editorial, albeit one that mostly debunks the possibility that anything happened or, if it did, that it mattered.5

One last keyword: “distraction.” Robert L. Borosage, Greg Grandin, and others claim that focusing on Russia distracts Democrats from accepting the blame for Hil lary Clinton’s defeat and appealing to voters by attacking Trump’s terrible policies. But why can’t we do both? Even Bernie Sanders, no apologist for Hillary, has asked what Russia might have on Trump. In fact, alleged Russian interference in the election has been a pretty successful issue for the Dems. A Quinnipiac poll at the end of March found that 66 percent of Americans support an investigation by an independent commission, and 65 percent think the alleged Russian interference is “very important” or “somewhat important.” Keeping the heat on the issue has also helped destabilize the Trump operation—Manafort and Flynn are gone, and Attorney General Jeff Sessions has recused himself from any investigation into Russian meddling, as has Republican Congressman Devin Nunes, a Trump ally and chair of the House Intelligence Committee. I wouldn’t call that distracting; I’d call it fighting to win.6

I must say that I don’t understand this magazine’s adamant skepticism about the charges: If we don’t know what happened, what it entailed, and how far it extended, how can we be so sure that it didn’t matter? And I don’t understand the repetition of these particular words and historical tropes. It’s as if the fact that Russia occupies some of the same geography as the Soviet Union has trapped The Nation in the defensive attitudes of an earlier era. But Russia is not a communist country; it is a capitalist kleptocracy run by an autocrat and an enemy of human rights. If there’s a lingering legacy of McCarthyism around this issue, it doesn’t emanate from liberals but from the left, where some kind of subconscious sympathy with the state formerly known as the Russian Soviet Federative Socialist Republic curiously persists even though the place now embodies everything they oppose. If the country accused of the hack was, say, Pakistan or Saudi Arabia, would we be talking about McCarthyism then?7

Listen to Katha Pollitt on the Start Making Sense podcast.