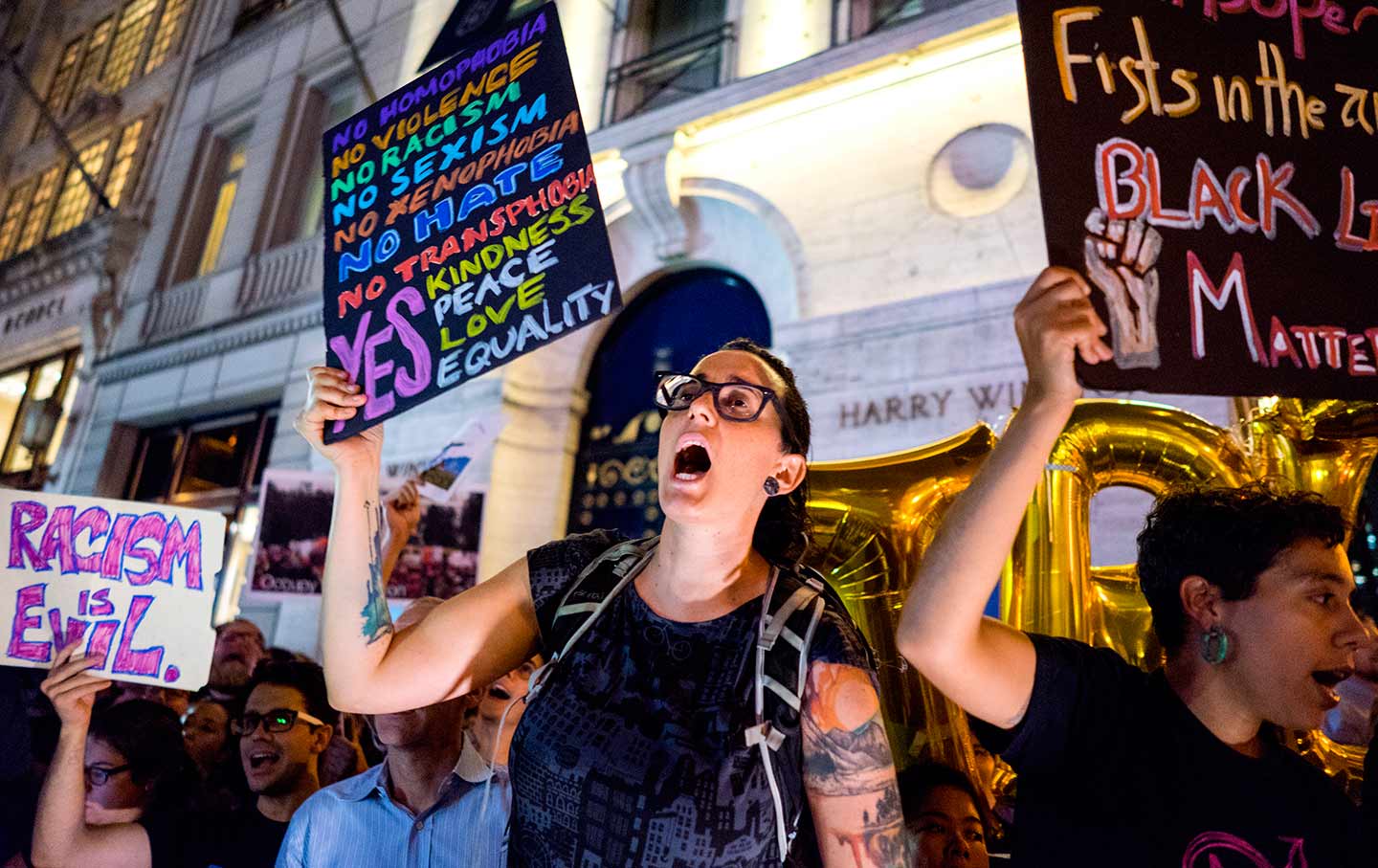 Talk about bad timing. Even as white supremacists and neo-Nazis massed in Charlottesville, complete with torches, shields, MAGA hats, sticks, and guns, even as one participant allegedly ran his car into a crowd of peaceful counter-demonstrators, killing Heather Heyer, a 32-year-old paralegal, and injuring some 19 others, The New York Times was publishing an op-ed warning against taking the whole Trump thing too seriously. “Trump Isn’t a Threat to Our Democracy. Hysteria Is,” write the historians Samuel Moyn and David Priestland. “Since Donald Trump’s election, the United States has been gripped by tyrannophobia. Conspiracies against democracy are everywhere; truth is under siege; totalitarianism is making a comeback; ‘resistance’ is the last refuge of citizens.”

Hysteria? Tyrannophobia? Those are fighting words. You’d think the Times would have learned its lesson with Michael Kinsley’s much-mocked and quickly ended op-ed series, “Say something nice about Donald Trump.” Still, I see what Moyn and Priestland are getting at. It’s easy to find posturing progressives and even a few Republicans, waving the Constitution as if the only problem was the mysterious takeover of government by a nuclear-wielding madman, and if we can just get rid of him we can go back to normal. We do need to think hard about how Trump happened and what it means for our nation and our future. It’s unfortunate, though, that the authors mention economic inequality as the only underlying issue that must be addressed and not the racism, xenophobia, misogyny, and good old-fashioned anti-Semitism that were so vividly on display in Charlottesville. “Economic inequality” conceals as much as it explains. After all, the worst victims of economic inequality are people of color, but Trump got few of their votes. You didn’t see black and brown faces in the crowd chanting “Blood and Soil” and “Jews will not replace us.” If you spent time on the Daily Stormer website, you wouldn’t have found a lot of complaining about low wages and disappearing factory jobs. Mostly it was men complaining that white women are shirking their racial duty to lose weight and have babies.

It’s true that a lot of people are extremely upset about the possibility that the Kremlin meddled in our election on behalf of Donald Trump. I am one of them. Maybe some of us are getting carried away, although actually the craziest claims are on the other side; cf. Seth Rich Truthers. I’m always wary when people start trumpeting their patriotism—as Moyn and Priestland point out, that has an unfortunate history. But hyper-emotional venting about Trump is hardly the main problem we face right now. Granted, Trump can’t go full fascist: cancel elections, murder his rivals, round up opponents, and put them in concentration camps. But democracy, such as it is, really is under threat.

It is not hysterical to note that Trump is a racist of long standing: Even before he spent years promoting the ridiculous notion that President Obama was not born in the United States, he was calling for the death penalty for the five young black men accused of the rape of the Central Park Jogger—nor did he apologize when, years later, those men were exonerated by another man’s confession. He ran as a racist, he was elected as a racist, and his White House features racists and nativists in high positions: Steve Bannon, Steven Miller, Sebastian Gorka.

It is not hysterical to note that Trump is a racist of long standing. He ran as a racist, he was elected as a racist, and his White House features racists in high positions.

It’s not hysterical to fear that his attorney general, Jeff Sessions, will use bogus claims of voter fraud to purge people of color and other Democratic–leaning voters from the electoral rolls. In what sense will America be a democracy if people of color can’t vote? The 2020 redistricting could cement Republican hegemony for decades.

Our professionally staffed federal agencies—that government bureaucracy people love to rail against—are a bulwark against demagoguery and corruption. It is not hysterical to note that Trump is intentionally undermining them. The Washington Post reports that he has installed a “shadow government of political appointees” in cabinet agencies to act as his “eyes and ears.” His administration has rolled back regulations and left crucial positions unfilled. Under the direction of Scott Pruitt—a climate-change denialist—the Environmental Protection Agency alone has taken down over 1,900 Web pages of public information (including its extensive page on climate change) and canceled the collection of data on the oil industry and air pollution. Even the Census is at risk. With some exceptions, Trump’s cabinet appointments are know-nothings who oppose the very purpose of their office, and who are busily reducing their departments to rubble. The last secretary of energy was a Nobel Prize–winning physicist; the current one is Rick Perry. Posts dealing with women’s health are now staffed by ideologues who oppose abortion and, in some cases, even contraception. The damage these people can do in four years is enormous. And I haven’t even mentioned the legions of reactionary federal judges Trump will place on the bench.

Moyn and Priestland take comfort that “Starting with the Trump administration’s original version of the travel ban, the president’s most outrageous policies have been successfully obstructed, leaving largely those that any Republican president would have implemented through executive order.” I’m not so sure that any Republican would propose cutting legal immigration in half, curbing family reunification, and limiting most newcomers to educated professionals and rich people, nor am I confident that any Republican would be threatening to nuke North Korea. You have to be gazing down from a very high and misty mountaintop not to notice the distinctive features of the Trump administration: the daily lies about mathematically undeniable facts (such as who got the most votes in the election), the shambolic White House staff, the vicious tweets, the family grifting, the shameless use of his businesses and properties to milk money from the government, the constant delegitimizing of the news media and mainstreaming of right-wing conspiracy nuts like Alex Jones, the egomania and general contempt for others. Just this week Trump proved unable to condemn a fascist mob without equivocation. From racism and pussy-grabbing to the cultivation of ignorance under the guise of populism, it is hard to think of a way in which Trump has not evoked and enabled our worst national demons.

If it’s true that Trump’s worst impulses have been foiled, one major reason is the massive resistance Moyn and Priestland mock.

But if it’s true that Trump’s worst impulses have so far been foiled, one major reason is precisely the massive resistance Moyn and Priestland mock. Would judges have over-ruled the travel ban without the howls of outrage in the media and the crowds converging on the airports? Would thousands of Democratic women be running for office to protect reproductive rights if not for the Women’s March? Would Mueller still have a job investigating Russiagate (and Trump’s finances) if large numbers of people were not keeping the story alive in the press, on TV, and on social media?

There’s a German proverb, “The food is never eaten as hot as it is cooked,” meaning, roughly, that things are never as bad as they look. Any German will tell you there are limits to that bit of folk wisdom. Sometimes it’s right to go on full alert. Sometimes a little panic is better than complacency. As Heather Heyer posted on her Facebook page, “If you’re not outraged, you haven’t been paying attention.”