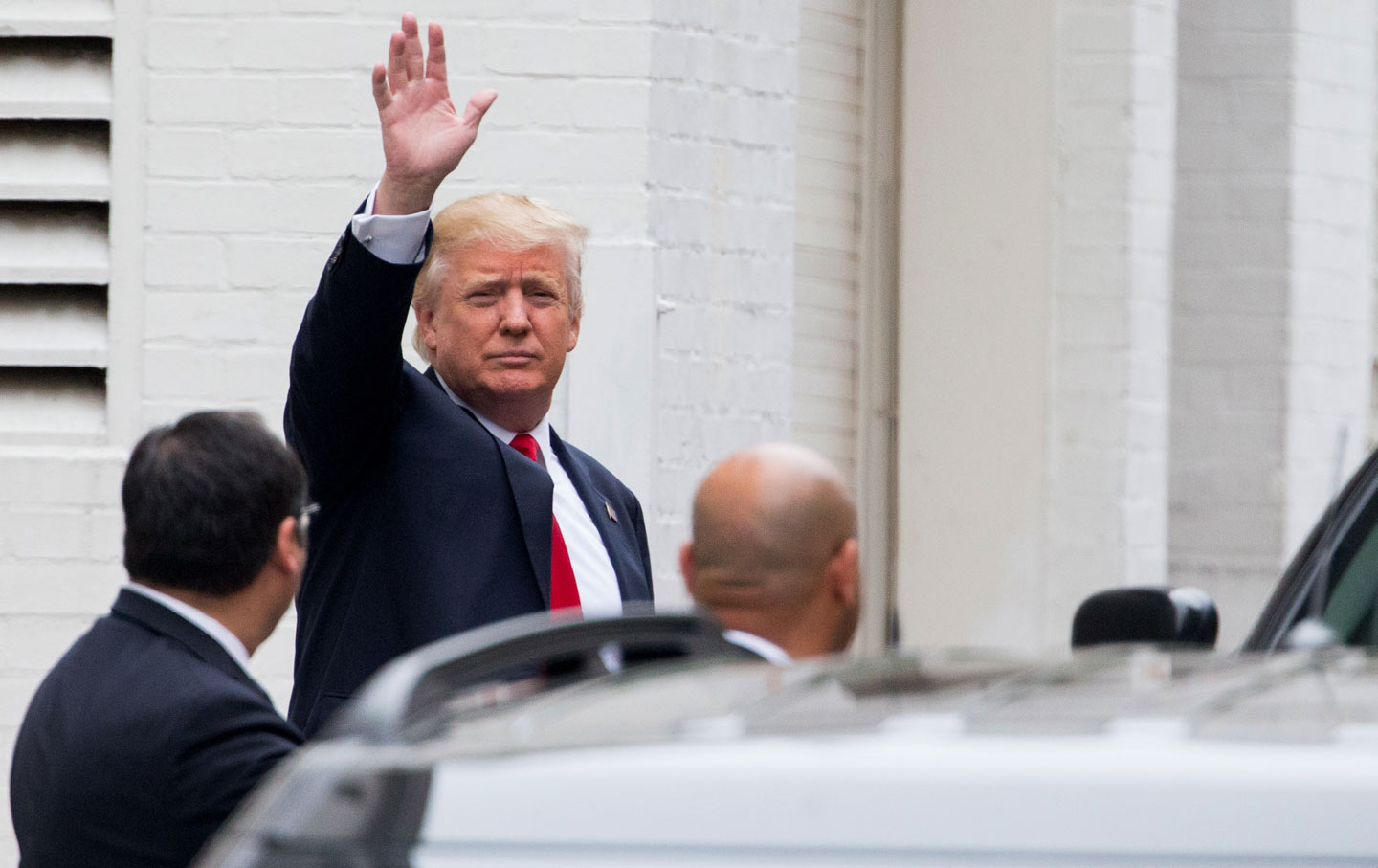 Donald Trump waves as he arrives for a meeting with House Speaker Paul Ryan, at the Republican National Committee Headquarters on Thursday, May 12, 2016. (AP Photo / Andrew Harnik)

Paul Ryan could have concluded his meeting with Donald Trump by issuing a bold, principled statement that put the honor of the 162-year old Republican Party ahead of personalities, and that put the good of the nation ahead of petty partisanship.

Ryan could have found the words.

The speaker of the House could have borrowed a few lines from his Republican colleague from Wisconsin, Congressman Reid Ribble, who said last fall, “I am not obligated to support a bad candidate from any party. I will not support Donald Trump for president of the United States, no matter what the circumstances.”

“I reject wholeheartedly the Trump campaign for president. I think it works at our most base interests, it’s prurient,” explained Ribble, who represents northeastern Wisconsin, where abolitionists and “free-soil” land reformers forged a Grand Old Party (after its founding just a few miles outside Ribble’s district in the small city of Ripon) and shared the faith of John Fremont and Abraham Lincoln in “the necessity of the organization and [the] perpetuation of the Republican party, and that the causes which called it into existence are permanent in their nature…”

“This was our first meeting, but it was a very positive step toward unification.” —Trump and Ryan

Ryan could have echoed his Republican colleague from Virginia, Scott Rigell, who has said: “My love for our country eclipses my loyalty to our party, and to live with a clear conscience I will not support a nominee so lacking in the judgement, temperament and character needed to be our nation’s commander in chief. Accordingly, if left with no alternative, I will not support Trump in the general election should he become our Republican nominee.”

Ryan could have acknowledged the concerns of his Republican colleague from Florida, Carlos Curbelo, a father of two who says of Trump: “This man does things and says things that I teach my six and three-year-olds not to say. I could never look them in the eye and tell them that I support someone so crass and insulting and offensive to lead the greatest nation in the world.”

“I have no plans of supporting either of the presumptive nominees,” Curbelo declared a few days ago.

Ryan could have said something like that. He could have simply admitted that South Carolina Senator Lindsey Graham was right last week when he explained after Trump was dubbed the party’s “presumptive nominee” that “I just really believe that the Republican Party has been conned here, and this guy is not a reliable conservative Republican,”

That did not happen.

The speaker and the billionaire met Thursday at the offices of the Republican National Committee Thursday, and RNC chair Reince Priebus said things went “great.”

Paul Ryan is now talking about the “same core principles” he shares with Donald Trump.

The close confidant of the speaker described the meeting as “a very positive step toward party unity.”

In a joint statement, Ryan and Trump declared:

The United States cannot afford another four years of the Obama White House, which is what Hillary Clinton represents. That is why it’s critical that Republicans unite around our shared principles, advance a conservative agenda, and do all we can to win this fall. With that focus, we had a great conversation this morning. While we were honest about our few differences, we recognize that there are also many important areas of common ground. We will be having additional discussions, but remain confident there’s a great opportunity to unify our party and win this fall, and we are totally committed to working together to achieve that goal. We are extremely proud of the fact that many millions of new voters have entered the primary system, far more than ever before in the Republican Party’s history. This was our first meeting, but it was a very positive step toward unification.

There’s no real rejection of Trump here. The formal endorsement is still to come. But, as #NeverTrump Republican Bill Kristol (who referred to Trump’s trip to Washington as “triumphal”) says, “unification is capitulation.”

The Trump-Ryan meeting was the latest step in a totally predictable dance between a career politician and political newcomer around what Ryan refers to as their “same core principles.”

No one should be surprised by Ryan’s choice.

Over the past quarter-century—from the days when he packed his Ayn Rand books and headed for Washington to become an aide to Wisconsin Republican Senator Robert Kasten—Ryan has put party loyalty first. Yes, Ryan and Trump have some stylistic differences; the speaker is closely aligned with Wall Street interests and corporate donors, while Trump has positioned himself as something of a populist.

But even as he has occasionally distanced himself from the billionaire’s most extreme expressions of xenophobia and bigotry, Ryan has repeatedly stated that he intends to support the Republican nominee this year.

Despite last week’s “not ready” to endorse theater, Ryan is still saying pretty much the same thing.

“Can we unify around our common principles…?” Ryan asked at a press conference following his meeting with Trump. Then he answered his own question: “I am very encouraged that we can put that together.”

How encouraged? Ryan and Trump are both talking now about how the speaker will chair the Republican National Convention in Cleveland that will nominate the billionaire.

Ryan is not rejecting Trump, as more principled Republicans have. All indications from Thursday are that the speaker is preparing—perhaps with a few more grumbles and grimaces, but also with lots of “extremely proud…” and “very positive…” talk about how “great” party unity is—to serve as the engineer of that Trump train.