Ishmael Reed has spent much of his career rewriting American history. His best-known novel, 1972’s Mumbo Jumbo, is an ironic reimagining of 1920s Harlem as the focal point in a centuries-old battle between two shadow forces: a group representing European institutional order and Jes Grew, a virus/movement/pleasure-seeking principle originating among black artists. A subplot about the much-speculated black ancestry of Warren G. Harding ends with his assassination after he’s suspected of being infected with Jes Grew. More real-life figures, as well as barely disguised stand-ins for Madam C.J. Walker, Malcolm X, and Carl Van Vechten, turn up in the course of the quest for a long-forgotten text from ancient Egypt.

It’s all part of what Reed once called “artistic guerrilla warfare against the Historical Establishment.” In Mumbo Jumbo, he wants his reader to question how—or even if—we remember the US occupation of Haiti, the many facets of the Harlem Renaissance, and precolonial African culture and philosophy. The establishment, as he puts it, is too invested in the supremacy of white culture, white institutions, and white heroes to notice the contrary currents of black art, thought, and social life running underneath. “They can’t tell whether our fictions are the real thing or whether they’re merely fictional,” Reed observes; hence he rewires the past, transforming a stand-in for Van Vechten, an exploitative white patron of Harlem artists, into a 1,000-year-old veteran of the Crusades in disguise. “This is what we want,” Reed says. “To sabotage history.”

The (justified) paranoia animating Mumbo Jumbo is the forebear of the ghosts plaguing the creator of the musical Hamilton in Reed’s latest play, The Haunting of Lin-Manuel Miranda, directed by Rome Neal at the Nuyorican Poets Cafe through June 16. In the two-act play, an Ambien-addled Miranda is visited by the historical figures from which Hamilton draws, as well as the ones that it excludes: Ben, the enslaved man owned by Alexander Hamilton’s sister-in-law; Ben’s unnamed mother; “Native American Man” and “Native American Woman”; an anonymous white indentured servant; a runaway from the plantation of Hamilton’s in-laws; and even Harriet Tubman. A relentlessly cheery juggernaut, Hamilton promised to liven up the familiar textbook history, injecting song, dance, mild sexual intrigue, and—above all—color into the life of its subject. The Haunting of Lin-Manuel Miranda, by contrast, takes the play, its creator, the biography it’s sourced from, and the founding father himself to task; by the end of Reed’s play, we’re supposed to believe the ghosts have convinced Miranda of the error of his project.

The idea for the play clearly percolated in Reed’s head for some time. The month that Hamilton moved to Broadway in 2015 (six months after it opened), Reed denounced the musical for giving the genocidal men who wrote America into existence a veneer of social-justice legitimacy by means of an overwhelmingly nonwhite cast. (Hamilton’s lone white actor plays King George III, whose reputation gets mildly rehabilitated in Haunting.) Beyond the politics, Reed’s frustration with the production is understandable as well: The verses to Hamilton’s popular songs are often unbearably corny, as one of his characters observes, and the inflated ticket prices lead to astronomical profits—which reflect the uncomfortable fact that the play appeals to seemingly everyone (and apparently especially the worst people). 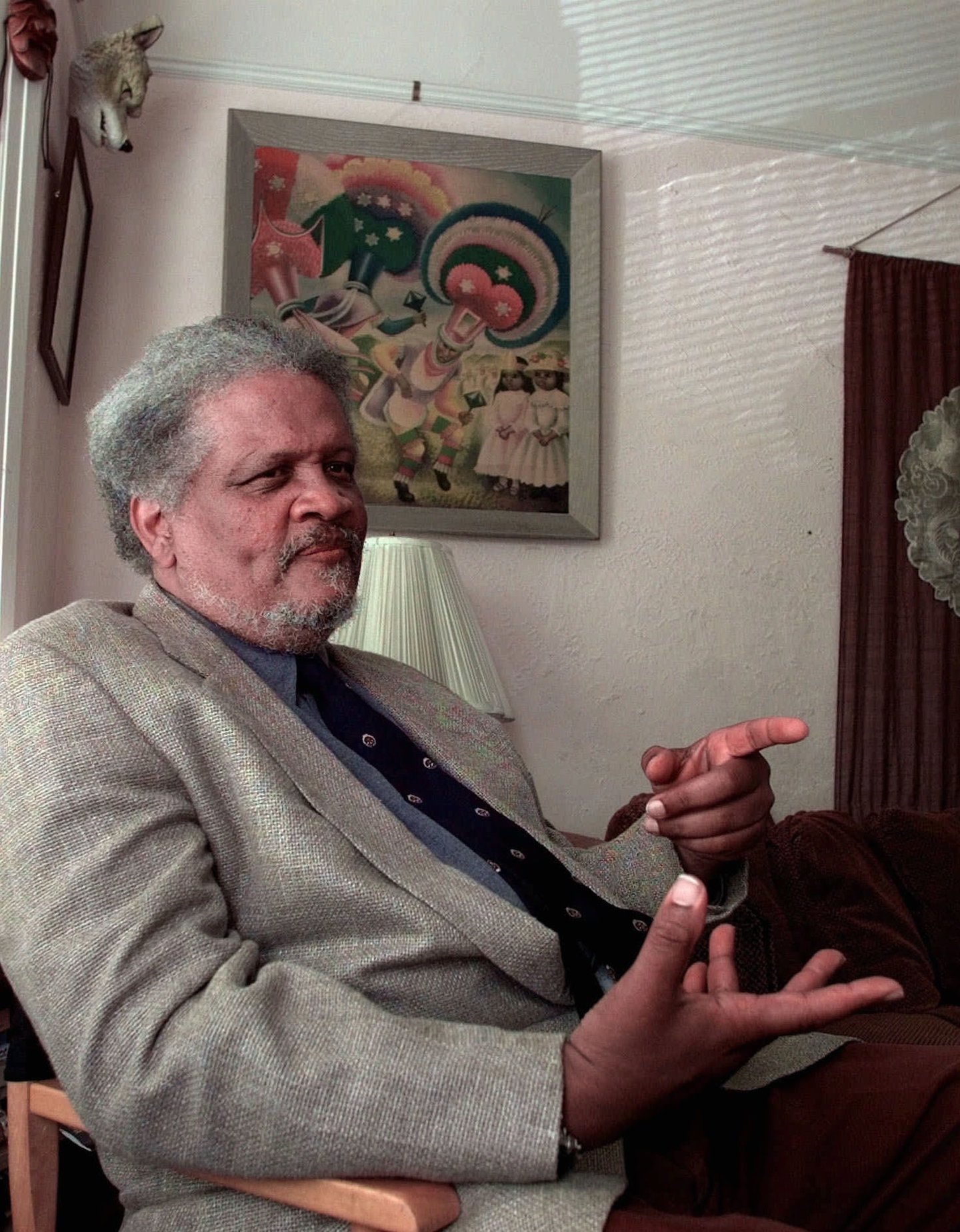 And yet the intervening years seem to have given Reed more factual ammunition than artistic inspiration. The madcap frenzy of Mumbo Jumbo and his subsequent novels has given way to didactic monologues that take up entire scenes. The audience might hope for drug-induced dream sequences that are a bit more hallucinatory or at least more like a haunting. Characters recount their stories to Miranda—and by extension the audience—but evoke none of the excitement that a high-school sophomore feels when opening A People’s History of the United States for the first time. After all, Hamilton doesn’t appeal to absolutely everyone; anyone with a personal or political interest in the afterlife of slavery is unlikely to be convinced of the wise nobility of plantation owner George Washington or mollified by the depiction of the already defamed Thomas Jefferson as a villain. Maybe we all only skimmed the first part of the Declaration of Independence in grade school, but a certain kind of reader remembered its warning about “merciless Indian savages.” Watching Ben scold an astounded Miranda about Hamilton’s indifference to slavery is a strong but shallow catharsis.

Reed retains some sympathy for Miranda. In Ben’s reading of the situation, the Hamilton creator has been duped by influential white men; his main crime was not pushing past the first source presented to him. He is spared from Ben’s vitriol: “These white historians are nothing but tarnish removers,” the enslaved man explains to Miranda. “They remove all of the crud from the reputations of the founding fathers and apply polish until these reputations glow like a waxed floor.” The real villain here is Ron Chernow, the author of the 800-page Hamilton biography that inspired Miranda’s musical and a Yale-educated, Pulitzer Prize–winning “learned white man,” as Reed’s Hamilton puts it (approvingly). “Look, Miranda,” Hamilton says, as Miranda stands bewildered by his revelations. “You, me, Chernow, and your investors are benefiting from your musical. As they say nowadays, chill.”

Suzan-Lori Parks Dares to Get Into Your Head

Chernow’s appearance, when it comes near the end of the play, is also one of its funniest moments, a hint of Reed’s manic satiric energy. (He’s played, successfully, by Tom Angelo as the creepy mortician of American history, but a hammier reading might have been more in line with the text.) Chernow is the most cynical character in a play full of people who have been displaced and enslaved; he’s also often, unfortunately, right. (He’s the one who describes Hamilton’s lyrics as corny.) “This Puerto Rican American is raking in the gold, and what a clever idea, having black people play the roles of white people who whipped the living daylights out of black people and raped African women,” Chernow hums to himself as he prepares to meet an irate Miranda. “Do you think American Express hired you because they want a revolution?”

There’s no need for white villains like Reed’s Chernow to be subtle or nuanced; real-life white villains, like the ones Hamilton’s actors called out from the stage, rarely bother. What, after all, does a fixation on the founding fathers lead to these days except constitutional originalism, the Tea Party, and Minutemen vigilantes patrolling the border? But when Chernow equivocates to Miranda’s face, he makes his liberal respect for Hamilton seem reasonable. The audience understands why the narrative is persuasive and why so many people are desperate to believe it.

It’s unfortunate that the ghosts of the enslaved, indentured, and indigenous aren’t quite as convincing. One would hope that, in death at least, they could assume some of the detached disgust that makes Chernow’s character succeed, in an echo of the black humor that enlivens so much of Reed’s work. The admirable task that Reed has set himself is to undo the damage that Hamilton has caused, but his tactic—replacing the artificial jollity of Miranda’s musical with sobering reminders of America’s bleak past—leaves the audience longing for the satire that snapped in all directions in Mumbo Jumbo. Hamilton is nauseatingly earnest, and it hurts a bit to see Reed’s Ben pleading in good faith with Miranda to see history from his perspective. 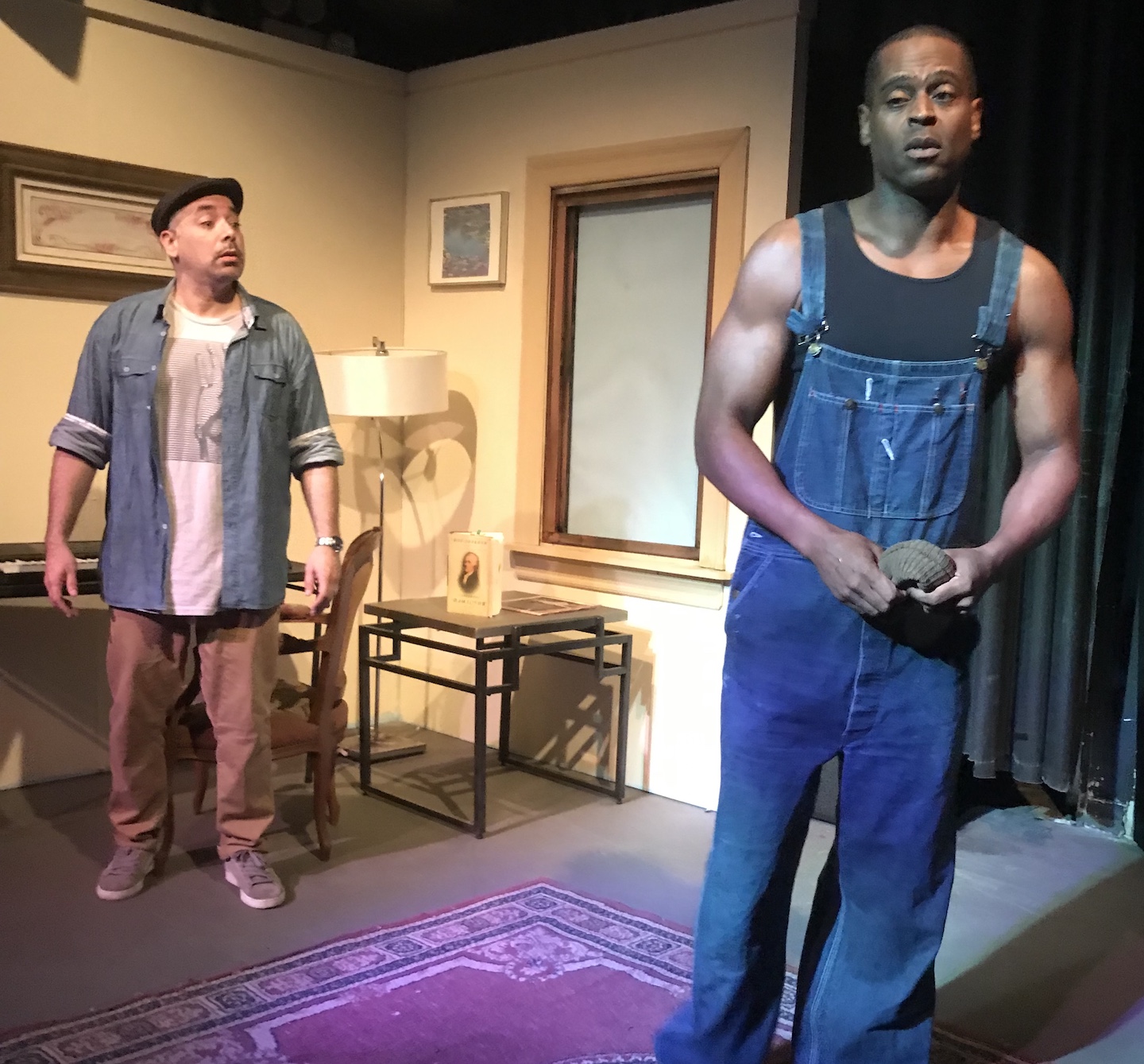 Turning what are essentially history lectures into riveting theater is a tall order for most actors, but the cast is for the most part up to the challenge. The luckiest of them is Robert Turner, who, as George Washington, gets to be a villain—Reed’s specialty, apparently. Like the actor playing Washington in Hamilton now, Turner is black; Rome Neal, the director of the play, seems to have followed Miranda’s example in largely race-blind casting. Washington is the first character to appear to Miranda (played by Jesse Bueno), and Turner sets an energetic scene, milking his laugh lines and bringing a thrilling, unpredictable edge to his grandstanding. Hamilton is played cleverly by Zachary Clarence with a familiar, sinister, slope-shouldered nerdiness. But the rest of the ghosts have less room for their character building. Roz Fox as Tubman is particularly terrific, but the audience is left to imagine what she could have done with livelier material.

There’s a clear line from Reed’s scorn of white historiography in the early ’70s to his frustration with Hamilton’s reliance on a white historian’s work today. But it’s not hard to draw a fuzzy line from Hamilton back to Mumbo Jumbo, either. Both works attempt, with varying degrees of success, to reimagine the history taught in school as one in which people of color have power; they both make much of the marginal whiteness of canonical American figures and feature amusing cameos by famous historical personages. Miranda owes a debt to the 19th-century people his musical has steamrolled and perhaps to some 21st-century ones as well.

It’s already impressive that Reed squared up to Hamilton. That he does it in a relatively accessible way, at one of New York’s great community institutions, is more admirable still. One hopes that the title was a prophecy and that Miranda has taken note; perhaps he is chastened, even if he’s unlikely to follow the course that Reed sets out for him at the end of the play. And yet, though there should be nothing more rewarding than watching an underdog take down an alpha, The Haunting of Lin-Manuel Miranda feels somewhat more quiescent than it has to be. Reed’s review of Hamilton ended with a lament: “Amiri Baraka, the master of irony, your voice is missed.” It still is.