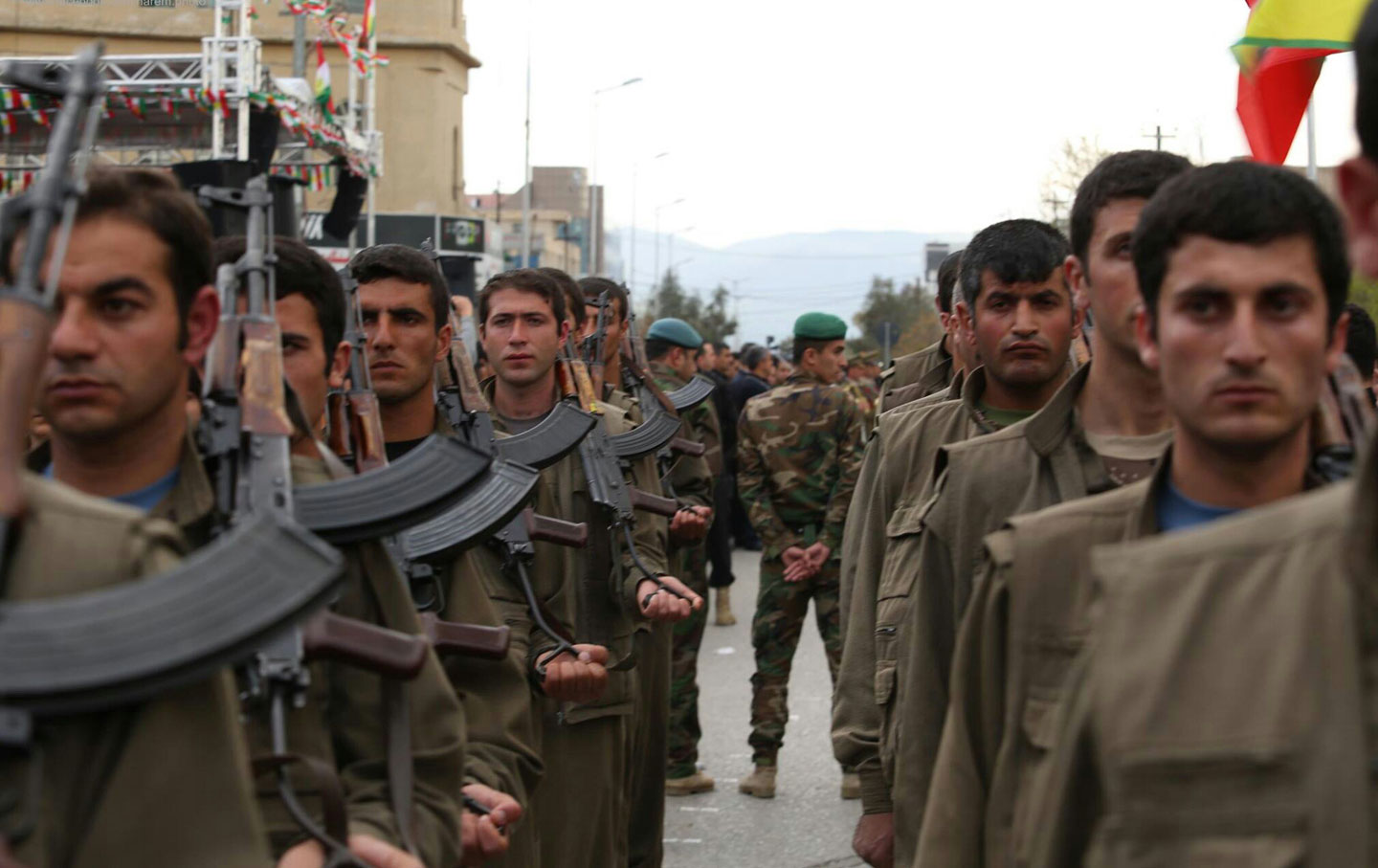 On the evening of June 7, Ahmet Yildiz celebrated. The leftist, pro-Kurdish People’s Democratic Party (HDP), which he supported, had succeeded in breaching Turkey’s unusually high 10 percent election threshold—a remnant of the Constitution drawn up by the military junta after the coup in 1980—and entered Parliament with 80 MPs, granting Turkey’s large Kurdish minority an unprecedented political voice.

“The streets of Cizre were full of people who were happy,” Yildiz (a pseudonym, to protect his identity) recalled. “We felt that a new time had come for us, that we were closer to peace than ever before.” But three months later, the streets of his neighborhood in Cizre, in the Kurdish region of eastern Turkey, are almost deserted. Residents have hung up sheets and blankets to protect themselves against sniper fire, and most roads into the district have been blocked by trenches and barricades. In early September, Turkish security forces launched a massive security operation against the YDG-H, the urban wing of the outlawed Kurdistan Workers’ Party (PKK), leaving at least 21 residents dead, including children and a 75-year-old man. While the governor of Sirnak province claimed that only PKK militants had been killed, local human rights groups said that most of those killed were civilians.

In Cizre, trust in the Turkish government is gone. “Our victory feels poisoned,” Yildiz said. “I was full of hope after [the HDP’s] success in the elections, but now I don’t have much hope left. This government does not want peace, and all [Turkish President Recep Tayyip] Erdogan cares about is how to stay in power.”

Many others in the predominantly Kurdish southeast agree. The Justice and Development Party (AKP) suffered its biggest setback when voters denied the party an absolute majority for the first time since it came to power in 2002, therefore also snubbing Erdogan’s plan to turn what had been a largely ceremonial post into an executive presidency. The AKP’s loss of a majority government was not least due to the HDP’s success after the newly established leftist grouping had managed to convince thousands of conservative Kurds, all of them previously AKP voters, to cast ballots in their favor instead.

The latest clashes were arguably triggered by the suicide bombing in July that killed 33 Kurdish and Turkish activists in Suruç, a small town on the Turkish-Syrian border. The Turkish government blamed the Islamic State, or ISIS, for the attack, but many Kurds in Turkey pointed angry fingers at the ruling AKP, long perceived as actively supporting ISIS against the armed Kurdish opposition in Syria. Then, following the murder of two Turkish policemen by Kurdish militants, the government in Ankara launched airstrikes on PKK positions in northern Iraq and Turkey. In response, the PKK resumed attacks on security forces in earnest. Hundreds of Kurds suspected of links to the militant group were detained in nationwide sweeps.

“The government wants to punish us…because we voted the wrong way.” —Kurdish activist

Now the violence risks spiraling out of control, leaving many wondering if Erdogan aims to garner support for the AKP by letting the country descend into chaos, presumably demonstrating that only a majority-AKP government would be able to secure peace and prosperity. After the collapse of coalition talks, with many critics pointing again at Erdogan as the culprit, snap elections were scheduled for November 1, but many fear that amid the growing violence, along with a rapidly deteriorating security and human rights situation, free and fair polling might become impossible.

“The government wants to punish us,” Yildiz said. “They punish us because we voted the wrong way. We are afraid that they want to push the HDP below the 10 percent hurdle, and force them out of Parliament again.” Erdogan and his AKP have repeatedly vilified the HDP, accusing party members of collaborating too closely with the PKK. Several HDP politicians have been detained, and some, including Leyla Imret, the 28-year-old co-mayor of Cizre, were dismissed on charges of “promoting terror and inciting hatred.” Imret had called the blanket operation against Cizre a “civil war.”

Violence has risen to worrying levels, unseen in Turkey for two decades. Hundreds have died since the cease-fire between the Turkish state and the PKK collapsed in July, putting an end to the fledgling peace process, started in 2012, that aimed to finish a bloody conflict that had killed at least 30,000 people since it began in 1984.

“We had no water and no electricity,” Yildiz recalled of the Cizre operation. “We were running out of food. Garbage was piling up in the streets in the summer heat. But nobody dared to go out. We did not leave the house for days. The whole city was under siege—we had suddenly collectively become the enemies of the Turkish state.”

Turkish security forces have launched similar operations in other towns all over the predominantly Kurdish southeast, such as Silopi, Yüksekova, Diyarbakir, and Silvan, where the YDG-H is strong. But local residents are often caught in the crossfire, and blanket curfews imposed on whole towns endanger emergency care for those in need of medical assistance. In Cizre several people, including one 35-day-old baby, are said to have died because their families were unable to reach the hospital.

“How are we to ever trust a government again that lets small children die like that?” Yildiz asked. Local human rights groups fear that a security-law package passed earlier this year, granting police the right to resort to firearms instead of non-lethal crowd-control measures, is to blame for the increased civilian death toll. “They used to come with tear gas; now they immediately use automatic rifles,” said Emirhan Uysal, head of the Human Rights Association (IHD) in Sirnak. “Such operations endanger civilian lives, and we are afraid that more will die if this continues.”

Emma Sinclair-Webb, senior Turkey researcher for Human Rights Watch, said that the security package had an important psychological impact on both sides. “On the Kurdish side, the insistence of the government to push through the highly disputed security package eroded a lot of confidence and was seen as undermining the ongoing peace process,” she said. “To the security forces, it provided psychological backup and gave them a green light to use firearms.” She also criticized the lack of legal oversight in the security operations launched in several cities in the southeast since July. “These operations are conducted without any judicial control, solely on the basis of direct orders from Ankara and regional governors,” Sinclair-Webb said. “But without oversight by prosecutors over these blanket curfews, these operations remain closed to all scrutiny and legal challenge, which is a very worrying development.”

As tensions have risen in the past weeks, pro-government groups have taken to the streets, attacking Kurdish businesses and setting fire to HDP party offices all over the country. A mob in Istanbul that included one AKP deputy launched an assault against the daily newspaper Hürriyet, and the pressure on journalists, already considerably high in Turkey, has risen further. Several Turkish journalists have been fired from their newspapers for covering the clashes and the aftermath of security operations in Kurdish towns. In the past month, four foreign reporters have been detained while covering the Kurdish conflict. Three of them have already been deported, while one Iraqi reporter working for VICE News is still being held in a Turkish jail. One news magazine and an opposition news organization have been raided, and some of their staff are now being investigated on terrorism charges. Court cases have been opened against many more on the grounds of “insulting the president.”

Human rights activists underlined that the prosecution of journalists and the lynch mob tactics against media organizations the government does not like have fueled fears of a skewered and unfair run-up to the November elections. Few analysts believe that the AKP will be able to regain a parliamentary majority at the polls, but in Cizre, many are worried that the violence will escalate further. “It is difficult to believe in peace while our neighbors and friends are under fire,” one female resident said. “But peace is all we want, and peace is what we will strive for, no matter what [the government] does.”