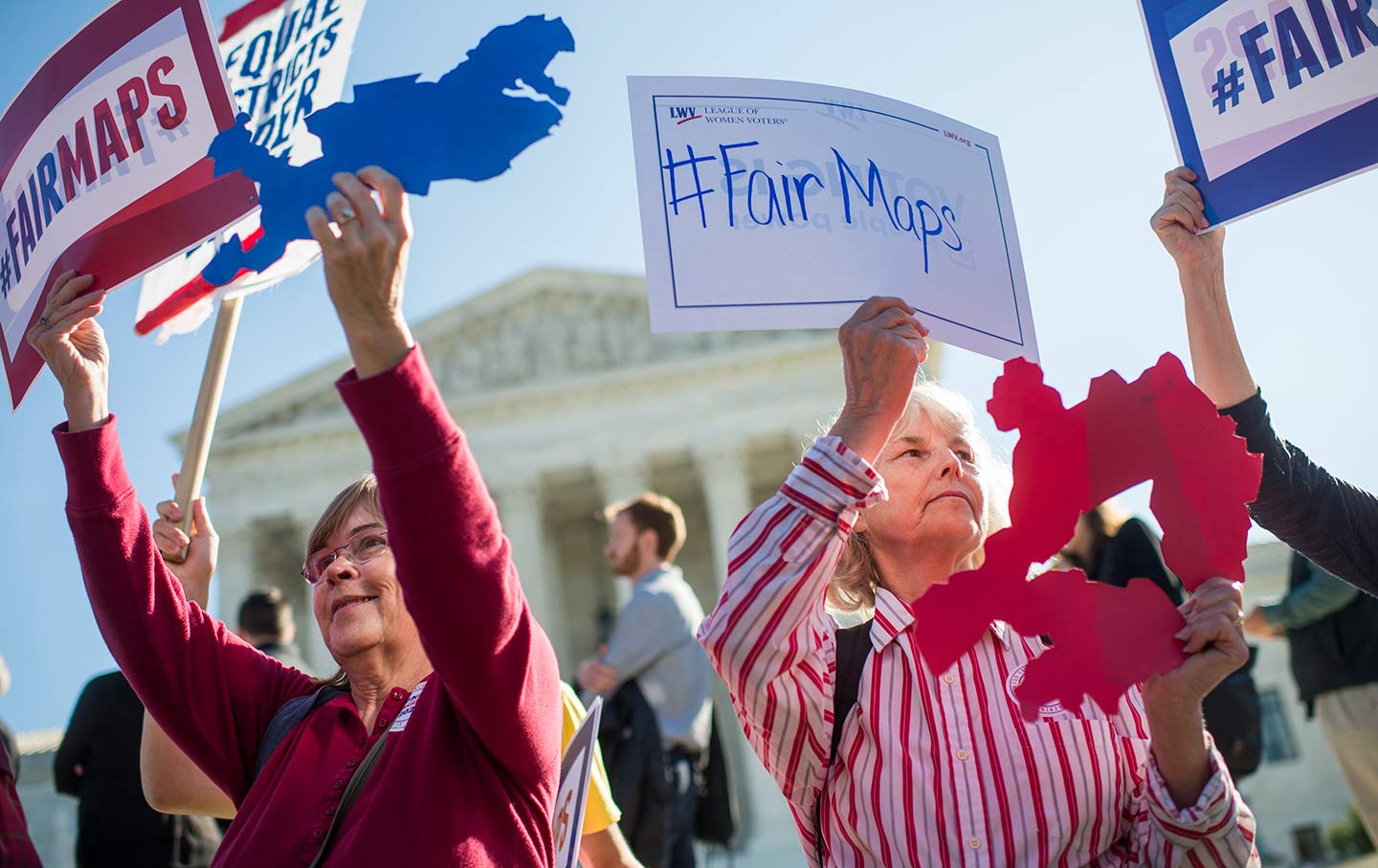 When it became clear that democracy advocates had made a powerful case against partisan redistricting schemes that deny voters real choices—and that prevent the will of the people from defining the character of state legislatures and the Congress—the defenders of the indefensible retreated to the argument that giving power to the people could be… revolutionary.

“Plaintiffs are asking this court to launch a redistricting revolution based upon their social science metrics,” Misha Tseytlin, Wisconsin’s solicitor general, told justices of the Supreme Court on Tuesday, as they heard oral arguments regarding Gill v. Whitford, the most significant challenge to partisan gerrymandering in modern times.

Tseytlin and other defenders of an extreme gerrymandering scheme that was implemented by Wisconsin Governor Scott Walker’s Republican allies in 2011 begged the high court to reject the reasoning of a panel of federal judges who determined Wisconsin’s skewed legislative district lines are unconstitutional. But the legal arguments were so convoluted—and so obviously shaped by partisan enthusiasms rather than democratic principles—that they had a hard time of it. Justice Anthony Kennedy, the key swing vote on the high court, was so unsatisfied with answers from a lawyer representing Wisconsin’s Republican lawmakers to his questions about hyper-partisan maps that he scolded the obfuscating attorney: “I have to say that I don’t think you ever answered the question.”

If Kennedy sides with more liberal members of the court and tips the balance against gerrymandering, that would upset the calculations of some of the most economically and politically powerful players in the country. So the lawyers for the established order were scrambling to convince the court that a decision on the side of democracy would unleash legislative and legal chaos.

Tseytlin and his colleagues attempted the legal equivalent of climate-science denial. They griped about analyses that confirmed the unfairness of the Republican maps and warned against basing a rejection of those maps on data that had been provided to the court. That desperate measure earned a mild rebuke from the bench. “This is not kind of hypothetical, airy-fairy, we guess, and then we guess again,” Justice Elena Kagan said of the data. “I mean, this is pretty scientific by this point.”

Justice Sonia Sotomayor noted that “every single social science metric points in the same direction.” And she was correct. The metrics that so concern Tseytlin and others who attempt to defend gerrymandering simply indicate that, by warping district lines to give themselves overwhelming political advantages, Wisconsin Republicans have effectively denied voters fair elections and representative government. That’s not a particularly debatable point.

In Wisconsin, in the 2012 election that followed the Republican reworking of legislative district lines, Democrat Barack Obama easily won the statewide presidential race, Democrat Tammy Baldwin easily won the statewide U.S. Senate race, and Democratic candidates easily secured the majority of votes cast in races for legislative seats. Statewide, Democratic contenders for the Wisconsin Assembly won 174,000 more votes than Republicans. Yet, Republicans came away from the election with a 60-39 majority in the chamber. Extreme gerrymandering allowed a party that attracted just 46 percent of the vote for Assembly seats to claim more than 60 percent of the seats.

The panel of federal judges that last year determined the Wisconsin lines were unconstitutional recognized that maps of multiple legislative districts cannot produce a perfect reflection of the popular will. But, as the panel’s majority explained, the maps drawn by Wisconsin Republicans were “intended to burden the representational rights of Democratic voters throughout the [10-year] period by impeding their ability to translate their votes into legislative seats.”

The Republicans are not the only guilty party when it comes to gerrymandering. Democrats have used legislative majorities in states where they are dominant to draw maps that benefit their candidates.

Both parties are at the ready to decry the anti-democratic machinations of their rivals. And, as redistricting is increasingly automated, with sophisticated computer programs designed to maximize partisan advantages, the crisis is growing more severe. The lawyer who appeared before the court to argue on behalf of Democratic voters who had been effectively disenfranchised by the gerrymandering of Wisconsin, spoke with a sense of urgency that is grounded in an understanding of the science. (The 2020 Census will provide the basis for the redrawing of legislative and congressional district lines in states across the country.)

“You are the only institution in the United States that can solve this problem just as democracy is about to get worse because of the way gerrymandering is getting so much worse,” Paul Smith explained to the justices.

If the court takes the side of democracy and supports a new approach to drawing legislative district lines that errs on the side of representative democracy rather than partisan hegemony, that will indeed launch a redistricting revolution. While the revolution would start in Wisconsin, it would not end there. Voters in other states would demand legislative elections that provide real competition and real representation. And that demand would almost certainly extend to debates about how to draw congressional district lines.

Entrenched interests are unsettled by this prospect. House Speaker Paul Ryan, R-Wisconsin, who benefits from the gerrymandering of congressional districts across the country (in 2012, Democrats secured 1.4 million more votes for U.S. House seats than Republicans, but Republicans got a 234-201 majority in the chamber) won’t be happy. And there are more than a few Democratic bosses who would be dissatisfied.

So be it. Elections are not supposed to be the playthings of powerful politicians. They are supposed to provide voters with an opportunity to make meaningful choices about which politicians and which parties are empowered. Popular sentiment can be measured by social scientists. But it can only be translated into governance that reflects the will of the people when elections are genuinely competitive.

Redistricting that assures such competition would be revolutionary—so revolutionary that it could revive America’s stagnant politics and usher in a new era of representative democracy.