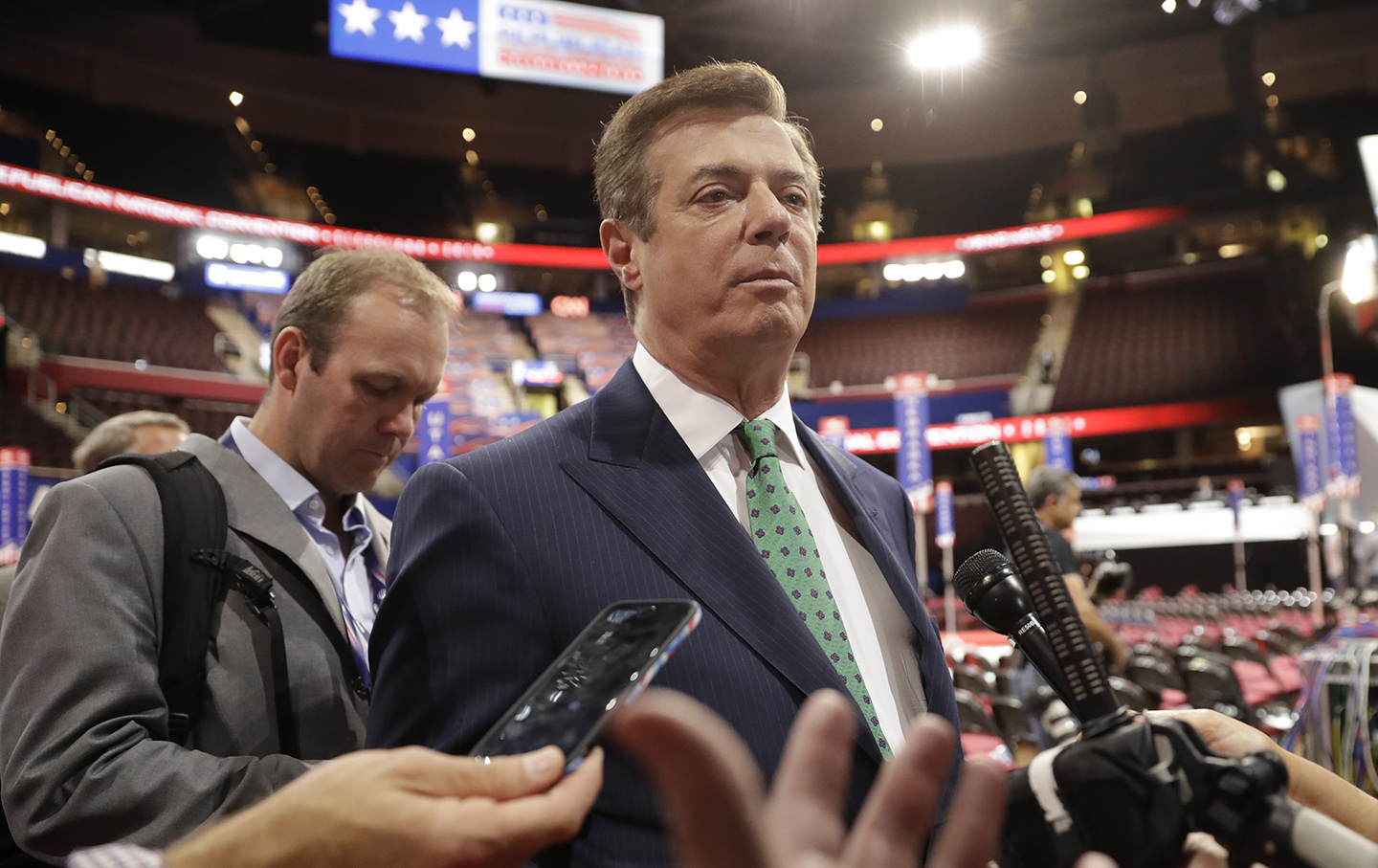 Here’s something we can be fairly certain Russiagate special counsel Robert Mueller is looking at: In the spring of 2016, pretty much out of the blue, Paul Manafort approached Donald Trump’s presidential campaign, offering to be the candidate’s “fixer” during the last stages of the primary and into the GOP convention that summer. Now, we know that Manafort—a political wheeler-dealer with a decades-long track record of pushing ethical boundaries, helping dictators polish their images, and consorting with Russian and Ukrainian oligarchs, as The Nation reported way back in 2008—at that time had an ongoing, years-long connection with a former (or, who knows, perhaps current) operative for Moscow’s military-intelligence agency, the GRU. That is, when Manafort pitched his services to Trump two years ago, he was in regular contact with that ex-GRU official, whose name is Konstantin Kilimnik.

The questions for Mueller are: How witting was Manafort? How witting was Trump? What was the role of Rick Gates, Manafort’s partner, who along with Manafort has been indicted by Mueller on multiple charges of bank fraud and money laundering and is now cooperating with the special counsel’s office? What, exactly, was the role of Kilimnik, who met repeatedly with Manafort and Gates during 2016? And, finally, is the Manafort-Kilimnik relationship the Rosetta Stone that could explain the core of potential Trump-Russia collusion?

Don’t forget, by the early part of 2016, hackers backed by the Russian state had already stolen a vast storehouse of e-mails from the Democratic National Committee, though they hadn’t yet been released. By this time, too, George Papadopoulos, an earnest young Trump aide, had already been told by a Russian-linked operative that Moscow had “dirt” on Hillary Clinton, including “thousands of emails.” And St. Petersburg’s Internet Research Agency, controlled by an oligarch so close to President Vladimir Putin that he’s been called “Putin’s chef,” had already begun to churn out social-media posts designed to undermine Hillary Clinton’s presidential campaign. According to US intelligence agencies, the Russian hackers were under the command of the GRU, the agency out of which Kilimnik emerged.

If Trump Fires Mueller, He Just Might Get Away With It

Is Steve Bannon Trump’s Link to Putin and the European Far Right?

How can we be so sure Mueller is putting these pieces together? Because it’s in recent court documents filed by Mueller & Co. It’s been known for a while that Manafort—who may yet turn state’s evidence and cooperate with Mueller in order to avoid a lengthy prison term—may be the weakest link in the Trump-Russia collusion story. (For an earlier, fairly complete account of his role, at least as far as it was known at the time, see my Nation post last August.) Now, thanks to Mueller’s methodical work, we know a lot more.

First, in response to Manafort’s legal challenge to his indictment—which claimed that Mueller didn’t have the proper legal authority to prosecute in his role as special counsel—Mueller made public a previously unreleased and heavily redacted August 2, 2017, memo from Deputy Attorney General Rod Rosenstein. In that memo, Rosenstein specifically authorized Mueller to examine allegations that Manafort “committed a crime or crimes by colluding with Russian government officials with respect to the Russian government’s efforts to interfere with the 2016 election.” That doesn’t prove collusion, of course, and Mueller may have a lot more pieces of the puzzle to assemble before he can do that. But it does prove that both Rosenstein, who oversees the special counsel’s office, and Mueller believe it could be a significant and fruitful line of inquiry.

Second, we now know for certain that Kilimnik had ties to the GRU (his suspected ties have been reported for years). Last December, in denying bail to Manafort, a motion from the Office of the Special Counsel said that Manafort and a colleague were “ghostwriting an editorial in English regarding his political work for Ukraine.” It added, “Manafort worked on the draft with a long-time Russian colleague of Manafort’s, who is currently based in Russia and assessed to have ties to a Russian intelligence service.” That person, according to The New York Times, was Kilimnik.

Another recent development was the release of the sentencing memo in the case of a well-connected Dutch lawyer, Alex van der Zwaan, who worked on Ukraine with Manafort and Gates. In it, we learned that van der Zwaan lied to Mueller’s office about the fact that as late as September and October of 2016—at the very height of the presidential campaign, for which Gates was a senior official on Trump’s team—Gates had been communicating with Kilimnik, referred to in the document as “Person A.” It adds “that Gates told him [van der Zwaan] that Person A was a former Russian Intelligence Officer with the GRU.” The memo also says, “Federal Bureau of Investigation Special Agents assisting the Special Counsel’s Office assess that Person A has ties to a Russian intelligence service and had such ties in 2016.” (According to the Times, Kilimnik twice traveled to the United States to meet with Manafort. The two men reportedly discussed trying to set up a private briefing on the Trump campaign for a top, Putin-linked billionaire, aluminum king Oleg Deripaska, who was one among seven oligarchs, along with companies they own or control as well as Russian-government officials, targeted with new US sanctions last week.)

Kilimnik is no casual acquaintance of Manafort’s. For 10 years, traveling between Moscow and Kiev, Kilimnik served Manafort as Our Man in Kiev, and the two men have known each other since 2005.

Both Manafort and Gates were indicted by Mueller last October, and were charged in a superseding indictment in February with a lengthy list of financial crimes. They include bank fraud and money laundering, in connection with their work representing the then-pro-Russian government of Ukraine; its president at the time, Viktor Yanukovych; and, later, the post-Yanukovych, pro-Russian Opposition Bloc. Manafort, Gates, and Kilimnik operated throughout this period as a kind of troika on behalf of pro-Russian politicians and oligarchs in both Ukraine and Russia.

Van der Zwaan, who pleaded guilty in February to lying to federal investigators and who’s now cooperating with Mueller, was sentenced last week to 30 days in prison. The Dutch lawyer, who began working with Manafort in 2012 as an attorney with Skadden, Arps, Slate, Meagher & Flom, has important Russian connections of his own: He’s the son-in-law of a senior Russian oligarch himself. Van der Zwaan’s wife, Eva Khan, is the daughter of German Khan (sometimes transliterated as Herman Khan). The senior Khan, reportedly worth more than $9 billion, is the co-founder of Russia’s Alfa banking conglomerate.

Interestingly, Khan and his partners at Alfa, Mikhail Fridman and Petr Aven, show up in the famous “Steele dossier,” the raw-intelligence compilation assembled by former MI6 operative Christopher Steele for Glenn Simpson’s Fusion GPS and published by Buzzfeed in January 2017. One section reports that Khan, Fridman and Aven “are on very good terms with PUTIN,” and that they “continued to give informal advice to PUTIN on foreign policy, and especially about the US where he distrusted advice being given to him by officials.”

Back in 2016, it was the same Alfa Group that maintained a computer server connection of some kind with the Trump Organization’s server in New York, leading Jake Sullivan, Hillary Clinton’s foreign-policy adviser, to call it a “secret hotline.” Investigators and computer-security experts later concluded that the connection might have an innocent explanation, such as marketing spam. Last year, however, CNN reported that the FBI’s counterintelligence division is still looking at the issue and that “the FBI’s investigation remains open.”

So, back to the original question at the top of this piece: Why did Manafort suddenly volunteer to cooperate with (and eventually run) Trump’s 2016 campaign? In a lengthy cover piece this March (“The Plot Against America”) in The Atlantic, Franklin Foer says that the out-of-favor Manafort “smelled an opportunity” as Trump appeared to close in on the nomination. Working through Thomas Barrack Jr., who was very close to Trump for years, Manafort pitched Trump on being hired, even offering to work for free. “Manafort had kept a pied-à-terre in Trump Tower, where he and Trump had occasionally seen each other and made small talk,” reports Foer. It was immediately after he was hired by the Trump campaign that Manafort reached out to Kilimnik and Deripaska.

Manafort may have simply seen the Trump campaign as a vehicle for his own aggrandizement and rehabilitation. But what if Kilimnik, Deripaska, and the GRU were already working through Manafort—whether or not Manafort knew it—to get inside Team Trump? Let’s hope Mueller finds out.